Resistance is futile: "We want Trump!" the RNC crowd yells, as the last whimpers of rebellion are snuffed out

Huge numbers of Republicans didn't vote Trump, but you wouldn't know it watching the delegates cheer for him 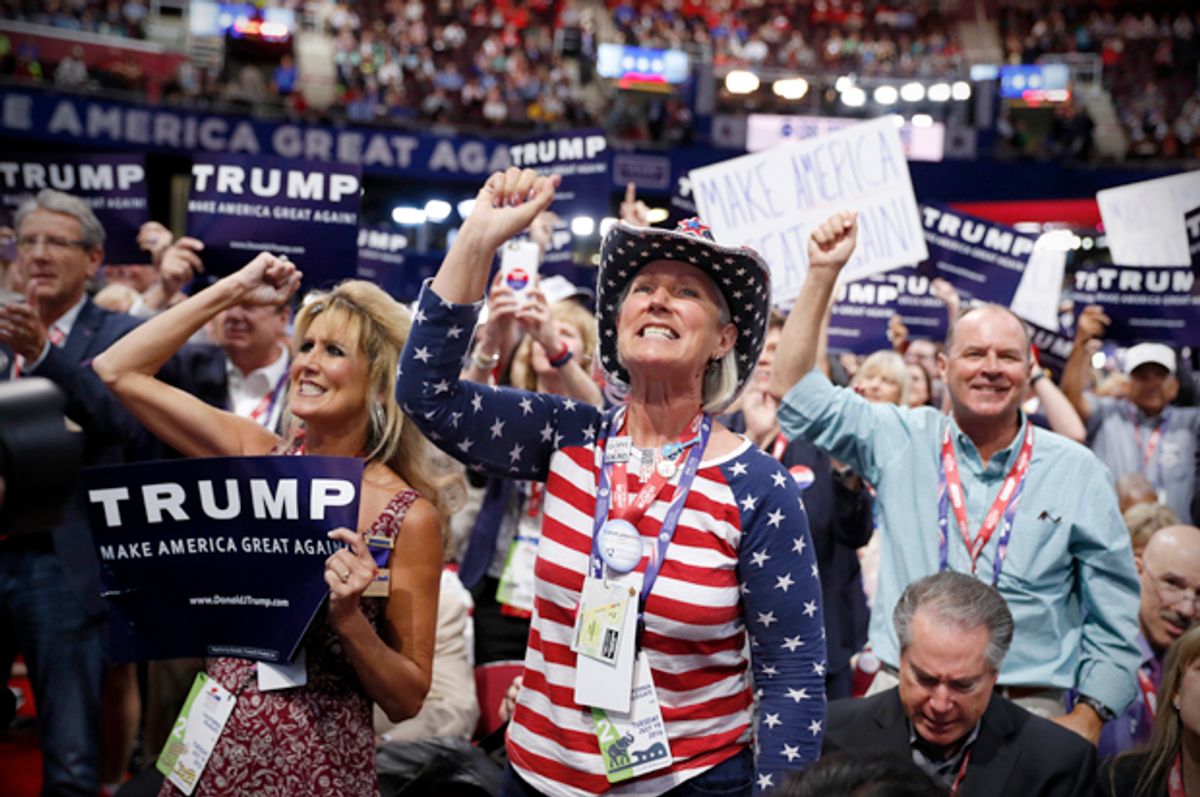 CLEVELAND - Most of us, when confronted with sci-fi stories about mind control like Invasion of the Body Snatchers, like to imagine that we would be the one who would stand up against the groupthink menace, speaking truth to conformity. What this fantasy fails to take into account is how, even if one does see the truth that others deny, the deadening weight of public opinion can squeeze the last remnants of rebellion out of all but the most drama queen-ish among us. When speaking out changes nothing, there’s no real reason to do it.

The Borg doesn’t really need to infect you to own you. It just needs to make it pointless to pretend you are anything but a member of The Borg.

Sitting in Quicken Loans Arena Tuesday, watching the Republicans nominate Donald Trump as their presidential nominee, brought on waves of nausea that were most certainly not caused by the norovirus going around. To watch the amassed crowd of delegates cheer nominating speeches from Sen. Jeff Sessions, Rep. Chris Collins and Lt. Gov. Henry McMaster , one would think Trump had long been the Republican choice by universal acclaim, instead of a highly controversial candidate with the lowest delegate count since the primary reforms of the 70s.

Trump lost a number of primary states and barely eked out a victory in many others, but, barring much of Utah, the state delegations whooped and hollered like Ronald Reagan had risen from the dead to run again. When Collins mentioned Trump's promise to build a wall with Mexico, the crowd went delirious with pleasure.

"We want Trump!" people in the California delegation started chanting during their vote. The cry spread like wildfire across the convention floor.

Even Paul Ryan, who spent much of the primary season making a big show out of his supposed reluctance to board the Trump train, was all enthusiastic smiles.

"Have we had our arguments this year?" Ryan said, briefly acknowledging those, like himself, who resisted being sucked into The Borg.

But now that Dear Leader was in place, Ryan, like all those deliriously cheering delegates, was determined to be a loyal soldier, shouting, "2016 is the year America moves on!"

The crowd of delegates had its fair share of people who loved Trump from the minute their orange-hued hero first called Mexican immigrants "rapists", but there were plenty of delegates there who had not voted for Trump in the primary. Those folks refused to diss the man, however, hastening to assure me that they were fully on board now with a man who has more praise for dictators like Saddam Hussein and Vladimir Putin than he does for Barack Obama.

Even though she is a Ted Cruz delegate, Mary Jane Avery of Texas told me, she is "very excited" about Donald Trump.

"I think I had some questions about him," Patricia Miller of Indianapolis explained on the floor the arena. "But I think those have pretty much been answered. I've been impressed with some of the things I've seen here."

"I'm very impressed with his wife," she added. "He has children that are just excellent. All of his children present themselves so well, are so professional, and they speak so well of their father."

Trump's family came up repeatedly as evidence that he's the wonderful man, and not the wannabe tinpot dictator in a toupee that his detractors keep seeing.

"Another thing I like about Donald Trump is his children," Avery told me. "Those children are so well-mannered and articulate. They have great families. They do well in the jobs, that they've earned and not just been given."

The heavy presence of Trump family members — his wife and all of his children tall enough to reach a podium have been given prime speaking slots at the convention — has raised some eyebrows in the world of political professionals. But the enthusiasm delegates show when speaking of Trump's wife and children suggests that the strategy of dangling the kids out in front of them is working to squelch doubts and rally the troops.

It gives a hint of why campaign chairman Paul Manafort has made such a name for himself by revamping the public image of dictators. He knows exactly what cards to play to mollify public fears that his client is a conscienceless monster.

"Look, his children like him!" might seem, on its surface, to be an unpersuasive argument, but instilling the notion that Trump shares space with people who don't make your skin crawl does a lot to soothe concerns that there's something off about him.

One can find the occasional delegate who can't be bothered to act like they are gung-ho for the guy.

"It wasn't for Donald Trump," Sheila Brown of New Jersey answered when asked who she voted for, "but I'm coming around as well all are, because we have to support the party."

Not exactly a ringing endorsement, but refreshing in its honesty. There are still some Republicans who seem well aware that Trump is not exactly the man you want representing their party.

But what good would it do, at this point, to speak out about him? It would change nothing and only serve to make your time in Cleveland a miserable experience.

You don't need to be assimilated into The Borg to accept its authority. For Republicans, resistance is futile, so just pour a glass of wine and start shouting "We want Trump!" with the rest of them.