The hypocrisy of Paul Ryan criticism: His RNC speech might have been awkward, but did he really have a choice? 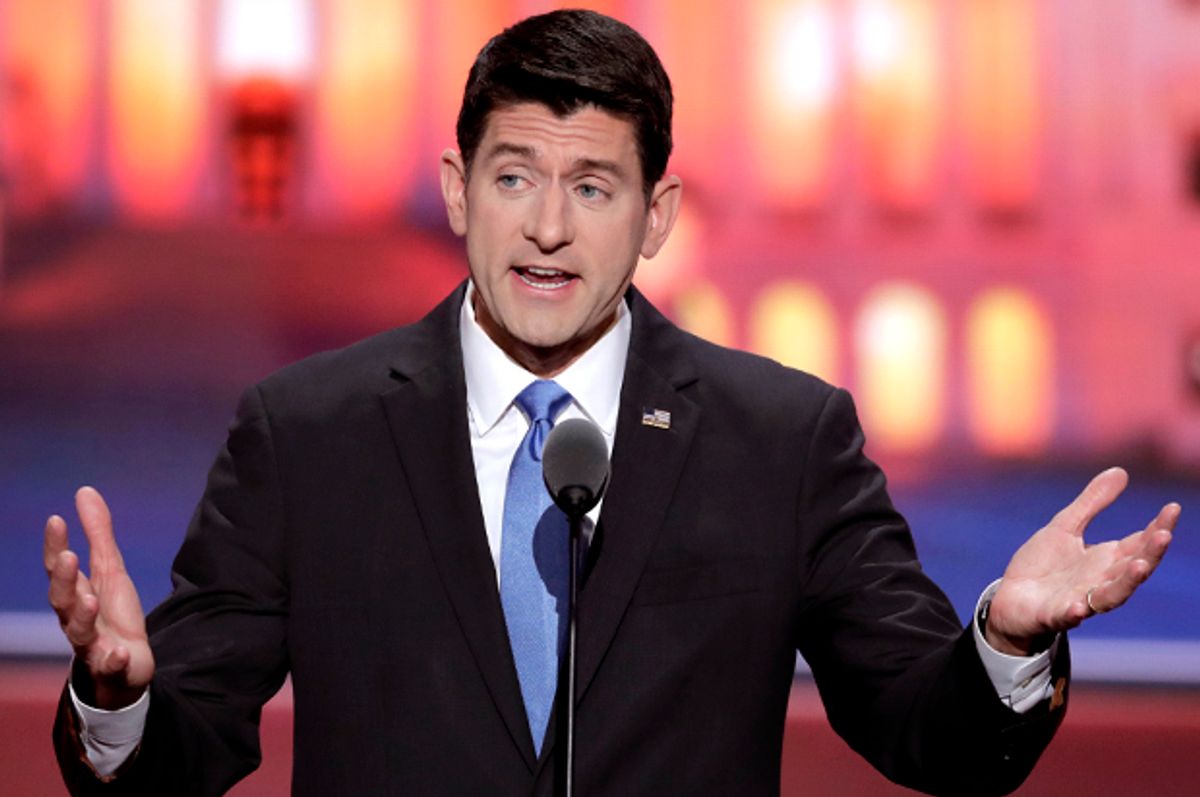 CLEVELAND – Last night here at the Republican National Convention, House Speaker Paul called for a unified Republican front heading into November. He implored party leaders to move beyond a fractured primary and focus on ideas, policy and substance.

Ryan is under fire by pundits on the left and right for backing Donald Trump’s presidential nomination. The New York Times called him a “weak opportunist” and “loser” in an Op-Ed this morning. MSNBC’s Joe Scarborough over the past few weeks has repeatedly hounded Ryan for disavowing Trump’s racist comments while still backing Trump’s candidacy.

While the criticism of Trump and his rhetoric is fair, in light of all other options, Ryan has made an understandable choice. And people among both left and right are not without hypocrisy for their criticisms of Ryan.

On the left, many progressives who backed Sen. Bernie Sanders, including the senator himself, have now fallen in line behind Hillary Clinton. Yet Sanders himself said that Clinton is not qualified for the Oval Office. He said she wasn’t qualified because she voted for the war in Iraq and engages in crony capitalism by raking in serious dollars from Wall Street speeches. Sanders hit Clinton for her “serious problems” with how she handled classified information (which arguably, based on case law, disqualifies her for president). Yet somehow these unsavory traits are suddenly palatable for Bernie and co. Somehow it’s no BFD that Clinton accepted foreign money–without proper approval–while serving as secretary of state. Somehow progressives are willing to forgive the utter incompetence, in the FBI’s own words, of a woman who is “extremely careless” with our national security. For all his innumerable flaws, that isn’t one we can attach to Trump.

Clinton also botched her gimmicky “reset” with Russia and couldn’t empower democracy in the Middle East during the Arab Spring and also failed to grasp the power and potential of the 2009 Iranian revolution. Such foreign policy ineptitude doesn’t bode well for a President Hillary Clinton, and liberals who previously understood this have a severe case of campaign amnesia. Why are these unforgivable traits now nothing but last summer’s evanescent romance?

On the right, it was people like Scarborough who created the beast that is Trump, so their Ryan criticism rings hollow, too. The conservative media constellation was a hotbed of Trump-like rhetoric before the man himself rose to mainstream prominence. Mitt Romney, the 2012 GOP nominee who chose Ryan as his running mate, allowed the creation of The Donald in his current form by refusing to repudiate Trump’s birtherism conspiracies. Because he treated Trump’s 2012 endorsement as a positive instead of a negative, this legitimized Trump’s narcissism. Because Romney didn’t seek to rein in angry 2012 Trump, the negative emotion continued to build and explode in 2016. This year, Romney tried to marginalize Trump, painting him as unfit for office, yet Romney should have done that years ago.

By endorsing Trump, albeit gingerly and not without caveats, Ryan narrowly avoids a Cantoring by angry talk radio grassrooters primary opponent, firebrand Paul Nehlen. And given the absence of a viable, declared third-party candidate (including himself), Ryan’s options were severely limited, and by retaining the speakership, he protects the role from someone far more inflammatory and less policy-oriented. If progressives want to knock Ryan, they’d be even more appalled with his successor, both in the Wisconsin seat and possibly with the Speakership.

Ryan had little choice at this juncture because his party and substantial forces within the grassroots movement of his party sowed the seeds for a triumphal Trump candidacy. What Ryan is doing is mitigating the possibility for future violence and division within the country. If progressives are fearful of the Trump Train’s xenophobia and tribalism, image how much worse it could be without a Ryan there to act as a unifying figure to cool, rather than heighten, the flames? We’ve seen riots and tension at Trump rallies; what if Ryan and other party leaders hadn’t stepped in at this point to block a Chris Christie vice presidential candidacy that would likely have resulted in even more bombast and more anger on all sides?

As unsavory and difficult it is to fathom a Trump candidacy, the American people don’t seem to care that much that Ryan has endorsed Trump. New polling out from Gallup found Ryan “enjoys modestly higher favorable ratings among both Republicans (71%) and national adults (44%) than Ted Cruz and Chris Christie.”

It also was at least somewhat hopeful to receive a Politico article sent by Ryan’s press secretary about Ryan’s new slogan “offering an implicit contrast of Donald Trump’s rhetoric a day after throwing his support behind the presumptive Republican nominee. The slogan: ‘A Better Way.’”

“It’s no secret that he and I have our differences,” Ryan said in his op-ed endorsing Trump. “I won’t pretend otherwise. And when I feel the need to, I’ll continue to speak my mind.”

For the sake of the country, here’s hoping Ryan does direct Trump in A Better Way. And in the meantime, let he or she who is without sin cast the first anti-Ryan Tweet.