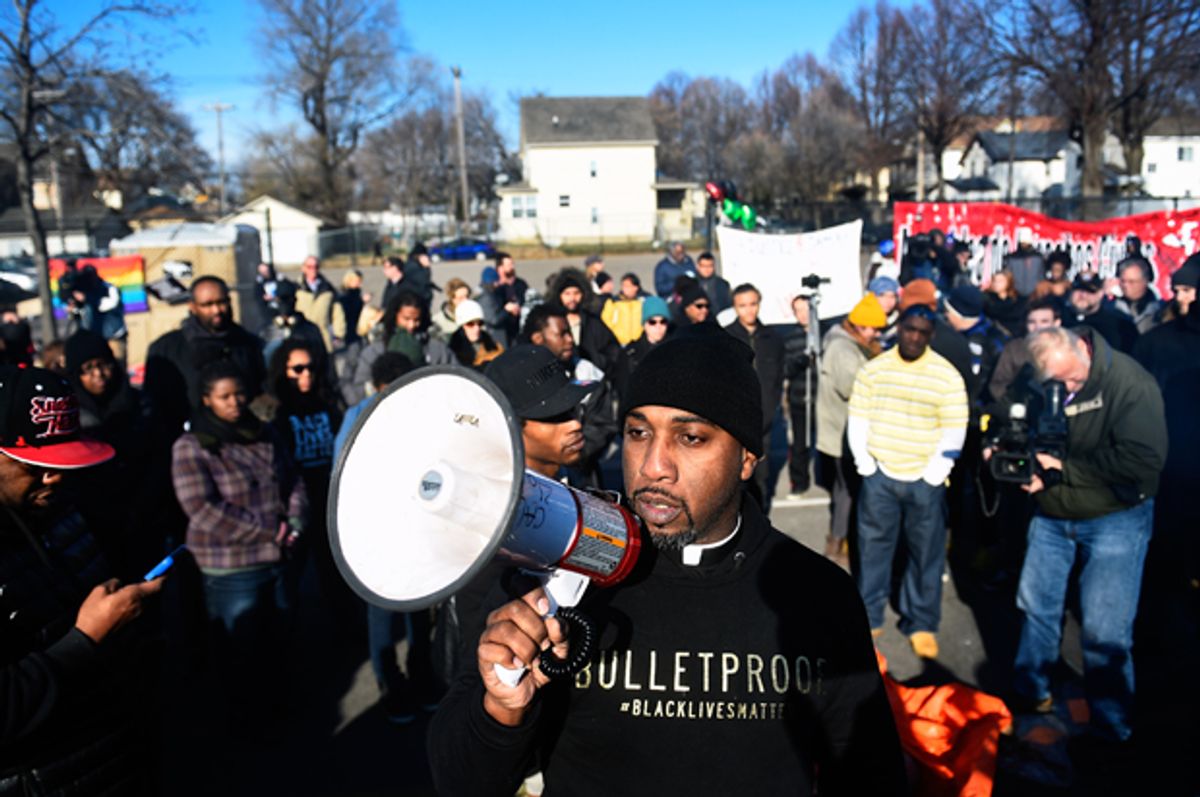 Danny Givens Jr. of St. Paul, Minnesota speaks to a gathering crowd of the group Black Lives Matter before they march to city hall during a protest in Minneapolis, Minnesota November 24, 2015. (Reuters/Craig Lassig)
--

In the wake of the mass shooting that killed five police officers in Dallas, Donald Trump predictably blamed "the WEAK leadership of" President Obama and Hillary Clinton, tweeting, "We are a divided nation!" But he also went after Black Lives Matter. "I would say they're dividing America," Trump told Fox's Bill O'Reilly. "I saw what they said about the police in various marches and rallies, I've seen moments of silence called for for this horrible human being who shot the policemen"—moments of silence that no one else in the known universe has seen.

It's not news that Donald Trump's politics are driven by delusions, or that his delusions are often racist. But Trump was hardly alone in demonizing and attacking Black Lives Matter. Former New York Mayor Rudy Giuliani — a staunch Trump supporter — repeatedly claimed that Black Lives Matter was “inherently racist,”  saying that it “puts a target on the back of police,” and Republican Texas Lt. Gov. Dan Patrick even blamed previous Black Lives Matter protests for the shootings themselves, while the Drudge Report simply announced that “Black Lives Kill,”  and Sean Hannity claimed, "Black Lives Matter is not the answer. They only make things worse because their advancing narrative is killing cops."

Because almost everyone nowadays claims to not be a racist, one also heard disparaging comparisons to the Civil Rights Movement. Of course Bill O'Reilly lectured President Obama on this point, telling him that, “well-meaning activists do not associate themselves with a group that often commits violent acts, and encourages violence through irresponsible rhetoric. Dr. King would not participate in a Black Lives Matter protest.” The GOP's idea of great black lawman agreed. Milwaukee County Sheriff, David Clarke, who began his speech at the Republican convention Monday saying "Blue lives matter" went on to invoke Dr.Martin Luther King as a champion of the rule of law and to denounce Black Lives Matter, calling their demonstrations "anarchy."But even the media's idea of a progressive police chief added his voice to the chorus. NYPD Commissioner Bill Bratton criticized Black Lives Matter, saying protesters should stop “yelling and screaming” at cops about police brutality because it “accomplishes nothing”:

“Unlike the civil rights movement, which focused on the broad needs of desegregation and a segregated country, the needs of jobs, the needs of voting rights, the needs of education, the Black Lives Matter movement has focused entirely on police, and is not engaging in dialogue, instead engaging in protests where there’s a lot of yelling and screaming.”

The underlying assumption here is that the Civil Rights Movement was a Good Thing, and thus must have brought Americans together, and moved us forward. Over a period of decades, there's certainly a core of truth in this notion, despite how far we still have to go. However, polling from the 1960s reveals that the Civil Rights Movement was overwhelmingly less popular than Black Lives Matter is today.

As a benchmark, recent polling on Black Lives Matter by Pew found that “43% support the movement, including 18% who strongly support it. About one-in-five Americans (22%) oppose the movement, and a sizable share (30%) said they have not heard anything about the Black Lives Matter movement or did not offer an opinion.”  Indeed, only white Republicans held a predominantly negative view.

In sharp contrast, the record from the 1960s is consistently more negative, and the early 1960s are particularly instructive because of how consistently non-violent the movement was in the face of violent, sometimes deadly opposition. In 1961, Gallup asked about two high-profile manifestations of the Civil Rights Movement—sit-ins and freedom rides—and found that majorities thought they were much more likely to hurt, than to help.

Sit-ins were first used in August 1939, when African-American attorney Samuel Wilbert Tucker organized one at the then-segregated Alexandria, Virginia, library. This was followed by a number of other sit-ins in the 1940s and 50s, the most notable of which began in Oklahoma City in August 1958, gaining national attention, inspiring others in the movement to follow in their footsteps. But it was two 1960 sit-ins—in Greensboro, North Carolina and Nashville, Tennessee—that put the sit-in movement at the center of national attention, dramatically increasing its power and scope.

The Freedom Rides—a form of nonviolent direct action to desegregate interstate buses in the South—also had an early history: the April 1947 "Journey of Reconciliation," in which an integrated group of 16--eight black, eight white—organized by the Congress of Racial Equality rode public buses through the upper South. The year before, In Morgan v. Virginia, the Supreme Court had struck down segregation on commercial interstate buses as unconstitutional, but outside of the courtroom, nothing had changed as a result, and so the "Journey of Reconciliation" was organized.  Still, virtually nothing changed on the ground up until 1960, when another case, Boyton v. Virginia, reiterated and strengthened the Morgan decision, inspiring CORE organizers to try again. They launched a series of at least 60 Freedom Rides lasting from May through December 1961, which finally forced the Kennedy Administration's hand, resulting in new Interstate Commerce Commission rules specifically outlawing segregation practices.

Both these movements were resolutely non-violent, encountered violent opposition as well as arrest, and were clearly in line with emerging court rulings, finally resurrecting the full meaning of the 14th Amendment. But the public response was significantly more negative than Black Lives Matters faces today. From May 28 through June 2, 1961, Gallup interviewed a national adult sample of 1,502. By more than 2-1 people thought that these actions hurt the chances of integration, rather than helping:

Do you think 'sit-ins' at lunch counters, 'freedom buses,' and other demonstrations by Negroes will hurt or help the Negro's chances of being integrated in the South?

A second question, limited to “those who gave an answer when asked who the 'Freedom Riders' are and what their purpose is”—67% of all respondents—was even more negative:

Do you approve or disapprove of what the 'Freedom Riders' are doing?

Two years late, in June 1963, Gallup got similar results asking about “mass demonstrations,” shortly after such demonstrations had resoundingly proven themselves in the “Birmingham Campaign” of April and May 1963, and contributed to President Kennedy's decision to call for what became the Civil Rights Act of 1964, which he announced in his June 11 nationally televised "Civil Rights Address," in which he first cast civil rights as a moral issue. Despite the overwhelming evidence of how important mass demonstrations were, when Gallup polled people 10 to 15 days after Kennedy's speech, a landslide 2-1 majority said that such demonstrations hurt more than they helped:

The Birmingham Campaign also convinced Civil Rights leaders that it was time for a national action—what became known as the “March on Washington For Jobs and Freedom.”   Shortly before it was held (August 15-20), Gallup polled a national adult sample of 1,588. Asking only those who who had heard about it (71% of all those interviewed), Gallup found only 23% had a favorable impression, compared to 60% unfavorable. Specifically:

What are your feelings about this (proposed mass civil rights rally to be held in Washington D.C. on august  28, 1963)?

The next year, in a poll of of 1,640 adults from May 22-May 27, 1964, when the Senate was still considering the Civil Rights Act, Gallup once again found a landslide majority (more than 3-1) convinced that “mass demonstrations by Negroes” were a bad thing:

What's more, Gallup found almost identical views, expressed in different terms, when it polled an adult sample of 1,550 from October 8-October 13, 1964, after the Civil Rights Act had been signed (on July 2, 1964) but before the demonstrations leading to the creation and signing of the 1965 Voting Rights Act had even begun. Despite all that had been accomplished, and all that clearly still remained, more than a 3-1 landslide majority said that demonstrations should stop:

The summer of 1964 also saw the first wave urban riots, a year before Watts, and pollsters began to ask about them as well. I end my survey here precisely because I want to limit it to the period that is most unambiguously praised today. Yet, in every single poll that was conducted in this period of time, an overwhelming majority of adults were opposed to precisely those actions that changed America, riding it of a past that we're now ashamed to even admit ever existed. Overall, people welcomed those changes. But overwhelmingly, they opposed the very actions needed to bring them about.

We can still see that same level of opposition today—but only if we confine ourselves to looking at white Republicans. To America's credit, today, twice as many people support Black Lives Matter than oppose it—the exact opposite of how opinion lined up in the early 1960s. But, to America's shame, Black Lives Matter is every bit as necessary today as the Civil Rights Movement was back then.  We still have an enormous amount of work to be done to make good on Langston Hughes' oath that “America will be!”