Hemingway drank too much: Our strange, macho romance with Papa's alcoholism

He could write an unsurpassable sentence. But the role alcohol played in his life was mostly ugly 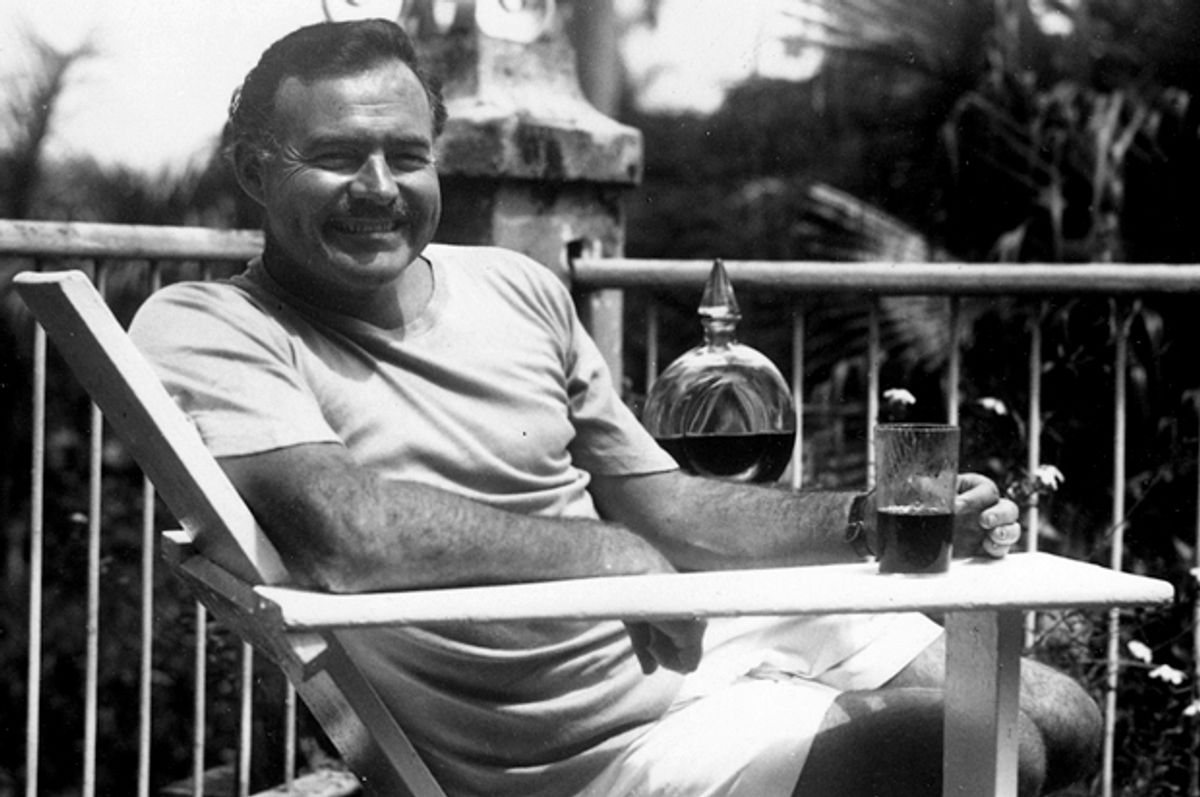 There are plenty of reasons to celebrate Ernest Hemingway, who was once considered perhaps the greatest American writer of the 20th century. His literary reputation has slumped a bit over the last few decades, but he’s still a titan and an author of great influence. Which is why it’s a bit creepy to see some of the birthday notices — he was born on this day in 1899 — championing one of his least pleasant habits: his voluminous drinking.

The author Philip Greene, who has written a well-regarded 2012 book on Papa’s alcohol consumption, “To Have and Have Another,” has an engaging new piece in The Daily Beast.

He also used drinks to express a mood. Take the role of the martini in “A Farewell to Arms”: The protagonist, Frederic Henry, after defecting from his unit in World War I and months of suffering the horrors of war, he longs to feel normal again, to just… tune out. Wearing civilian clothes for the first time in ages, he sits at the bar, sips his drink.

Here’s a quote Greene pulls from the novel:

The martini felt cool and clean… I had never tasted anything so cool and clean. They made me feel civilized. I had had too much red wine, bread, cheese, bad coffee, and grappa. I sat on the high stool before the pleasant mahogany, the brass, and the mirrors and did not think at all.

It’s a passage of both eloquence and understatement: Most of us have been there, one way or the other.

Greene notes that drinking is best done in moderation, and then closes with the recipe for a daiquiri that the burly novelist consumed one day at a Havana bar in 1942 — 17 times. Indeed, Greene's research has fueled many a feature story on Hemingway's drinking —  this article from January tells you how to drink like Papa, while another looks at his "Adventures in Alcohol" and tells you how he liked his martinis. A phrase attributed to Hemingway -- "Write drunk, edit sober" -- is being invoked on Twitter today.

Plenty of people have a healthy relationship to alcohol, and I don’t fault them for craving a drink inspired by a literary figure. Craft beer culture, and mixology, are mostly based on quality, not quantity, and American beers are so much better than what was available 20 years ago that they almost seem like a wholly new invention.

But Hemingway’s relationship to alcohol was almost as bad as Charles Bukowski’s, and much of it was driven not by connoisseurship or camaraderie but by self-destructiveness.

"The manager of the Gritti Palace in Venice tells me," Anthony Burgess wrote in a biography, "that three bottles of Valpolicella first thing in the day were nothing to him, then there were the daquiris, Scotch, tequila, bourbon, vermouthless martinis. The physical punishment he took from alcohol was ... actively courted; the other punishments were gratuitous – kidney trouble from fishing in chill Spanish waters, a torn, groin muscle from something unspecified when he was visiting Palencia, a finger gashed to the bone in a mishap with a punchbag..."

As British journalist John Walsh documents in an article on Hemingway’s suicide:

Ernest went to a doctor in 1937, complaining of stomach pains; liver damage was diagnosed and he was told to give up alcohol. He refused. Seven years later, in 1944, when Martha Gellhorn visited him in hospital, she found empty liquor bottles under his bed. In 1957, his doctor friend AJ Monnier wrote urgently, "My dear Ernie, you must stop drinking alcohol. This is definitely of the utmost importance." But even then, he couldn't stop.

And when the author killed himself with a shotgun, in 1961, it concluded a part of his life that had been full of pain and lots of liquor.

To romanticize Hemingway for his excessive drinking is as stupidly macho as celebrating him for killing wild animals. What Hemingway was best at was writing sentences. His short stories, in particular, will never die. His understatement inspired literary minimalism and the central strain of American detective writing. He wrote better about war than almost anyone. And his dialogue, before it got mannered, was so chiseled and perfect. His personal behavior, especially toward women, could be obnoxious.

But on his 117th birthday, let’s celebrate Hemingway for his prose, not his deeply flawed and often destructive life. I’ll drink to him, but I’ll keep it at one. The Daily Beast piece says that "Hemingway Taught the World to Drink." Let's sure hope not.