Last year, I predicted the GOP would nominate Trump — here is what will happen next

After Trump's defeated, his base will face an energized electorate of diverse Americans who rallied to defeat him 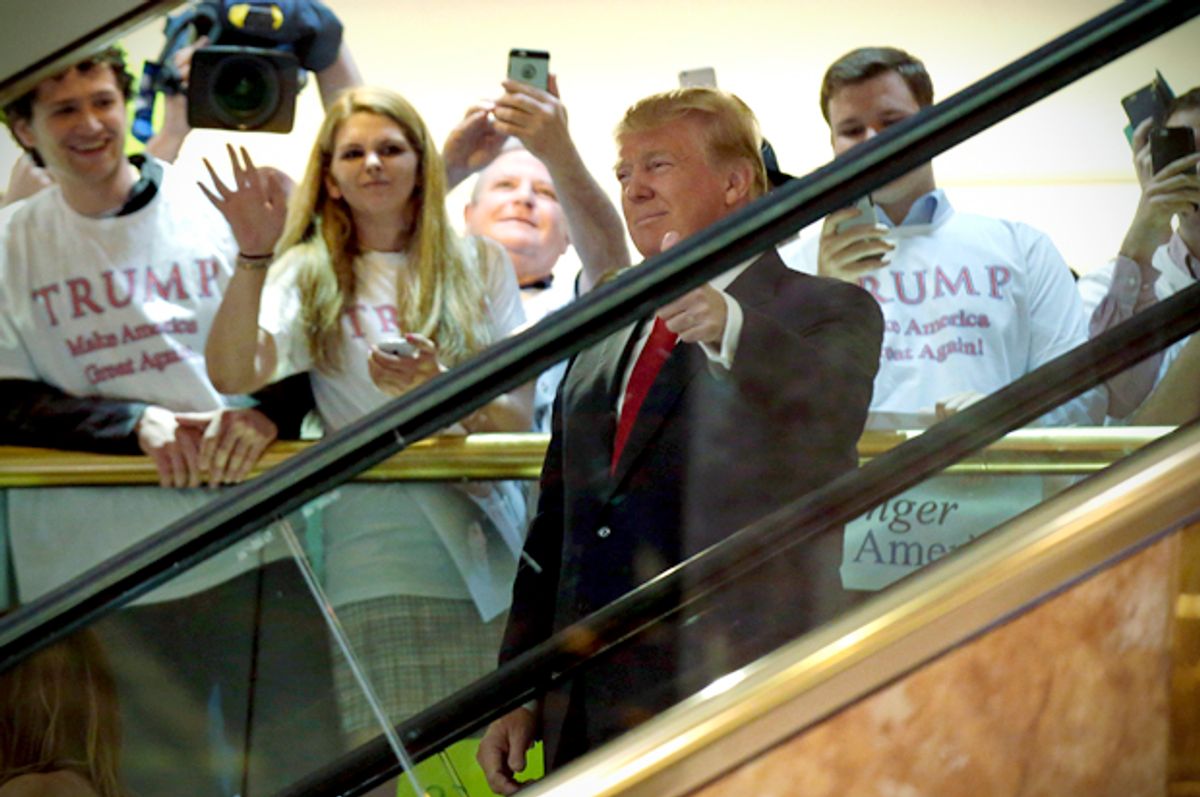 Donald Trump arrives by escalator inside Trump Tower to announce his campaign for the 2016 Republican presidential nomination in New York, June 16, 2015. (Reuters/Brendan McDermid)
--

Last year I predicted that Donald Trump would be the Republican Party’s 2016 presidential nominee. I shared this intuition in my writings here at Salon, my own website, and during various TV and radio appearances. My prediction was met with incredulity, rebuttals that the “data” does not support such a conclusion, and a deeply held belief that the elites and opinion leaders in the Republican Party would never let Donald Trump ascend to power.

My critics were wrong. I would be proven right. On Tuesday at the 2016 Republican National Convention in Cleveland, Donald Trump, the American Il Duce, was officially selected as the party’s presidential nominee. I am not psychic. Nor was my prediction an act of political prestidigitation. The talking heads in the mainstream corporate news media were simply looking in the wrong places for answers.

Beyond the overall weakness of the 2016 Republican field, Donald Trump’s coronation as leader of the GOP can be explained by the following factors.

The Republican Party is the United States’ largest white identity organization; Conservatism and racism are now fully one and the same thing in the post civil rights era; an individual’s level of “old fashioned racism” now determines political party preference; the racist “Southern Strategy’ has guided the GOP for at least 40 years; the election of Barack Obama, twice, drove conservatives into a national fit of bigotry and overt racism.

As documented by Jonathan Weiler and Marc Hetherington, authoritarian values have been increasing among the American people—and conservatives especially—for the last two decades. Donald Trump is a proto fascist. Thus, his policies and personality found a very receptive audience.

White America is facing a symbolic “death” because of changing cultural norms and racial demographics. Simultaneously, the “deaths of despair” (drug and alcohol abuse, suicides) as well as illnesses such as diabetes and heart disease have dramatically increased the literal death rates of uneducated middle-aged white Americans. Donald Trump, with his supposed billions of dollars in wealth, bragging about being “high energy," and promise to “Make American Great Again” is a figurehead who soothes the death anxieties of angry, anxious, and easily frightened white conservatives and Right-leaning independents.

Donald Trump is a reality television star. As such, he is a familiar face for millions of Americans. In an era of austerity, surveillance, a neoliberal nightmare, almost non-existent upward intergenerational class mobility, and broken politics, the fake world of “reality” TV is more comforting than the dystopian present they see in their immediate community and also imagine for their children in the future. His voters have embraced “Donald Trump” the television persona turned political strongman as an outlet for their frustrations and rage.

Donald Trump is a political performance artist who has studied the communication style and narrative tropes of professional wrestling. He used those lessons to vanquish his political rivals and to win over the hearts and minds of Republican voters.

It is estimated that the corporate news media gave Donald Trump two billion dollars in free coverage. “If it bleeds it leads”. The Republican primaries were a disastrous spectacle. Trump was the most entertaining candidate among a crowded field. The Fourth Estate chose advertising revenues over being responsible guardians of democracy.

I will make a second prediction. Donald Trump will not defeat Hillary Clinton in the 2016 presidential election. He lacks the infrastructure and resources to run a proper presidential campaign. Trump is also extremely unpopular among huge swaths of the American public.

However, the presidential race will be much closer than many pundits and other experts are predicting. As I have suggested here at Salon and elsewhere, I am much more concerned about what happens the day after the presidential election than I am about the actual outcome on Tuesday, November 8, 2016.

Republican voters, and movement conservatives, more generally, have been consistently and willfully lied to by their elected officials, news media, and other opinion leaders. As demonstrated by the ghoulish spectacle and human rodeo that is the 2016 Republican convention in Cleveland, American conservatives live in an alternate world which is divorced from empirical reality.

Donald Trump’s political campaign has given further permission to the forces of white identity politics, old-fashioned racism, nativism, xenophobia, misogyny, and bigotry to reassert themselves in American life and politics. After Trump is defeated, his disillusioned foot soldiers will be faced with a mobilized and energized electorate comprised of women, people of color, young people, and others who rallied to defeat their chieftain.

I offer no specific prediction as to what will occur when those two groups encounter one another.

However, I often speak of a reckoning that I believe is coming to American politics. Trump’s defeat in November, and his supporters’ response to it, will be one more step in that direction.