“Star Trek Beyond”: Humor and adventure abound in this course-correcting sequel

The third film in the rebooted series may not go boldly, but it’s a welcome homecoming for the beloved franchise 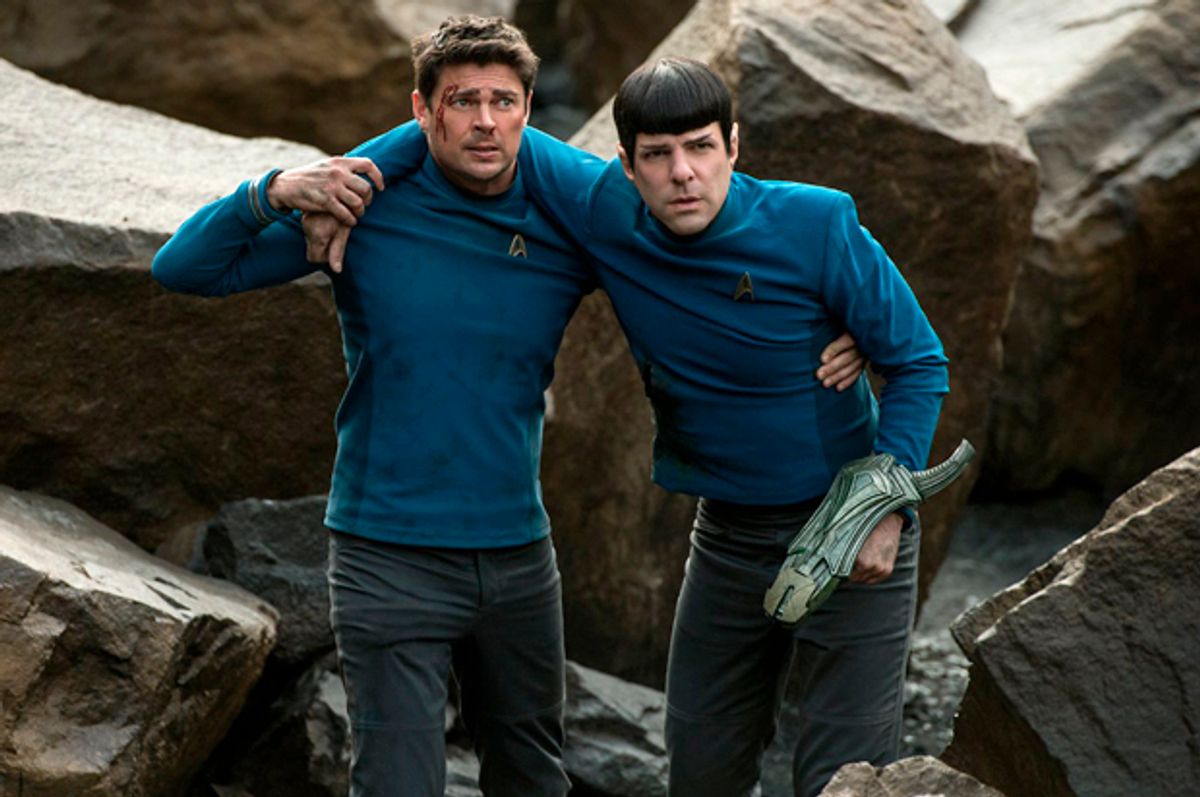 There’s a scene from Jason Reitman’s “Thank You For Smoking” that’s impossible to erase from your mind when watching “Star Trek Beyond,” the third entry in the rebooted film franchise.

Nick Naylor (Aaron Eckhart), a lobbyist for the tobacco industry, is pitching Jeff (Rob Lowe), a Hollywood super-agent who never sleeps, on bringing cigarettes back to the movies. Jeff envisions a science-fiction romance where Catherine Zeta-Jones and Brad Pitt light up in space — in between ravishing each other’s naked bodies, that is. Nick likes the idea, except for one problem: “Wouldn’t they blow up in an all-oxygen environment?” Jeff is prepared for this question. “It’s an easy fix,” he says. “One line of dialogue: ‘Thank god we invented the… whatever… device.”

“Star Trek Beyond” is a movie full of whatever devices, where an outdated ship that crash-landed on a hostile planet a century ago can be easily fixed up with a little TLC and an attack of killer bees is neutralized by blasting the Beastie Boys. The film’s own logic is so casually convoluted that, like Ellen Page in “Inception,” the characters have a way of narrating the action to the audience, just to make sure you’re following along. (You still may not be.)

“Beyond” is the first “Star Trek” film to be penned by Simon Pegg, who co-wrote the cult comedy Cornetto Trilogy (“The World’s End,” “Hot Fuzz” and “Shaun of the Dead”) with his frequent collaborator, Edgar Wright. Pegg’s script is a nonsense, but it is a spirited one, the closest in tone of the recent trilogy to the original “Star Trek” series. Created by Gene Roddenberry, the show was expansive with ideas about man’s existential fate, and subsequent installments only expounded on its philosophical optimism. “It is the struggle itself that is most important,” waxes Data in “The Next Generation.” “We must strive to be more than we are. It does not matter that we will not reach our ultimate goal. The effort itself yields its own reward.”

At the opening of “Beyond,” a sense of fatigue has set in over the Enterprise, and perhaps the films themselves. Kirk (Chris Pine), now three years into his mission to explore the vast recesses of the galaxy, tells his captain’s log that the infinitum of space is both beautiful and despairing: While it means anything is possible, the indistinguishable days turn punishing. “Things have started to feel a little episodic,” Kirk bemoans in a strong monologue that’s often quite pretty.

That kind of self-referential humor permeates “Beyond,” directed by Justin Lin (“Fast Five”) with a sense of rollicking adventure missing from the previous entry, “Into Darkness,” weighed down by dour ballast. “Star Trek Beyond,” more than anything, is designed as a course-correct from the previous film. “Into Darkness” was hampered by its own super-seriousness and an Uhura-Spock romance that felt ripped from a Katherine Heigl movie, but “Beyond” focuses on the real romance of “Star Trek” — the relationships between its crew members.

Spock (Zachary Quinto), following the destruction of his homeland, is contemplating leaving the Enterprise to carry on the work of the recently-deceased Commander Spock (Leonard Nimoy), his alter-ego from another universe. But as his team reminds him, Spock is needed on the ship — especially by Kirk, who wouldn’t be able to function without his right-hand man.

The fraternal banter between the Enterprise crew is the film’s strongest aspect, reminiscent of the jocular energy of Pegg’s earlier screenplays. After Spock decides to part ways with Uhura, he gives her a necklace as a token of his affection. He refuses to take it back, saying it would be against Vulcan custom. It turns out that the stone embedded in the jewelry is not only radioactive but easy to detect via the ship’s scanners. “You gave your girlfriend a tracking device?” Dr. McCoy (Karl Urban) concludes. Spock might be appalled by the suggestion, but he can’t fault the validity of the doctor’s logic.

“Beyond” undercuts the unfortunate sexism of the previous entry (why did Carol take off her shirt again?) by giving the series its best female character in ages: Jaylah (Sofia Boutella), a warrior who seeks vengeance for her people. She also lacks an understanding of basic social graces. Sporting an accent straight out of “The Fifth Element,” Jaylah repeatedly refers to Capt. Kirk as “James T” and sits in his chair — feet up — without asking. Charmingly unpredictable, she’s my kind of vigilante.

Jaylah will get her chance at revenge when the Enterprise is attacked by Krall, a tyrannical despot who commands a swarm of mechanical bees to attack the ship. Like the trio of vampyric models in Nicolas Winding Refn’s “The Neon Demon,” Krall feasts on the young in his quest for immortal life. He purges the Enterprise of its crew, who will be taken hostage and harvested.

Krall is played by Idris Elba, one of the finest actors of his generation. You might remember him from Cary Joji Fukunaga’s “Beasts of No Nation” or “The Wire,” where he portrays a warlord and a gangster, respectively. Both of these men prey on youth in different ways. The Commandant needs child soldiers for his army, while Stringer Bell relies on truant teenagers to run his drug enterprise. While Elba, a fearsome and volatile presence, adds dramatic heft to the role, he is wasted underneath pounds of prosthetics that make him look like Ivan Ooze. (Bryan Singer’s most recent “X-Men” film shared this issue.) The actor is virtually unrecognizable until the final third, where he is finally unmasked.

“Beyond” is undoubtedly messy, like a Starfleet ship that’s taken its fair share of beatings, but it is frequently a reminder of how good the series can be when all its engines are in working order. Opening a box left behind by Commander Spock, Spock the younger finds a photo of the original crew. That nostalgia, both for its source material and time gone by, is both reverent and earned. Given the losses of both Nimoy and Anton Yelchin, who plays Chekhov, since the previous feature, it’s hard not to share the film’s wonder as the destiny that awaits us all.

The film may not go boldly, but it’s a welcome homecoming for the beloved series.