An alternate universe in Cleveland: What America just witnessed was a shared psychotic disorder 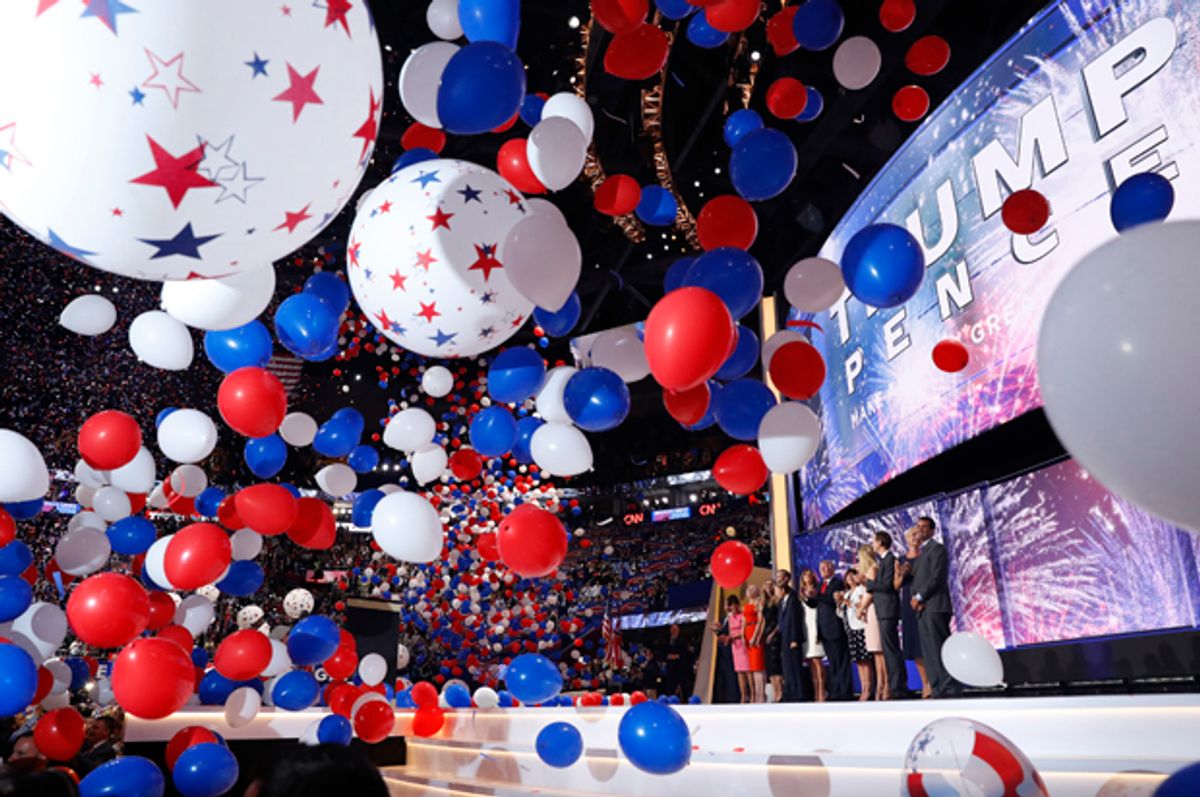 There was political infighting. Melania Trump’s speech stole from Michelle Obama’s convention speech in 2008. Police and security guards appeared to outnumber the protesters. Gun fetishists paraded outside the venue. The “Alt-Right” wallowed in misogyny, sexual paraphilias, and conspiracy theories. The featured speakers included an avocado baroness. Lucifer was invoked. Violent threats were made against Hillary Clinton. Attendees were told that Barack Obama hates America and wants to destroy it from within. Apparently, illegal immigrants and Muslim terrorists are conspiring to kill white people. The Black Lives Matter movement is leading an armed rebellion against the police and “the (white) silent majority.” America is doomed. Only Donald Trump and the Republican Party can save it.

There are multiple audiences for a political convention. How these audiences process the event is one of the keys to electoral victory. Thus the question: What message did the 2016 Republican National Convention communicate to the American people?

For the most part, right-wing ideologues, Tea Party members, and Fox News viewers were validated and comforted. There were many millions of people watching at home who were likely left confused and befuddled. And there were also many other viewers who most certainly felt personally attacked and insulted by the type of white identity politics—with its dog whistle and overt bigotry—on display during the four days of the Republican National Convention in Cleveland.

To my eyes, it was a disgusting spectacle which undermined the claim that American democracy is somehow “exceptional.” In all, the 2016 Republican National Convention was a coronation for a proto fascist, an event which could have taken place in a banana republic or the alternate reality of the movie Idiocracy as opposed to the “greatest democracy” on Earth.

Richard Hofstadter's important work on “the paranoid style” is often cited in discussions of the Republican Party in the Age of Obama. Hofstadter also contributed powerful insights which can be used to make sense of the extreme polarization, zealotry, and revanchism that has taken hold over today’s Republican Party.

Hofstadter suggested that movement conservatism is actually a type of political religion. Writing at History News Network, Robert Toplin explains this as:

Historians and pundits often refer to Hofstadter’s ideas about the “paranoid style.” Much-overlooked, however, is a sub-theme in Hofstadter’s writing. That discussion focused on the emergence of “fundamentalism” in American politics. Individuals who seek a broader understanding of the present political standoff in Washington may find Hofstadter’s judgments thought-provoking.

Richard Hofstadter recognized that evangelical leaders were playing a significant role in right-wing movements of his time, but he noticed that a “fundamentalist” style of mind was not confined to matters of religious doctrine. It affected opinions about secular affairs, especially political battles. Hofstadter associated that mentality with a “Manichean and apocalyptic” mode of thought. He noticed that right-wing spokesmen applied the methods and messages of evangelical revivalists to U.S. politics. Agitated partisans on the right talked about epic clashes between good and evil, and they recommended extraordinary measures to resist liberalism. The American way of life was at stake, they argued. Compromise was unsatisfactory; the situation required militancy. Nothing but complete victory would do…

Here, then, is the significant marriage between practical politics and a fundamentalist-style political religion. Republican intransigence in clashes over Obamacare, budgets, and debt ceilings may reflect smart politics from the radical Right’s point of view. Militant conservatives in Washington can succeed in channeling the base’s anger while also boosting their political careers. They treat political fights in Washington like holy crusades and are generously rewarded for their militancy in conservative voting districts.

After watching the ghoulish 2016 Republican National Convention in Cleveland, it is increasingly clear that Hofstadter’s belief that conservatism is a type of political religion is inadequate to explain the events that transpired there this week.

The Republican Party, its media, and public are suffering from a political version of shared psychotic disorder (Folie a Deux).

Psych Central explains the symptoms of this disorder:

The essential feature of Shared Psychotic Disorder (Folie à Deux) is a delusion that develops in an individual who is involved in a close relationship with another person (sometimes termed the “inducer” or “the primary case”) who already has a Psychotic Disorder with prominent delusions.

The content of the shared delusional beliefs may be dependent on the diagnosis of the primary case and can include relatively bizarre delusions (e.g., that radiation is being transmitted into an apartment from a hostile foreign power, causing indigestion and diarrhea), mood-congruent delusions (e.g., that the primary case will soon receive a film contract for $2 million, allowing the family to purchase a much larger home with a swimming pool), or the nonbizarre delusions that are characteristic of Delusional Disorder (e.g., the FBI is tapping the family telephone and trailing family members when they go out).

Usually the primary case in Shared Psychotic Disorder is dominant in the relationship and gradually imposes the delusional system on the more passive and initially healthy second person. Individuals who come to share delusional beliefs are often related by blood or marriage and have lived together for a long time, sometimes in relative social isolation. If the relationship with the primary case is interrupted, the delusional beliefs of the other individual usually diminish or disappear.

Shared psychotic disorders can also happen in groups of people who are closely involved with a person who has a psychotic disorder (called folie à plusiers, or "the madness of many"). For instance, this could happen in a cult if the leader is psychotic and his or her followers take on their delusions.

At its core, shared psychotic disorder involves the creation of an alternate world that exists outside of empirical reality. This is the Republican Party en masse. Its base tenets include such lies as tax cuts on the wealthy create economic growth for all people, global warming does not exist, institutional racism is a myth, there is a “war” on Christians, white people are oppressed, evolution is just a myth or theory, and America was founded as a “Christian nation.”

Donald Trump is the perfect leader for a political party where lies are treated as sacred truths. For example, he led the slanderous racist “Birther” campaign against Barack Obama. Trump has also been judged by fact checkers to be one of the most dishonest politicians in recent American political history.

The health of a democracy is tied to its ability to resolve political disputes by finding a consensus that respects the interests of the parties involved, is mindful of existing political institutions, and operates within a framework bounded by shared norms and values. The health of a democracy is also dependent upon how various interest groups, publics, elected officials, and leaders find ways to work together—while still pursuing their own goals—with an understanding that they should preserve the ability to find common ground in the future.

This model of normal politics was fractured by Republicans during the Clinton years. It was broken by “mainstream” Republicans and the most extreme wing of the conservative movement during the Age of Obama. The shared psychotic disorder and mass psychosis that has possessed the Republican Party at present makes it impossible for the country’s leaders to conduct normal politics. Political madness rarely if ever engenders civic virtue.

Normal politics is now on life support in America; if normal politics dies it was the Republican Party and its news entertainment media that killed it. The nomination of Donald Trump, a man who is a proto fascist, racist, nativist, strongman, demagogue, and professional wrestling political performance artist, is the dirt being thrown on the casket.