Colbert goes After Trumpiness: His live RNC coverage revives the comedy of “The Colbert Report”

This week, Colbert brought back one of the most formidable satire forces in our nation’s history 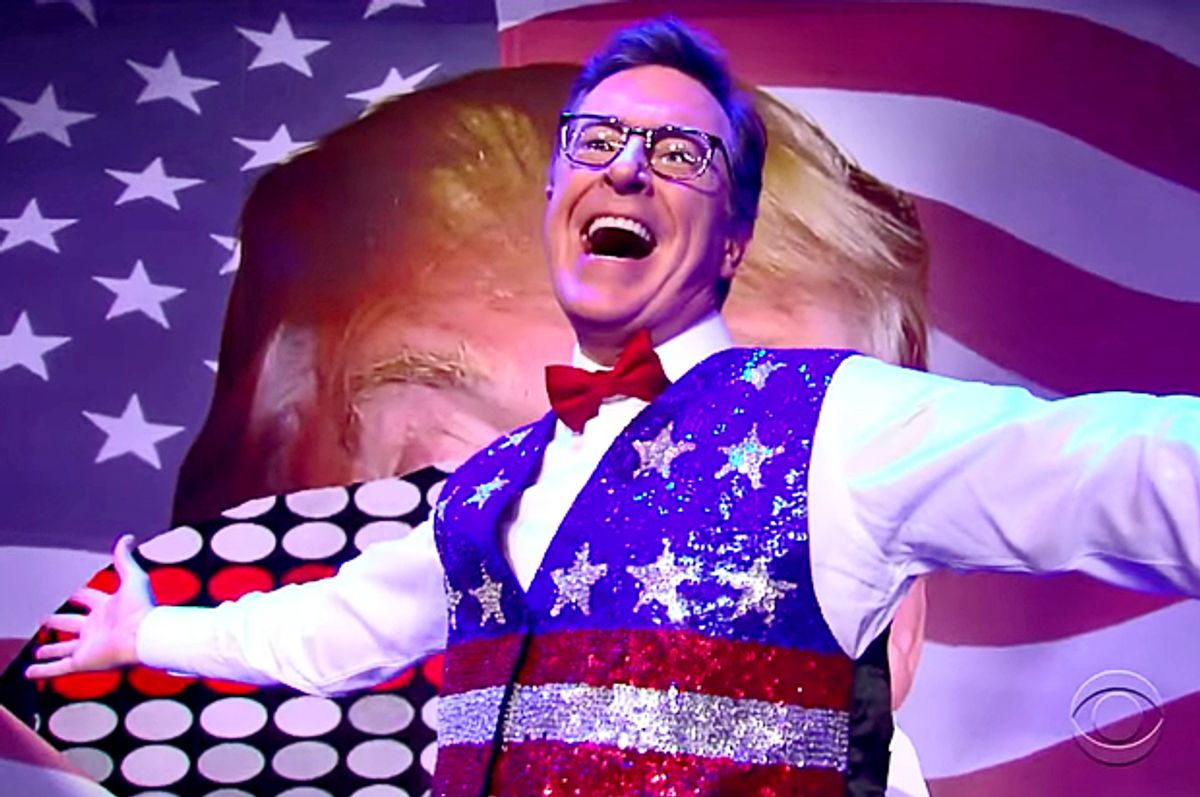 Jon Stewart’s “The Daily Show” and Stephen Colbert’s “The Colbert Report” were satire legends. Together Stewart and Colbert intervened into U.S. political life numerous times: They held a rally on the National Mall, ran a Super PAC,influenced legislation, and educated their viewers better than any cable news station.

For the first time in U.S. history we had two satirical comedians who were not just offering their audiences entertaining relief from folly and vice; they were shaping political discourse. Not only were they more trusted than many top journalists; they were more revered.

So it was no surprise that their fans expressed deep worry that we would head into the 2016 elections without their Comedy Central shows.  Even though both comedians stepped down from their posts at Comedy Central, Colbert fans could at least take solace that he would move over to CBS to host “The Late Show."

While Colbert fans were relieved that their “hero” would still be on air, there was much about “The Late Show” that differed from “The Colbert Report.” First, and most significantly, Colbert put his satire persona to bed.  On “The Colbert Report” he played a right-wing bloviating pundit, which meant that all of his satire was delivered in-character.

The character offered Colbert a unique opportunity to speak truth to power, which is exactly what he did in his epic performance at the White House Correspondent’s Association Dinner in 2006 when he roasted George W. Bush to his face.  Out–Bushing Bush, Colbert didn’t criticize the president; he loved him.  Colbert gushed at how Bush staged photo opps, ignored public opinion, and went to war without any good reason.  Offering the U.S. public the most sustained public criticism of the president, Colbert’s roast was one of the most significant moments in U.S. satire history.

Fans of “The Colbert Report” worried that with the loss of the character, Colbert wouldn’t be able to deliver the same satire bite.  Added to that was the reality that the show would now cover one hour / five nights a week and would air on a big three network.

Everyone was right to worry that the Colbert move to CBS would shift his comedy. The new format, the loss of the character, and the big three network vibe has, indeed, softened Colbert’s satire bite.  The more mainstreamed Colbert has offered less viral videos and created less of a public stir.  He has, however, still had some excellent zingers and some epic interviews, most notably the one with Ted Cruz.  So he hasn’t lost his satirical force.  It just comes packaged within more traditional late night comedy.

As we have watched the ascendancy of Donald Trump and the crowning of Hillary Clinton, it has been hard not to wonder what would have happened this election cycle if we still had Colbert and Stewart on Comedy Central delivering a daily dose of satirical punch.

Well this week Colbert’s “The Late Show” gave us a taste of what we had been missing.

Announcing the fact that his show would run live during the RNC, Colbert told fans “Tune in for a mockery of our political system, and then watch “The Late Show.”” Delivered with trademark Colbert charisma, the line was sharp in its attack and cathartically hilarious.

The fun began with Colbert taking one of the new personas he developed for “The Late Show”—his version of The Hunger Games’s Caesar Flickerman -- to the RNC.  In keeping with some of his most successful “Colbert Report” comedy, Colbert inserted his comedy into a public space. Reviving some of the same humor we saw when he ran for President (twice) or interviewed Congressional members on “Better Know a District,” Colbert had a witty exchange with a Telemundo reporter and NBC’s Chuck Todd.

The best part came when he went to the podium to announce the start of the "2016 Republican National Hungry for Power Games".  Just as he was speaking of the “alliance” Trump had formed with Governor Mike Pence, a guard appeared to remove him.  Colbert then quipped: "Look, I know I’m not supposed to be up here. But let’s be honest, neither is Donald Trump."

The video of the stunt went viral.  The closing line was a simple joke, but it was exactly the sort of witty irony that made Colbert famous. It was an excellent example of how satire can point out an obvious reality that has been distorted so badly that the public has lost sight of it.

The stunt at the RNC was just the tip of the iceberg, though.  On the first night of live RNC coverage Colbert told viewers that we all needed to understand how exactly we got to a place where Trump was the Republican nominee. He then brought back the two men who could help make sense of it all: Stewart and Colbert (in character).  Finally the dynamic duo from Comedy Central was coming to the rescue!

The piece was both massively nostalgic and intensely sharp.  Stewart is incredulous that Jeb Bush is not the nominee, so incredulous, in fact, that he spits in Colbert’s face – twice.  Astonished at the news, Stewart goes back into his secluded cabin only to emerge with the Colbert of “The Colbert Report.”  All it takes is for in-character Colbert to offer his signature raised eyebrow for the crowd to feel that help has finally arrived.

In-character Colbert then enters the Ed Sullivan Theater to the tune of Yankee Doodle Dandy.  Reminding viewers that one of the key features of his pundit persona was his love of Americana and his excessive patriotism, he gets the stage manager to change the background to the American flag.

As if all of this were not enough to send his fans happily down memory lane, in-character Colbert revived his most loved recurring segment from “The Colbert Report” – “The Word” –a segment where he would perform a monologue about a word, while text appeared on the right to offer mockery, insight, or more ironic wit.  This time the word was “Trumpiness” a direct play with “Truthiness”-- the word that Colbert launched on his premiere episode of “The Colbert Report.”

"Just to remind you, 11 years ago, I invented a word: truthiness. You see, truthiness is believing something that feels true, even if it isn't supported by fact. … Truthiness has to feel true, but Trumpiness doesn't even have to do that. In fact, many Trump supporters don't believe his wildest promises, and they don't care."

Using facts to offset irrational beliefs, Colbert went on to cite a recent report that showed that many Trump supporters don’t even believe his promises.

"If he doesn't ever have to mean what he says, that means he can say anything …Here's the deal: Truthiness was from the gut, but Trumpiness clearly comes from much further down the gastrointestinal tract."

In a perfect bookend to the way Colbert used “Truthiness” to describe the retreat from reality that characterized the Bush presidency, Colbert now declared that we live in the era of “Trumpiness.”  For Bush, truth came from the gut. For Trump, truth comes right out of his ass.

The key is that in the Bush era of “Truthiness” there was still a chance that the public cared about the actual facts. Now in the Trump era, his fans have no interest whatsoever in the truth. They can learn that their candidate’s statements are only true or mostly true 12 percent of the time and simply not care.

Even though those same criticisms have been leveled at the Trump candidacy by the media, there is a significant difference when the attacks come from a comedian like Colbert.  Because Colbert makes the jab using irony, because Colbert does not speak literally, the audience has to think through the claim in a wholly different way.  When the brain translates the meaning of ironic comedy — it literally gets smarter and becomes more engaged.

But, even better, because the comedy of “Trumpiness” is coming from one of our nation’s satire icons, it packs a special punch.  By comparing Trump to Bush and highlighting that Trump is measurably worse, Colbert’s “Trumpiness” offers the public a much-needed vocabulary for thinking through the crisis of this election.

It’s aim isn’t to sway a Trump supporter over to the side of reason; instead, its goal is to arm those opposing Trump with the critical skills they need to fight to restore our nation’s sanity.  When critical thinking is under siege and mob mentalities rule, satire is an essential remedy to political catastrophe.

The growth in satire is directly proportional to the growth in political crisis.  The more folly and farce in society, the more there will be parody and mockery of it.  This election season we have had a full menu of satirists — from John Oliver to Samantha Bee to Larry Wilmore and Lee Camp, to name only a few.  Their comedy has helped us to see the degree to which our political system has become a joke.

And now Colbert has brought back one of the most formidable satire forces in our nation’s history. With over 1 million views on YouTube alone, Colbert’s “Trumpiness” intervention is exactly what we need this election.

But is it enough?  The answer is that it's too soon to tell.

Satire might emerge in moments of social crisis, but all it does is point out folly in a smart way.  It can’t fix the problem; it can only make it really clear that we have one.