The Cruz-Trump brawl: The whole drama smells like a rigged scene right out of WWE wrestling 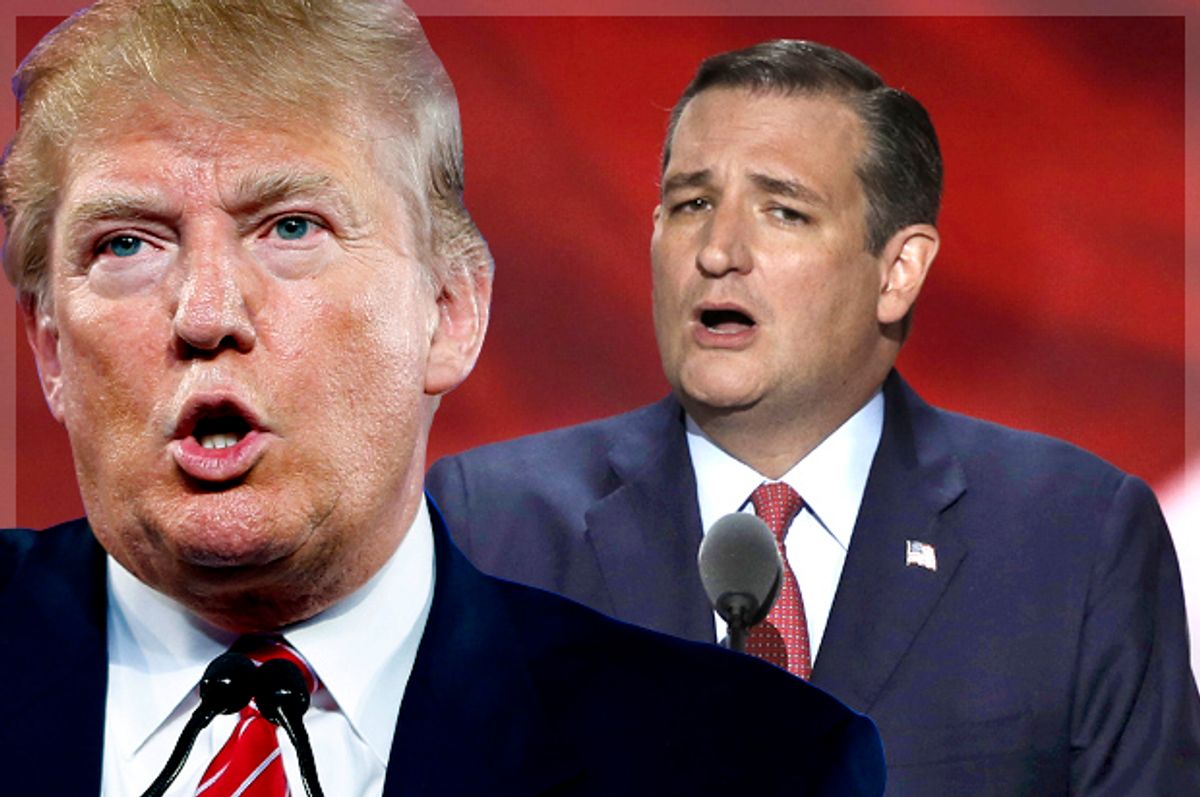 CLEVELAND -- While it’s commendable that Sen. Ted Cruz urged his fellow Republicans to “vote your conscience,” Cruz’s past embrace of Donald Trump and the GOP nominee’s penchant for drama make the whole scenario suspect. It’s less likely that Cruz refused to endorse for his own principles so much as political expediency, and Trump’s long, sordid history of gimmicks and showmanship suggest Trump may have been in on the drama.

As was the case with both the mainstream and conservative media establishment figures, early in the campaign, other Republican candidates like Jeb Bush criticized Trump while Cruz engaged in a bromance, flattering the billionaire on Twitter and elsewhere. Cruz also backed up Trump on protectionist trade policies. Cruz would have more credibility if his track record wasn’t looking out for Cruz and Trump. To some degree, Cruz helped embolden a Clinton donor who is the most liberal nominee in party history.

Later in the campaign, Cruz was one of the last GOP challengers to attempt to rein in Trump, despite Trump’s prior attacks on POWs, the disabled, women Mexicans, and more. It was only later when the field narrowed and things became personal--Trump questioned Cruz's citizenship, insulted Cruz’s wife and accused his fathering of plotting to kill JFK--that Cruz suddenly saw Trump for what he is: a policy lightweight and a bully.

A counterfactual: what if the situation was reversed? This spring, Trump took back his pledge to support the eventual nominee, and it’s unlikely he wouldn’t have backed Cruz as the nominee (or Jeb Bush, Marco Rubio, John Kasich). Team Trump decimated his opponents, thus losing at The Art of War, and now cites the supposed rulebook for political expediency.

Yet the Cruz speech drama might very well be simply vintage Trump entertainment. Trump reportedly called Cruz two days before the speech, and Cruz told him he couldn't endorse. So why would Trump still extend the invite to speak? The scenario smells like a rigged scene out of WWE wrestling, where one night you’d have Hulk Hogan win, another night The Rock. It’s all about the ratings.

Trump’s own wife said in her speech, “It would not be a Trump contest without excitement and drama." The campaign knew something was brewing and/or very well could have orchestrated it. Trump entered the stage rapidly after the boos against Cruz started. Was he simply an innocent bystander backstage immediately prior? Hardly.

GOP planning officials and the Trump campaign approved Cruz's prepared remarks, which were emailed to the press an hour before delivery, and Cruz didn't deviate from the script. Team Trump also whipped up the crowd into booing after Cruz uttered the conscience phrase. Why would they be whipping a crowd rather than immediately moving to escort Cruz offstage?

As Michael Kruse writes in POLITICO, Trump is no stranger to bad publicity. Did it hurt Trump to have a rival question him in his own coronation? Not necessarily, per Kruse:

On the short list of Trump's most guiding, abiding beliefs, this is one that ranks near the top: that bad publicity doesn't have to be avoided, and doesn't have to be endured-that it should be embraced, and even stoked. It's possible to see Trump's whole campaign as a structure built on colossal missteps, statements that would have torpedoed all other candidacies but have buoyed Trump's simply by keeping his name in the news.

For the Trump campaign to publicly shame Cruz seems disingenuous, especially given Cruz’s track record of doing things like shutting down the government without regard for shame. The scenario seems so perfect for them both. Cruz, the early fanboy of Trump, managed to do something that had not yet been done: unite delegates behind Trump.

Having Cruz treat Trump this way at Trump's convention could go a long way in generating sympathy for Trump. As a friend pondered, perhaps at a meta level, the Trump campaign was trying to create the illusion that Trump is not treated fairly. This happened throughout the campaign, Trump as victim of a rigged delegate and media system, a feeling with deep resonance among Trump fans who feel that global elites have not treated them well in our globalized economy.

Trump winning the White House isn’t dependent on Cruz's half-hearted endorsement. In his speech, Cruz was civil, congratulating Trump and ignoring prior spats. By telling the party faithful to vote their conscience, he was giving catharsis and validation for many voters who feel conflicted in this election. By expressing and embodying their conflict yet still telling them it’s OK to come out and vote, he could be protecting down-ballot Republicans from voters sitting home.

Cruz’s speech has elements of a Rorschach test: his detractors found it repugnant and self-promoting, his admirers adored his principled courage. And journalists got to spill lots of ink and airwaves on the drama. A win-win for everyone. Except for the future of our country as Trump inches one step closer to turning the White House into Barnum & Bailey.