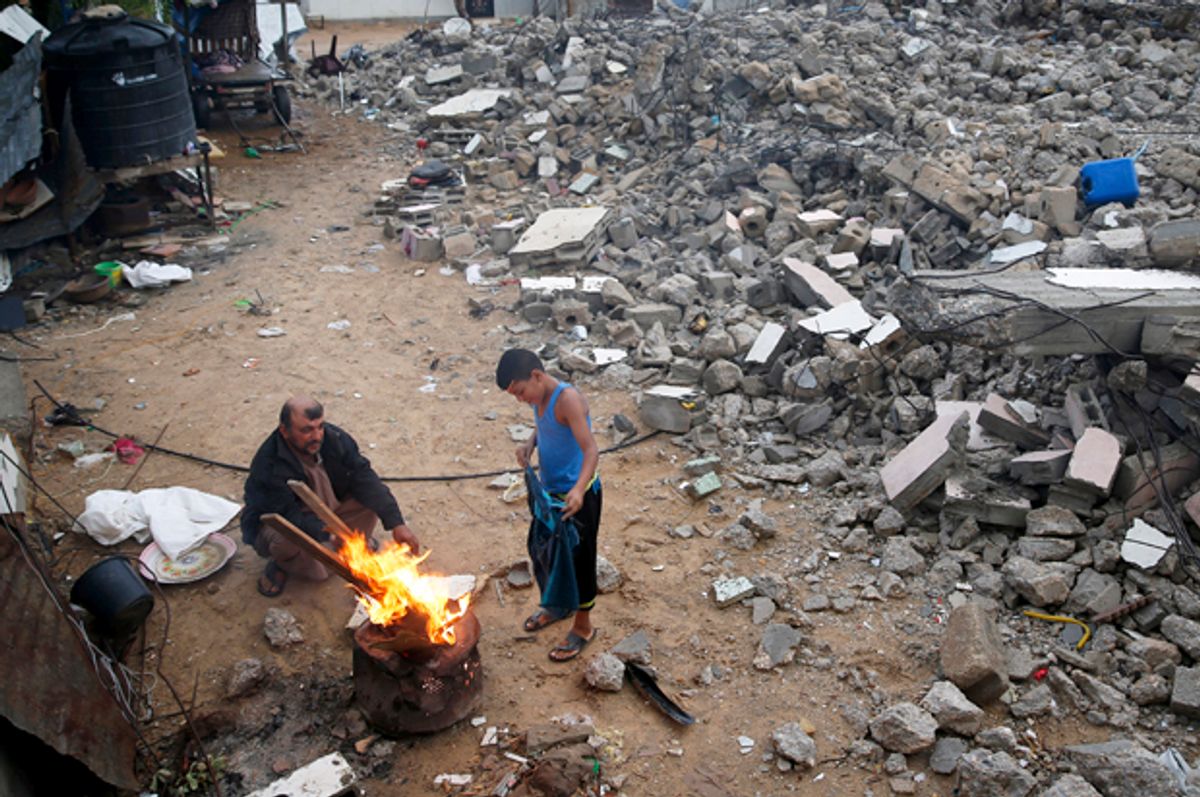 A Palestinian boy dries his shirt near a fire, amongst ruins in Gaza City, October 7, 2015. (Reuters/Suhaib Salem)
--

Recently, 20 members of Congress sent a letter to President Barack Obama urging him to appoint a Special Envoy for Palestinian Youth to collect information necessary to actively promote Palestinian children’s human rights. By standing up for Palestinian children’s rights, these lawmakers are directly challenging the decades-long U.S.-led "peace process" that has consistently demanded peace without justice, enabling and perpetuating an unjust and oppressive military occupation.

The letter, initiated by Rep. Betty McCollum, (D-Minn.),  expresses concern for Palestinian children under 18 years old living “under the constant fear of arrest, detention, and violence at the hands of the Israeli military,” and declares “The situation on the ground is rapidly deteriorating and we must act now.”

Just a few hours after the letter was delivered to President Obama, Israeli forces fired on a civilian car, killing fifteen-year-old Mahmoud Rafat Badran. Mahmoud and his cousins were driving home to the occupied West Bank village of Beit Ur al-Tahta around 1:30 a.m. after a night of family fun at a nearby swimming pool when Israeli forces opened fire, according to Defense for Children International – Palestine (DCIP).

As intensified violence in Israel and the occupied West Bank grinds on, Rep. McCollum and her colleagues declared, “The root cause of [violence] must be examined and understood in which they are taking place.”

In October, amid escalating violence, Israeli Prime Minister Benjamin Netanyahu promised a “harsh offensive” in response. The results are now disturbingly clear as Mahmoud became the 50th Palestinian child from the West Bank, including East Jerusalem, and the Gaza Strip to be killed as a direct result of intensified violence, all except one at the hands of Israeli forces, according to documentation collected by DCIP. Of this number, 37 allegedly carried out stabbing, gun or car ramming attacks against Israeli civilians or soldiers.

While Israeli military authorities reportedly opened an investigation into Mahmoud’s killing, accountability for shootings by Israeli forces is extremely rare. Since 2014, only one incident, the fatal shooting of Nadeem Nawara, 17, in May 2014, has resulted in both an investigation and criminal indictment.

Shockingly, despite repeated allegations of unlawful and extrajudicial killings by Israeli forces, not one Israeli soldier has been charged or convicted of homicide for killing a Palestinian in the Occupied Palestinian Territory since at least 2000, according to data compiled by the Israeli human rights group Yesh Din.

The letter is significant because it asks what many policymakers in the United States avoid at all costs, “Does a life of utter hopelessness and the collective psychological trauma associated with the Palestinian people living for decades under Israeli military occupation directly contribute to violence?”

These 20 members of Congress recognize that systemic impunity and persistent grave human rights violations combined with limited prospects for Palestinian youth are, at least in part, the triggers for recent violence. They also understand that failing to demand human rights, justice and equality for Palestinian children and “ignoring the trauma being inflicted on millions of Palestinian children undermines our American values and will ensure the perpetuation of a conflict and occupation we all want to see end peacefully.”

As McCollum and her colleagues note, “Palestinian youth is one of the most critical demographic groups to building a secure future.” With no end in sight to Israel’s military occupation, the U.S. government must address impunity and demand a vision for the future that incorporates a rights-based framework recognizing human rights, justice, and equality for Palestinians. Failure to do so ensures that an incredibly youthful population will become more and more vulnerable.