To jam, or not to jam: Why Carlos Santana’s reasons for ignoring Israel boycott are dubious at best

Over 400 artists have signed on to an Israel boycott. So why won't the guitarist-activist follow suit? 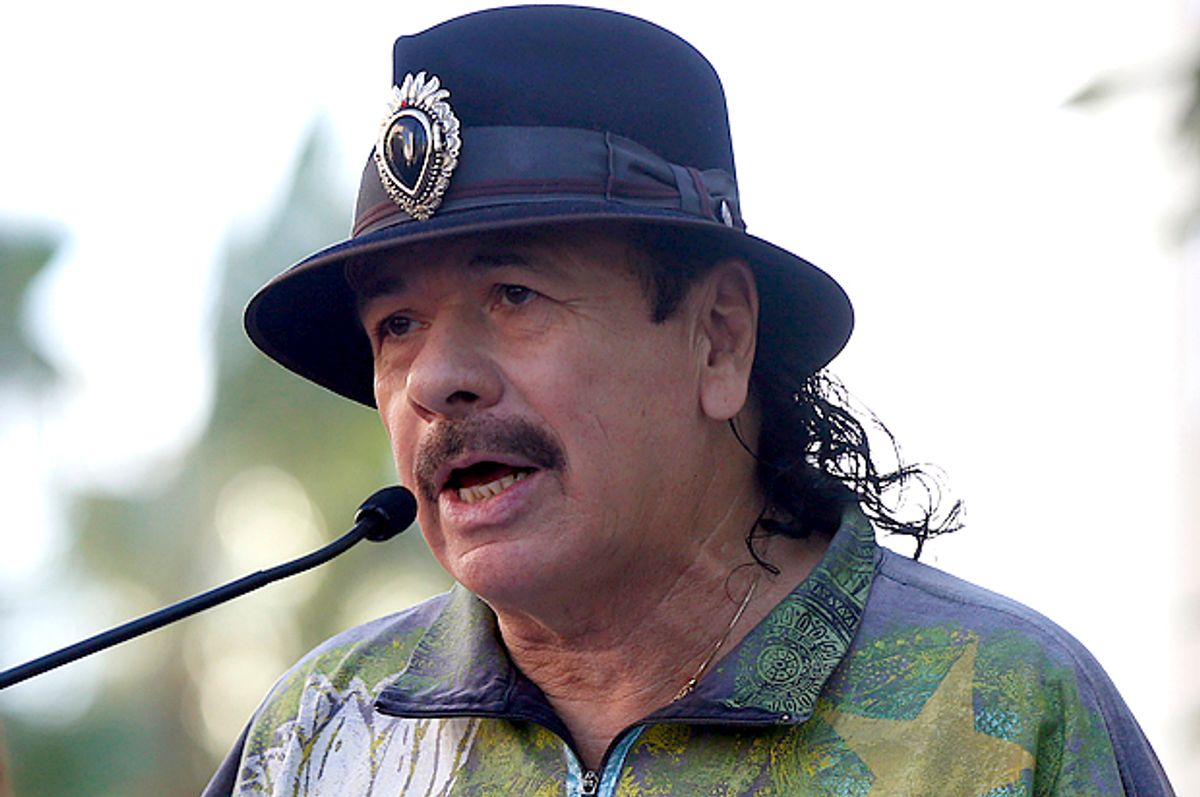 Ever since the cultural boycott of Israel came onto the scene in 2006, a growing number of artists, musicians and writers have joined the struggle.  Immediately after the initial call, some 94 artists led by renown UK critic and writer John Berger and including musicians and songwriters Brian Eno and Leon Rosselson; filmmakers Sophie Fiennes, Elia Suleiman and Haim Bresheeth; documentary maker Jenny Morgan; singer Reem Kelani; writers Arundhati Roy, Ahdaf Soueif, and Eduardo Galeano called on their colleagues not to visit, exhibit or perform in Israel. Berger added a personal note to the appeal:

The boycott is an active protest against two forms of exclusion which have persisted, despite many other forms of protestations, for over sixty years — for almost three generations.

During this period the state of Israel has consistently excluded itself from any international obligation to heed UN resolutions or the judgment of any international court. To date, it has defied 246 Security Council Resolutions.

As a direct consequence seven million Palestinians have been excluded from the right to live as they wish on land internationally acknowledged to be theirs; and now increasingly, with every week that passes, they are being excluded from their right to any future at all as a nation.

Here in the United States, Pulitzer Prize winners Alice Walker, Junot Diaz and Viet Thanh Nguyen, musicians Chuck D and Boots Riley, journalists Barbara Ehrenreich, Ben Ehrenreich, Naomi Klein and Dave Zirin and over 400 other artists, musicians and authors have endorsed the boycott, while Lauryn Hill and Pharrell Williams have cancelled their performances in Israel. Yet, as of this writing, one of the most famous and influential musicians in the US has refused to honor the boycott, despite his progressive stances on many social issues.

While of course any individual has the right and indeed the responsibility to act as they see fit, based on their convictions, two things make Carlos Santana’s resistance to the cultural boycott noteworthy.  To begin with, Santana started as a hero of the counterculture. Along with bands such as Sly and the Family Stone, Santana’s original crew was notable for its multi-racial composition and its equally eclectic fusion of different musical traditions.  In the late '60s and well into the '70s, many musicians were taking political stances in their music and in their actions — particularly with regard to the Vietnam War, student protests, black power and various liberatory causes. Music and political action were outward looking, explorative, synthetic, boundary-challenging and, in many cases, activist.  Marvin Gaye’s masterpiece, “What’s Going On,” was a call to consciousness and solidarity. Gaye noted: "In 1969 or 1970, I began to re-evaluate my whole concept of what I wanted my music to say … I was very much affected by letters my brother was sending me from Vietnam, as well as the social situation here at home. I realized that I had to put my own fantasies behind me if I wanted to write songs that would reach the souls of people. I wanted them to take a look at what was happening in the world."

Santana is no stranger to activism. He is the founder of the Milagro Foundation, whose fundamental belief is “that children everywhere deserve to live a life with full access to proper healthcare and education as well as opportunities to develop into creative human beings.” It would seem that now he has the opportunity to make a powerful statement for the rights of Palestinian children to just those things.

But while those urging him to honor the boycott have pointed out the numerous and egregious instances of Israel’s denial of healthcare and education to Palestinian children, in this case Santana seems yet another instance of someone being “progressive except for Palestine.” Apparently, he has a specific sense of what is incorporated in “everywhere,” and which children are indeed “deserving.”

On the landing page of the Foundation is a terse statement:

“Carlos Santana is a citizen of the World and he plays his music and spreads his message of Love, Light & Peace wherever he goes. Carlos believes the World should have no borders so he is not detoured [sic] or discouraged to play anywhere on this planet. He and the band are looking forward to performing in Israel this summer.”

Once again, it is disappointing, to say the very least, that Santana can claim a belief that “the world should have no borders” when in fact Israel has created and maintains one of the most illegal and deadly borders in the world — the open-air prison known as Gaza, along with the West Bank.  It is clear that what he really means is that no one will hem him in, for whatever reason.

If this focus on himself and his right to play his music anywhere he wants — even in a country where a sizable number of its inhabitants will be barred from attending his performance — were not enough, Santana has also released a video expressing his excitement over playing in Israel.  One can see him reading off a short script, voicing his hope that his performance will (somehow) help “end the conflict.”  It is worth noting that the video appears on the Facebook page of the anti-boycott group StandWithUs. An organization of Israeli activists, Boycott from Within, has sent Santana a letter about StandWithUs and an associated group called Creative Community for Peace or CCFP. Articles in the press and posts on the StandWithUs website previously indicated that the Israeli Prime Minister’s office had entered into an agreement to pay StandWithUs to promote Israeli government messages on social media. However, StandWithUs says that the project did not proceed, and that StandWithUs did not receive funding. CCFP also denies being paid to promote Israeli government policies.*

In response to this, there has been a petition delivery to Santana's foundation, demonstrations outside of his shows in Stuttgart, Germany; Rome, Italy; and Montreux, Switzerland; many attempts to reach out to Santana and a video that was shared widely on social media asking him not to play Israel. It is doubtful that he will respond. He has the wealth and prestige not to care. But the issue of morality and of ethics — of a person who can at once make the grand gesture to aid children around the world except Palestinian children, who can defy borders but not form a line of solidarity with those who are not afforded that privilege and who consequently suffer devastating and often deadly harm from their captivity and who uses the propaganda tool of an oppressive state to justify performing for select citizens — cannot be so easily dismissed in the name of artistic freedom.

As Nelson Mandela has pointed out, boycott is not a principle, it is a tactic depending upon circumstances. A tactic which allows people, as distinct from their elected but often craven governments, to apply a certain pressure on those wielding power in what they, the boycotters, consider to be an unjust or immoral way. (In white South Africa yesterday and in Israel today, the immorality was, or is being, coded into a form of racist
apartheid).

Boycott is not a principle. When it becomes one, it itself risks to become exclusive and racist. No boycott, in our sense of the term, should be directed against an individual, a people, or a nation as such. A boycott is directed against a policy and the institutions which support that policy either actively or tacitly. Its aim is not to reject, but to bring about change.

Maybe Santana is averse to boycotts, to constraints on his freedom. It will be interesting to see if he utters a word of support for the rights of an oppressed people while he is playing Israel, or if he will instead just utter empty words of “love, light and peace” while Palestinian children suffer. He would do well to take a page from Marvin Gaye’s book and put his “fantasies” behind him, and “take a look at what [i]s happening in the world."

*Correction: This article has been revised to correct an error regarding funding of pro-Israeli groups StandWithUs and Creative Community for Peace, which was based on press articles and posts on the StandWithUs website that were outdated.