The fall of “Divergent”: The final film will bow on TV — here's why it matters

The YA-movie niche — the domain of young female stars — is withering; Hollywood doesn’t know what’s next 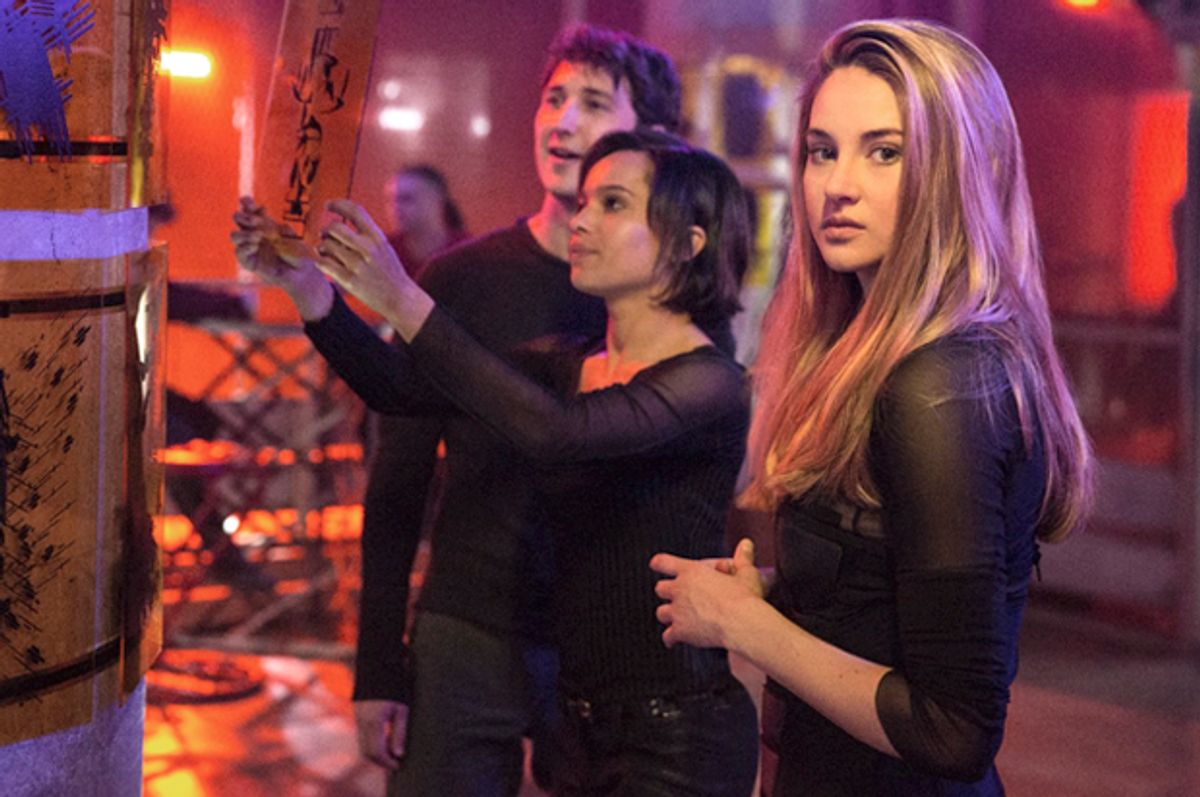 “Ascendant” won’t be coming to a theater near you. The final installment in the “Divergent” film series, starring Shailene Woodley as yet another lovelorn rebel fighting totalitarianism (and her hormones), is heading straight to television. The YA dystopian flick will reportedly premiere as a TV movie—with the hopes of spinning it off into a series.

This may spell trouble behind the scenes. When asked about the film’s new distribution plan at Comic-Con, Woodley said she was on a plane when the news broke and was shocked. Meanwhile, The Hollywood Reporter speculates that many actors from the once-popular series—including Naomi Watts, Ansel Elgort, Miles Teller, Theo James and Jeff Daniels—may skip out on the finale should it be TV-bound. In order to sign them for a television movie, their contracts (which are exclusively bound to theatrical releases) would have to be renegotiated. Elgort and Teller, who starred in “The Fault in Our Stars” and “Whiplash,” respectively, are much bigger stars than they were when the series debuted. They’re likely to ask for too much money.

The humbling of “Ascendant” mirrors the fate of the YA genre as a whole, which has been experiencing diminishing returns in recent years. “Harry Potter and the Sorcerer's Stone” kicked off the craze of adapting young adult books into potential film franchises in 2001 when it debuted to a then-record $90 million, unthinkable at the time. (In 2016, it almost feels quaint.) The genre, however, hit its peak in 2013, when “The Hunger Games: Catching Fire” took in $424 million in the U.S., the best-ever sum for a film based on a young adult bestseller.

“Catching Fire,” directed by Francis Lawrence, was both a smashing success and a harbinger of doom. Like a bad magician at a roadside carnival, Lionsgate decided to saw the last two movies in half. The trick had worked well for “Harry Potter” and “Twilight” and makes sense from a financial perspective: By doubling your movies, you theoretically double your profits. Instead, the distributor ended up with two flailing, bloody stumps. “Mockingjay—Part 1” tapped out with $90 million less at the global box office than its predecessor. “Part 2,” which debuted at the end of the YA craze, finished with another $100 million less than that.

The “Divergent” series followed a similar trajectory. The first film debuted with a promising $150 million back in 2014, signaling the start of what could have been another leggy franchise for Lionsgate. (The “Twilight” series earned $3.34 billion for Summit, which was acquired by Lionsgate in 2012.) Subsequent films, which received increasingly negative reviews, failed to live up to the box office potential of Veronica Roth’s book series, which imagines a post-apocalyptic future in which teens divide into factions for survival. “Insurgent,” released the following year, ended with less money domestically than its predecessor, while “Allegiant” outright tanked. It took in an anemic $66 million. That’s just $14 million more than “Divergent” earned in its opening weekend.

Since 2014, just two YA adaptations outside the “Divergent” and “Hunger Games” series have earned over $100 million: “The Fault in Our Stars” and “The Maze Runner.” Lightning has yet to strike twice in either case. “The Scorch Trials,” the sequel to “Maze,” offered yet another disappointment for the YA genre, taking home 20 percent less domestically than its forerunner. “Paper Towns,” starring Nat Wolff and the inescapable Cara Delevingne, was adapted from a John Green novel, like “Stars.” The film’s fortunes were less than heavenly, plummeting to earth with $32 million.

The trouble with YA adaptations is that they’re awfully samey. How many times can you watch teens topple dictatorships, wistfully battle cancer, romance the undead, or discover that they have very special powers that mark them for a greater purpose? In “The Host,” an Angela Chase-lite teen with a chronic case of internal monologue (Saoirse Ronan) must save the human race from parasitic aliens. Cassie Sullivan (Chloë Moretz) also fights for survival in the face of an extraterrestrial takeover in “The Fifth Wave.” Lena (Alice Englert) discovers she is a witch in “Beautiful Creatures,” while the awkwardly named Clary Fray (Lily Collins) learns she is a descendant of half-human, half-angel warriors. To think, some girls go to band camp.

None of these movies finished as box office successes. Altogether they earned just $112 million in the U.S., slightly more than what “The Secret Life of Pets” earned in a single weekend. Misfires like “The Giver” ($44 million), “I am Number Four” ($55 million), “Seeker: The Dark Is Rising” ($8 million), “Cirque Du Freak: The Vampire’s Assistant” ($13 million), “Vampire Academy” ($7 million), and “Ender’s Game” ($61 million) fared little better.

This might appear to be a case of “good riddance to bad rubbish,” but there’s a depressing downside to the demise of young adult adaptations: These films are some of the few blockbusters each year that feature women in lead roles. YA movies are dominated by female protagonists, from the good (Hazel Lancaster) to the participation ribbon-worthy. Tris Prior, a blatant Katniss clone, has always felt like an egregious waste of Shailene Woodley’s immense gifts. The actress emerged as one of the most promising talents of her generation after her acclaimed turns in “The Spectacular Now” and “The Descendants,” the latter of which earned her a Golden Globe nomination. She deserves better than a knockoff.

But if Woodley seems destined for bigger things, Hollywood hasn’t figured out what that is. This summer, very few mainstream films will feature a female protagonist. There’s “Ghostbusters,” which debuted last weekend after months of men complaining that it would ruin their childhoods, and the James Wan-produced “Lights Out.” “Me Before You” stars Emilia Clarke (“Game of Thrones”) in a right-to-die romance about a caretaker who falls in love with her patient (Sam Claflin). Otherwise, we’re left with “Alice Through the Looking Glass,” “Finding Dory,” “Bad Moms,” and “Rogue One,” the “Star Wars” spinoff starring Felicity Jones. (It’s perhaps telling that the highest-grossing female-led movie of 2016 so far stars a forgetful cartoon fish.)

Woodley has “Snowden,” Oliver Stone’s biopic about the NSA whistleblower, waiting in the wings, while Chloë Moretz has been tapped for Disney’s live action remake of “The Little Mermaid.” Saoirse Ronan will star in the most recent adaptation of Anton Chekhov's “The Seagull” later this year. Their male counterparts, however, have the ability to balance out smaller projects with big-budget tentpoles that affirm their A-list status: When Chris Evans isn’t doing “Snowpiercer” and “Fracture,” he has Captain America. Chris Pratt, who starred in “Her” and “Zero Dark Thirty,” has three franchises: “Jurassic World,” “Guardians of the Galaxy,” and the rumored “Indiana Jones” reboot, to which he’s been attached.

This isn’t just about giving talented actresses a chance to topline their own films. It’s also about telling women’s stories, which may prove difficult if Hollywood decides that teenage girls are no longer interested in seeing themselves represented on screen. YA adaptations like “Looking for Alaska,” based on yet another John Green novel; “Miss Peregrine’s Home for Peculiar Children,” which will be directed by Tim Burton; and “A Wrinkle in Time,” adapted from the beloved Madeleine L'Engle novel, represent an important test for an industry that’s reticent to make any movie about a woman, let alone one with a budget.

It’s important not to take the wrong lessons away from the death of YA. The ongoing #OscarsSoWhite campaign showed that there’s an incredible demand for a diversity of voices to be heard in the industry, including historically marginalized groups like people of color, women, and queer audiences. If Hollywood learns anything from the “Ascendant” fracas, it’s perhaps that these groups should be allowed to be in diverse types of movies—rather than repeatedly milking the same genres until their inevitable expiration date.

Young women like Tris and Katniss have proved that girls can save the world from fascism, but maybe it’s time to let them do other things, too.