The party of myth and nostalgia: The GOP jobs narrative is hopelessly stuck in the past 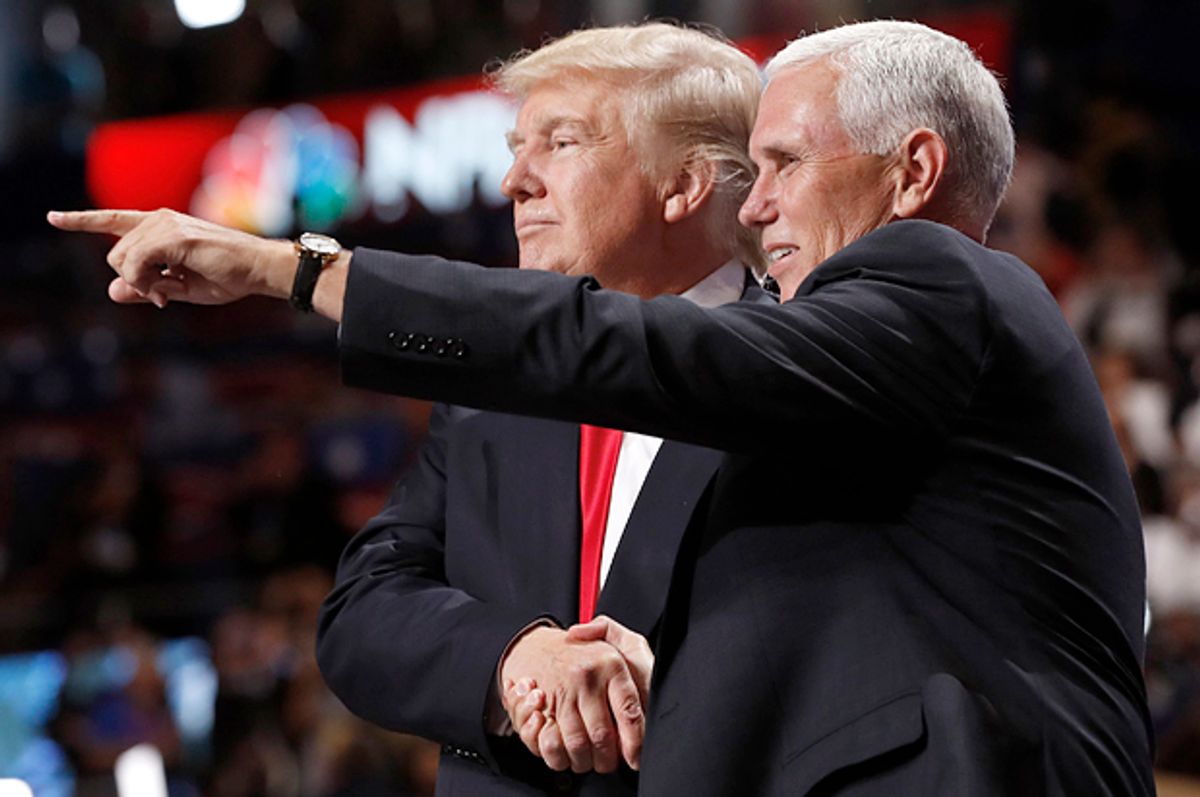 Donald Trump and Mike Pence at the conclusion of the Republican National Convention in Cleveland, July 21, 2016. (Reuters/Jonathan Ernst)
--

Somewhere in America there is a little boy, full of hope and wonder, telling his parents that when he grows up he will work on an assembly line in a factory. His parents, holding back a flood of tears, will have to break the news to him that his dream will never come true.

In just a few months, guidance counselor offices in high schools throughout the nation will host scenes of despair and defeat when young women explain their aspirations for employment in textile mills. The counselors will reply by explaining that all of those jobs are gone. “I guess you’ll just have to apply to college,” they’ll say in hopes of offering consolation, while the dejected girls gather the strength to get through the day. Some of them will briefly consider moving to Mexico or Vietnam, but to maintain proximity to family and friends, will search out alternative career choices. No matter where they go and what they do, they will always wonder how much better life could have been.

The scenario of children fantasizing about industrial-age employment is laughably absurd, but it is not too far from the depiction of America that now dominates Republican rhetoric and mainstream media coverage of the presidential election. Largely due to the demographic category of most pundits, and Donald Trump’s overrated mobilization of the “white working class,” baby boomer nostalgia has overtaken political discourse. On a daily basis, voters are now subjected to maudlin reminiscence for the bygone days of manufacturing employment. As if the entire country has taken a ride in a time machine to the late 1970s, cable news carries a continual debate over how to appeal to working people who can no longer get a job in the factory down the street.

It is a bizarre fixation on the rearview mirror, and the backward-gazing vantage point of baby boomers ignores the real reasons for the decline of careers in manufacturing, but also neglects nearly all the economic questions that will determine the health and wealth of young adults attempting to assimilate into lives of stable, independent, income-earning adulthood. To obsess over the ghosts of America’s forever dead past, at the expense of the lives of the imminent future, is to violate the purpose of public policy, and sign a suicide note for the Republican party.

As with most right-wing rhetoric, there is a racial element at play. It does not require a jewelry appraiser’s eye for detail to notice that discussion of black and Latino poverty almost always ends with condemnation of absentee fathers and exhortation for personal responsibility, but that examinations of white poverty churn out the stale clichés of “outsourcing” and “bad trade deals.” Poor blacks and Mexicans are losers too lazy to get their acts together, but the poor whites salivating over Trump’s piss-colored mug are victims of a massive economic conspiracy.

Equally obvious as the ethnic dimension of Republican rage is the generational bias. Throughout the Republican freak show convention it was almost impossible to hear anyone address important issues affecting Americans under the age of 45. Education, college tuition, student debt, first-time home ownership, family medical leave, health insurance for young workers, and anything else that might interest a person not approaching retirement or the cemetery was off the table and away from the microphone.

President Obama routinely attempted, and often succeeded, in advancing a youth-focused policy agenda. The Affordable Care Act allows for citizens to remain on the health coverage plan of their parents until the age of 26. Recently, the president has worked to enhance and promote the income-driven repayment options for student debtors, and he also tried, but failed, to make tuition-free community college and affordable high-speed Internet access in poor neighborhoods and rural outposts part of the national reform itinerary.

The Republicans have opposed all of these measures aimed at investment in a free and prosperous future, and instead have focused on “bringing the jobs back” and “making America great again.” “Back” and “again” are the operative words in those empty and delusional slogans. The rhetorical emphasis on nostalgia demonstrates a boomer bias longing for a return to the “way things used to be.”

The Republicans have opposed all of these measures aimed at investment in a free and prosperous future, and instead have focused on “bringing the jobs back” and “making America great again.” “Back” and “again” are the operative words in those empty and delusional slogans. The rhetorical emphasis on nostalgia demonstrates a boomer bias longing for a return to the “way things used to be.”

Mike Pence, in his early speeches and interviews as Trump’s running mate, has tried to have his job and outsource it too – at once bragging about “bringing manufacturing jobs back” to Indiana, while also decrying the state of the economy as weak. His jobs record as governor of Indiana is average at best, but most of the new jobs in his state are not available in factories, but modern offices and tech centers.

The old sitcom “Newt Gingrich,” still in rerun syndication on cable news, recently blamed President Obama for “killing manufacturing jobs,” and predicted that Trump would reverse the deadly trend. Pence, Gingrich, Trump, and their cheerleaders like Bill O’Reilly and Sean Hannity, all fail to even mention what might actually assist working-class people in their struggle to enjoy lives of financial autonomy – the high wages, generous benefits and workplace protections that come with union membership.

Meanwhile, no one under the age of 30 dreams of working in an industrial complex. Unlike boomers, they were not alive when manufacturing jobs were still abundant. So, it seems unlikely that they are mournful over their disappearance.

There are more Americans in college right now than at any other point in history. Contrary to the apocalyptic whining and hand-wringing that has captured American debate, most college graduates are doing rather well. A survey of hundreds of thousands of 2014 baccalaureate graduates found that 80 percent report a “positive outcome” from their education, with the overwhelming majority in full-time, salaried employment, and a large percentage continuing their studies at the graduate level. Those who do not attend four-year universities, or even community colleges, have the option of trade school enrollment. High-wage positions in welding or automotive technology, to cite two popular examples, are readily available in most areas of the country. The poor need educational assistance, job training and service subsidies to matriculate into the middle class. Illusions of a Rockwellian renaissance of factory jobs will get them exactly nothing.

It is important to acknowledge the reality that, while America is far from an Edenic paradise, it is not the Dantean circle of hell commentators now imagine, because the most optimistic group of Americans are those under the age of 35, while the most pessimistic are those over the age of 55. Just as the Brexit vote divided along generational fractures, belief that America is “going to hell,” as Donald Trump charmingly claims, is also age-based. The elderly look at a country of gender-neutral bathrooms, gay marriage, rapid diversification, and the loss of blue-collar assembly line employment, and see a dystopia teetering over the edge of Armageddon. Young Americans see the tedium of day-to-day existence; full of reasons to celebrate and despair.

Among the reasons to despair is student debt. The average college graduate leaves the commencement stage $28,110 in the red. Entrance into a culture of debt, with an onerous burden on one’s back, stifles entrepreneurial activity, creative risk, home ownership and familial establishment. It impedes the lives of millions of people, and will exact a much costlier consequence that the inevitable and unavoidable depletion of the few manufacturing jobs that remain. It is also a crisis that imaginative and industrious public figures can manage, and eventually solve, unlike the development of a knowledge- and service-based economy, which, for better or worse, is here to stay.

There are currently more goods, equipment and technology manufactured in the United States than at any other point in American history. Automation allows for high rates of productivity with minimal personnel. Instead of paying 12 men to work a line, a corporation can now employ one engineer or computer programmer to run the line. No alteration of existing trade deals, no matter how tilted toward the wealthy, or artistic negotiation from a reality television star turned president will convince CEOs and shareholders to use 1970s technology to manufacture their products. Baby boomer Republicans pray for the impossible, and accept the faith claim that a man with no experience in governmental leadership can perform the miracle of time reversal. Democrats, while certainly not perfect, at least live in the real world.

Hillary Clinton has announced that, should she win the presidency, she will move to make public universities tuition-free for students from households with an annual income under $85,000. In five years, universities will elevate the ceiling to $125,000. Her higher-education policy also includes a three-year moratorium on payments for any student debtor who starts a new business, and an acceleration of forgiveness for those entering a career in social services. She is also looking into lowering interest rates on existing and future student loans.

Clinton also proposes to guarantee 12 weeks of paid family and medical leave to care for a newborn child or seriously ill family member. Millions of young parents, and children of terminally ill senior citizens, will benefit from the adoption of the long overdue and humane standard of Western society. These plans borrow significantly from Bernie Sanders, demonstrating the beneficial influence that the Sanders candidacy had on the Clinton campaign, but they also indicate an entirely separate sightline separating the two major parties.

While one has a forward-looking, progressive and aspirational, albeit imperfect, vision for future possibility, the other is hopelessly living in the past – chained to its favorite artifacts of a lost age: factories along the side of the road where white men work double shifts without complaint to come home to their wives in aprons cooking dinner for their heterosexual, Christian children.

The amplification of mythic and ancient America throughout the mainstream media reveals how susceptible journalists and pundits are to Republican propaganda, and how the generational bias for the old against the young poisons political debate. Every time a talk show host asks a boring question about “abandoned factories,” American culture gives priority to the romanticization of boomer memories over the real needs of youthful ambitions. It buries the future in the graveyard of the past.

It also confronts voters under the age of 45 with a clear choice and responsibility. If they do not turn out in significant numbers they will only encourage the erasure of their lives from public policy concern. To recite an old cliché, the future is in their hands – their own and their country’s.