Trump's killed the GOP: He erased covert racism from the party's platform — by being overtly racist

With the nomination of Trump, the 162-year-old Republican party has rewound to its pre-dog-whistle iteration 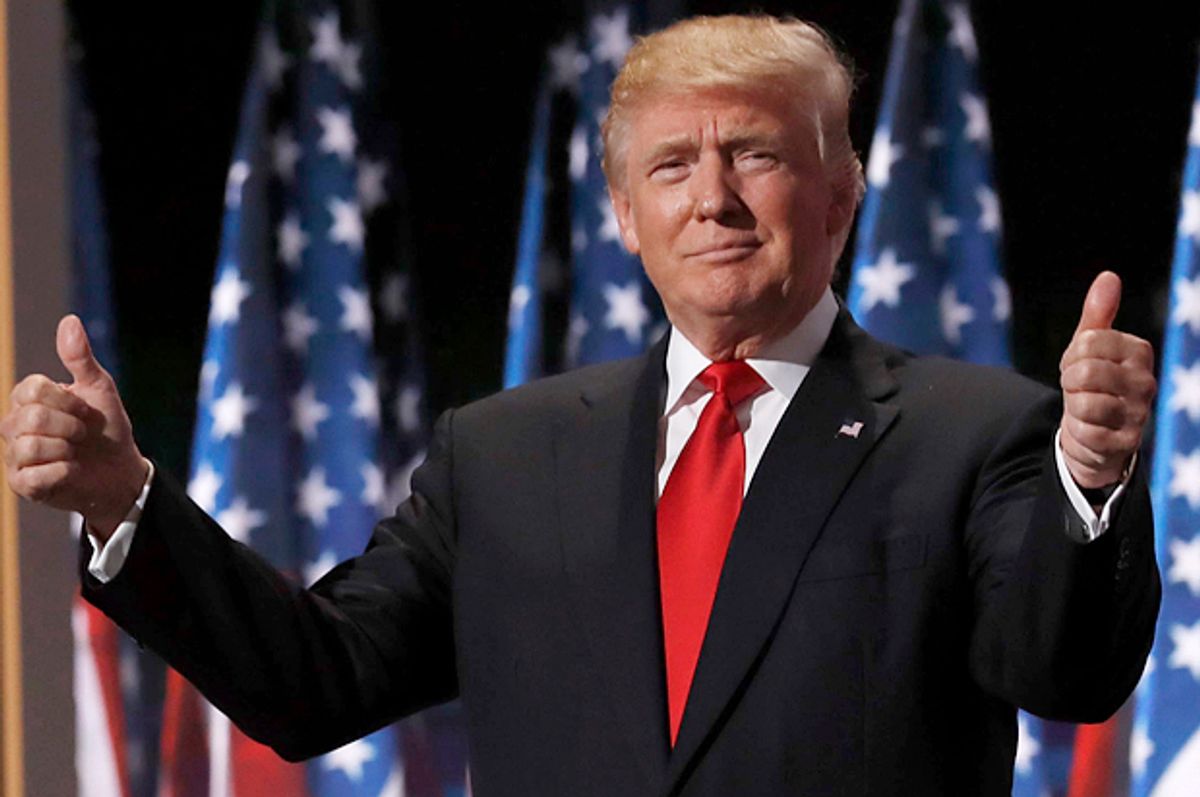 The modern Republican Party is dead and Donald Trump killed it. He did so by extracting its heart, a large group of voters who joined the party because of their views on race but who disagree with the GOP’s economic positions.

Major American political parties go through eras, sometimes changing policies, sometimes even dying.  Take the GOP. It was born in significant part from the ashes of the Whig Party when the Whigs could not keep their pro and anti-slavery factions from splitting apart. The Republican Party when it formed had at its core opposition to slavery. Internal debates changed GOP identity and membership repeatedly over its 162-year history. At the beginning of the 20th century, the party fought over tariffs and the busting up of monopolies. It then swung to being the party of railroads and big business until its policies were largely blamed by the American people for the Wall Street crash of 1929 and the Great Depression.

The most recent incarnation of the GOP, what I will call the Modern Republican Party, has been around for the last five decades. It combines conservative economic policies with a dog whistle to white voters concerned about race and demographic change.

Enter Donald Trump, a candidate who did not fit the traditional mold favored by “mainstream conservatives.” He easily dispatched the allegedly “best field ever” of candidates for the Republican nomination. Nine governors, five senators, a brain surgeon and a tech CEO all fell quickly to Trump.

Trump’s opponents, representing the economic, religious and libertarian wings of the GOP, accused Trump of not being a real Republican.  Jeb Bush’s super-PAC ran an odd ad of Donald Trump as an ice sculpture melting away before declaring, “If Trump wins, conservatives lose.”  A Ted Cruz ad had children playing with a Trump action figure that “pretends to be a Republican.”

This did nothing to curtail Trump’s obliterating the field. How can this be? It’s simple. Donald Trump played the race card. Again and again and again. Proving that more than any current GOP leader, he truly got the Modern Republican Party.

When Trump announced his candidacy, he proclaimed:

Here is a Trump retweet about Jeb Bush’s Mexican-American wife:

#JebBush has to like the Mexican Illegals because of his wife.

Asked to respond to an attack by two supporters who beat and urinated on a Latino man, then told police that “Donald Trump was right, all these illegals need to be deported,” he said:

Donald J. Trump is calling for a total and complete shutdown of Muslims entering the United States until our country's representatives can figure out what is going on.

It is quite possible to hold racist views and yet have your progressive positions on climate change or labor unions drive your vote.  Or put more simply, there are certainly racists in the Democratic Party.  On the other hand, there are voters who are anti-racist yet vote Republican because they oppose abortion rights or side with the party because of some other deeply held view.  To distinguish the specific group of voters in the GOP for whom their views on race dominate their other interests, I will describe these voters as “race-motivated.”

Race-motivated voters within the Republican Party strongly supported Donald Trump over other GOP candidates.  In a March Washington Post – ABC News poll, 54% of Trump voters said that whites are losing out because of preferences for African-Americans and Latinos.  No more than 37% of any other GOP candidate’s supporters held this view.  Similarly, recent research that reviews American National Election Survey Data indicates that Trump supporters have significantly worse views of African-Americans, Latinos and Muslims than Republicans that supported other candidates.

While Trump supporters are more race-motivated, they also are on average quite a bit more liberal on economic issues than supporters of other Republican candidates.  According to the RAND American Life Panel, which consistently polls 6,000 U.S. adults, the more supportive a GOP primary voter is of raising taxes on the rich, the more likely they are to support Trump.  Similarly, the more positive a GOP primary voter is in their impression of labor unions, the more they favor Trump.

Key to Trump’s success is that elements of economic liberalism are actually quite popular among a large number of Republican primary voters. RAND found that a majority (51%) of Republican primary voters strongly or somewhat favor increasing taxes on individuals who make more than $200,000 a year, while 38% have a favorable or very favorable opinion of labor unions. These voters strongly supported Trump over other Republican candidates.

I am not indicating here that Trump actually is liberal on economic issues, only that he is perceived as more liberal than other Republicans by Republican voters.  In fact, Trump has been all over the map.  In November he said that that wages are too high in the United States, then later in May he said they were too low.  His positions on trade and protecting the American worker are often along the lines of “do what I say, not what I do,” as Trump companies have regularly shipped work overseas and corporations he is affiliated with like Trump University and Trump Institute are widely accused of defrauding working people.

It is primarily Trump’s position on two federal entitlement programs -- Social Security and Medicare -- that distinguish him as more left-leaning on economic issues than Republican colleagues. Huffington Post reports that Trump told House Speaker Paul Ryan that any reduction in Medicare or Social Security benefits would be both morally wrong and a political mistake. Trump has made this case repeatedly from the very beginning of his campaign. Ryan, it should be noted, has led GOP efforts to cut Social Security and Medicare benefits.

What Trump understood from the outset is that racially biased positions in combination with more liberal economic policy would easily win the Republican primary.  This is because the Modern Republican Party hosts a large number of voters who agree with the Democratic Party on economic issues but do not vote for Democrats because they disagree with them on matters of race.  Race is simply more important to these voters than their economic interests.  Trump ensured that these voters did not have to choose -- they could vote for a candidate who espoused their racial and economic views.

Trump’s approach has an ugly precedent. Prior to the Civil Rights Acts of the 1960s, the South was largely a one-party region, controlled by the Democrats. Southern Democratic congressmen and senators from states where African-Americans were denied the vote helped deliver New Deal jobs programs, Social Security and major public works projects. At the same time, they brought Jim Crow to Congress, ensuring for instance that the old-age benefits and unemployment insurance made possible by the Social Security Act of 1935 did not extend to African-American agricultural and domestic workers.

Following the Civil Rights Act of 1964, the Republican Party appealed directly to working-class white voters who had been a core Democratic constituency for a century.  To win these voters, the GOP did not liberalize its economic prescriptions (which actually got more conservative and less worker friendly over time) but did fully abandon any connection to Civil Rights. Nixon came out against busing to end school segregation. Reagan went so far as to kick off his campaign in Neshoba County, Mississippi, declaring “I believe in States Rights,” just a few miles from where Civil Rights workers Schwerner, Goodman and Chaney were murdered by supporters of those same “States Rights.”

In the 1980s and 1990s, ending affirmative action programs for people of color in state college admissions became a central theme for Republican governors and legislators. And as the Latino population grew, Republicans drove anti-immigrant and anti-Latino laws like Proposition 187 in California in 1994 and SB 1070 in 2010 in Arizona. In doing so, they drummed up white support for each state’s GOP.

One of the architects of the GOP’s devolution on race -- from a largely pro-civil rights party to one that embraced race-motivated campaigning -- was Lee Atwater. He served as senior campaign advisor to both Ronald Reagan and George H.W. Bush and was also chairman of the Republican National Committee from 1989 to 1991. In an interview in 1981 he explained the strategy:

You start out in 1954 by saying, “Nigger, nigger, nigger.” By 1968 you can’t say “nigger”—that hurts you, backfires. So you say stuff like, uh, forced busing, states’ rights, and all that stuff, and you’re getting so abstract. Now, you’re talking about cutting taxes, and all these things you’re talking about are totally economic things and a byproduct of them is, blacks get hurt worse than whites.… “We want to cut this,” is much more abstract than even the busing thing, uh, and a hell of a lot more abstract than “Nigger, nigger.”

This strategy had the effect of delivering to the race-motivated white voter a Republican Party that shared their concern about the growing numbers and power of African-American and Latino voters.  However, that same GOP moved an economic agenda that was very different than that of the 1950s Southern Democrat.  The Modern Republican Party worked to lower taxes for both wealthy individuals and corporations, most visibly with the Reagan and George W. Bush tax cuts.  The theory was that this “supply side” or “trickle down” economics would boost investment and create jobs, thus broadening wealth.  Exactly the opposite happened.  Since the 1970s, wealth has become increasingly concentrated in a smaller number of individuals and wages for the working and middle classes have stagnated and actually gotten worse for low-wage workers.

Enter Trump, the economic populist and unapologetic racist.  He describes some of the economic policies of Republican elites as bad ideas that will hurt working people.  He also speaks in language that is no longer the coded dog-whistle words of “opposing affirmative action” or “addressing immigration enforcement” through workplace rules like E-verify.  Instead, he calls to keep out all Muslims and describes Mexican immigrants as rapists.  He insinuates President Obama is really Kenyan and not American born.  He says Latinos and Muslims cannot be fair federal judges.  He ridicules Asians with broken English while he retweets white supremacists.

No longer will the GOP be able to keep race-motivated voters in line by offering dog-whistle racism while forcing them to swallow economic policies that do nothing to benefit them.  Trump has shown a way forward for himself and other candidates who will embrace economic populism and much more direct racially biased appeals.

And just as there are race-motivated voters who swallow GOP economic policy, there are current Republican voters who will leave the party because of Trump’s explicit appeals to race.  This potentially large group of current GOP voters have no desire to be associated with racist or bigoted attacks and morally oppose the raising of these views to a central role in the Republican Party. Their departure will shrink the GOP base and further increase the dominance of the race-motivated voter in the GOP.

The Modern Republican Party faces a classic party collapse. The race-motivated voter now knows he or she represents the dominant Republican constituency and Trump has shown them that it is no longer necessary to tolerate GOP attacks on Social Security or Medicare. Candidates now know they can win Republican primaries by appealing to this dominant constituency, so we will soon find candidates at all levels acting a lot more like Trump. Economic populism and outright racism will forever more trump trickle-down economics and dog whistles. Before it dies, the Modern Republican Party will shrink, wither, and almost certainly become uglier.

Henry Fernandez is a Senior Fellow at the Center for American Progress Action Fund. The views expressed are his own.