A new heyday of horror: Why the scary movie just might save Hollywood from itself 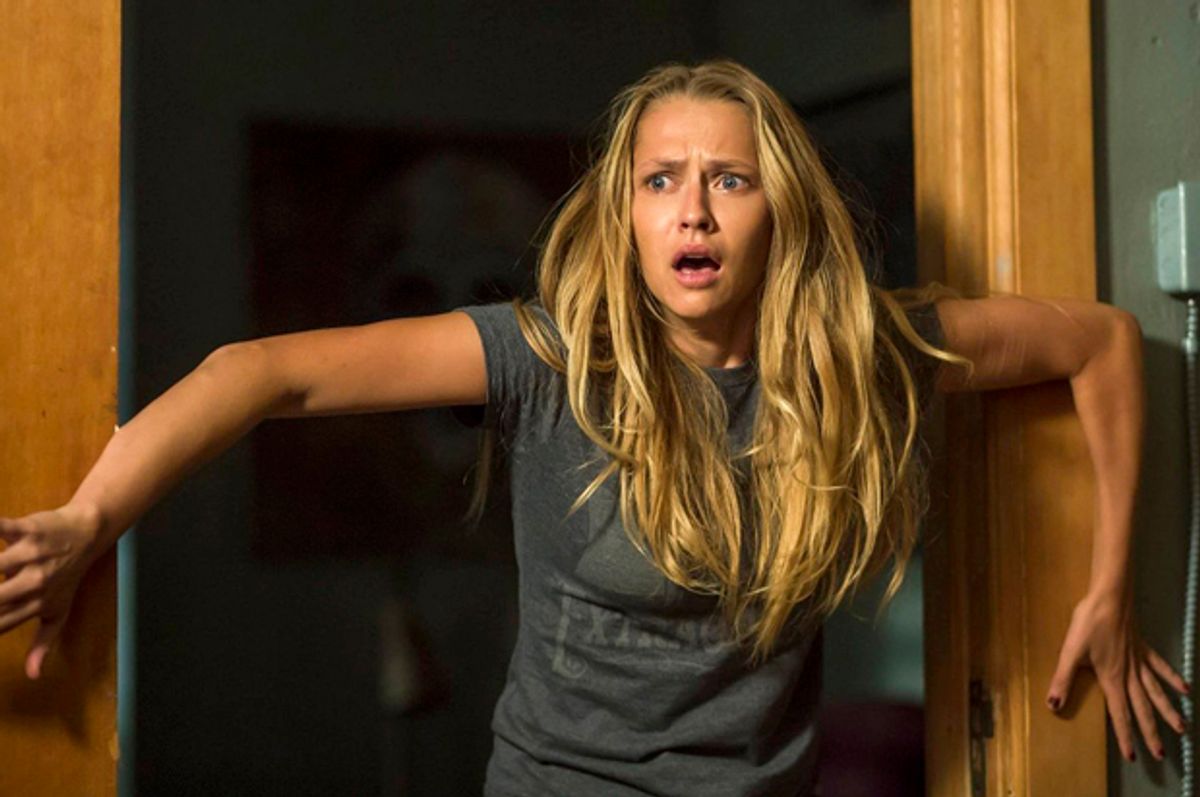 Horror movies are taking over the summer.

This weekend’s “Lights Out” did something that startlingly few movies have done this year: It made its money back. The well-reviewed horror film, starring Maria Bello (“A History of Violence”) and Teresa Palmer (“Warm Bodies”), took in a strong $21 million during its first three days in theaters, four times its budget. The David F. Sandberg-directed movie, based off a Swedish short about a malevolent apparition that can only be seen in the dark, cost just $5 million to make.

The success of “Lights Out” is part of what’s been dubbed a watershed year for genre films: A number of horror movies are proving sleeper hits during one of the worst years for Hollywood in recent memory. While have studios released a string of costly flops (including “Alice Through the Looking Glass” and “The Huntsman: Winter’s War”), modestly-budgeted horror films continue to break out at the box office. Examples include “10 Cloverfield Lane,” the spinoff to J.J Abrams’ 2008 monster movie; “The Witch,” a years-in-development parable about the power of fear in colonial America; “The Purge: Election Year,” the most recent entry in the indestructible legalized murder franchise; and “The Shallows,” in which Blake Lively fends off a carnivorous shark in a barely-there bikini.

You might have also caught “The Conjuring 2,” the James Wan-directed follow-up to his 2013 smash. Although the film earned significantly less than its predecessor (a 26 percent dip), the sequel landed in the black due to its very slim budget—just $40 million. For reference, that’s less than a fifth of the mammoth $250 million sum Disney spent making “Captain America: Civil War.” The Wrap reported that, when factoring in production budget, “The Conjuring 2” was actually more profitable than “Civil War,” the second-biggest movie of the year in the U.S. (Note: When worldwide grosses are included, the Captain reigns supreme.)

This year’s five most successful horror movies (“The Conjuring 2,” “The Purge: Election Year,” “10 Cloverfield Lane,” “The Shallows, and “The Boy”) have earned $637 million globally, nearly seven times their combined budgets, which total just $92 million. That means that these movies—combined—cost about a third of what WB sunk into the abysmal “Batman v Superman.” Horror movies, however, aren’t just good business. At a time when studios have thrown the bulk of their resources behind superhero franchises, board game adaptations, and global brand synergy at the expense of smaller projects, a string of modestly budgeted, acclaimed horror films may help save Hollywood from itself.

The horror genre has long been extremely reliable at the box office. “Horror films are always bankable unless they’re flat-out awful,” Paul Dergarabedian, a senior analyst at comScore, told The Wrap. What’s notable, though, is that while certain films earned poor reviews and remained profitable (e.g. “The Forest”), a great number of the horror hits from the last few years were championed by critics. “The Shallows,” whose racial politics are as distasteful as the film is thrillingly directed, has a killer 77 percent on Rotten Tomatoes, tipped as a future cult classic. One critic even opined that it was better than “The Birds.” “The Witch” went over even better with critics, scoring a 91 percent.

A decade ago, when the genre was synonymous with the bottom of the barrel (e.g., “Jason X”), that sort of thing would have been unheard of. But in recent years, horror films like “The Babadook” and “It Follows” have brought the arthouse to the mainstream, telling small, personal stories in a popular genre. “The Babadook” deals with the primal terrors of being a parent, while “It Follows” is a terrifying parable of the HIV crisis, in which teenagers are stalked by a demonic presence that’s transmitted through sexual contact. The premise sounds ludicrous, but David Robert Mitchell’s impressive panoramic cameras make it unmissable and unforgettable.

There’s also “The Gift,” last year’s Joel Edgerton-directed stalker thriller that masterfully plays with its audience’s sympathies. Who is at fault, the loner (Edgerton, doing double duty) who just wants to be accepted by his high school classmate (Jason Bateman) and resorts to extreme measures? Or his former schoolmate, the class bully who continues to terrorize him? Marking the actor’s first time behind the camera, “The Gift” recalls the best of European suspense films, with shades of Michael Haneke (“Caché”) and Henri-Georges Clouzot (“La Diabolique”).

Should you find the ending of “The Gift" distasteful, you might prefer “The Guest” and “You’re Next,” both from the directing/screenwriting team of Adam Wingard and Simon Barrett. In “You’re Next,” the duo take the slasher thriller to its furthest possible limits, elevating the genre to a maximalist blood opera. The film, made with their usual tongue-in-cheek sensibility, is about a group of friends who stay in a secluded cabin for the weekend, where they are hunted by men in animal masks. There’s also “Goodnight Mommy,” the Austrian horror film about young boys who take their mother hostage, convinced she is an impostor. I found it repellent, but others thought the hostage tale was sadistically gripping.

The renewed interest in horror films recalls the genre’s heyday in the mid-’70s, when films like “Halloween” and “The Exorcist” showed that the often-derided form could be artistic and avant garde, even while making you want to pee your pants. “Suspiria,” the best-known of the Italian giallo films, suggests a blood-splattered Douglas Sirk, a shockingly scarlet ballet of ultraviolence. “Don’t Look Now,” adapted from the Daphne Du Maurier novel, brought those sensibilities to the mainstream. The Nicolas Roeg film is just as strange and chilling 43 years after its release.

The contemporary surfeit of strong horror thrillers, which also include “We Are What We Are,” “Housebound,” “A Girl Walks Home Alone at Night,” is a product of two factors. The first should be obvious: America today is a profoundly unsettling place to live in. While mass shootings have become a daily reality in the United States, the current election season represents the biggest threat to our democracy in decades. The Republican nominee has threatened to expel millions of Latinos and put Muslims in a Nazi Germany-style registry if elected president. (At the current moment, he is even leading in the polls.)

But if filmmakers are returning to the horror genre to make fresh, innovative work, it’s not just a result of geopolitical unease. Mid-budget films, those that cost between $5 and $60 million, are practically an extinct species in Hollywood. In 1997, the average movie cost $60 million to make, a price tag that was—at the time—condemned as “disturbing”  in a New York Times report. “I’m horrified at these numbers,” Sherry Lansing, then the president of Paramount, told the Times. “They don’t make sense. We’re killing ourselves.”

Today, the average budget is well over $100 million—with studios betting increasingly bigger sums on a smaller number of movies. That prizes major tentpoles (“The Jungle Book,” “X-Men Apocalypse”) over the smaller films that used to be Hollywood’s bread and butter. Between 1997 and 2000, the top films of the year included “The Sixth Sense,” “Cast Away,” “As Good As It Gets,” “Contact,” “The Truman Show,” and “American Beauty,” all of which would have a difficult time getting made today by a major studio. Spike Lee, who made “Malcolm X” and “Do the Right Thing” at Universal, couldn’t even get financing for a sequel to “Inside Man,” a sizable hit that grossed $88 million at the American box office. His last film, “Da Sweet Blood of Jesus,” had to be crowdfunded.

In Jason Bailey’s must-read essay on the death of mid-budget films at Flavorwire, he spoke with Ted Hope, who produced the great “American Splendor” and Ang Lee’s “The Ice Storm.” An executive at Universal complained to Hope that his movies weren’t what the studio was looking for. “Ted, you need to give me movies that are theme park rides,” the exec said, as Hope recalls. This anecdote is tongue in cheek but remarkably prescient: Disney is enjoying record stock numbers because of its ability to turn its films into horizontal revenue machines. “Cars 2” sold over $1 million in merchandise, while California Adventure, formerly the company’s red-headed stepchild, was revamped as a mecca for Pixar fans.

Auteurs like Steven Soderbergh (“Traffic”), David Lynch (“Blue Velvet”), and John Waters (“Polyester”) have left the studio system, who have stopped producing the kinds of movies they make, but the horror genre may remain the last hope for mid-budget films and the filmmakers who produce them. Movies like “The Cabin in the Woods,” “Mama,” “The Visit,” “Green Room,” and the upcoming “Don’t Breathe” have proven that there’s still a demand for original ideas that grab audience interest, especially when the marketplace is dominated by sequels, reboots, and the next future rollercoaster.

“Lights Out” argues that the scariest thing is what’s lurking in the shadows, but as Hollywood proves, there’s nothing more terrifying than a world where “The Godfather” couldn’t exist. Next time, Coppola may just have to give Don Corleone a ouija board instead of a gun.

Horror Films It Follows Lights Out Movies The Babadook The Witch