Dems in Philly: What to look for as the Democratic Party nominates Hillary Clinton

Can Bernie placate his revolutionaries? Can Bill win over a new Democratic Party? Can Hillary change voters' minds? 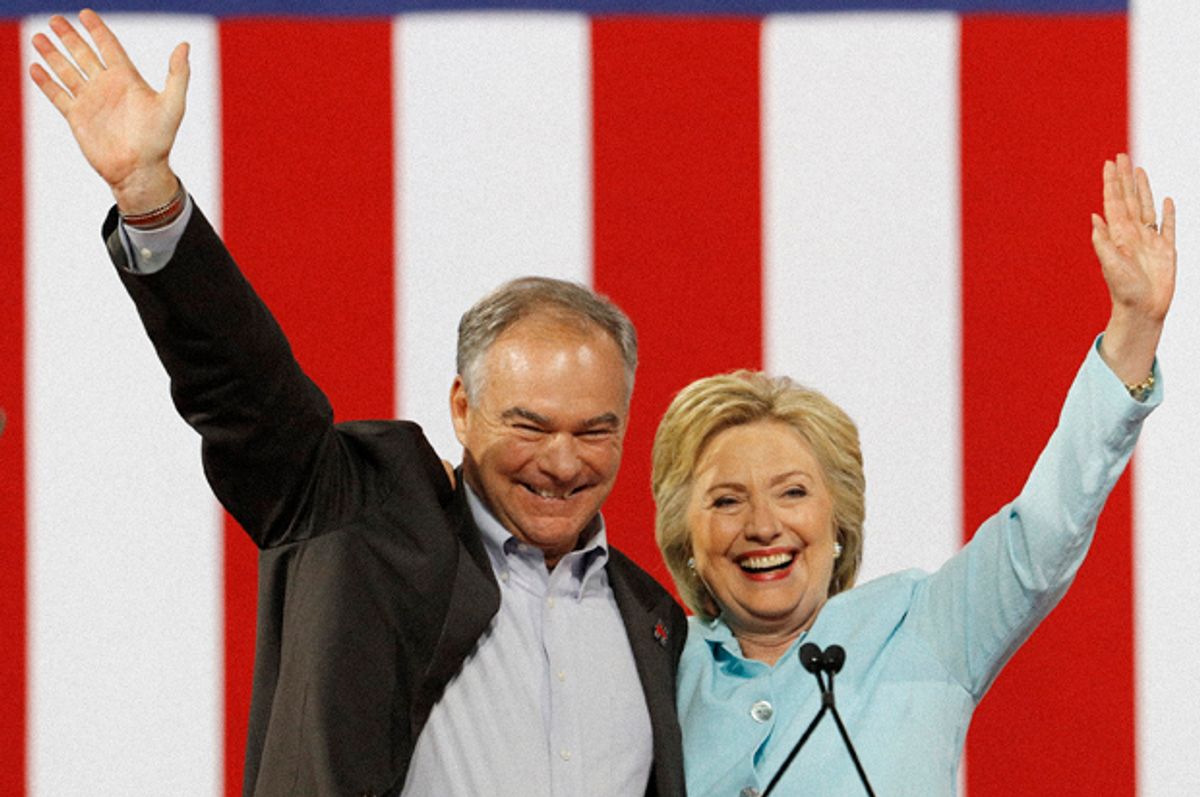 With their nominating convention kicking off today, Hillary Clinton and the Democrats stand to benefit handsomely from the hilariously bad example set by the Donald Trump and the Republicans. This is despite the sudden resignation of Debbie Wasserman Schultz as the Democratic National Committee chairwoman.

Last week’s GOP convention was an atonal chorus of disorganized, nativist screeds delivered by minor celebrities and Trump’s comically out-of-touch wealthy friends. The few nationally prominent Republican politicians who showed up to speak were there largely out of obligation, and in their remarks they made every possible effort to avoid mentioning their party’s nominee by name. And after four days of lackluster conventioneering, the nominee himself capped it all off with an acceptance speech that succeeded in somehow being both dull and horrifying at the same time.

Clinton, meanwhile, will have all the heavyweights of the Democratic Party lined up to shovel thick layers of praise upon her: the increasingly popular sitting president, the well-liked sitting vice president, her former rival for the Democratic nomination, the popular first lady, and her still-popular former president husband. They’ll be joined by a small army of Democratic senators, representatives, governors, and other state politicians. Such things are, of course, routine for presidential nominating conventions, but after the shambolic rake-stepping of the Trump show a garden-variety demonstration of party unity will probably make Hillary look pretty good.

Anyway, here are three of the most important things to look for over the coming few days of Democratic merry-making.

What will Bernie say?

The acrimony of the Democratic primary has long since receded, and Vermont Sen. Bernie Sanders – after a long period of passive resistance and party-platform negotiation – finally gave in and endorsed Hillary earlier this month. But there are still some raw feelings among Sanders supporters and delegates, a good number of whom were girding for a convention fight and don’t have any deep ties to the Democratic Party. Hillary really doesn’t want disaffected Sanders supporters to withdraw from the political process or seek out alternative candidates, and she’ll need Bernie to use the platform offered by the convention to make the pro-Clinton case to his supporters.

That will be a tough case to make, given how much time Bernie himself spent on the campaign trail nurturing the sense of alienation from major-party politics that so many of his supporters felt. He can, however, make the case that the Sanders movement has scored some important victories in moving the party to the left, and that a Clinton presidency is the best available option for seeing those victories translated into policy.

What will Bill say?

Obviously, Bill Clinton is speaking at the convention. Even if he weren’t married to the nominee, he’s still Bill Clinton, the popular ex-president who isn’t really happy unless he’s riffing on politics in front of a huge audience. But the party he’ll be addressing looks very different from the Democratic coalition of two decades ago, and it won’t necessarily be receptive to a nostalgic trip through the Clinton years.

The Democrats’ leftward tilt, as reflected in the popularity in the Sanders movement, has also contributed to changing views of Bill Clinton within the party. Democrats used to speak reverently of his economic record and offered it up his administration as a sort-of idealized version of Democratic economic policy. That assessment has been revisited as opposition to free-trade deals has mounted and liberals have turned a more critical eye on Clinton-era deregulation and criminal justice reforms. Again, Bill is still extremely popular within the party, but Clintonism as he defined it is no longer the unalloyed political asset it once was.

That being said, events like these are generally where Bill Clinton is at his best. The speech he gave at the 2012 Democratic convention was a detailed, enthusiastic defense of Barack Obama’s economic record and a pointed fisking of Republican political dysfunction, and it was generally viewed as the highlight of the convention.

What will Hillary say?

Hillary Clinton is in a thoroughly bizarre position. She is writing history with each moment as the first woman to be nominated for the presidency by a major party, and her Republican opponent is a toxic proto-fascist reality TV clod whose candidacy is an obvious threat to the health of the nation. And yet, despite occupying what looks like a position of commanding strength, she’s running distressingly close to Trump in early polling.

The best explanation for this is that while voters actively loathe Trump, they’re not much fonder of Hillary. She’s viewed as competent, but not especially trustworthy. There are various and sundry reasons for why she’s arrived at this point that don’t need to be explored here, but the nominating convention represents her best opportunity to start turning those numbers around. To that end, she should probably lay off attacking Trump directly – she’ll have more than enough people doing that for her and, frankly, she’s not as good at it as surrogates like Elizabeth Warren. Trump’s rhetorical dispatch from the terror dimension has set the table for Clinton to sell her strength-through-unity campaign message and offer herself as the inclusive, sane answer to the Republican’s blunt authoritarianism.

People often note that public opinion of Hillary tends to be ossified after more than two decades spent continuously in the national political spotlight, but Trump’s unique and unrelenting awfulness as a candidate represents a timely opportunity to get voters to start thinking more positively about Hillary Clinton.