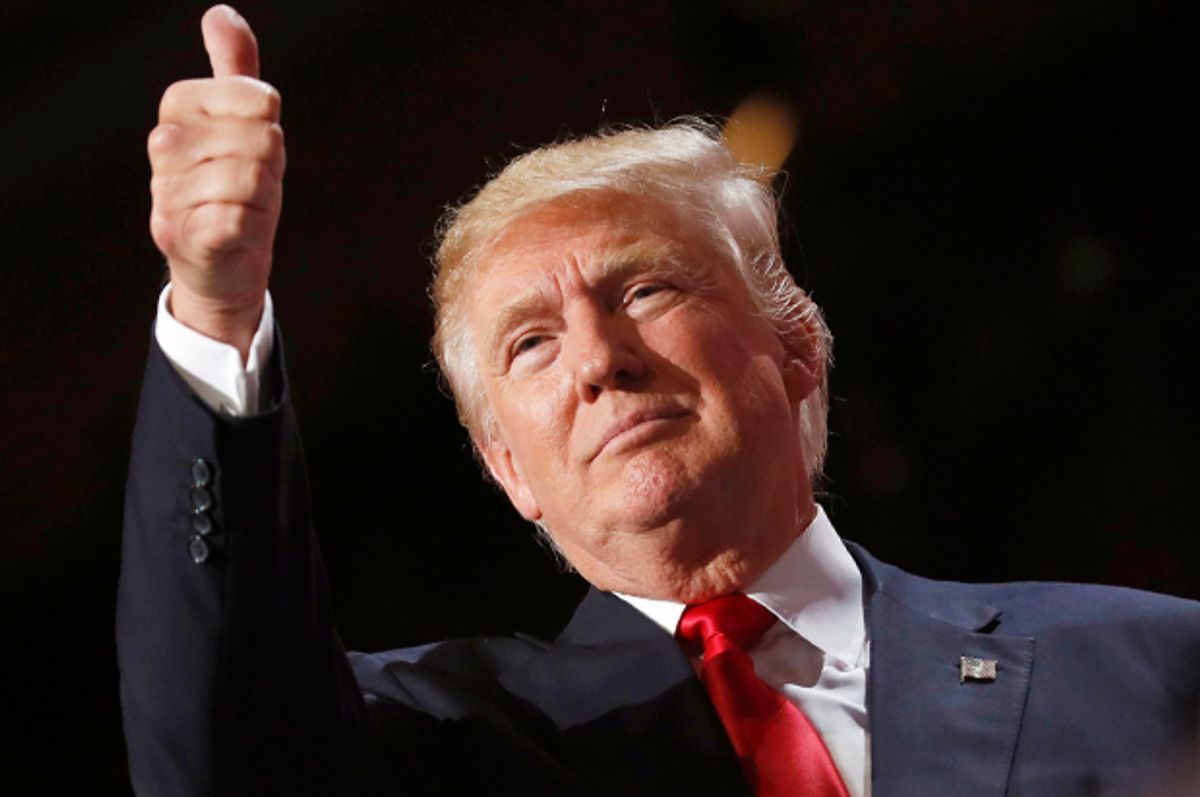 There was Donald Trump standing on the platform center stage at the Quicken Loans Arena basking in the moment the highest paid minds in media and politics told us over and over he would never have. What accounts for his improbable rise and what does it say about  where our nation is  really headed?

Just how did our corporate news media miss the amassing of the millions of mostly angry white voters with their pitchforks and torches that  helped Trump stage a hostile takeover of the GOP?

Could it be that the elites of both parties, and their media stenographers,  ignored the plight of poor whites for so long that they missed the explosion in their numbers,  even as they marched on the town square?

Certainly, people of such poor education and  such low social circumstance could not impact the politics of a nation so wordily and wealthy as America.  Perhaps,  the oversight  is understandable. After all, with no disposable income worth targeting, there was no reason to run any detailed analytics on poor whites, unless you were selling beer, guns and bibles.

The reality is that under the current Democratic occupant of the White House, and a Republican-controlled Congress, poverty has exploded and expanded from its traditional urban and rural concentrations  into America’s white suburbs. This precipitous deterioration happened as beltway leaders of both parties put their partisan gamesmanship and personal enrichment ahead of  attending to the increasing ranks of the nation’s poor and struggling working class of all colors.

In the early 1970s the country had well under 25 million poor people and by 2014, the more recent available data, it was approaching close to 48 million people. But the spike in the real numbers is only part of the story which could help to catapult Trump right into the White House.

According to the Brookings Institute’s “The Growth and Spread of Concentrated Poverty” between 2008 and 2012 our urban poor population grew overall by 21 percent “while in suburbs it more than doubled, growing by 105 percent.” Almost every major metropolitan area in the country saw the number of suburban families living in high poverty and distressed neighborhoods go up.

Over the same period the percentage of white households, living in census tracts where  at least 20 percent of the population is living below the poverty line, spiked from 30 percent to 37 percent. Concurrently the percentage of African-American and Latino households living in those depressed zip codes dropped by 4 percent. For foreign born families there was a 3 percent decline.

“Although severely concentrated disadvantage remains a predominantly urban phenomenon, suburbs now have nearly as many poor residents in high-poverty neighborhoods as cities. If these communities are ignored, they could become areas of concentrated poverty over time,” concludes the Brookings report.

From an electoral map standpoint it is important to grasp just how pronounced  this trend has been  in key battleground states. For hard hit folks in these states its going to be the candidate that  seems most likely to jump-start a moribund economy that will get the lion share of their votes.

How about those numbers for some snappy flip charts on Morning Joe?

Eight years after the “Hope and Change”  charade what we  have seen is a diversification of poverty that’s made it more inclusive, with upticks for white Americans, those  with a college degree and for those who are married.

No one is holding the leaders of either party accountable for this.

Meet 60 year old Ron Hiller Sr.  and his son Ron Jr., who is 30, with two kids back in Buffalo, where they’re both from. I met the white father and son team in Cleveland where they were proudly selling Trump paraphernalia. Ron Hiller Sr. has been following Donald Trump since January and set up shop outside Trump rallies around the country, making between $2,000 and $3,000 an event. He sees Trump like this era’s Roosevelt, a wealthy man concerned about his fellow Americans, whose wealth inoculates him from being bought off.

“He says what he means,” Hiller Sr. said. “He can’t do no worse than what we are doing right now. Nobody can. “

“The corporations are getting away with murder and the poor are just getting poorer,” Hiller told Salon.  “Trump is a rock star that we need right now to turn this around. This really changed my life.”

“My father worked at the steel plant for  forty years and he got lucky and he is going to retire but now they want to take away his retirement from him,” the elder Hiller said.  “My father is 84 years old, now they want to take his pension away. It’s crazy. He worked for that money, and oh, they don’t want to pay his medical anymore.”

Hiller, 60, says he worries for his son and his grand children that the economy he knew, in happier times decades ago, is never coming back, no matter whose in  charge. “He’s 30 and it is getting worse every day,” said Hiller.

“When I was coming up jobs were easy to get. Now they want you to work temporary in case they want to let you go,” Hiller said.  “And so you know these jobs come with no benefits  but you got kids and you need benefits.”

“They’ll want you to be  a temporary  for 90 days and they want to let  you work for 89 days , lay you off, and bring you back and say you got to start all over again. How is that right?”

“I worked at General Mills, I worked at Tyson” and serval others plants in Buffalo  that “are all gone and done, with the exception of Generals Mills” but with  their automation they “maybe got a hundred men working  when they had at one time  thousands.”

The prolonged foreclosure crisis, which  still ravages much of America, had a silver lining for the younger Hiller. Thanks to the greed of the banks, and the lack of any real meaningful relief for stressed homeowners, in Buffalo,  people just walked away from their homes, leaving them to deteriorate.  Young Hiller was able to benefit from the broader misery.

“It’s been tough. I had plenty of jobs,” says the 30-year-old Hillier. “I worked for demolition for five years and I was making $50 an hour in order to knock down houses in Buffalo. We were knocking down two houses a day  for seven to eight months. Your taking beautiful houses and we were knocking them down.”.

“I just don’t think it can get much worse than it has been with us having something like $19 trillion dollars in debt,” Hiller said.

Both Hillers think Trump will be able to bring back the factories that once made Buffalo a vibrant city.

Trump feels their pain but can he remedy their condition?

While Donald Trump the presidential candidate has blasted U.S.multinationals for outsourcing and shipping jobs out of the county, Trump the business man has imported huge quantities of apparel goods made in China as well as applying for more than a thousand  foreign workera for nine of his companies.

When it comes to doing business Trump is a total pragmatist. Trump had no problem doing business with the crooked  Azerbaijani oligarchy when he built a hotel complex there.

On two occasions this campaign season I have had a chance to ask Donald Trump questions directly. In October of 2015 I interviewed him on the devastating impact for  trades people and  small business owners in Atlantic City when Trump avoided having to pay them by filing for corporate bankruptcies no less than four times.

"That's part of the process," he told me, acknowledging  that his strategy of using  bankruptcy had a real consequences for small businesses and other unsecured creditors. "I wanted to use the bankruptcy law to my own advantage. Should I have used it to somebody else's advantage? These people may have gotten clipped at the end, but they made a lot of money along the way with me.”

These days Trump is hoping his campaign stance  opposing past U.S. free trade deals will bring him crossover votes from disaffected Senator Sanders supporters  He’s also counting on wooing rank and file union members, who at one time, ignored their leaders,  and voted for Ronald Reagan

“I have visited the laid-off factory workers, and the communities crushed by our horrible and unfair trade deals,” Trump told delegates the night of his acceptance speech. “These are the forgotten men and women of our country. People who work hard but no longer have a voice.”

“We are going to be considerate and compassionate to everyone. But my greatest compassion will be for our own struggling citizens,” Trump said further into the speech.

Struggling Americans have heard this kind of soaring rhetoric before,  only to see their actual situation continue to deteriorate. Plus, the historical Trump the businessman we have already known,  has been long on self interest but  really short on compassion in his corporate dealings.

He has got to be pressed by the media for specifics.

In September 2015 when he was pitching his tax policy I went to the press conference. Trump's plan included a major corporate tax cut to encourage US multinationals to re-patriate trillions of dollars in so called  ’stranded off-shore profits’.

I pointed out that the last big multinational corporate tax  holiday in 2004,  enacted by President George W. Bush, had not delivered on the kind of job creation its boosters had promised.

I asked Trump to connect the dots between his proposal to cut corporate taxes and bringing back to work the millions of idle American workers when he correctly references our historically low work force participation rate numbers.

He raised the issue of corporate inversions, the practice by which USA companies change  their national identity to more friendly tax authorities overseas. Trump believes his corporate tax cut would encourage corporations to give the US a second look, while bringing a lot of money back into the US economy for business and plant expansion.

”They think it is $2.5 trillion dollars. I think it is much more than that. I actually  think it is going to be more money than that and boy if it is, we have hit pay dirt,” Trump said

I followed up by asking him if he would consider using the tax cuts as leverage to  require that corporations start paying their interns and end the widespread practice of getting millions of kids to work for free.

He punted. The big talker flinched at getting real.  “When you get the money coming back in, beyond tremendous  things happen,” Trump said.

In 2008 it was “hope and change.” Eight hears later its  “beyond tremendous.”