Shades of the Cold War: How the DNC fabricated a Russian hacker conspiracy to deflect blame for its email scandal 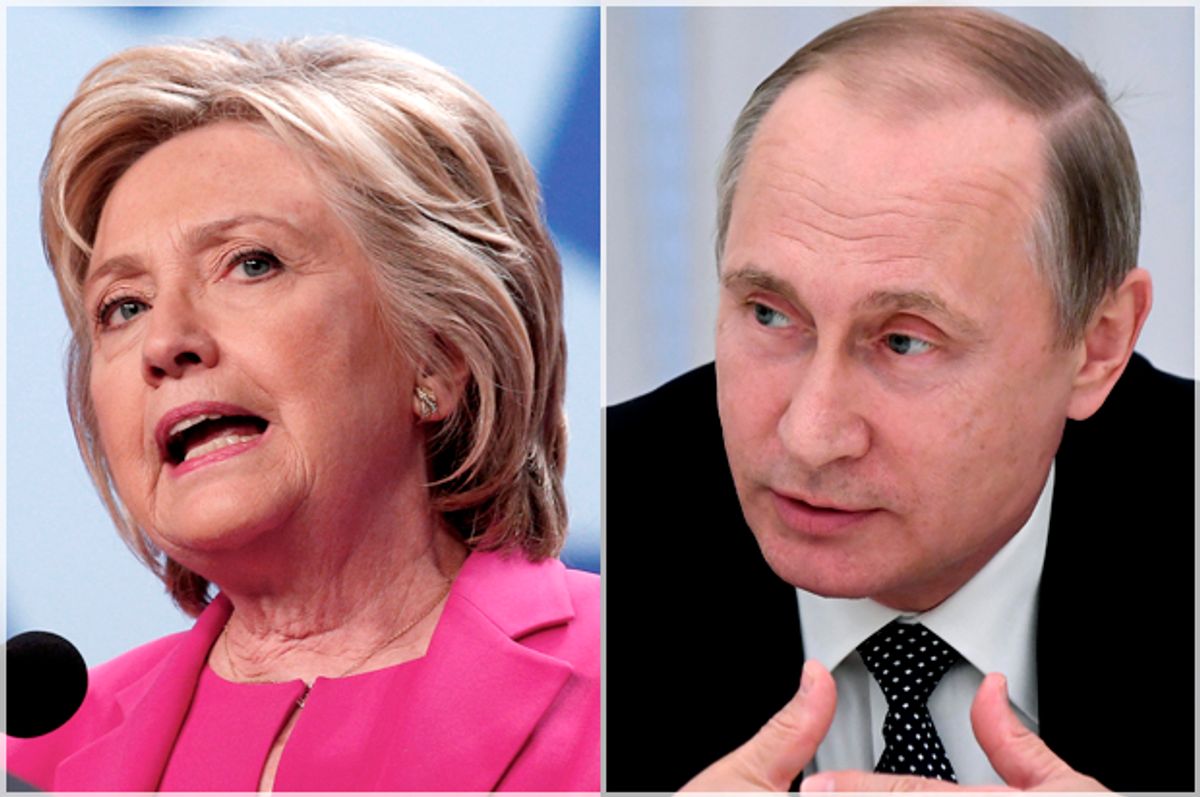 Now wait a minute, all you upper-case “D” Democrats. A flood light suddenly shines on your party apparatus, revealing its grossly corrupt machinations to fix the primary process and sink the Sanders campaign, and within a day you are on about the evil Russians having hacked into your computers to sabotage our elections — on behalf of Donald Trump, no less?

Is this a joke? Are you kidding? Is nothing beneath your dignity? Is this how lowly you rate the intelligence of American voters? My answers to these, in order: yes, but the kind one cannot laugh at; no, we’re not kidding; no, we will do anything, and yes, we have no regard whatsoever for Americans so long as we can connive them out of their votes every four years.

Clowns. Subversives. Do you know who you remind me of? I will tell you: Nixon, in his famously red-baiting campaign — a disgusting episode — against the right-thinking Helen Gahagan Douglas during his first run for the Senate, in 1950. Your political tricks are as transparent and anti-democratic as his, it is perfectly fair to say.

I confess to a heated reaction to events since last Friday among the Democrats, specifically in the Democratic National Committee. I should briefly explain these for the benefit of readers who have better things to do than watch the ever more insulting farce foisted upon us as legitimate political procedure.

The Sanders people have long charged that the DNC has had its fingers on the scale, as one of them put it the other day, in favor of Hillary Clinton’s nomination. The prints were everywhere — many those of Debbie Wasserman Schultz, who has repeatedly been accused of anti-Sanders bias. Schultz, do not forget, co-chaired Clinton’s 2008 campaign against Barack Obama. That would be enough to disqualify her as the DNC’s chair in any society that takes ethics seriously, but it is not enough in our great country. Chairwoman she has been for the past five years.

Last Friday WikiLeaks published nearly 20,000 DNC email messages providing abundant proof that Sanders and his staff were right all along. The worst of these, involving senior DNC officers, proposed Nixon-esque smears having to do with everything from ineptitude within the Sanders campaign to Sanders as a Jew in name only and an atheist by conviction.

Wasserman fell from grace on Monday. Other than this, Democrats from President Obama to Clinton and numerous others atop the party’s power structure have had nothing to say, as in nothing, about this unforgivable breach.They have, rather, been full of praise for Wasserman Schultz. Brad Marshall, the D.N.C.’s chief financial officer, now tries to deny that his Jew-baiting remark referred to Sanders. Good luck, Brad: Bernie is the only Jew in the room.

The caker came on Sunday, when Robby Mook, Clinton’s campaign manager, appeared on ABC’s “This Week” and (covering all bases) CNN’s “State of the Union” to assert that the D.N.C.’s mail was hacked “by the Russians for the purpose of helping Donald Trump.” He knows this — knows it in a matter of 24 hours — because “experts” — experts he will never name — have told him so.

Here is Mook on the CNN program. Listen carefully:

Is that what disturbs you, Robby? Interesting. Unsubstantiated hocus-pocus, not the implications of these events for the integrity of Democratic nominations and the American political process? The latter is the more pressing topic, Robby. You are far too long on anonymous experts for my taste, Robby. And what kind of expert, now that I think of it, is able to report to you as to the intentions of Russian hackers — assuming for a sec that this concocted narrative has substance?

Making lemonade out of a lemon, the Clinton campaign now goes for a twofer. Watch as it advances the Russians-did-it thesis on the basis of nothing, then shoots the messenger, then associates Trump with its own mess — and, finally, gets to ignore the nature of its transgression (which any paying-attention person must consider grave).

Preposterous, readers. Join me, please, in having absolutely none of it. There is no “Russian actor” at the bottom of this swamp, to put my position bluntly. You will never, ever be offered persuasive evidence otherwise.

Reluctantly, I credit the Clinton campaign and the DNC with reading American paranoia well enough such that they may make this junk stick. In a clear sign the entire crowd-control machine is up and running, The New York Times had a long, unprofessional piece about Russian culprits in its Monday editions. It followed Mook’s lead faithfully: not one properly supported fact, not one identified “expert,” and more conditional verbs than you’ve had hot dinners — everything cast as “could,” “might,” “appears,” “would,” “seems,” “may.” Nothing, once again, as to the very serious implications of this affair for the American political process.

Now comes the law. The FBI just announced that it will investigate — no, not the DNC’s fraudulent practices (which surely breach statutes), but “those who pose a threat in cyberspace.” The House Intelligence Committee simultaneously promised to do (and leave undone) the same. This was announced, please note, by the ranking Democrat on the Republican-controlled committee.

Bearing many memories of the Cold War’s psychological warp — and if you are too young to remember, count your blessings — it is the invocation of the Russians that sends me over the edge. My bones grow weary at the thought of living through a 21st century variant. Halifax, anyone?

Here we come to a weird reversal of roles.

We must take the last few days’ events as a signal of what Clinton’s policy toward Russia will look like should she prevail in November. I warned in this space after the NATO summit in Warsaw earlier this month that Cold War II had just begun. Turning her party’s latest disgrace into an occasion for another round of Russophobia is mere preface, but in it you can read her commitment to the new crusade.

Trump, to make this work, must be blamed for his willingness to negotiate with Moscow. This is now among his sins. Got that? Anyone who says he will talk to the Russians has transgressed the American code. Does this not make Trump the Helen Gahagan Douglas of the piece? Does this not make Hillary Clinton more than a touch Nixonian?

I am developing nitrogen bends from watching the American political spectacle. One can hardly tell up from down. Which way for a breath of air?