She had to go: Schultz's resignation will hopefully start the healing within the Democratic Party 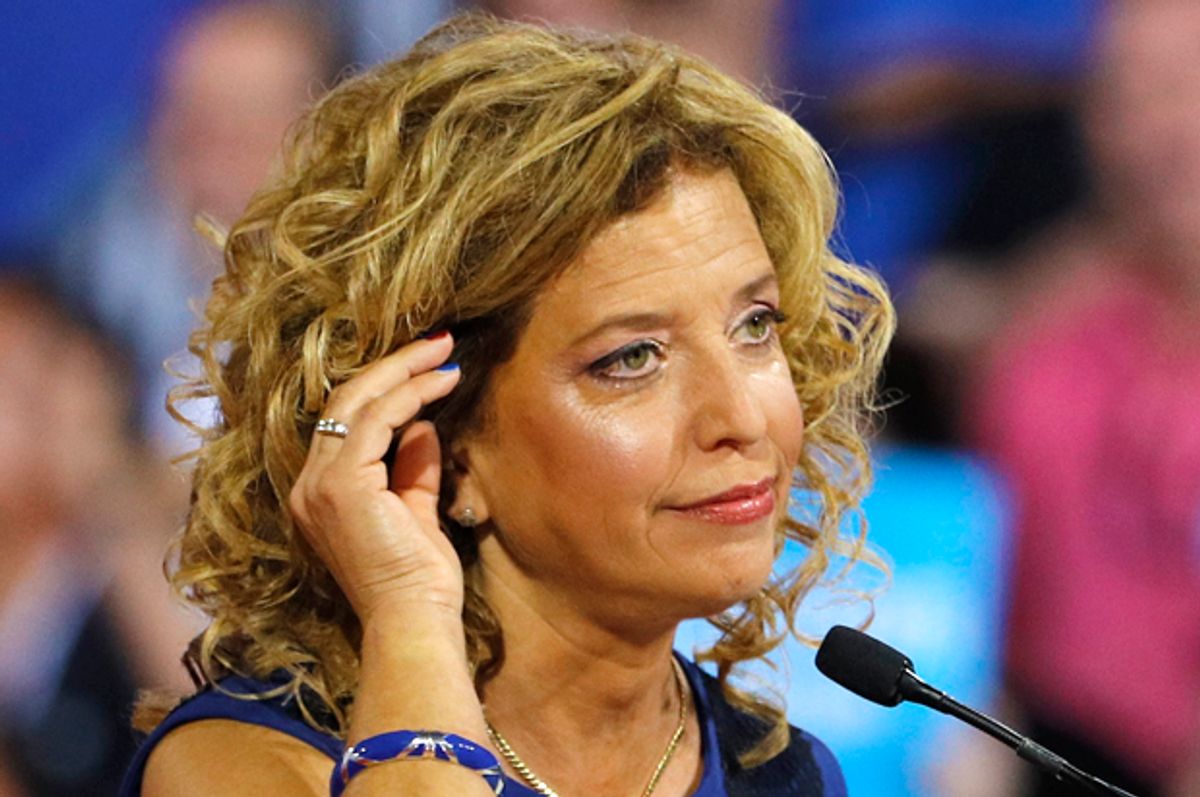 After the successful, buttoned-up production of the Clinton campaign vice presidential pick on Friday it seemed the narrative of the Democratic convention would be starkly different from the hectic, chaotic RNC. (Trump's VP rollout may have been the worst in history with leaks and second guessing and delays culminating in a "60 Minutes" joint interview that looked like the most uncomfortable partnership since Eddie Van Halen and David Lee Roth.)

That's not to say that everyone was thrilled with her choice.  In fact, there was a lot of grumbling from the left that Sen. Tim Kaine is too centrist and there were many (including yours truly) who felt it was a missed opportunity to electrify the party with a more unconventional choice like Senator Elizabeth Warren or Labor Secretary Tom Perez.  But the rollout itself was handled masterfully, with no official leaking and what most people saw as a good introduction for Tim Kaine. After a week of dystopian demagoguery and an acceptance speech worthy of a banana republic dictator, the Democrats thought they were looking at a smooth and upbeat convention without a whole lot of drama, which was just what they wanted.

And then all hell broke loose. The emails that had been previously reported to have been stolen by Russian hackers (possibly at the behest of the Russian government) were released by Wikileaks and confirmed what had long been suspected  — that high-level executives and staffers at the DNC had been actively hostile to the Sanders campaign. The Sanders contingent already gathering in Philadelphia for the convention were outraged and the various protests and challenges that were already scheduled took on a new urgency. Demands for action were instantaneous and the narrative of competence and unity that the Clinton campaign and the DNC had hoped would open the convention exploded all over Philadelphia.

The documents did not show any actual manipulation of the race but nonetheless the idea of any Democrat seeking to use someone's religious beliefs against them or party officials going beyond shooting the breeze among their colleagues to actually propose smearing a candidate they don't personally prefer is just wrong. That it wasn't acted upon is really beside the point. These DNC employees had no business even thinking in these terms much less communicating this way among themselves. It was inevitable there would be an outcry and a reckoning once it was proven that had happened.

The fact that Debbie Wasserman-Shultz, a long time nemesis of the progressive wing of the party, was at the helm and personally involved made it all the more imperative that swift action be taken. For many years she has been a living example of party establishment big-footing progressives in House primary campaigns, going back to when she worked for the Democratic Congressional Campaign Committee under Rahm Emmanuel and ran its red to blue program. Progressive Sanders supporters had good reason to be suspicious and documented proof of her hostility toward the Sanders campaign was the last straw. There would be no unity with her in charge.

Less publicly known was the apparent disdain in which she was also held by the establishment. According to this article in Politico high-level members of the Clinton campaign, including campaign chairman John Podesta, had wanted her out for some time but the president wasn't interested in getting into an internecine battle in the last year of his administration so he didn't make the move. From the various new reports it was clearly very difficult to find anyone to speak up for Wasserman-Shultz's job performance.

At mid-day Sunday it was announced that she would be stepping down as DNC chair, given a face-saving but powerless "honorary" title and would be replaced by long time Democratic stalwart Donna Brazile, an experienced hand who had run Jesse Jackson's campaign and who knows a little something about how to bring a party together after a fractious primary. Some of you may remember this from 1988:

In a move that sets the stage for a potential fight over delegates at the Democratic National Convention, the Rev. Jesse Jackson's campaign plans to send a letter to Gov. Michael S. Dukakis charging that the nomination process is ''inequitable,'' ''demonstrably unfair'' and ''distorted by rules that favor insider politics.''

That convention was quite dramatic, with a restless left wing led by a charismatic leader coming to the convention with a list of demands. (The media refrain then was "what does Jesse want?") And some people may also recall that one of Jackson's most ardent supporters back in the 80s was none other than the mayor of Burlington Vermont, Bernie Sanders.  The Sanders camp was reportedly very pleased with the Brazile appointment which may be because of that long ago association.

This tension between the reformers and the establishment, the insider vs the outsiders, is ongoing and healthy.And  it's certainly nothing new for the Democratic Party.

Both Senator Sanders and his combative campaign manager Jeff Weaver were obviously upset but satisfied with Wasserman-Shultz's resignation and made it clear in media appearances that Sanders did not intend to change his plan to endorse and work for the Clinton victory against the demagogue Donald Trump.  Weaver spoke with Chuck Todd on MSNBC and sounded downright optimistic about future reforms:

TODD:  I was going to say does the resignation tell -- should your supporters say, this resignation should show you that you're actually welcome in the Democratic Party?

TODD:  They want you in?

WEAVER:  You can make a difference.  Yes.

WEAVER:  It's a very positive development.  I think it bodes well for the future of the party.

Sanders himself thanked Wasserman-Shultz for her years of service but emphasized the lesson that one hopes will be learned by all future party operatives: "The party leadership must also always remain impartial in the presidential nominating process, something which did not occur in the 2016 race." If they could carry that into the down ticket primaries as well, we might really get someplace.