"The Night Of" recap: The new, terrifying reality sets in 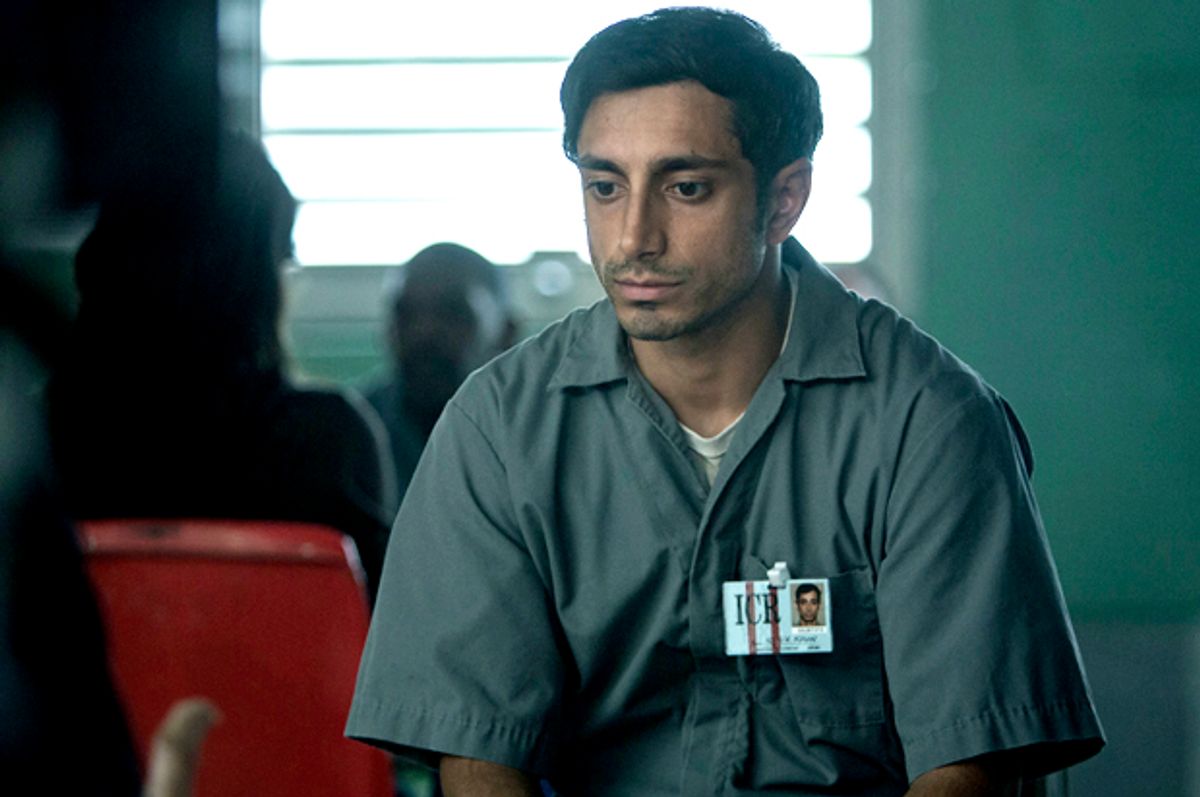 [Note: The following recap includes plot details of the third episode of "The Night Of."]

"The Night Of" has already distinguished itself as an extraordinarily intelligent crime drama, one that fuses the finer, more technical arts of filmmaking with a kind of literary pathos. Naz’s predicament is positively Kafkaesque; and his attorney, Jack Stone, whose cunning is obscured by his raw, eczema-scarred feet, feels like a figure in one of Flannery O’Connor’s allegorical grotesqueries. But, in this third episode, “A Dark Crate,” the show calls to mind the works of Dostoevsky — particularly in its profoundly personal examination of what it is like to become a prisoner, whether you’re locked in a literal cell or in a hell of bureaucracy, uncertainty, or even your own loneliness.

Like "The Wire," this show comes with its own inherent literary pedigree. The former show’s creative driving force, David Simon, is a journalist, and this often made watching any particular season of "The Wire" feel like enjoying one of those immerse long-reads that takes over an entire Sunday. However, "The Night Of" writer Richard Price is a novelist, and this allows him to throw in the kind of odd and seemingly discordant details that make for truly rich, unique fiction, like Jack Stone cracking wise at a group therapy session for other men with eczema (just before, unbeknownst to him, he is about to lose his flagship client to a chic-suited corporate lawyer) or Detective Box telling one of the young beat cops who arrested Naz that, despite the rookie’s justified desire to scrub his reaction to his first dead body (copious vomiting) from the police report, he must keep it in, so that the gravity of the crime can balance Naz’s wall-eyed innocence, and Freddy, the kingpin of Riker’s Island (Michael K. Williams) summoning Naz to his cell, offering his protection by way of comparing the younger man to a piece of veal—a lamb made soft and silken by its lack of exposure to the outside world, an animal whose time in that dark crate breaks it down, makes it ripe to be ripped apart, devoured.

The strength of that metaphor resides in Naz’s central dilemma once he arrives at Riker’s Island — does he attempt to go it alone (even though his days feel like a hopscotch through constant peril) or does he throw his lot in with a terrifying criminal (even if that might be his only way of making it to another morning)? The strength of this dilemma resides in Riz Ahmed’s performance. Even in the course of just three episodes, Ahmed has shown Naz’s transformation from a quintessential college kid to a bombed-out survivor with remarkable deft and nuance. The sweet skittishness of early Naz has been replaced with a quiet tremulousness. The guard doing Naz’s intake asks him if he fears for his life, and Ahmed’s line reading of his reply, “should I?” is perfect: a mix of flippant and genuinely concerned. Naz’s time in prison is a low-key thrumming of terror punctuated only by higher, more pronounced moments, like when a group of heavily-muscled, heavily-tattooed inmates ask Naz whether he “raped that girl.”

Their primal indignation over the sexual nature of Naz’s alleged crimes is stark contrast to the ways that the courts process things; raw, dripping emotionality against the dispassionate grind of the law. Jack Stone’s attempt to haggle a plea with Helen, the D.A. handling the case (and wonderfully played by Jeannie Berlin), is more about strategy and PR plays than about the actualities of the case. Jack lays it all out to Naz’s parents—the motions, the filings, the phone-calls, and, of course, the lattes; the worst thing that has ever happened to them turned into work-a-day drudgery. This drudgery follows Salim Khan (Peyman Moaadi) as he endeavors to get his cab, his sole means of income, out of evidence—and the only way he can do this would be to press charges against his son for stealing it. Moaadi conveys such exasperation in a simple look, and he is amply matched by Poorna Jagannathan as Safar Khan, Naz’s mother, who has begun to unravel, not only from the scale of what is happening to her family, but from the smaller indignities of her new reality (her face, as she is crudely frisked by a guard, is a mask of sorrow and rage). No wonder, then, that the Khans are so amenable to Alison Crowe (Glenne Headly), a soft-spoken power-attorney who brings her associate, Chandra (Amara Karan) in tow (after she decides that Chandra’s home country, India, is “close enough” to Pakistan) to poach them from Jack Stone.

On the surface, of course, this decision makes perfect sense: Crowe is polished (for one thing, her feet don’t reek of Neosporin) and far more established; she does and says all of the right things (right down to the fact that she and her firm will do this work pro bono). But this is where the novelistic layering of details becomes so powerful, and so purposeful. The Khans don’t know, as we do, that, upon spotting a story on Naz’s case on the evening news, Crowe whips out her phone to demand the address of “the Khan kid killer;” whereas Jack simply refers to Naz as “the Khan kid,” or, “the kid.” They don’t see the ways she subtly demeans her brown-skinned associate while spouting all of the right anti-racist rhetoric on TV. And they certainly don’t see Jack walking by the crime scene, making the decision to rescue Andrea’s poor, abandoned cat—even though simply touching the beastie will exacerbate his allergies. We, as the viewer, know that Jack is more valiant than he seems, and that he feels a genuine protectiveness toward all lost creatures, particularly their son.

In what any college literature professor would call a beautiful parallel, Naz finds another protector-figure in Freddy, who is as silent and formidable as Stone is boisterous and demeaned. Freddy is the show’s most singular and compelling character to date: His power and wisdom come from a dark, sorrowful place that I simultaneously fear and long to learn more about. Michael K. Williams is, simply put, one of the finest actors working today—his ability to imbue his characters with both wit and menace (as typified in his signature role, that of Omar Little, shotgun-toting Robin Hood of "The Wire"’s Baltimore) rivals Marlon Brando’s. Freddy is a man who has everything, even in captivity—sex with fulsome guards, a crew who obeys his every whim, and continuing influence in the outside world—and yet, there is something unmistakably lonely, even yearning in him. He kids Naz for being “so polite and shit,” yet addresses him by his real name, not his nickname—and when he asks, “Nasir, do you want my protection?” it feels less like a Vito Corleone making an offer that can’t be refused, and more like a weary man extending an offer of companionship. Freddy is terrifying not only because of his history of violence, but because, as Williams plays him, violence has become as routine to him as Jack Stone’s trips to the dermatologist. And this means that he has nothing to lose. So the issue of whether or not Naz will align with a man who is (as the clippings on his cell walls attest) a true-blue criminal, and what such an alliance will do to his soul, is as captivating as anything that may happen once the trial begins.