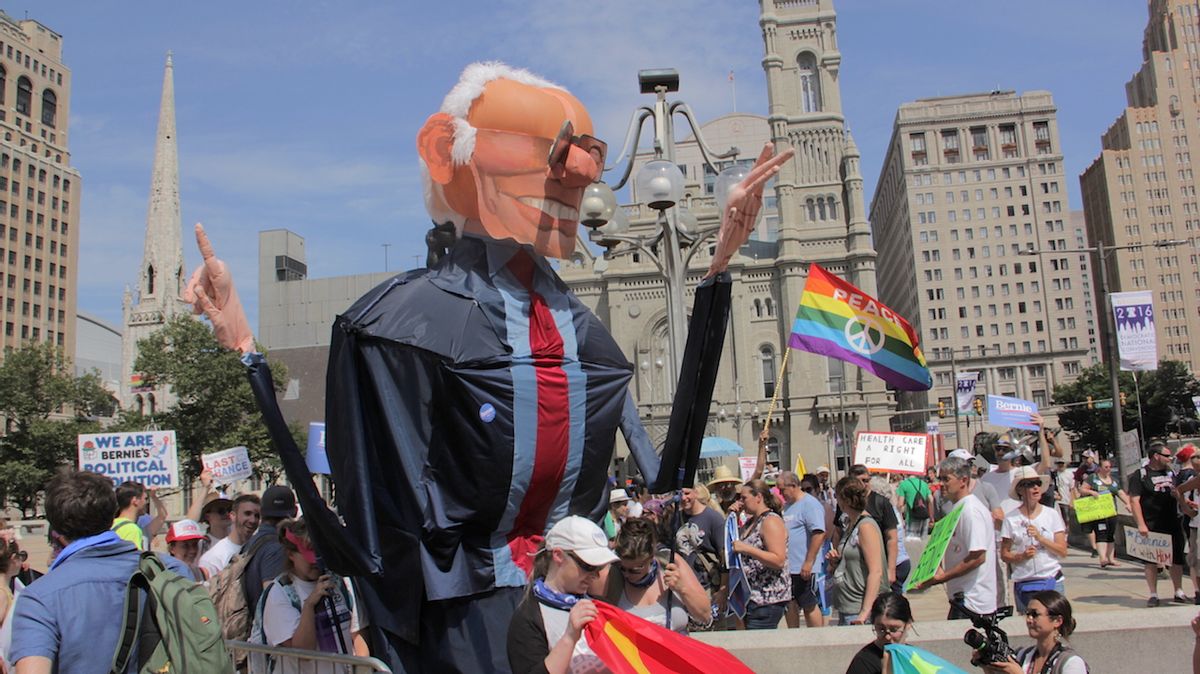 Bernie Sanders supporters at a protest at the 2016 Democratic National Convention in Philadelphia on Sunday, July 24 (Salon/Ben Norton)
--

Protesters kicked off the Democratic National Convention in Philadelphia on Sunday with large demonstrations in support of Bernie Sanders.

Thousands gathered in the sweltering 100-degree heat and marched across the city. In one demonstration, dubbed "March for a Clean Energy Revolution," protesters called for a ban on fracking and a move toward renewable energy.

In another, called "#March4Bernie in Philly Against the DNC," thousands of protesters chanted in opposition to Hillary Clinton and the Democratic National Committee.

A wide variety of organizations participated in the march. Some chanted "Stop the TPP!"; "Black lives matter!"; "We are the 99 percent!"; "Not me, us!"; "Hell no DNC, we won't vote for Hillary!" and more.

One protester held up a sign calling for a "Demexit," a play off the phrases Brexit and Grexit.

When asked what she meant with the sign, Paula Iasella told Salon, "It means progressive Democrats exiting the Democratic Party."

Iasella said she thinks many progressive Democrats will do one of three things: "vote for Jill Stein, write Bernie in or not show up."

"Just because Sanders endorsed her doesn't mean that we have," she added.

"The DNC needs to take this for real, because it's serious. There's a lot of mad people out there, a lot of angry people, and they haven't evaporated."

Iasella said she was there to support Sanders and to protest the DNC. "So yes, #NeverHillary, #NeverTrump, all #StillSanders — all the clichés."

Protesters chanted a variety of slogans, including some from the Occupy and Black Lives movements. They shouted: "We don't need no super PAC!"; "We are the revolution!"; "No Trump, no Hill, the working class has had its fill!"; "Shut it down!"; "What do we want? Democracy! When do we want it? Now!"; "Lock her up!" and "Jill Stein!"

Salon spoke with Kshama Sawant, a Seattle city councilmember and one of the only elected socialists in U.S. politics.

"The solution is not to go back into the Democratic Party," she added. "We need an independent party of the 99 percent."

Sawant is a leader in the party Socialist Alternative. She said those continuing the political revolution outside of the Democratic Party "are beginning the process of building an independent party."

Several marchers wore shirts from the group Veterans for Bernie. Jared Murphy, a Philadelphia-based Sanders supporter who served in the U.S. Air Force, told Salon, "It's easy to support Bernie. It's pretty hard to give a reason why you wouldn't want to."

Murphy said many veterans have helped organize Sanders' rallies and have worked on his campaign.

"The big reason that veterans support him so much," Murphy said, noting also that active-duty servicemembers are some of Sanders' top individual contributors, is because "he's the only one who doesn't want to send us off to wars we have no business being in."

The Equality Coalition for Bernie Sanders, an international organization that still backs the self-declared democratic socialist senator, also had a contingent in the march.

"We don't want the establishment, and we will not tolerate it anymore," Curcio added.

"We are part of the social revolution, not the political revolution," he said. "We take the voices and morality and Bernie Sanders and Jill Stein, and we make them happen in our communities."

A Canadian joined in the demonstration too. Krista Siaoli held a sign reading "Canadians 4 Bernie."

"Even though I can't vote for Bernie, I can come out here and support him," she told Salon.

Siaoli, who is from British Columbia, now lives in Portland. She said there are "so many reasons" she supporters Sanders over Clinton and other alternatives.

"He's the only person up at that level of government that has integrity," Siaoli emphasized.

One man at the demonstration was even selling Bernie Sanders condoms.