Sanders repeatedly asked his supporters to play nice, but they went after Hillary right from the start of the DNC 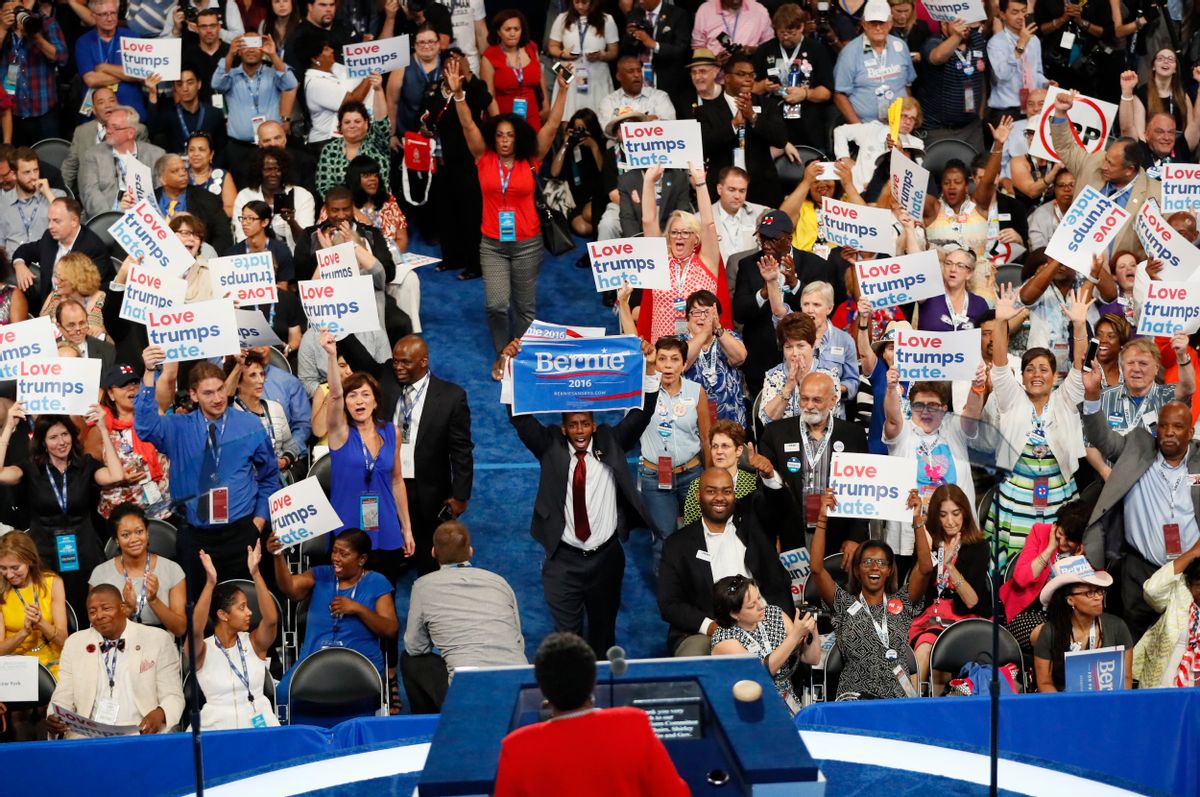 For a brief, shining moment on the first day of the Democratic National Convention in Philadelphia, it seemed that things were going to proceed smoothly, despite a contentious primary between Hillary Clinton and Bernie Sanders. There had been talk among Sanders supporters of walkouts and booing, but Sanders had sent out an email to delegates, asking them to refrain.

At first, it seemed it might work. The tone on the floor before the gavel drop was cheery, in strong contrast to the doom-and-gloom environment of the RNC in Cleveland the week before. Boyz II Men sang “Motownphilly," and both Sanders and Clinton supporters boogied to the sweet sounds of 90s-era doo-wop-inflected R&B. Everyone had a cackle when Stephanie Rawlings Blake forgot that she actually need to pound the gavel when kicking off the convention.

But things went sour quickly, when Dr. Cynthia Hale offered an invocation that mentioned Clinton’s name. Without a moment’s thought of what it looks like to interrupt a prayer on national television, Sanders supporters in the crowd started booing and chanting, “Bernie! Bernie!”

It set the tone for the next couple of hours. Nearly every time Clinton’s name was spoken, a loud and angry crowd of Sanders supporters erupted in outrage, booing as if they could somehow overcome the popular vote through decibel levels. Rep. Marcia Fudge could barely get through her speech, due to the overwhelming ugliness from the crowd.

“Thank you or not, as the case may be,” Barney Frank, a frequent critic of Sanders, snarked in response to this sauciness from Sanders supporters.

The scene had unfortunate racial undertones. It did not go unnoticed on Twitter that black women often got booed the worst when speaking, and that Rep. Elijah Cummings was interrupted with chanting about the TPP when he was trying to speak about civil rights. Considering that Sanders performed better with white people and Clinton much better with voters of color, this was a bad look.

The whole display was puzzling, because all the available evidence shows that Sanders supporters are not actually blind with Clinton hatred at all. Polling data shows the vast majority of Sanders supporters plan to vote for Clinton. But there were early hints of just how off-the-rails the anger was getting when, earlier in the day at a Sanders rally, his supposed supporters booed him when he asked them to support Clinton.

“Bernie’s a smart guy and he knows how to play politics,” Sarah Knowlton, a delegate from Indianapolis, said when asked about the earlier booing. “I think he was saying it because he thinks he has to.”

“I don’t think he knows or understands,” she continued, “that there’s still so many people behind him, that are Bernie or bust.”

When asked if she was Bernie or bust, Knowlton said, “I’ll vote for Bernie as many times as I can, but when I can’t vote for Bernie anymore, yeah, I’ll make sure that Donald Trump is not the next president of the United States.”

Another Sanders delegate from Michigan, Khesha Duncan, showed the same unwillingness to say anything positive about Clinton. Even though she said she loved Barack Obama — though not as much as she loves Sanders — she did not have the same enthusiasm for Clinton, calling her the “lesser of two evils”.

“I understand the excitement for the first woman president,” Duncan added. “But that’s about all I can say.”

Speaking with Clinton supporters, however, a different attitude towards the opponent emerged. Maureen McKenna and Sandra McClinton of the Democratic Women’s Club of Florida expressed enthusiasm for hearing Sanders speech.

“Well, I always liked him and admired him,” McClinton said, adding that she simply feels Clinton is “more qualified candidate we’ve ever had”.

“We appreciate all his efforts and that he has always caucused with the Democrats,” McKenna added, “but we’re looking forward to Hillary.”

But while McClinton and McKenna were mildly positive about Sanders, they didn’t feel the same about some of his supporters. When asked about the booing of Sanders earlier that day, McKenna joked that Sanders is trying to “tame the dragon”.

This disparity was felt in the crowd’s energy. While Sanders was mentioned repeatedly throughout the day, few, if any Clinton supporters booed at the sound of his name.

Eventually, the booing of Clinton did trail off, though it never stopped completely.

Perhaps Sanders supporters really heard and took seriously Wellington Webb’s speech, which featured the Denver mayor declaring that both Sanders and Clinton “deserve our cheers”. Perhaps they just got tired.

But it was sadly too late. The narrative about embittered Sanders supporters putting their anger at losing ahead of party unity, despite the very real danger of a Donald Trump win, was already the story of the night.