Barack Obama reclaimed patriotism for the left: How his 2004 DNC speech made a hopeful, inclusive America a core liberal value 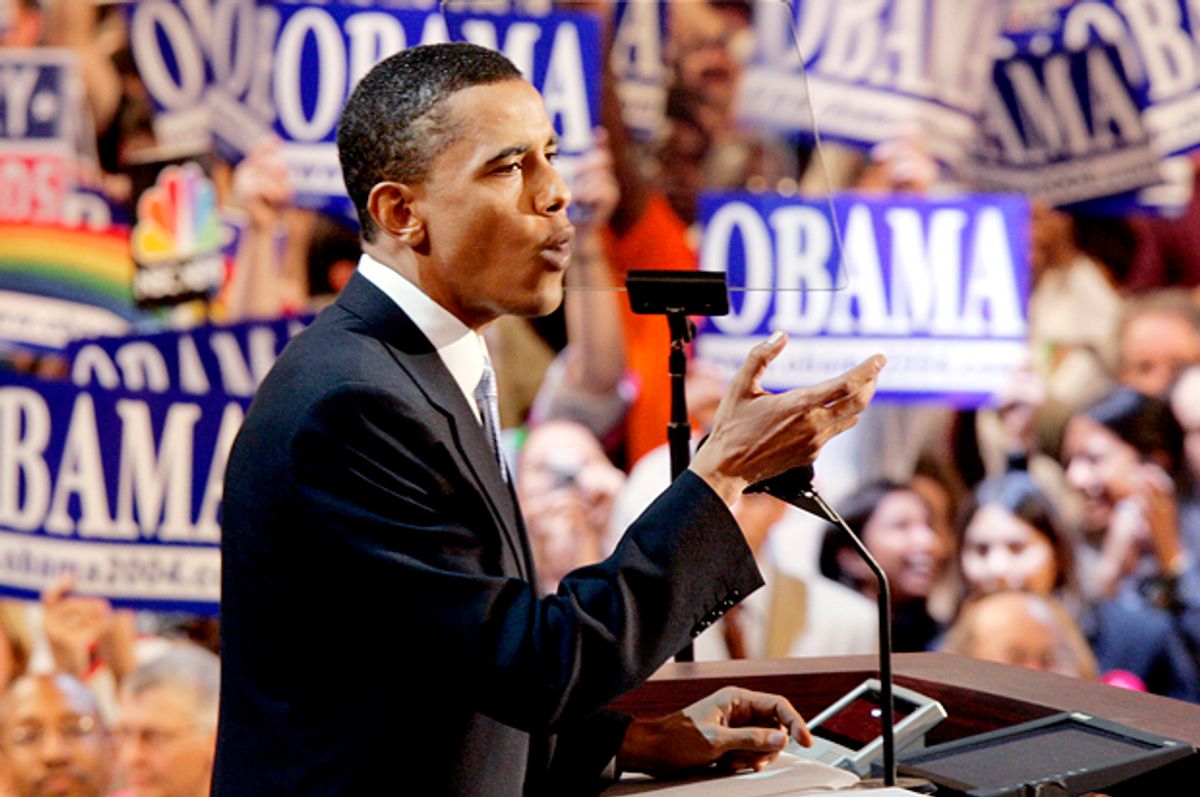 Barack Obama delivers the keynote speech during the second night of the Democratic National Convention in Boston, July 27, 2004. (Reuters/Kevin Lamarque)
--

Not since Jim Jones’ farewell address has there been as optimistic an orator as Donald Trump. To contrast the despotic doom and gloom of the Republican National Convention with the hope and optimism of the Democratic National Convention is to juxtapose the worldview of sane people with the hallucination of the insane. It also gives insight into the greatest cultural accomplishment of a president in the past 30 years. Equally significant to Ronald Reagan returning right-wing politics to the mainstream, Barack Obama has transformed patriotism. Through a continual and concerted redefinition process, the president has confiscated national pride from conservatives and turned it into the property of liberalism.

Many commentators reduce the Democratic Party’s patriotic tone and rhetoric to a defensive reaction against the awful slogan, “Make America Great Again.” While there is certainly an element of political rebuttal involved, reality is that Barack Obama began to flip the script on patriotism, and reinvent the requirements of a patriot, in 2004.

During the closely contested presidential race of that same year, President Bush and his acolytes had successfully equated love of country with their foreign policy and national security apparatus. Shortly after the attacks of September 11, ABC fired Bill Maher for criticizing US bombings of the Middle East. Ari Fleischer, Bush’s press secretary, answered a question about the Maher controversy with an ominous warning, “This is a time when people need to watch what they say.” Senator Max Cleland, who lost three limbs in the Vietnam War, lost a reelection campaign to a challenger who openly questioned his loyalty to America, and in the most surreal episode, hundreds of radio stations banned the Dixie Chicks from the airwaves after their lead singer denounced President Bush during a concert in London. Critics of Bush and opponents of the war in Iraq routinely faced accusations of “anti-Americanism.” In the immediate post-9/11 years, patriotism meant subservience to right wing government, thoughtless support for war, and dogmatic belief in acceptance of “American exceptionalism” – the tenet of cultural and moral superiority.

It was through this hideous panorama that Barack Obama emerged to brighten the landscape. In 2004, he gave the famous keynote address that would launch him to superstardom, and begin speculation overnight, that he would one day soon move into the White House. It was not only that Obama was telegenic and charismatic, but that his rhetoric soared in service to recapturing the American dream from the clutches of an oppressive nightmare.

Using his own eclectic background and biography as evidence, Obama forcefully argued that America’s greatness derives from its diversity. In a love letter to his country, similar to Walt Whitman’s "Leaves of Grass," Obama illustrates what E Pluribus Unum looks like in practice and politics. It sounds clichéd and mawkish, but in an amplification of the American promise, Obama’s most famous line declared, “There’s not a liberal America and a conservative America — there’s the United States of America. There’s not a black America and white America and Latino America and Asian America; there’s the United States of America.”

Obama rescued himself from the vaguely sentimental by anchoring his hope in his own life story, and the multicultural and multicolored character of the United States.

Walt Whitman wrote that America was a new nation in need of new poets. "Leaves of Grass" was not only a masterful poem, but also his nomination of a “new Bible” for the unique and unprecedented citizen of a unique and unprecedented nation. America, like the poet himself, contradicts itself, and contains multitudes. Whitman writes that he “speaks the password primeval” and gives the “sign of democracy,” both of which include the voices of slaves, prostitutes, the diseased and the despairing, and of thieves and dwarves. He feels at home in the fleet of iceboats, on the hills of Vermont, in woods of Maine, and on a Texan ranch.

Obama infused Whitman’s poetry into political communication. In the "Audacity of Hope" he blends biography and sociology to provide an anatomy of inspiration for his speech.

“In a sense, I have no choice but to believe in this vision of America. As a child of a black man and white woman, someone who was born in the racial melting pot of Hawaii, with a sister who’s half Indonesian but who’s usually mistaken for Mexican or Puerto Rican, and a brother-in-law and niece of Chinese descent, with some blood relatives who resemble Margaret Thatcher and others who could pass for Bernie Mac, so that family get-togethers over Christmas take on the appearance of a UN General Assembly meeting, I’ve never had the option of restricting my loyalties on the basis of race, or measuring my worth on the basis of tribe.”

The Obama vision of America as home of hospitality and opportunity for all inhabitants resonates with young Americans, and because he stayed true to it – always speaking in hope throughout his two terms – it is now part of the Democratic platform and mentality. The Democrats are not reacting to Donald Trump. Republicans, with the nomination and elevation of Trump, are reacting to Barack Obama.

Republican politicians and pundits would have shown wisdom if they leaned libertarian, and made the argument that their economic policies of low taxes and light regulations assist and empower the mixed-race gay couple that has adopted a baby from China. Instead they have tried to land a counterpunch in the face of Democratic patriotism. Barack Obama reoriented patriotism toward diversity. So, Republicans have made it about exclusion. Obama makes acceptance of immigration and multiculturalism central to the American character. Trump proposes the deportation of undocumented Latinos, and a prohibition on Muslim entry into the United States.

Whether or not the Republicans win in November, by rejecting the Obama vision of America that is most popular with Americans under the age of 45, they are signing their long-term death warrant. The rapid diversification of America all but guarantees that exclusion and discrimination, on the national level, will soon become political poison.

Historians and analysts can debate if Obama’s policies aligned with his rhetoric, but it is impossible to deny his cultural achievement. He made belief and pride in America the result of freedom expansion and opportunity enlargement. Inclusion is now essential to the American identity.

The Republican Convention flew more flags than the Democratic Convention, but its speakers and audience members demonstrated contempt for everything that America has become. Their hatred for 21st-century America is precisely why they want to make America great again.

President Obama has transformed patriotism into the idea that America is continually in the process of becoming great as long as it is continuing to grant more liberties and protections to more people, and as long as it continues to make a greater variety of people, regardless of ethnicity or sexuality, feel welcome.

The political and philosophical brilliance of Obama’s maneuver is that it allows for the limitless growth of patriotism. More and more people can integrate themselves into it, while the right wing vision will contract or, at best, stagnate.

One of Whitman’s most famous poems is called “I Hear America Singing.” The song, full of different accents and dialects, is torture to Republicans, but music to liberal ears.