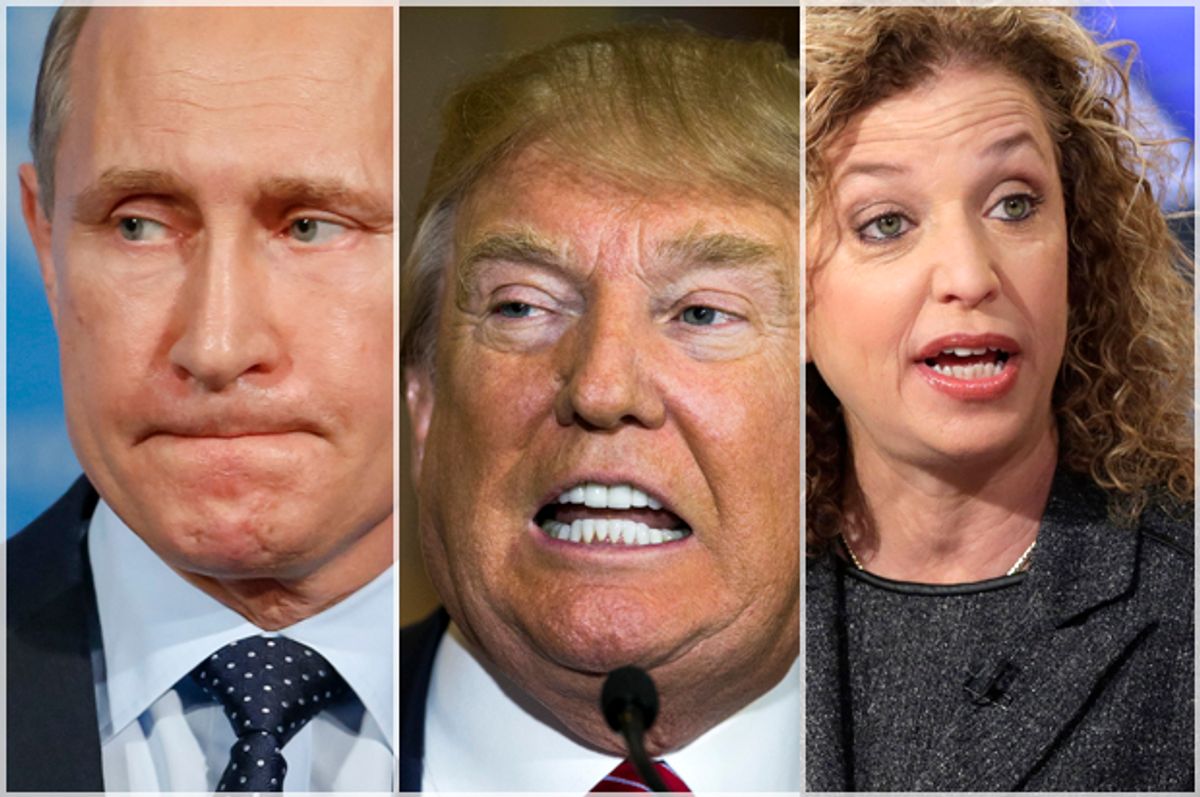 The shame of it is that "Watergate" is such an overused metaphor in political conversations. Everything, it seems, is just like the 1972 break-in and attempted bugging by Richard Nixon's "plumbers" at the Democratic National Committee headquarters inside the Watergate Hotel. The problem, therefore, is that any news stories that are absolutely similar to Watergate, or worse, will be laughed off as yet another wacky conspiracy theory.

The so-called DNC Email Leak is that story. It's Watergate multiplied by a factor of a thousand —  it's Watergate, but the "plumbers" are composed of Vladimir Putin, his Russian intelligence services and aided by the useful idiots at Wikileaks; the Nixon-style beneficiaries are Donald Trump and the GOP; and the victim is, once again, the DNC. Only this time, the burglars got away with it and the information gathered in this case was dumped into public view last Friday, mysteriously enough on the day after Trump delivered one of the most tyrannical speeches in American presidential history, turning the DNC email revelations into a de-facto fifth day of Republican National Convention festivities. Oh, and instead of Nixon resigning, the chair of the DNC was forced to resign. That's how twisted this is, and I can see how it might seem unbelievable. It's not.

Yes, I get it. Some of the content contained in a handful of the emails (out of a 19,000 email tranche) was fishy in terms of DNC officials expressing dissatisfaction with Bernie Sanders and his campaign. (Bernie's religious beliefs should never have been discussed, for example.) We'll circle back to the veracity of the emails momentarily. However, what we know so far greatly outpaces anything damning about the DNC officials themselves. What we know, and what's rapidly developing by the day, is that it's becoming increasingly obvious that Putin's intelligence apparatus broke into the DNC's network, stole the emails, set up a front account, and handed over the emails to Julian Assange's Wikileaks organization via that account. We also know that Putin and various Russian oligarchs have been giving money to Donald Trump. And we know that Trump's foreign policy closely aligns with Putin's, especially when it comes to the Baltics and NATO, which Trump has repeatedly stated will be allowed to fall to Russian aggression on Trump's watch.

As of this writing, further details along with the chain-of-evidence is still being established by journalists, security experts and the FBI. (By the way, before anyone kneejerks to the "crazy conspiracy theory" conclusion, it's worth noting that everyone from the former U.S. ambassador to Russia, to A-list reporter Richard Engel, along with The Daily Beast, ABC News, NBC News, Yahoo! News, Slate, TPM, Vice and The Washington Post have been uncovering new and frightening aspects of this story going back to June and culminating with the past 48 hours.) According to investigative journalists at Vice's "Motherboard," in particular, a security firm hired by the DNC discovered the existence of "two sophisticated adversaries" that had infiltrated the Democratic Party's internal email network. Known as "APT 28" and "APT 29," the handles are used by both the Russian intelligence service, the FSB (formerly the KGB) and the Russian military intelligence agency, the GRU. Later, using a front handle known as the aforementioned "Guccifer 2.0," the agencies announced back in June that it had given Wikileaks "thousands of files and mails."

Regarding the content of some of the emails, bear this in mind: according to conservative author and former NSA analyst, John Schindler, who, by the way, is no fan of Hillary Clinton, part of the FSB's tradecraft is to fabricate intelligence and toss it into a cocktail of legitimate documents. In other words, it's fair to speculate, based on Russia's modus operandi, that the questionable emails were doctored, if not manufactured for impact, while exculpatory emails might've been scrubbed from the tranche. We have to question everything here, given the tenacity of Putin's propaganda efforts.

The upshot is that the Russian government is trying to manipulate if not outright steal the election in support of Putin's anointed fanboy, Donald Trump.

Since the 1980s, Trump and his family members have made numerous trips to Moscow in search of business opportunities, and they have relied on Russian investors to buy their properties around the world.

“Russians make up a pretty disproportionate cross-section of a lot of our assets,” Trump’s son, Donald Jr., told a real estate conference in 2008, according to an account posted on the website of eTurboNews, a trade publication. “We see a lot of money pouring in from Russia.”

Then there's Paul Manafort, Trump's nominal 'campaign chair' who now functions as campaign manager and top advisor. Manafort spent most of the last decade as top campaign and communications advisor for Viktor Yanukovych, the pro-Russian Ukrainian Prime Minister and then President whose ouster in 2014 led to the on-going crisis and proxy war in Ukraine. Yanukovych was and remains a close Putin ally. Manafort is running Trump's campaign.

It should be obvious to anyone who's following this emerging story is that it's a disqualifying series of events for Trump and his cronies. Though while it won't end Trump's campaign, it represents perhaps the story of the year, so far, as well as the biggest political bombshell in recent memory, certainly more potentially devastating than Watergate, given the vast similarities. The only way to be sure the culprits are thwarted is to make sure Trump is not just defeated in November but utterly humiliated by the final vote count. More importantly, it'd signal to Putin and his allies that the American people will not allow him to monkey with our democracy in the same way he's monkeyed with his own.

One last thing: if you're only looking at this story as an internal DNC scandal, you're missing the despotic forest for the trees. We can't emphasize enough: this story is bigger than Bernie or Hillary. It's bigger than Trump. It speaks directly to the sovereignty of our electoral process. The sooner it's treated this way, the better off we'll be.