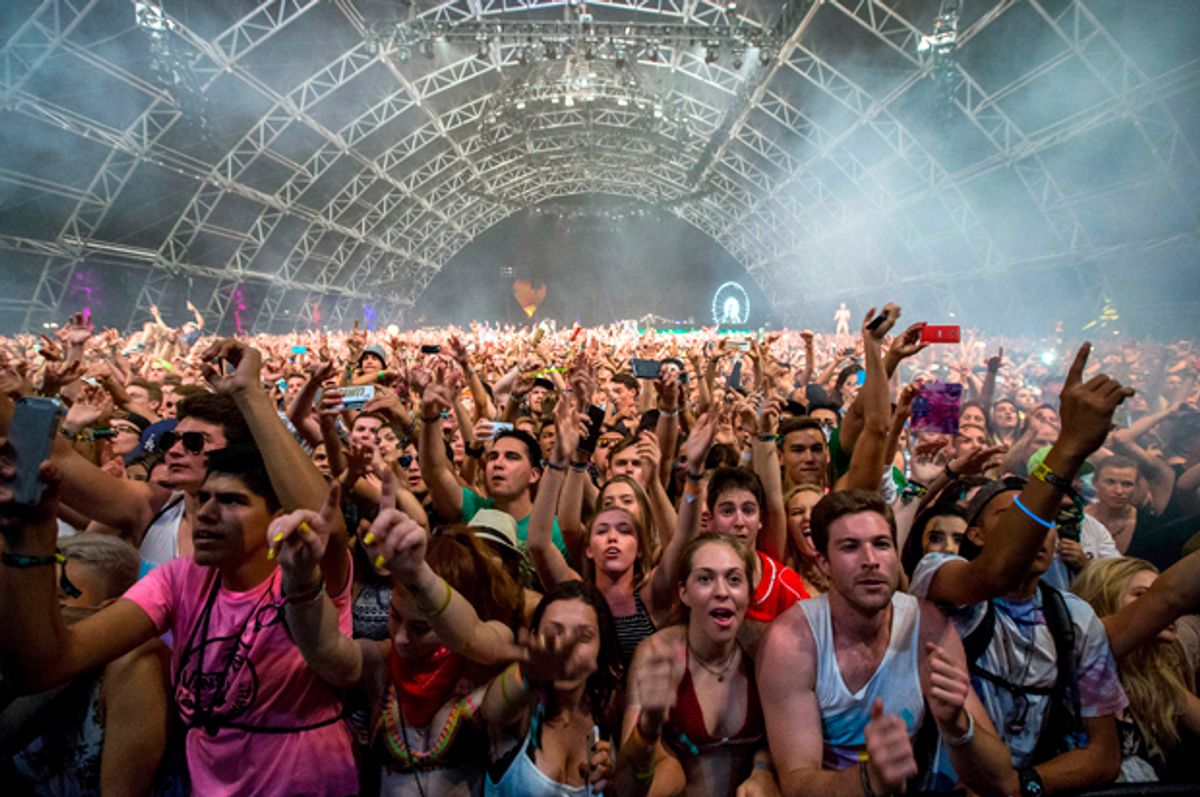 This weekend in Chicago, Lollapalooza is celebrating 25 years in existence with a bang: four days of music headlined by acts such as Radiohead, Red Hot Chili Peppers, J. Cole, Lana Del Rey, LCD Soundsystem, Future and Major Lazer. If you don't already have tickets, however, you're mostly out of luck: Four-day and individual day passes to the festival are sold out, and only VIP passes remain available. Back in April, festival staple Coachella, which takes place over two weekends, enjoyed similar success with a reunited Guns n' Roses, among others. In a Billboard story on mid-year tours, AEG Live CEO Jay Marciano characterized that fest as having a record year—impressive, since in 2015, Coachella grossed $84 million and drew nearly 200,000 people. Niche festivals have also enjoyed success: Coachella's classic rock-leaning Desert Trip sold out two weekends in mere hours, while the hard rock and metal extravaganza Rock On The Range sold out months in advance—as did the 2016 CMA Music Festival, which set attendance records in its 45th year.

Still, the 2016 outlook hasn't been as rosy for other festivals. Bonnaroo experienced a significant attendance drop this year, according to a report by The Tennessean: The camping-friendly event sold 45,537 tickets—28,156 fewer than 2015—which amounts to a 46 percent drop from the fest's best-selling 2011 year. The Sasquatch! music festival over Memorial Day weekend drew only 11,000 ticket-holders, according to the Oregonian, which quoted the Grant County Sheriff's Office as saying "that's about 50% of what normally attends."

Other festivals faced similar woes: Levitation Festival in Austin was canceled the day before it started due to "safety concerns regarding dangerous weather"—after many out-of-town attendees had arrived already—while the Sunday of New York City's Governors Ball was also scotched due to weather. All Tomorrow's Parties nixed a weekend festival in Manchester, England, in the wake of financial uncertainties and "months of chaos," while the Colombia edition of Lollapalooza didn't happen due to a headliner dropping out. Just this week, the country-leaning Buckle Up Festival in Cincinnati was canceled due to what it termed "circumstances beyond our control."

Of course, severe weather is also something out of everyone's control. However, there are no easy answers or clear-cut reasons for the underperforming festivals, since the formula for festival success remains complex and elusive. For example, in Sasquatch!'s case, the Oregonian surmised that perhaps lineup challenges—including a lack of a strong hip-hop act—or even a "weak Canadian dollar" were contributing causes. There's something to that: Although certain acts strictly play festivals during the summer, others treat appearances as part of a tour—meaning it's not necessarily special or unique to see a band there. (Acts even play shorter sets at festivals, a minus for fans.) Although it can be argued that a festival is about the overall experience, not just the music, having strong, unique entertainment is one way to ensure someone buys a ticket.

In fact, the Oregonian noted that Sasquatch! was missing a reunited LCD Soundsystem, one of the bigger draws making the festival rounds in 2016. Still, even the carrot of a reunited band isn't quite as tantalizing as it once was. Coachella arguably kicked off the trend of high-profile reunions: Pixies, Jesus and Mary Chain, My Bloody Valentine and the Stooges have all played gigs there. However, there's less of an incentive to see a long-time favorite act live and in person—especially since a broken-up group getting back together for a gig (or a tour) is expected, not a surprise, and chances are the show will be live-streamed (or posted to YouTube soon after).

But on some level, these festival stumbles could be corrective. Back in 2014, Wondering Sound published a piece called "Why The Summer Music Festival Bubble is About To Burst" that examined the burgeoning (and crowded) festival scene. Not only did a booking agent then note there were a staggering 847 North American festivals happening that year—pointing not just to saturation but also festival fatigue—but Pollstar founder Gary Bongiovanni pointed out how much worldwide competition that's created. "Everyone is pulling from the same talent,” he said. “And that is the problem: Everyone is chasing the same pool of talent, not just in the United States but globally. If they’re playing Yugoslavia, they’re not available in Arizona."

In addition, price can be a factor. This year, Bonnaroo's general admission tickets cost $324 and VIP tickets were nearly $1,600 for a pair. "I have had students pass on some festivals, telling me that they can go to Florida and see their favorite act in a one to two-day event, stay at a cheap hotel on the beach, drive back and spend less than most VIP packages," Belmont University music industry professor David Herrera told The Tennessean. Plus, national destination festivals now have plenty of competition from local ones—why should music fans travel and spend thousands of dollars when there's something closer and cheaper offering a similar experience?

“There will eventually be too many festivals for any given market to sustain, because there aren’t that many people with that much disposable income," agent Andrew Morgan told Wondering Sound. "There are only so many $300 festivals that people can go to, if any at all. That might be the thing that eventually breaks the camel’s back — not too many festivals, but too many festivals that are too expensive for a demographic. As soon as it starts happening, it sours ticket buyers, and it sours artists. That’s it." Still, even that's not a sure bet. Billboard reports that pricier tickets flew out the door for Desert Trip: "In fact, the least expensive tickets -- $199 daily passes -- were the last to sell out, according to one insider."

At the heart of it all is that the novelty of a festival has worn off. Although fests have been a major part of the global concert experience for decades, the U.S. has finally caught up to the rest of the world. Festivals aren't ephemeral, but established—and with so many choices, people have to be pickier. Although certain fests can sell out before even announcing a lineup, it's a consumer market these days, making the equation for success that much murkier. For example, it's not like Bonnaroo had an awful lineup this year: Headliners were Pearl Jam, LCD Soundsystem and Dead & Company, while popular touring acts Halsey, the Chainsmokers, Chris Stapleton and Tyler the Creator appeared, as did a reunited Ween. This year, the fest also added flushable toilets and permanent showers, along with a permanent water line, to enhance the experience.

So what can festivals do going forward to stand out? Reward loyal attendees, for starters. Payment plans are popular now—and a smart move—but until recent years, Lollapalooza had a "golden ticket" promotion, wherein people on their mailing list could snap up a limited number of super-cheap tickets. Acknowledge attendees who have supported a festival, and give them incentives (or discounts) to come back. Festivals should also angle to amplify the unique angles or enticements they offer—and then create urgency around these offerings, by unleashing FOMO (a.k.a. fear of missing out). The one-time-only vibe of Desert Trip meant the festival practically marketed (and sold) itself. Doubling down on strengths is another smart move. That's why niche festivals tend to do well, because they know their audience—and what their audience likes. Instead of trying to be everything to everyone, cater to the core. It might not be as adventurous, but at least it'll be safer.

If all else fails, a fest can scale back or take a year off. That's perhaps the most drastic (and dangerous) move, since this exudes the perception of failure, and is a detriment to momentum. There's no guarantee a festival can recover from going away. Still, recalibration and rejuvenation might be the smartest move for the long-term success of certain festivals—after all, this type of concert-going experience is clearly here to stay.