History will long remember her DNC address, but the substance and style of FLOTUS' speech was 8 years in the making 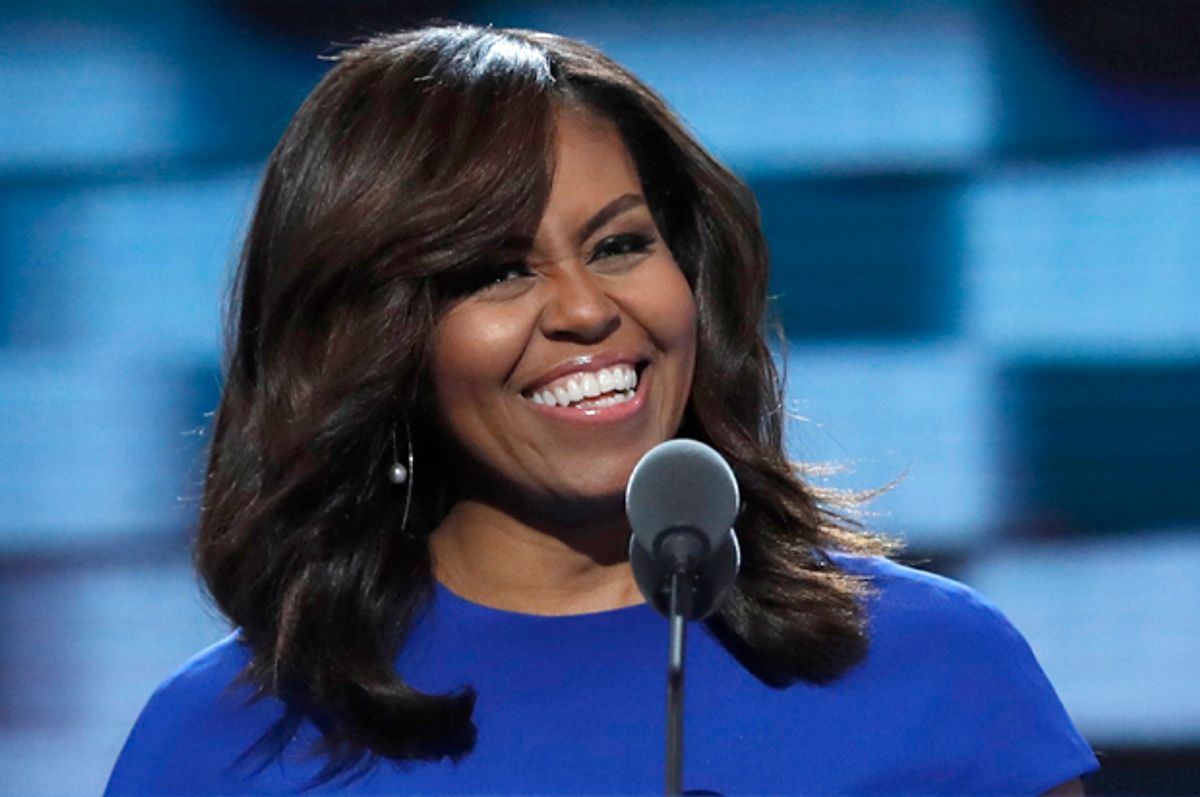 If a speech can be measured by Trump's standard —how much attention it receives — Michelle Obama's address at the Democratic National Convention was not just a home run but a grand slam. The speech has already received a great deal of coverage, most of it highly positive, and some highly confused. Fox News pundit Bill O'Reilly, for example, made some (to borrow from the pundit's phraseology) boneheaded comments on his show Tuesday night. Affecting the air, though not the scholarship, of a professor of history, O'Reilly conceded the accuracy of Obama's remark “I wake up every morning in a house that was built by slaves.”

Then O'Reilly somehow felt the need to try to mitigate the line's emotional effect by noting that the slaves “were well-fed and had decent lodging,” a claim, ironically, of questionable historical accuracy.

The passage in Obama's speech is itself destined for the history books. “That is the story of this country, the story that has brought me to this stage tonight, the story of generations of people who felt the lash of bondage, the shame of servitude, the sting of segregation, but who kept on striving and hoping and doing what needed to be done so that today, I wake up every morning in a house that was built by slaves,  and I watch my daughters — two beautiful, intelligent, black young women — playing with their dogs on the White House lawn,” Obama had declared the night before.

The remarks were noteworthy for reasons other than its provocation of idiotic and inhumane coverage from the right-wing media. In highlighting the ever-evolving nature of America itself, Obama's speech was the third phase in a personal evolution, at least as expressed via her convention addresses at the last three DNCs.

While Melania Trump's brazen plagiarism of Michelle Obama's 2008 speech came as quite a shock, the fact that she chose to crib from Obama's first DNC address, and not her second, was far less surprising. Amongst the stolen lines were the soon-to-be first couples hopes for their daughters. “We want our children — and all children in this nation — to know that the only limit to the height of your achievements is the reach of your dreams and your willingness to work for them,” she said. The message was deeply conservative, suggesting that individual agency was the solely responsible for determining one's lot in life. The lines were, of course, contextualized in a discussion about racial discrimination and progress, and the devastating effects of poverty. But Obama's vivid description of her and her husband's working class backgrounds didn't emphasize the external limitations imposed on their parents' success. It emphasized the extent to which they had each taken control of, and shaped, their own destinies. To do so was a personal quality; it was what attracted Michelle to Barack.

This narrative underwent a subtle transformation in 2012. Perhaps because, after four years in the White House, Obama was more legitimately able to stake her claim as a political figure in her own right, and perhaps in response to the growing influence of the Tea Party's economic extremism, her message was new. In highlighting her father's background, Obama stressed that his dreams were for his children, not himself, an implicit recognition that structural impediments often prevent americans from achieving their full potential. “[Our families] believed in that fundamental American promise that, even if you don't start out with much, if you work hard and do what you're supposed to do, then you should be able to build a decent life for yourself and an even better life for your kids and grandkids,” she said. America's promise was not that you could have a great life, but a decent one. It was not that you could attain whatever you aspired to, but that your children would aspire to more. And it merged the work of parenting with that promise of America: to do better by our children. Again, the speech contained the implicit recognition that we aren't doing well enough.

Obama's convention remarks this week week went slightly further. In discussing parenthood and its relation to the American dream, Obama stressed the inherently political nature of being a black mother to the black children of the first black President. And, in doing so, she drew attention to the racism she and her family have had to cope with, and the influence of that hate on her family life. “[A]s we try to guide and protect our girls through the challenges of this unusual life in the spotlight...we urge them to ignore those who question their father's citizenship or faith,” Obama said. The line also effectively took racist rhetoric out of the realm of ordinary political disagreements, and accurately described it as something deeply personal. Far less prominent parents all over America are, at this moment, having similar conversations with their fearful children about the best way to respond to a culture of hate, one being stoked by the DNC's political opponents.

In talking about the changing nature of opportunity, Obama also took a more actively nuanced approach than we've seen from her before. She countered the propagandistic notion of extreme individualism as paramount, a notion she had, eight years ago, furthered. Instead, she acknowledged, much to the chagrin of conservative commentators, that many of the hardest workers in American history were, by deeply discriminatory and unjust laws, barred from partaking in its dream. She did not do so to disparage or criticize America, though she would have been entirely entitled. Instead, she described the ever-growing nature of American opportunity as a testament to American progress, not just on a familial level — the dreams people have for their children — but on a societal one: the dreams people have for the nation in which their children will live.

But the truly masterful stroke came in coopting the right's rhetoric on “work.” Propaganda about limitless opportunity for all Americans is not just damaging for its suggestion that government aid and services are unnecessary in a nation where hard work and vision are all that stand between poverty and great wealth. It is also damaging for its suggestion that social justice is a silly distraction. It's easy to shrug off taunts when they don't have an impact on one's material conditions. It's far harder to do so when they are merely symptoms of widespread systemic problems that prevent equal access to the promise of America, when one's identity in these realms poses a threat to your physical safety and autonomy, to your education and work and housing prospects, to the reach of your dreams.

The right's suggestion, too often, is that people of color should stop whining about white privilege, and instead focus on bettering there own lives via the redemptive power of hard work. In other words, the issues of the so-called culture wars should be secondary to supposedly more pressing economic concerns, which helps justify supporting an overtly racist candidate because he's more likely to help pass your budget. Obama had equal faith in work's redemptive power, but expanded its scope to include those who are fighting those culture wars, who have dedicated their lives to breaking down barriers for entire categories of people, rather than simply surmounting those barriers themselves. Because, in her words, “we are always stronger together.”