It's well past time to stop laughing: Trump's Russian hacking comments make clear that he poses an existential threat to our democracy

Trump is receiving classified national security briefings, but just gave us reason to doubt his loyalty to the U.S. 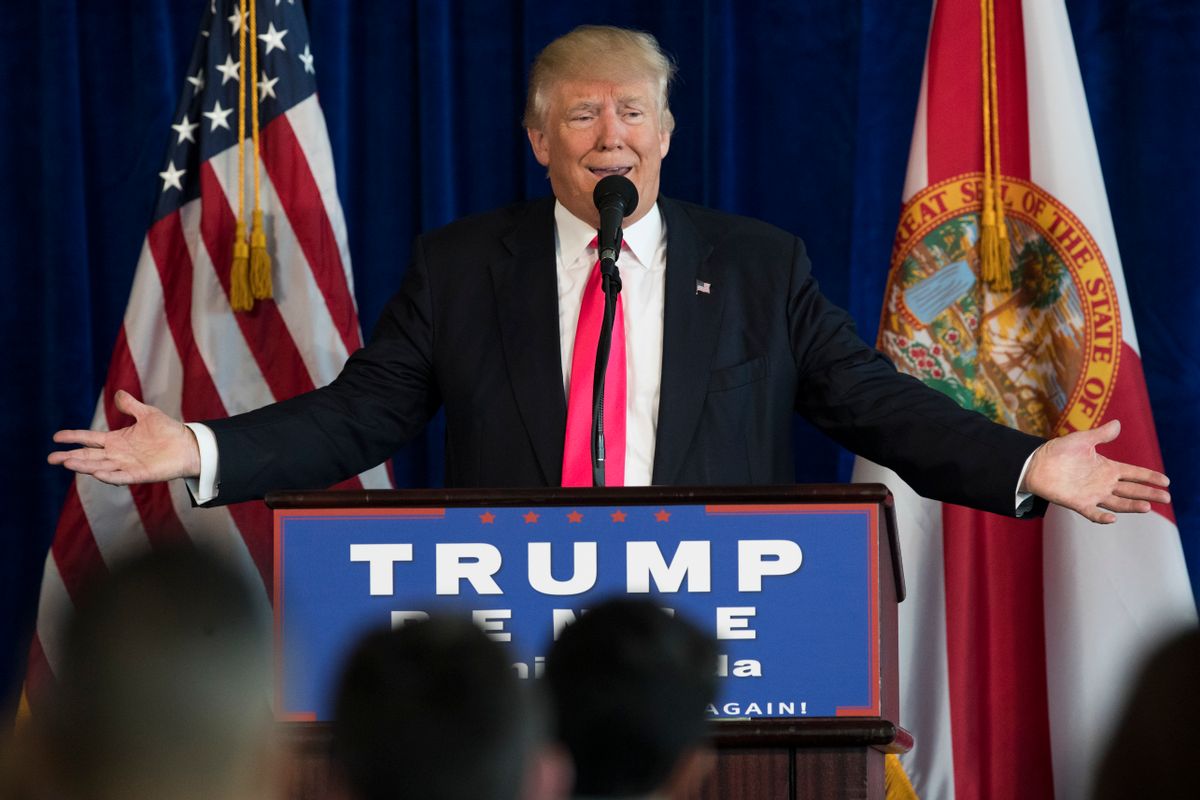 Imagine for a moment if Hillary Clinton told reporters that she hopes the Russian government hacked Donald Trump's internal network, acquiring copies of his tax returns and releasing them to the public specifically to swing the presidential election in her favor. Or worse, imagine if Hillary Clinton hoped if not greenlighted any government to have conducted cyber-espionage against any of her political enemies.

During a midday news conference on Wednesday, Donald Trump was asked about growing linkage between himself, Vladimir Putin and the tranche of leaked DNC emails mysteriously released by Wikileaks late last week. In response, the Republican nominee for president said, "Russia, if you’re listening, I hope you’re able to find the 30,000 emails that are missing." He continued, "I think you will probably be rewarded mightily by our press."

Making matters worse, Trump retreated to his Twitter account and posted this: "If Russia or any other country or person has Hillary Clinton's 33,000 illegally deleted emails, perhaps they should share them with the FBI!"

At the very worst, this was a treasonous act. This sentence, "I hope you’re able to find the 30,000 emails that are missing," directly suggests that Russia should actively attack an American cyber target. At the very minimum, Trump explicitly hoped for the Putin regime to have infiltrated Hillary's home-brew server, along with U.S. State Department communiques, in order to politically benefit his campaign. At any point along this spectrum of guilt, Trump has to be regarded as completely reckless and terrifyingly irresponsible. Again, no candidate for public office, especially one with a 50/50 chance at becoming the next commander-in-chief, should be speaking this way and, in fact, if Trump was merely joking as his cheerleaders on Fox News were suggesting, it makes his statements even more irresponsible. And if he was joking, should a serious contender for the presidency be joking (badly) about allowing Russian cyber-attacks to occur in the name of helping him win? Not a chance in hell.

Furthermore, 1) cyber-espionage against the State Department isn't zinger material, and 2) I don't think he was joking.

Bear in mind, too, that Trump is officially receiving classified national security briefings since securing the nomination. (Intelligence officers are reportedly concerned about this, even before Wednesday's statements.) A candidate who routinely and without any personal discipline spends his nights blurting trollish comments on Twitter, while apparently spending his days wishing for his fanboy Putin to have spied on the former Secretary of State, thus aiding Trump's campaign amid allegations that Putin already nabbed 20,000 DNC emails in order to accomplish the same goal, is being entrusted with our national security secrets. This, in a word, is unprecedented. Voters, meanwhile, who happen to be leaning toward making a colossal blunder by checking their ballots for Trump seem to believe this ill-informed, ill-tempered dilettante — this Clown Dictator with zero personal restraint should enjoy access to our national security secrets, not to mention the codes to deploy our nuclear triad (a term, by the way, he didn't understand until recently).

It's no wonder that, throughout the day, observers on both sides of aisle resoundingly condemned Trump's behavior. And thank goodness for it.

And, though not addressing the specific remarks, Speaker Paul Ryan's spokesman said:

Paul Ryan's statement is telling. It's telling because the Republican Speaker of the House thinks there's at least a chance that Putin is intervening in the U.S. presidential election on behalf of Trump, obviously. This is beyond breathtaking.

Dovetailed with mounting evidence showing Putin's intelligence services, the FSB and the GRU, stole thousands of DNC emails and leaked them to the public via their useful idiots at Wikileaks, we have no choice but to begin asking the Watergate question: What does Trump know and when did he know it? Does Trump have specific information about the process and timing of the DNC email leak? Are Trump's tax returns festooned with evidence of massive loans from Russian oligarchs close to Putin, as George Will suggested this week? We shouldn't expect any answers, and it's unlikely Trump will face any legal sanctions. But, at the very least, this ought to crush Trump's chances at winning the election. Of course, his angry white male supporters won't let go of their precious Clown Dictator, but perhaps enough swing-voters will finally see Trump for what he truly is: a despot in waiting.