We're not even at Peak Drake yet: This is what celebrity looks like in an era where we want more for less

Drake became the most overexposed man in music this year, reaching a saturation point reminiscent of early Beatles 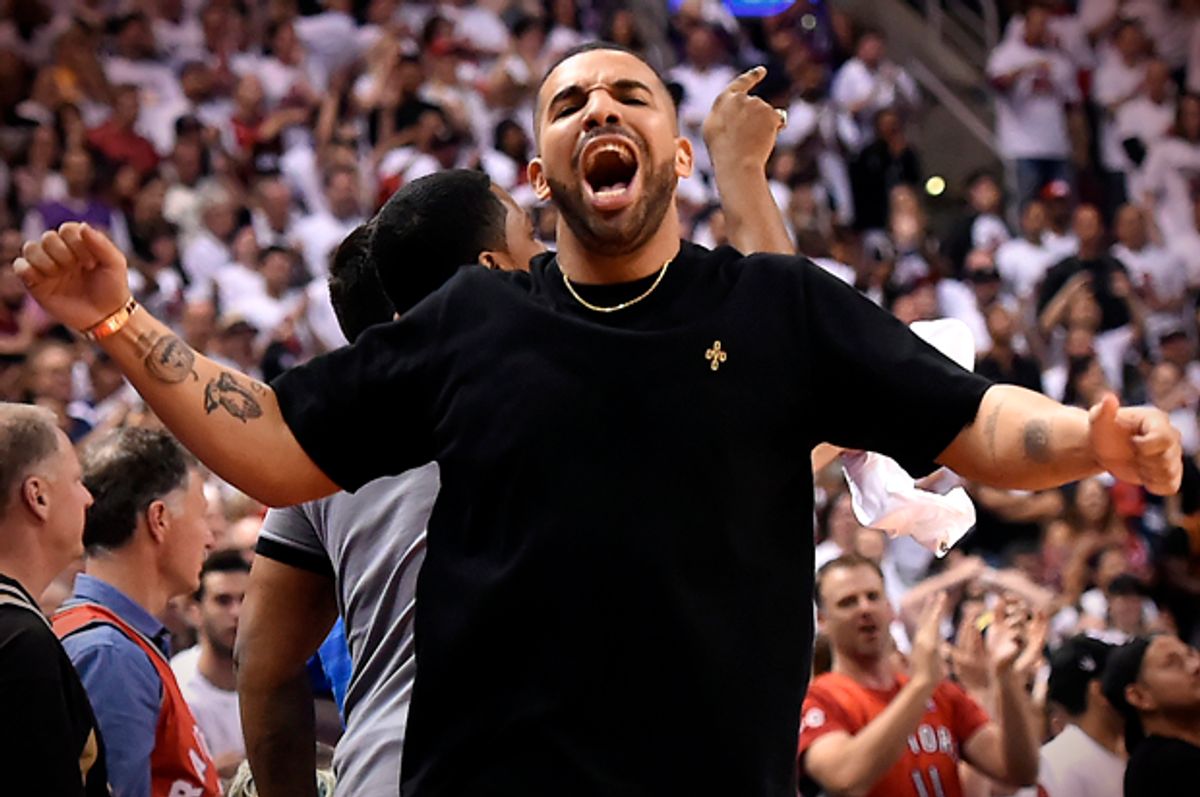 For being the saddest man in rap music, Drake sure does have a lot to celebrate.

The rapper (née Aubrey Graham) celebrates a mammoth 11th week atop the Billboard for “Views,” his fourth proper studio album. That’s the longest such run by a male artist in 24 years, since Billy Ray Cyrus’ “Some Gave All” back in 1994. (You might remember it as the record that launched “Achy Breaky Heart,” the syrupy country ballad America still can’t wipe from its brains.) Graham has additionally spent 22 weeks atop the Hot 100, despite the fact that we’re only 30 weeks into the year. First, there was “Work” (9 weeks), the lead single off Rihanna’s “ANTI,” and then “One Dance” (10 weeks), which was recently dethroned by Sia’s first chart-topper “Cheap Thrills.”

Drake’s success is unprecedented: He’s one of the few artists to have both the number-one album and the number-one song for 10 weeks, as well as holding the record for the most tracks to chart on the Hot 100. In May, he shattered the previous benchmark, held by Justin Bieber of all people, with 20 songs on Billboard at the same time.

In the streaming age, that kind of chart ubiquity often signifies that an artist just dropped an album, like when all of the tracks from Beyoncé’s “Lemonade” appeared on the Hot 100 the week following its surprise release. What’s unusual is that nearly three months after “Views” dropped, 10 Drake tunes are still charting—which include “Controlla” (no. 18), “Too Good” (no. 20), “Pop Style” (no. 72), and “Child’s Play” (no 92). He also enters the Hot 100 as a guest on DJ Khaled’s “For Free” (no. 19), the aforementioned “Work” (no. 23), and French Montana’s “No Shopping,” among others.

Such domination is both an incredible achievement and utterly exhausting. The artist who originally came to fame playing a wheelchair-bound middle-schooler on TV’s “Degrassi” has promised to drop another mixtape this summer. This will be his fourth release in just two years, following two successful EPs released in 2015: “If You’re Reading This It’s Too Late” and “What a Time to Be Alive,” the latter a collaboration with the rapper Future. To release any more songs at this point is more of a threat than a promise.

Drake’s current output is dramatically redefining the limits of overexposure in an era where we demand increasing amounts of content from celebrities. To be a musician of Drake’s caliber is not merely a matter of working on material, polishing it in the studio, and putting it out once every few years. It entails a steady flow of viral bait that amounts to a PR onslaught—appearing on “Saturday Night Live,” going through the motions of your own celebrity feud, and maybe even becoming a meme or two (see: “Drake-ing Bad,” which is precisely whatever you think it is). Drake, perhaps more than any celebrity of his era, understands the economics of fame in an age where we want more from celebrities for less.

That savvy has served him well in the past. “Hotline Bling,” the lead single off “Views,” features a video that was designed to be endlessly GIFed. Helmed by the ridiculously named Director X (he’s big in Canada), the five-minute segment features Drake, wearing an owl sweatshirt, slow-jamming against a series of monochromatic backgrounds. The mise en scène is like a cotton-candy “Tron: Legacy” filtered through his emo musings on female autonomy. That video has been viewed nearly a billion times.

The massive commercial and critical success of “Hotline Bling,” tapped as the winner of the prestigious Pazz and Jop poll in 2015, announced the dawn of Drakemania. Drake, of course, had always been successful. His first-ever track on the charts, the comic and playful “Best I Ever Had,” reached no. 2, while its parent LP also peaked at the sophomore slot on the album charts. But while announcing a new peak in his creative gifts, 2015 also defined his release strategy: When the surprise release “If You’re Reading This It’s Too Late” dropped on Billboard, every single track charted. During the record’s first week in stores (or wherever people buy albums these days), Drake may as well have owned the music industry.

The first act to flirt with that kind of success was The Beatles, the U.K. rock-and-roll group that made a nation threaten to lock up its teenage girls when the “British Invasion” came to America in 1964. On April 4, the Paul McCartney-fronted band boasted the top 5 songs on the Billboard Hot 100: “Can’t Buy Me Love,” “Twist and Shout,” “She Loves You,” “I Want to Hold Your Hand,” and “Please Please Me.” To capitalize on that success, The Beatles released nine LPs and EPs that year, unfathomable today.

In a biography of Frank Sinatra, Spencer Leigh notes that The Beatles’ releasing strategy broke every rule of how pop acts are usually promoted. “No record company wants to promote more than four or five singles by the same act in a year,” Leigh writes in “An Extraordinary Life.” “What took place was saturation marketing gone bezerk and any promotion man would fear that the public had been turned off by the over-exposure.” Although the group is revered today, that’s precisely what began to happen. In announcing The Beatles’ record-breaking chart success, Billboard moaned, “Just about everyone is tired of the Beatles.”

At their peak powers, many artists have pumped out a massive volume of content. Between 1979 and 1985, The Cure released a new album nearly every year. Guided by Voices put out nine records in the ‘90s and hasn’t slowed down since. The Ohio-based group, which consists of Robert Pollard and whoever can stand to be around him at the time, debuted six albums between 2012 and 2014. Another just hit stores this April. Until recently, Rihanna followed the same strategy. Starting with 2005’s “Music of the Sun,” the Barbados-born singer churned out seven albums in seven years, which included “Loud,” “Rated R,” “Unapologetic,” and “Good Girl Gone Bad.”

Quantity doesn’t always mean sacrificing quality—until it does. Although The Cure released “Pornography,” the band’s darkest effort, during its prolific period in the early ‘80s, Rihanna’s actual albums have often felt perfunctory, a kind of necessary evil. Rihanna has spent more weeks atop the Billboard Hot 100 than any artist not named Mariah Carey, but until 2012, she’d never had a chart-topping record.

The four-year break Rihanna took making “ANTI” did a great deal to change that. The singer has often been viewed as more of a singles machine than an album artist — the kind of musician who can deliver an accomplished, fully fleshed-out production. “ANTI,” though, hints at a more thoughtful and reflective side of Rihanna, especially on tracks like the gospel-influenced “Higher,” which showed off the increasingly impressive vocal range she displayed on “FourFiveSeconds,” and the synth-rock ballad “Kiss It Better.” Rather than pushing through yet another record at any cost, the singer spent years tinkering with the production and tossing out songs that didn’t work. That dedication shows.

Drake’s recent work, in contrast, has been mired by a feeling of redundancy. There’s little on “Views,” his worst-reviewed album to date, that Graham didn’t express on either of the mixtapes he released last year—monotonous feelings of longing for an anonymous and unattainable girl, the shapely silhouettes he chases in “Hotline Bling.” As Slate’s Jack Hamilton points out, there were multiple tracks on “Nothing Was the Same,” considered by many to be his best album to date, devoted to the emotional etiquette of texting.

The artist’s relentless need to stay on top at the expense of his artistry isn’t just a matter of braggadocio, despite what he claims on “Forever.” (“Last name greatest, first name ever.”) It’s also a matter of economics. “The album as a format isn’t as important as it once was,” writes The Guardian’s Derrick Rossignol. “Music sales don’t bring in the kind of money that they used to, so they have effectively become another piece of merchandise, like a concert T-shirt or a tour poster. Bands don’t sell their music anymore: They sell themselves.” That’s why Beach House put out two albums in 2015 (“Depression Cherry” and “Thank Your Lucky Stars”), as did Death Grips and Mac DeMarco.

Rossignol is right: Services like Spotify and Apple Music have completely changed the model of how artists make money in an era driven by streaming platforms. When promoting “ANTI,” Rihanna even gave away a million free copies of the record as part of a licensing deal through Samsung. Unless you’re Adele, who markets to the one group who still manages to buy music the old-fashioned way (e.g., the elderly), you have to make your own rules—like Rihanna—or play a game someone else controls.

That’s perhaps why Drake isn’t just the voice behind every song on the radio. He’s absolutely everywhere. Graham has his own whiskey company. He starred in a Sprite commercial, in which he struggles to sing “Forever” before taking a sip of an ice-cold cola, thus finding his voice. Drake also has been at the center of campaigns for Nike Air Jordan and a T-Mobile commercial that aired during the Super Bowl. He even popped up in “Anchorman 2” and  “Ice Age: Continental Drift.” In the latter, he appears with two other musicians who were just there for the paycheck—Nicki Minaj and Jennifer Lopez. Most recently, Graham took time out of his schedule made to get in the middle of the Kanye West-Taylor Swift feud.