The next president will likely appoint 4 Supreme Court justices: Who do you want picking them? 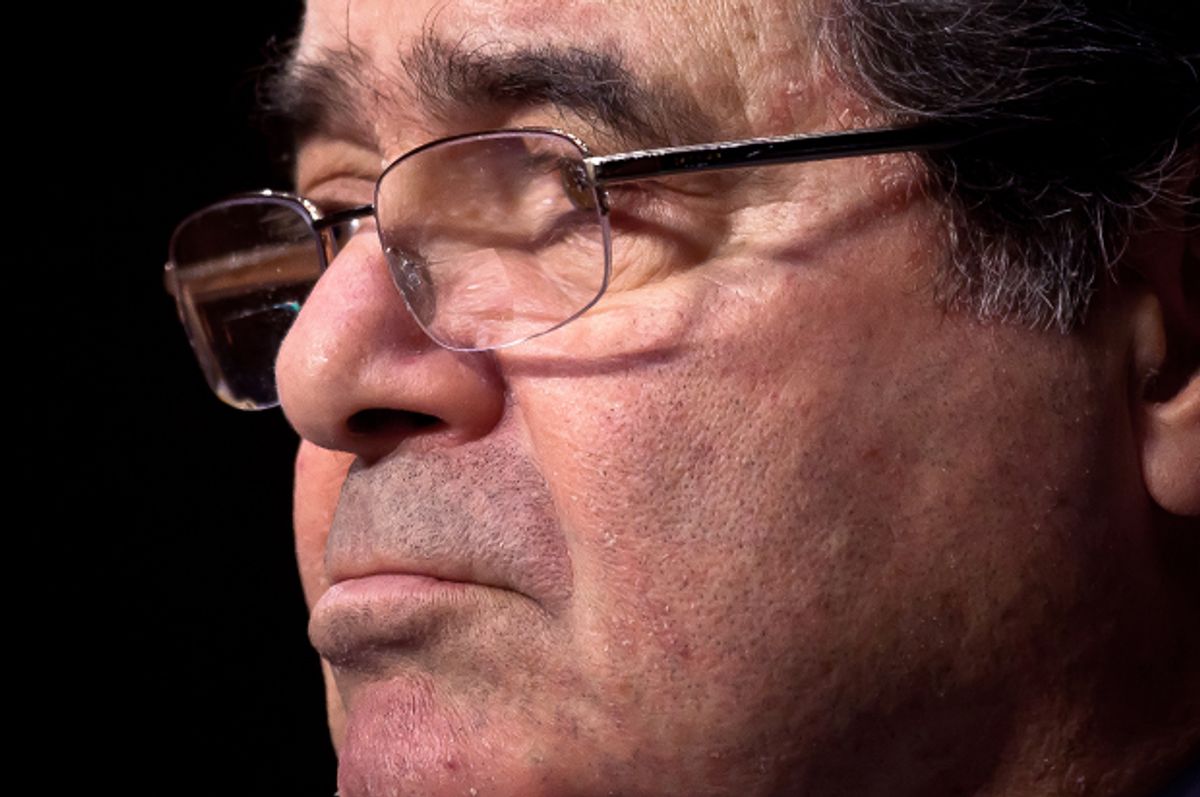 Many progressives disagree with Hillary Clinton on a number of issues, in some cases intensely. But there is one overarching reason we should be vigorously supporting her election: The future of the Supreme Court is at stake.

We know the numbers. The death of former Justice Antonin Scalia split the Supreme Court between four conservative justices appointed by Republican presidents (Roberts, Alito, Thomas and Kennedy) and four liberal justices appointed by Democratic presidents (Ginsburg, Breyer, Kagan and Sotomayor). The Republican Senate, in an unprecedented stance, has refused to call a vote on President Obama’s nominee to replace Scalia.

During the next four years, the new president will likely nominate not only Scalia’s replacement but also an additional three new justices. Since 1971, the average age of retirement for a Supreme Court justice has been just under 79 years. Ginsburg is 83, Kennedy is 80, and Breyer will be 78 in mid-August.

The new justices will set the direction of the Supreme Court and the values that guide it for the next generation. Scalia, after all, was on the court for 30 years before he died. Thomas has been on the court for 25 years and is still only 68.

We know the numbers, but many don’t seem to truly grasp their central importance to our work. Indeed, only at 11:15 p.m. on the first day of the Democratic Convention was the status of the Supreme Court briefly mentioned. Many of Bernie Sanders' supporters appear willing to jettison the Court because of their distress over Hillary Clinton’s behavior or some of her policies.

The Supreme Court can enable or disable our work. In the last decade the justices have made it much harder to challenge wealth and power, to nurture the weak and assist the poor, to extend social justice to minorities, to reduce violence, stop discrimination and defend the right to vote. One could write a book about the recent work of the Supreme Court but to make concrete the crucial impact of the court on a progressive future, here is a small sample of what the Court has wrought.

Democracy: The Supreme Court’s most infamous and widely discussed intervention occurred in 2010 when it overturned a corporate campaign spending ban first advanced by Teddy Roosevelt. The infamous Citizens United decision allowed corporations and unions to spend unlimited amounts of money, much of it “dark money,” hidden from public scrutiny.

Citizens United changed the nature of American democracy. In the first five years after the decision, $1 billion poured into super PACs, $600 million of which came from just 195 donors and their spouses. Between 2006, before the Court decision, and 2014, after the decision, independent expenditures increased 25-fold.

In 2014, the Court allowed unlimited individual contributions. Both decisions were by a 5-4 vote. Dissenting Justice Breyer predicted, “If the court in Citizens United opened a door today’s decision may well open a floodgate.”

And so it has. In 2012 the Republican National Committee and its two Congressional campaign committees spent a total of $657 million. In early 2015 the Koch brothers announced that they and their friends would spend $889 million on the 2016 election. That is buying an awful lot of dirty tricks, non-profit front organizations, lawsuits and, dare I say, candidates.

There is much talk about the need to reverse Citizens United, but that can’t be done through Congress. Only a constitutional amendment or a Supreme Court reversal can. The chances of the former are infinitesimal. If Hillary Clinton wins, the chances of the latter are quite good.

In 2008, the Supreme Court ended 150 years of laws and policies that steadily expanded the electorate when it upheld an Indiana law requiring a photo ID. The vote was 6-3 when Justice Breyer voted with the conservative majority. The justices conceded that those least likely to have state-issued identification are disproportionally poor and nonwhite. The state had offered no examples of voter fraud that would have been prevented with voter ID.

Since the Supreme Court decision, at least 23 states have either introduced more restrictive voter procedures or tightened those in operation.

In 2013, the Supreme Court upped the ante by allowing states to require proof of citizenship in order to register to vote. Earlier this year Kansas and Georgia and Arizona became the first to adopt that requirement.

In 2013, by a 5-4 vote the Supreme Court effectively struck down the heart of the Voting Rights Act of 1965 (VRA) freeing the nine covered states and dozens of counties in New York, California and South Dakota to change their election laws without advance federal approval.

Even when we are able to defend our democracy, our victories have been fragile. In 2015 the Court upheld the right of citizens to take authority over redistricting out of the legislature and invest it in an impartial commission. That same year the Court overturned an Alabama law that racially gerrymandered election districts. Both decisions were by a 5-4 vote, easily reversible by a new Court.

Corporate power. Several decisions by the Supreme Court have increased the power of corporations over workers and consumers.

In 2001, the Court interpreted a 1925 federal law allowing arbitration among businesses as a preemption of state laws protecting the right of workers to access the traditional judicial system. They did this despite the clear language of the original law: “Nothing herein contained shall apply to contracts of employment of seamen, railroad employees or any other class of workers engaged in foreign or interstate commerce.”

In 2013, the Court overturned a California law making arbitration contracts that contained “unconscionable” provisions unenforceable. Astonishingly, the Court concluded that even if the arbitration procedure is designed in such a way as to make it impossible for a worker or consumer to win, the results of arbitration are still legally enforceable.

Today employment and consumer contracts routinely contain forced arbitration clauses that prohibit access to the traditional justice system. Unlike that system, arbitration is governed by corporate-friendly rules. As Catholic University of America law professor Peter B. Rutledge notes, “Arbitrators do not have to follow precedent. Arbitrators also are not bound by the same rules of evidence and procedure as courts. Often there is no transcript, and arbitrators are not obligated to provide detailed findings of fact and conclusion of law in their awards.” Complainants can be forced to travel thousands of miles and put up thousands of dollars up front to attend an arbitration proceeding.

Another way the Supreme Court can expand corporate power is by weakening the ability of workers to wield collective power.

Scalia’s death earlier this year resulted in a series of 4-4 votes. One tie vote resulted in a victory for workers when it left intact the decision of the U.S. Court of Appeals for the Ninth Circuit upholding a California law requiring non-union workers to pay their “fair share” of the collective bargaining costs. The decision affects eight northwestern and western states. If Scalia, or another likeminded justice were on the bench the resulting 5-4 decision overturning California’s law could have meant the demise of a nearly 40-year-old Supreme Court precedent that applies to more than five million public employees in 23 states and the District of Columbia.

In 2007 and more broadly in 2010, the Court overturned 70 years of precedent when it declared that the Second Amendment applied to individuals, not militias. It was a watershed moment and made gun control infinitely more difficult. Since then, rather than gun control initiatives we have largely witnessed a race between states to see which can make guns most ubiquitous and conspicuous. The only remaining sacrosanct areas at this writing appear to be churches, courts and legislatures. The two Court decisions were by a vote of 5-4.

In 2016 a 4-4 tie left in place a decision of the U.S. Court of Appeals for the Fifth Circuit overturning a 2014 executive order that allowed as many as five million unauthorized immigrants who were the parents of citizens or of lawful permanent residents to apply for a program that would spare them from deportation and provide them with work permits.

A woman’s right to choose

In 2014, the Court made it more difficult for poor women to prevent pregnancy when it held that privately held businesses could be exempt from the Obamacare requirement that insurance cover contraception based of the company’s religious beliefs. The vote was 5-4. Justice Ginsburg warned in her dissent of the potentially broad impact of the Court’s decision, given the attitude of religions toward women and gay people, “The Court’s expansive notion of corporate personhood invites for-profit entities to seek religious-base exemptions from regulations they deem offensive to their faiths.”

One of the Court’s final rulings this year overturned a Texas law that would have effectively ended access to legal abortion for millions of women. The vote in this case was 5-3 because Kennedy voted with the Court’s four liberal justices. Two new justices could reverse that decision.

In 2011, the Supreme Court dismissed a gender discrimination suit by thousands of women across the nation against Walmart. The Court threw out more than 40 years of class action jurisprudence by ruling that class members must prove they have suffered the same injury, not just a violation under the same law. The vote was 5-4.

In 2015, in a case involving discrimination against minorities in housing, the Supreme Court did uphold the traditional standard for deciding whether discrimination has occurred: Complainants must identify a business practice that has a disproportionate effect on certain groups of individuals while not being defensible by sound business considerations. The Court had been asked to substitute a much higher standard proof of “intentional discrimination.” The vote was 5-4.

In 2009, the Supreme Court ruled that prisoners have no constitutional right to DNA testing even though at the time such testing had already played a role in 240 exonerations, according to the Innocence Project at Cardozo Law School. In 103 of those cases, the testing also identified the actual perpetrator.

A new liberal justice could make even our victories much sweeter. The American Care Act was upheld by the Supreme Court in 2012 by a 5-4 vote when Justice Roberts, surprisingly, voted in favor. But the Court rejected the Act’s Medicaid expansion mandate. Almost eight million people lack health insurance as a result.

The Supreme Court meets only six months a year. The media dutifully reports the decisions, debates the meaning for a day or two and then moves on. We’re not exposed to the cumulative impact, nor the long-term consequences.

Supreme Court decisions reach into every aspect of our lives, both political and personal. The very structure of how we govern, our ability to elect progressive candidates and enact progressive policies is determined by their interpretation of the constitution and legal precedents. There have been activist Courts of all stripes but none, at least since the early 1930s has been as determinative of our ability to make a progressive future as this one.

In this election, removing the Supreme Court as a key obstacle in the way of achieving a fair and just future should be the goal that spurs our activism and our ballot choice.