The Revenge of Monoculture: The Internet gave us more choices, but the mainstream won anyway

Don't look now, but corporate pop and celebrity culture is alive and well — and harder than ever to escape 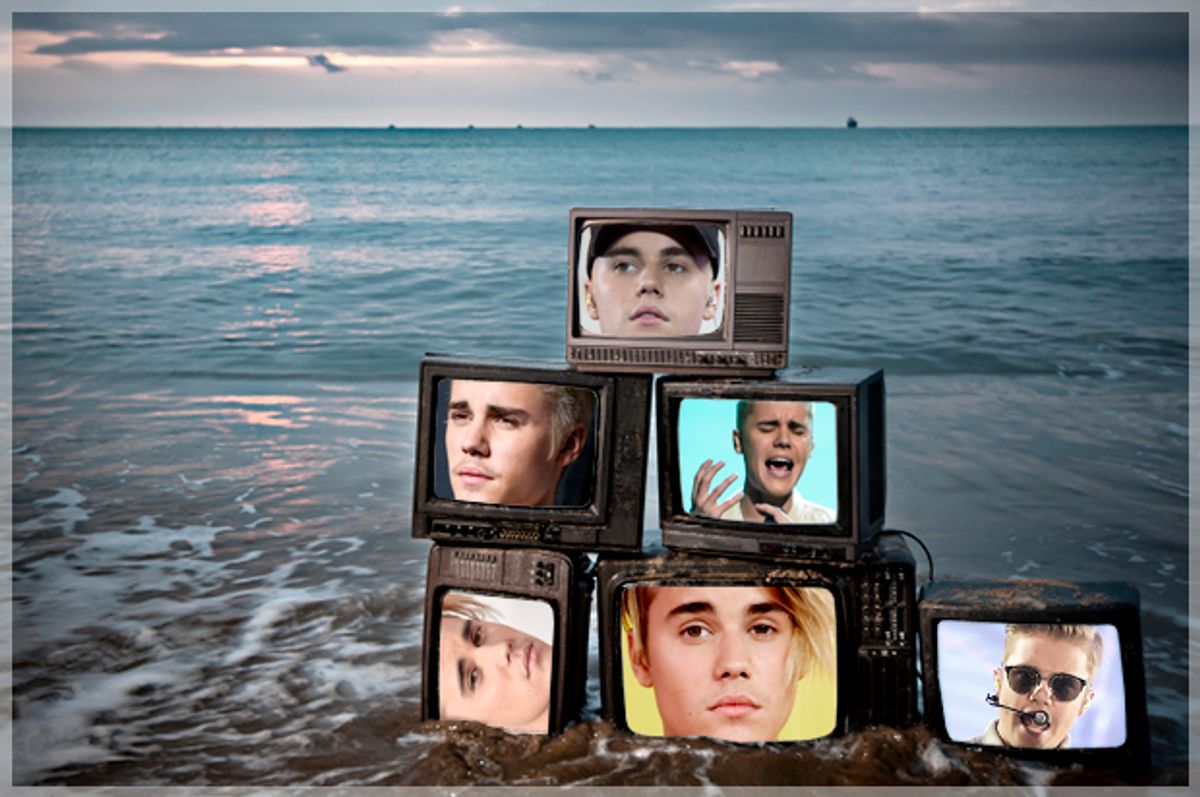 Is it gone? Do we miss it? Do we want it back? Are we glad it’s history? I’m talking about the so-called monoculture, and I’m not sure whether we were supposed to be nostalgic or gleeful about its so-called passing.

The fight over the monoculture is a funny, ambiguous one: Some have argued that having a shared Anglo-American culture gives us a communal sense of belonging together, sharing concerns and values at a time when politics, ethnicity and religion often divide us. Being able to share in the wonder of a groundbreaking new Beatles album, to exalt over the release of “Purple Rain,” to welcome a big summer movie, was a sign of a culture that worked, where people listen to each other and connect through their tastes. Figures as different as Robert Christgau — the Silent Generation journalist who helped invent rock criticism — and Touré — the Gen Xer who writes on a wide range of topics, especially black music — have lamented the loss of this kind of shared experience. Touré wrote about what he calls Massive Musical Moments this way:

In these Moments, an album becomes so ubiquitous it seems to blast through the windows, to chase you down until it’s impossible to ignore it. But you don’t want to ignore it, because the songs are holding up a mirror and telling you who we are at that moment in history.

These sorts of Moments can’t be denied. They leave an indelible imprint on the collective memory; when we look back at the year or the decade or the generation, there’s no arguing that the album had a huge impact on us. It’s pop music not just as private joy, but as a unifier, giving us something to share and bond over.

But cyber-utopians looked at the downside of this kind of cultural unity and offered something else: Instead of the lockstep world of three networks, a handful of radio stations and a limited number of news sources, the Internet would offer a wild range of options. Chris Anderson’s book “The Long Tail” was only one of the celebratory works that made it sound like an eclectic digital paradise was inevitable and imminent: Every bit of niche culture would find its audience, and the idea of the mainstream — all that obligatory stuff everyone was expected to like — would wither away. Why listen to tired AOR playlists and watch the same old sitcoms when manga, K-pop, Nordic metal, comedy offerings on YouTube and infinite indie everything would be available around the clock, to anyone with an Internet connection? As Anderson wrote:

An analysis of the sales data and trends from these services and others like them shows that the emerging digital entertainment economy is going to be radically different from today’s mass market. If the 20th-century entertainment industry was about hits, the 21st will be equally about misses.

With “diversity” a rallying cry for most on the liberal left, this fit what about half the audience wanted. Since many conservatives were urging a breakdown of the “mainstream media,” there seemed to be something in here for almost everyone. (Silicon Valley’s Peter Thiel talked in his speech at the Republican National Convention about the “ossified monoculture” that his hero Donald Trump would help to defeat.) And if you are a Poptimist — the strain of music critic who exalts popular taste over stuffy old critical biases — the disappearance of the monoculture is a good thing, too: It sets taste free. Who can object to freedom?

Looking at the summer of 2016, it’s still hard to determine whether a monoculture is something we want or we don’t. (In agriculture, the issue is similarly vexing.) But one thing that’s becoming clear: While there is plenty of diversity — of opinion, of musical style, of offerings in television and movies — the monoculture is as strong as ever. Whether it’s better or worse is a whole other question, but the mainstream, rather than fragmenting, has reinforced itself in a big way.

So while it’s possible, as it’s always been, to retreat from pop culture and rely entirely, say, on a diet of 18th century Baroque piano music, Japanese anime and “Twilight Zone” reruns, the gravitational pull of the mainstream is strong. Log onto Twitter, and be drawn into sports culture whether you want to or not: Not just from notifications, but from the NFL games that will stream there.

How about movies? Of the 10 highest earning films of 2016, the top nine are either kids movies or comic book properties. The last one — “Central Intelligence” — is a comedy-action movie with blockbuster actor Dwayne Johnson. These are also the movies that get talked about online, in all but the artsiest magazines, in the ads that probably take up more space in your newspaper than the reviews do.

Meanwhile, even the most serious actors — Ben Affleck, Scarlett Johansson, Robert Downey, Jr. — are devoting a lot of their time to superhero films and action movies. We’ve barely had time to recover from Affleck’s appearance in “Batman v. Superman” before we get the chance to see his cameo in “Suicide Squad,” to catch his starring role wielding a gun in “The Accountant” and to see the new trailer for “The Justice League.” Whether or not you like Affleck’s sometimes drowsy and wooden style, this is a guy who made his name with indies by Richard Linklater and Kevin Smith.

What else happened this week? The pop culture news that has broken through the onslaught of the political conventions has mostly involved Comic-Con, which attracted 130,000 people to San Diego this year and which movie studios ignore at their peril.

To be clear, there are all kinds of “culture” coming right now, including a wide variety of music. But the media coverage of music this week — the way most people hear about what’s being released and what matters — was mostly about MTV’s Video Music Awards. The VMAs have nominated, over the years, Herbie Hancock for “Rockit,” Cindi Lauper for “Girls Just Want to Have Fun,” Paul Simon, Talking Heads, the Verve, Beck, D’Angelo… Stylistically, that’s all over the place.

This year, it’s Adele, Beyoncé, Drake, Justin Bieber and Kanye West: Kiddie pop, and superstar R&B. Some of these videos are of high quality — Beyoncé's “Formation” is the centerpiece of the aesthetically and politically daring “Lemonade” and would be nominated in any year. But the only surprise here is that Taylor Swift didn't get nominated. And Swift is so huge — and celebrity so dominating a force in both culture and the way we talk about it — that we don't have to look far to find her. There she is, in the video for Kanye West’s “Famous”… and in the articles about Taylor Swift being snubbed by the VMAs this year. She’s here even when she’s not here.

“Many people have categorized the 2016 presidential election as a referendum on the very soul of America,” Amy Zimmerman wrote in a Daily Beast story about the awards, topped with a picture of Swift. “But I would argue that nothing has illustrated the eternal, nationwide battle between good and evil quite like Taylor Swift and Kanye West’s seven-year beef.” She’s kidding, in part, but plenty of people who aren’t kidding see things this way.

So are we better off than we used to be? That’s hard to say. But if the mainstream used to mean AOR acts like Fleetwood Mac and The Eagles, “uplifting" Oscar movies alongside Spielberg-style action films, and bland network programming, only one medium has broadened drastically in the Internet age. Television is not only more “diverse” — both racially and in terms of style — and smarter, it’s got a discourse around it that debates “Breaking Bad” and “Game of Thrones” and “Empire” and everything else. At the Emmys, “Transparent” and “Master of None” and “The Americans” will all be in the mix.

But when it comes to the movies and films that make money and draw attention, the list gets pretty thin. It’s songs by corporate-branded celebrities (at various degrees of quality) and comic-book movies.

So why did this happen, when it was supposed to go the other way? Like any cultural change, it likely comes from a swirl of economic, technological and sociological factors that we’ll only understand fully in retrospect. History shows that capitalism tends towards monopoly unless some counterforce pushes back, and the internet has not yet found its Teddy Roosevelt. The biggest musicians and actors bombard us with tweets, puffy magazine stories and online marketing until their “brands” are ubiquitous. But part of it may be the Paradox of Choice: If everything is available, all the time, we’re likely to get overwhelmed and just fall back on what we know already (or what’s been the most aggressively marketed to us.) If you’ve ever stared at an enormous, multi-page menu and decided to get the burger or the steak, you know how this works.

The internet's near-infinite offerings are not the only cause, but it’s worth looking at what’s happened since it arrived. We’ve always had popular and fringe, overexposed and undersung, but the proportion has changed. In 1986, 31 songs hit number one, and came from 29 different bands or artists. By the period from January 2008 to September 2012 — we’re into the first years of digital dominance — half the number one songs are turned out by just six artists. (That’s Katy Perry, Rihanna, Flo Rida, The Black Eyed Peas, Adele and Lady Gaga.) New York magazine calls it “the monopoly at the top.”

And the changes in online media have followed similar contours. “The top 10 web sites accounted for 31 percent of US pageviews in 2001, 40 percent in 2006, and about 75 percent in 2010,” Michael Wolff wrote in Wired. Now with Facebook increasingly the way most Americans get their news, the faux-consensus will be even tighter.

So we might not all buy the same album anymore. But the whole country was talking about the latest “Star Wars” last winter, and that seems likely to repeat for at least the next few years. Just as television news — whether on the left or the right — has picked up the hectoring tone of Fox News broadcasts, most online media has borrowed the snark of Gawker. It’s pretty clear that Taylor, Kanye, Bieber, the Kardashians and numerous superheroes — most of which present themselves as misunderstood underdogs — will continue to be impossible to escape. We can pretty much bet what kinds of movies will dominate media coverage and the box office next year, and it won’t be hard to guess who will produce the most celebrated videos and best-selling songs of 2017.

It may be an improvement over the Eagles. But if this isn't monoculture, I don’t know what is.