Get out your wallets, America: It might not be long before we're bailing out "too big to fail" banks again

Despite assurances that things changed after 2008, banks are bigger, less transparent and riskier than ever 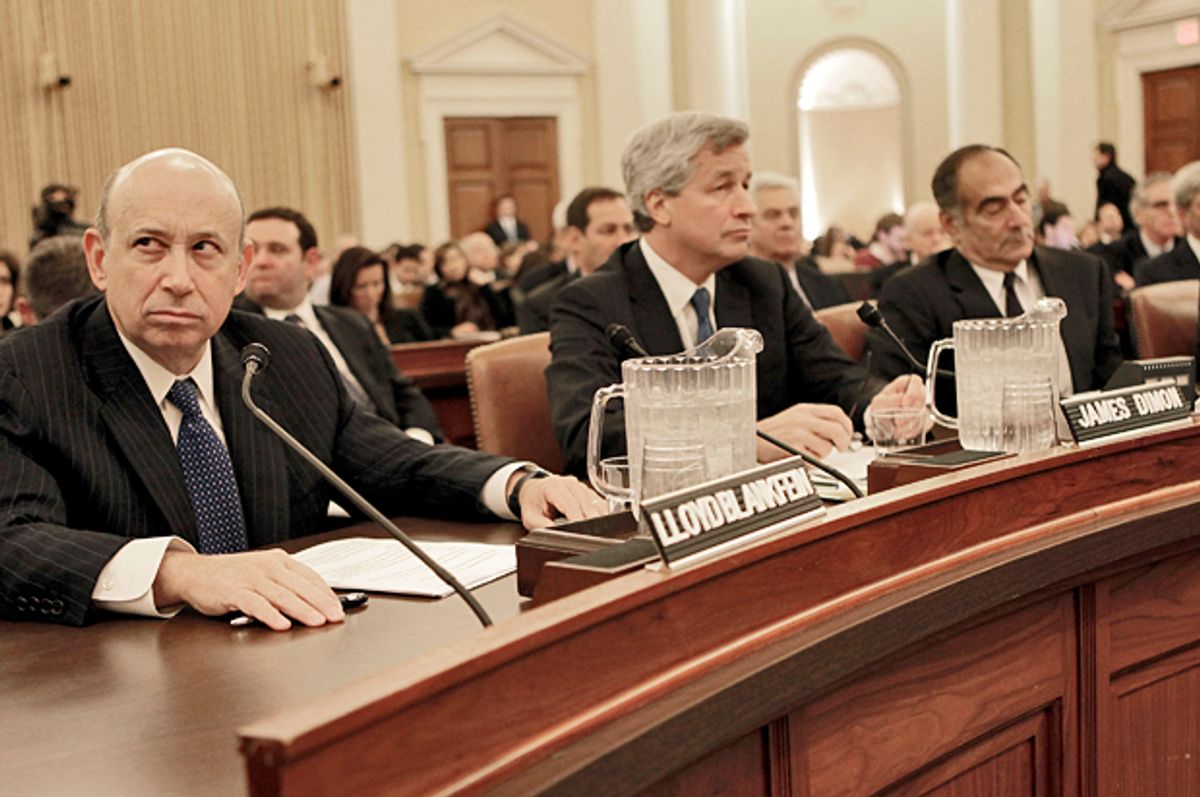 When you enter the ballot booth this November, keep in mind that you could very well be voting for the captain of sinking ship. You may be voting for the next president who will have to steer us through a financial meltdown, and it's all because we never truly learned from our mistakes.

According to Noam Chomsky and other political and economic experts interviewed for this article, we may be heading to another major bank bailout.

“We don't actually know a lot of what goes on in banking,” Anat Admati, a professor of finance and economics at Stanford University, told Salon. “We don't have good monitoring of it.”

Admati said a lot of what banks do is deeply buried in vast financial records, so it's extremely difficult to follow what industries banks are involved in and what they're doing. She said the banks benefit from this opaqueness, because it means they can get away with risky business practices while no one knows what's going on.

The banks are also very interconnected, in various ways. Through contracts and their investments, these enormous and volatile corporations are closely working together and exposing themselves to danger together, which means when one big bank falls, they all start to tumble.

“That's why there may be a bailout, because the system is so connected, fragile and opaque,” Admati said.

Noam Chomsky, political philosopher and linguist, has said on several occasions that there will likely be another bank bailout in the not-too-distant future, because we haven't reined the banks in or prevented them from growing. When we asked Chomsky the main reason another bailout may occur, he said that “in brief, 'too big to fail,' the implicit government insurance policy, which, according to the [International Monetary Fund], provides most of the profit of the big banks by various means.”

As Chomsky has explained before, the banks can take massive risks for massive profits because they know the government will bail them out if things go terribly wrong. Instead of ending the world of banks that are “too big to fail” and preventing banks from operating in ways that could again sink the economy, we have guaranteed them that the taxpayers are ready and waiting when they make another catastrophic mistake.

One of the major risks banks take is not having enough equity to be considered stable. If there is a financial crisis, a bank with a lot of equity has a buffer that can help prevent it from failing, but many banks currently operate with less than 10 percent equity. “The numbers are pathetic,” Admati said. She said they've improved slightly since the financial crash, but their equity numbers are still dangerously low.

Through various mergers and expansions, these banks have become so large that it's hard to fathom how large they truly are. “All student debt in this country, which is considered a huge problem, is approximately $1.3 trillion,” Admati said. “That is a fraction of JPMorgan Chase. That is like half of the accounting numbers of JP Morgan Chase.” She said these banks have their hands in nearly every part of the economy, and they're not going to get smaller any time soon unless something is done.

Richard Wolff, a professor of economics emeritus at the University of Massachusetts, Amherst, also believes we are facing another major bailout if things don't change soon. He said the “growth of student and auto loan debts relative to mass capacity to carry such debts” could be the cause.

Admati proposed a more sinister future event that could crash the economy, and it makes you think of the USA Network show "Mr. Robot."

“A cybersecurity [breach] is certainly something that can happen at any time,” she said. “That's kind of the nightmare.” She pointed to the “cyberheist” that happened earlier this year, where the Federal Reserve Bank of New York lost $81 million to hackers. “Imagine that on a bigger scale,” she said.

Both Wolff and Admati pointed out that the Dodd-Frank Wall Street Reform and Consumer Protection Act, which came after the 2008 financial crisis and was meant to prevent another one from happening, hasn't adequately changed how banks operate.

Wolff said Dodd-Frank, as it's been used, hasn't prevented big banks from getting bigger and “has failed to address the huge problem of active collusion between major bank lenders and politicians.” He said bankers and politicians are still “cutting dangerous loan deals for mutual benefit.”

“Dodd-Frank tries to do a lot of things,” Admati said. “It gives all kinds of authorities to regulators, the same regulators who failed before, it gives them more slightly different authorities to prevent [another bailout], supposedly, or to deal with it.”

However, Admati said, it has not been used in a way that would prevent another bailout. Beyond the issues that have already been mentioned, banks still have not submitted acceptable “living wills” that are supposed to explain how the biggest banks plan to stay afloat in the face of a future financial crisis. The credit rating agencies that gave bad investments good ratings before 2008 are still in need of major reform. Plus, much of the rules Dodd-Frank was supposed to create still haven't been finalized years later.

“I'm not happy, because I think they can do much better,” Admati said of the politicians who swore they would prevent another crash.

Things can be done. As Bernie Sanders explained, politicians can use Dodd-Frank to break up the big banks. The credit rating agencies can be reined in. We can finalize the Dodd-Frank rules and enforce them. We can demand the banks be more transparent and carry more equity. And if we do not do these things, we will likely be pulling out our wallets when the banks skip out on the bill again. Remember, it's the banks that get bailed out when the economy crashes, not the people.