Strange, but true: Pokémon Go is a ray of hope in a bleak world

In a time of division and fear, Pokémon Go brings people together, helps with depression, and breaks down prejudice 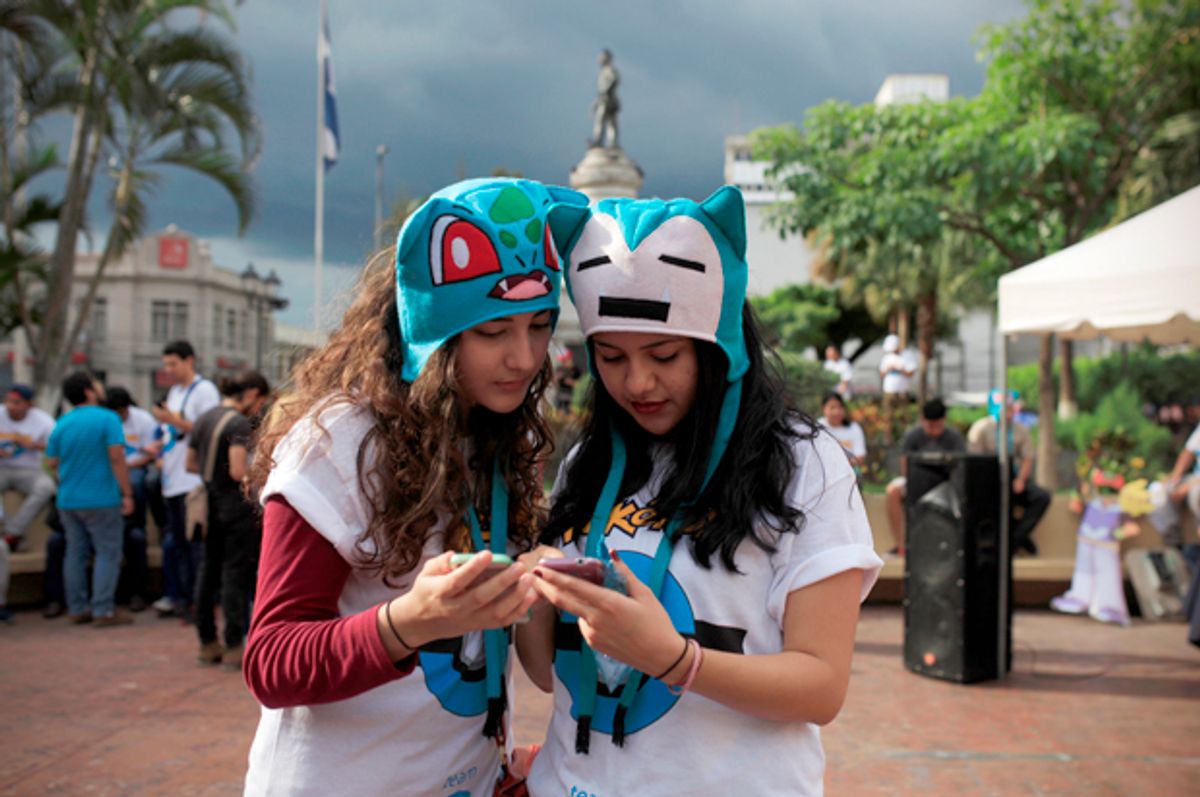 Chaos is the new norm. Though some news headlines may still be capable of eliciting shock, they will hardly surprise you anymore. It is a sign of the times when Chachi from the “Happy Days” can return from the celebrity wasteland to prime-time television as a speaker at the Republican National Convention. In Nice, a truck became a weapon of mass destruction when it plowed through a crowd for more than a mile and killed 84 people. Deliberate shootings of African Americans and police officers were seen in Minneapolis, Baton Rouge, and Dallas, yet, as Gary Younge writes, it remains “easier to obtain a semi-automatic gun than to obtain health care” in this country. In an attempt to flex his credentials as a future Secretary of Islamophobia and expose a mind bereft of constitutional knowledge, Newt Gingrich called for the testing and deportation of all Muslims who are Sharia sympathizers. Donald Trump, who has little appetite for reading or complexity, would potentially preside over such a world and make decisions of consequence. And so it is little surprise that 75 million people sought a reprieve from the madness and have chosen instead to tune out and hunt for Pokémon.

Pokémon Go is a pandemic. The game, which is available for free download on Android and iOS, is a resurrection of the Nintendo-owned Pokémon brand that became popular in the late 1990s. It is now once again ascendant. The feverishly downloaded app uses a cellphone’s GPS and camera to make creatures called Pokémon “appear” on a user’s screen in and around his or her surroundings, with the ultimate goal being to capture them. This encourages unprecedented physical exploration, for to catch them all, a player has to exhaustively wander around real-world locations in pursuit. And short of leaving the planet, players are going almost everywhere. A 19-year-old girl in Wyoming discovered a dead body in the river during her quest. Two Canadian teenagers, oblivious of their surroundings, made an illegal border crossing from Canada into the United States during their searches. The Auschwitz Memorial had to ask gamers not to play on its grounds. A Bosnian nongovernmental agency is encouraging users to be wary of landmines left over from the 1990s conflict during their pursuits. Inadvertently, players are also stumbling into health.

Quite simply, a Pokémon is so tantalizing that it compels us to do the unimaginable: exercise. Deconditioned gamers griped about soreness after being forced to walk, run, and jump during their hunts. Since the app’s launch on July 6, its effect on physical activity is best captured through fitness tracker data. Users who mentioned Pokémon Go in their trackers were found to be walking 62.5 percent more than usual. “Pokémon Go” is being entered in workout logs by users of Under Armour's MyFitnessPal, with individuals burning between 250-300 calories per session. This melding of fitness and gaming is unprecedented and encouraging at a time when more than one-third of the United States is obese. The condition alone contributes to heart disease, diabetes, stroke, and even cancer. Though the app is unlikely to be a panacea for obesity, high blood pressure, or diabetes, it sheds the classic association of gaming with prolonged immobility and establishes a new and hopeful paradigm through its incorporation of fitness and a connection with the outdoors.

Apart from encouraging gamers to leave their homes and obtain some much needed vitamin D from the sun, Pokémon Go has also positively affected those afflicted with mental health diseases. Those grappling with anxiety and depression have noted an improvement in mood due to the app, which promotes social interaction. In addition, the hippocampus (associated with learning and memory) and reward pathways (associated with motivation and goal-orientation) of the brain, which are understimulated in depression and inevitably atrophy, are hyperstimulated during game play based on fMRI studies. The app thus becomes a neurological antidote to depression. Professor Daniel Freeman from the department of psychiatry at Oxford University notes: “It [Pokémon Go] could be used to refocus your attention away from threat by getting you immersed in engaging activity, or it could be used to present the things you fear for long enough to help your anxiety naturally decline. Combine the right psychological science and augmented reality and you’ll have a really powerful treatment tool.”

The Pokémon Go hysteria, which has even gotten the attention of Donald Trump and Hillary Clinton, can mean whatever we want it to mean. It can be considered a transient fad, an escape from the macabre headlines, or something more profound. In the wake of a Republican National Convention that was, as David Remnick describes, a “four-day-long Fox-fest, full of fear mongering, demagoguery, xenophobia, pandering, and raw anger,” President Barack Obama reminded us about the importance of seeing ourselves in others. In a world currently riven by class, religion, and race, Pokémon Go attempts to do just that as it unites disparate individuals and allows them to shed their toxic assumptions. In the context of our times, this may potentially be the app’s greatest contribution. And perhaps due to our insatiable desire to catch all the Pokémon, we may just stumble upon the elusive land of mutual respect, justice, and love.