Obama, Clinton and a permanent state of war: The never-ending bloodshed that no one wants to talk about

During the DNC there was no self-introspection about a policy that continues to fail the U.S and the world 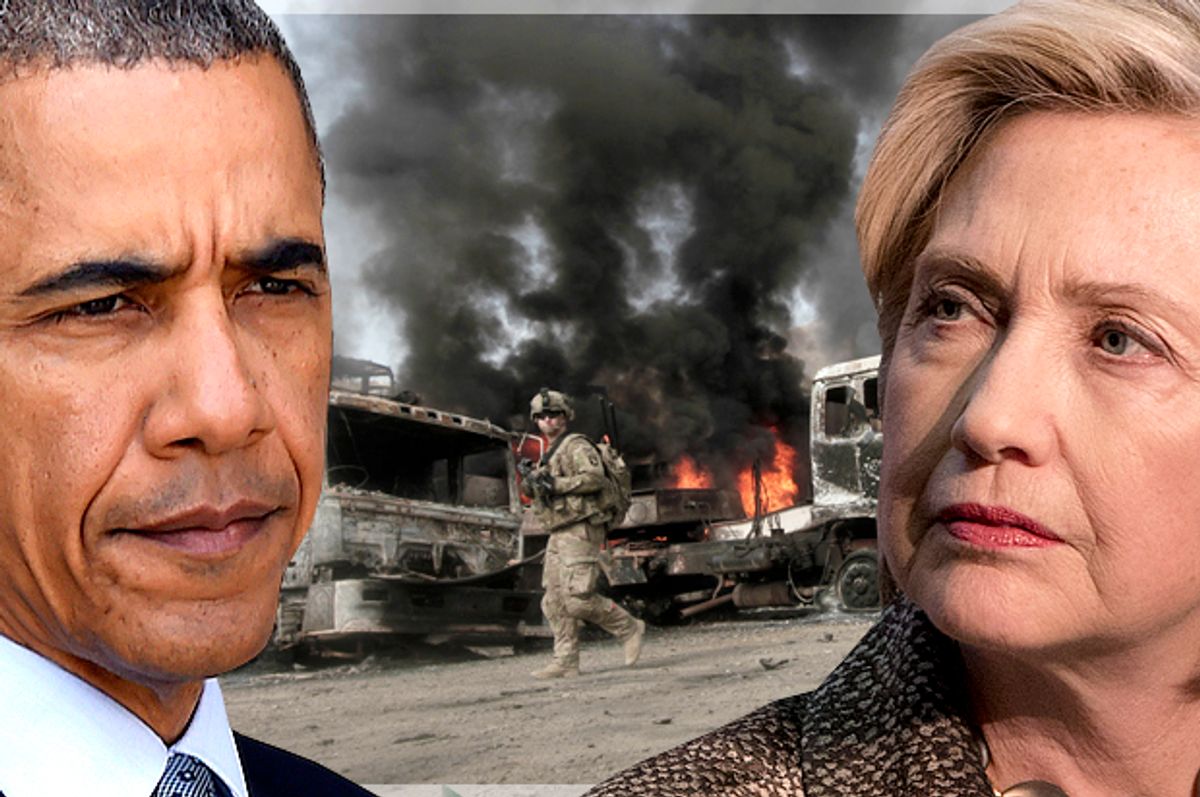 Walking into Philadelphia’s 30th Street Station, the morning after Hillary Clinton had given her acceptance speech, there was an ambient glow emanating from  women of all ages who had been at the DNC and were now waiting for their train back to  reality.

I have seen this kind of politics induced collective euphoria before so I decided to leave these folks alone and not do interviews so they could  have the morning after to themselves.

That was not the time to ask them about Clinton’s central role in writing the blank check for the U.S. war on terrorism that has in reality proliferated terror across three continents and set off the worst refugee crisis since World War II.

A group of super-delegates and elected delegates had decided that Clinton's past decisions on these issues would not disqualify her.

Back on election night 2008 I was outside the Rutgers dorms in New Brunswick, New Jersey when Barack Obama was declared the winner. Thousands of college students poured out of their dorms and onto the streets in a spontaneous celebration of the victory of “hope and change.”

Their joy and exuberance was contagious. On that night even the cops embraced them.

I often wonder where those  millennials are today?  How many are unemployed, have put off plans to get married, are stuck in low paying  jobs, or are still living with their parents stuck  on the treadmill that is their student debt.

Eight years later, the candidate that ran on “hope and change” has provided perfect continuity with the war on terror that was started by his Republican predecessor, except the civilian casualty list is much longer and the theater of the war much wider.

Even as alienated American combat soldiers come back, suffering from post-traumatic stress from the war without end, and murder our policemen, we ignore the connections between the chaos  we promote abroad and the blowback we experience here at home.

We are always the victim.

And now President Obama, the Nobel Peace Prize winner,  is ready to hand the baton in our war fighting marathon to his successor, having come full circle himself, adding boots on the ground in both Iraq, Afghanistan and in Syria.

It seems nobody, not even Congress, wants to weigh in on the permanent state of war we are in. American coverage has shrunk to spot news, which chronicles one horrific act after another in under 45 seconds. Incredibly, any decent-sized American tornado will get more coverage.

Yet, even without our attention, the war drones on and the human misery continues to mount. What do you think  kids feel in these conflict zones  when they are out somewhere collecting wood or water, always keeping one eye skyward, waiting for the incoming missile from an American drone?

We just don’t get how our accidentally  killing civilians with drones might radicalize  the surviving family and tribe.

“The fact remains, however, that there is far too little coherence to U.S. actions in Iraq, Syria, and the rest of the region, and far too little realism and transparency in reporting on the real world impact of U.S. actions,” wrote Anthony Cordesman, with the Center for Strategic and International Studies, earlier this year. “The United States remains mired in various forms of creeping incrementalism that seem largely reactive and too little and too late to exploit the opportunities that do exist.”

Sadly, over the four days of the heavily choreographed convention there was  no such self-introspection about a policy that continues to fail America and the world on a colossal scale.

In Cleveland,  we got podium pounding and chest beating but no new ideas, just double down on the ones that have already failed spectacularly.

In the same month that our major parties convened their national conventions in Baghdad a truck bombkilled close to 300, a children’s hospital in Syria was bombed and UN aid caravan was ambushed in Nigeria. And that’s just the headlines.

Back in April of this year the Special Inspector General for Afghanistan Reconstruction warned that things were seriously deteriorating in terms of security there. “According to the United Nations, Afghanistan experienced record-high civilian casualties from the ongoing hostilities in 2015: more than 3,500 killed—a quarter of them children—and nearly 7,500 wounded,” according to SIGAR.”

In March the UN Secretary General’s Special Representative for Afghanistan  told the Security Council “for 2016, survival will be an achievement for the National Unity government.”

“I am surprised that people don’t see the connection between our invasion of Iraq, which Hillary Clinton voted for, endorsed and spoke out about, the bombing of Libya and our role in creating ISIS,”said Leslie Harris from Dallas who came to the convention as a guest.

As for the language in the Democratic Party platform, it reads like it was written by someone kept incommunicado in a storage locker for the last 15 years, before we had embarked on a multi-state response which has Americans killing people in several countries without basic paper work, like say, a declaration of war.

“Democrats will protect our country,” says the Democratic platform. “We will strengthen our homeland security, deal wisely and firmly with those who seek to imperil America or our partners, deter aggression, and promote peace. We will use all the tools of American power, especially diplomacy and development, to confront global threats and ensure war is the last resort.”

Yet, for years now all we’ve been doing is waging war and adding to the civilian body count  that’s now many times higher than the  number of casualties we took on September 11th.

The fact that this policy was executed by our first African-American President, or gets continued by our first female  President doesn’t expiate our sins and our lack of imagination.