"The Night Of" recap: The defense gears up, the wild calls, and a slow burn erupts

In the fourth episode, "The Art of War," we begin to learn about Andrea, the woman whose death starts the story 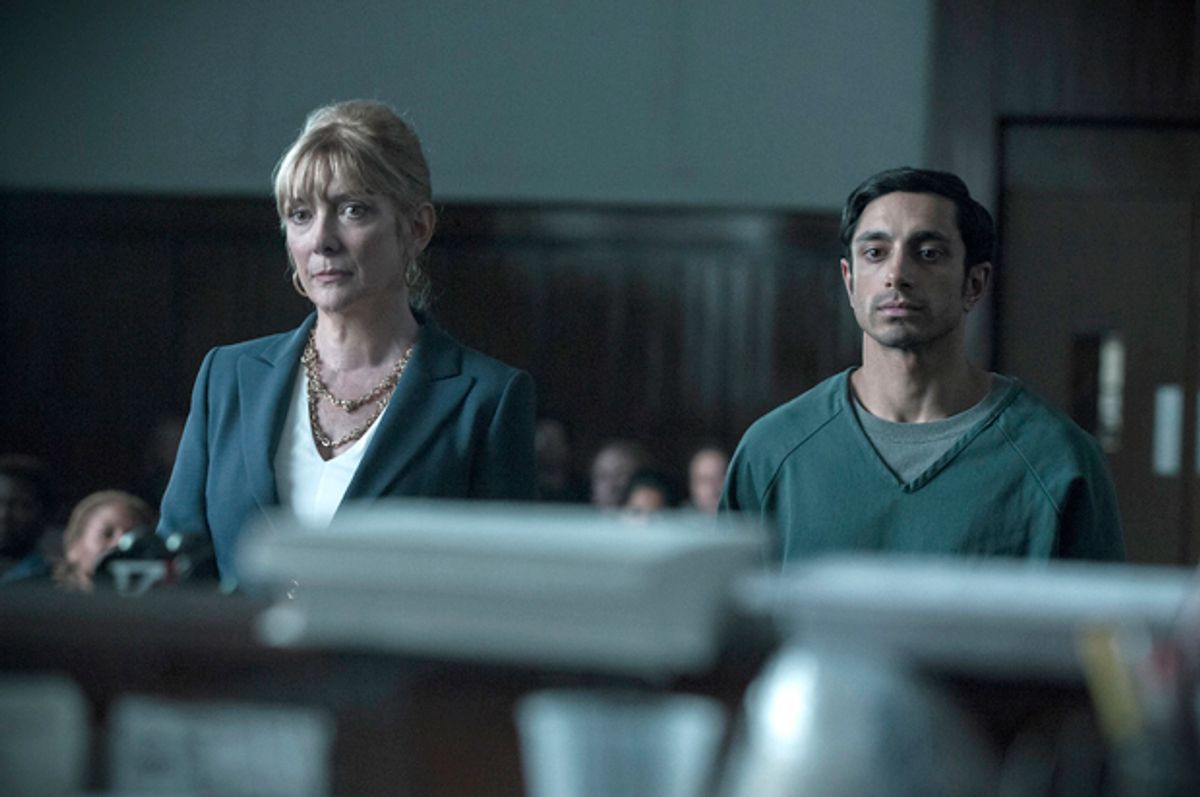 Glenne Headly and Riz Ahmed in "The Night Of" (HBO)
--

Note: This recap includes plot details for the fourth episode of "The Night Of."

This fourth episode of “The Night Of,” titled "The Art of War," earns its name through a series of skirmishes that are indeed artful (the parlay between Naz’s new attorney Allison Crowe and D.A. Helen), but also comical (the courthouse exchange between Jack Stone and Chandra, Allison’s junior associate, who oh-so-helpfully informs him that her father has eczema as well, “only not as bad”) and outright brutal (the beat-down Freddy delivers to a con who’s trying to muscle in on his turf). These skirmishes ratchet up the tension on the macro level of the narrative — particularly regarding Naz’s ultimate fate as a defendant — and, more movingly, in the more intimate character moments. This episode sets the stakes even higher than Naz’s freedom; his very soul seems to be on the line.

We open with a close-up on Naz’s incinerated mattress, a landscape of blackened, blistered fabric and singed stuffing; and, just as in “A Subtle Beast,” the use of intensive, abstracting camerawork is meant to illuminate something potent about the characters and themes that would drive the episode, and, by and large, the season as a whole. In that second episode, the fish-eye lens around the mounted deer head evoked innocence and doom. Here, the landscape reflects not only Naz’s current predicament—trapped, literally, in a hellscape filled with men who want to destroy him, with the burnt mattress foreshadowing his skin after another inmate attacks him—and the kind of man he’ll have to become if he wants to survive: blazed down to his core, able to embrace the bombed-out ugliness inside of him.

This is an ugliness that Freddy has seemingly embraced within himself. Michael K. Williams endows the character with a boxer’s physicality, all thunder and grace, even in the scenes where Freddy is not viciously pummeling the skull of an interloper. Freddy aspires to be Naz’s jailhouse Buddha through casual gestures of protection, such as swapping out the orange jumpsuit Naz must wear to court (a signifier of a violent felon) with a more benign dark blue one; but his biggest gift to the younger man is the promise of violence. In the hands of lesser writers and performers, Freddy could have been a stock character, the cynical lifer with an unexpected protective streak; here, he has clear and profoundly poignant reasons for wanting to protect Naz: He wants to be, if not a formally-educated man, then at least a man who can talk books and ideas, a man who is more than just brute strength and a barbed will.

The scene where Freddy expounds slowly, sonorously, on “The Call of the Wild” as the real blueprint to making it in Riker’s Island (suggesting that, while “The Art of War” is important, it doesn’t match the insights of “those husky dogs.”) is already one of the finest moments on American television this year. Williams lends every line a deftness and heft that speaks to Freddy’s pride in finding the inner merits of a book that every schoolkid reads as a mere adventure story — not to mention his poignant, even sweet, hope that Naz will reciprocate his interest in it.

If Freddy’s interest in protecting Naz is more overtly stated, then the show employs its trademark subtlety in explaining why, exactly, Jack Stone is still on the case—even after he’s been replaced with soft-spoken legal powerhouse Alison Crowe (Glenne Headly). During yet another scene of Jack slathering his poor feet in Crisco, he gets a call from a client arrested for a violent crime. That kid, a clearly-guilty boor, crassly uses Naz’s own defense — that he simply “woke up” at a crime scene. As he stands outside of the precinct, in a clear recall from the pilot, Jack’s face crumples with weariness. Turturro masterfully conveys not just that what-have-I-done-with-my-life sadness, but a kind of resigned gallantry, as if to say, “oh, Hell, that poor kid.” So Jack endeavors to learn more about our murder victim, Andrea — even paying hundreds of dollars out of his own pocket to obtain copies of her medical files from an intake rehab facility, files he then gives to Naz’s current legal team, which leads to that wry levity between him and associate Chandra (Amara Karan), the only person who looks at his feet without mockery or disgust. She is as buttoned-up as he is fast and loose, and I’m hoping that, given the other major event of this episode, the show is maneuvering the two of them as Naz’s new legal defense counsel.

As Alison, Headly is a perfect mix of steeliness and sarcasm; the scene when she finally meets Naz at his bail hearing and bluntly tells off the other inmates who proposition her for representation (and, um, other things) is laugh-out-loud funny. But that steeliness is evidence of her fundamental certitude — she is always right, goddamn it, and is offended by any notion to the contrary, even if that notion is Naz’s father Salim wanting to speak at a press conference where Alison, a dandelion blonde, is decrying the racism that Naz and his family are suffering. She is so proud of the plea deal she’s negotiated for Naz that she ignores her own client’s wishes for an honest, vigorous defense; her explosion at him for not taking that deal, for standing up in front of the judge and all the officers of the court and insisting that he honestly, truly, doesn’t remember the night of Andrea’s murder, is a kind of inversion of her iron-jawed angel act in the holding area. It’s deeply chilling to see this arbiter of lily-whiteness tell Naz that, since he’s made the judge and prosecutor actually go to trial, they are going to want to kill him, and that, frankly, she wants to kill him herself.

Here, we see “The Night Of” go deeper into issues of race as they play out across our consciousness—from screaming headlines (and Nancy Grace shrieking on a bar-room TV set) and veiled references to Naz’s “foreign ties” to the inner ugliness of a nice white liberal who can talk the talk when the cameras are flashing but who, at the end of the day, sees her client not as a terrified young man fighting for his life but just another career-making case. Only Chandra, the Indian associate who Alison brings into the case for optics alone, tells Naz to speak his truth. Amara Khan brings a mix of calm pragmatism and compassion to her scenes with Riz Ahmed. We get a sense that, in simply listening to him, she is smoothing a balm over the scabbed-over, already-scarring parts of his mind and heart.

The show is doing some rich work in interrogating racial dynamics, but until we really get to see Chandra working the case and mounting Naz’s defense, it’s still somewhat lacking in the ways it represents gender. Hopefully, the show will use Jack’s pilfering of Andrea’s medical files as an example of how we fixate on the ideal of the perfect victim — and how anyone who falls from that ideal is seen as somehow “asking for it.” Right now, though, it feels a bit slight, or like the show may pick a deus ex actual killer from a rogue’s gallery in Andrea’s checkered past. This would be disappointing because, right now, the show is so adroit at parsing out the complexities even in its smaller characters, like the con who initially befriends Naz at Riker’s Island, regaling him with stories of his murdered niece. The man’s mourning and rage are palpable; a few brief lines conjure a real girl who was truly loved and missed. And even though this character is likely toast—he is, after all, the one who weaponizes that baby oil and throws it on Naz, displacing his anger at his niece’s killer—he feels wholly present in ways that Andrea, whose death is the axis upon which the series spins, does not.

This small character’s inevitable (and inevitably very painful) ending signifies the largest, most heartbreaking (if necessary) change for Naz—who decides to accept Freddy’s protection, even if that protection is manifest in spectacularly savage ways, and even if Freddy’s tutelage may lead to him becoming more of a hardened criminal himself. Riz Ahmed continues to sell this transformation as a slow burn, one that, like that incinerated mattress, has sizzled and crackled, until, finally, it erupts into something terrifying, and only barely containable. Here, and in the image of that ruined mattress, the show announces its real intent: to show the smoldering of a young man’s spirit.