Trying to get pregnant? Trying not to? This wearable fertility tech could change your sex life 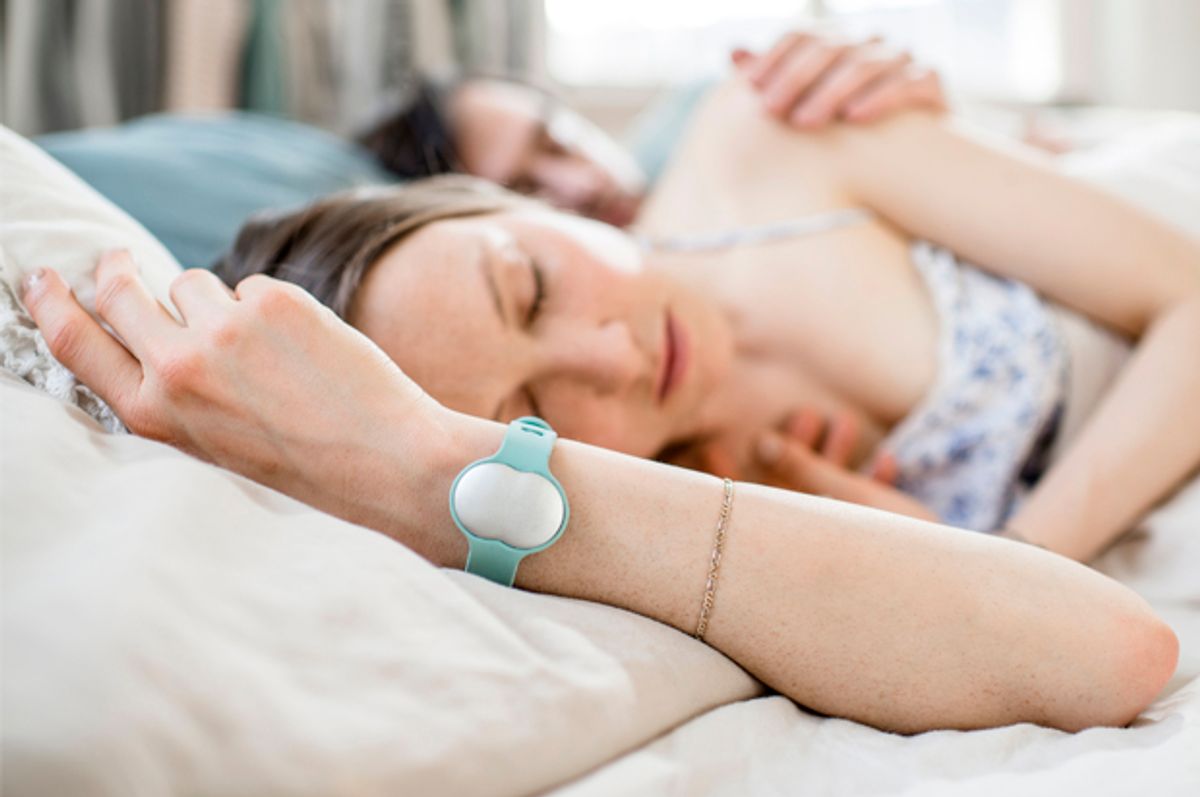 It’s easy to buy into this “happily ever after” fantasy — guy meets girl; they flirt, they court, they kiss. From childhood we hear the familiar refrain of “first comes love, then comes marriage,” but what happens if a much-wanted baby carriage doesn’t follow?

The National Center for Health Statistics found general fertility in the U.S. was at an all-time low in 2013, and the CDC reports 1.5 million women (about 6 percent) in the country are infertile. It’s a complicated and frustrating topic for couples and single women trying to conceive.

“Most women are ill-informed of the natural processes of fertility,” says Dr. John Jain, a Board-certified reproductive endocrinologist and pioneer in the field of reproductive medicine at Santa Monica Fertility. “Women don’t know which days they can get pregnant, and another issue is timing intercourse.”

Knowing exactly when to have procreative sex in order to maximize the potential for pregnancy is key when merely putting away the birth control doesn’t work. Scheduling and other fertility tracking methods can take the romance right out of sex. Common practices like using a thermometer to track a woman’s temperature, which rises slightly during ovulation, and urine tests aren’t particularly sexy or convenient, even with, for example, the newest ovulation thermometers.

Enter Ava, the first wearable fertility tracker designed for women. The product, which looks similar to the Apple Watch, is the first (and currently only) FDA-approved medical device for ovulation detection. It allows women to track their cycles, and doesn’t require a prescription or trip to the doctor. The wearable product uses sensors that measure nine different biological parameters: pulse rate, breathing rate, sleep quality, movement, heart rate variability, skin temperature, heat loss, perfusion and bioimpedance (body composition), in order to determine a woman’s 5-day fertile window and ovulation with 89 percent accuracy. This means couples trying to conceive can plan a romantic weekend accordingly, rather than make a frantic phone call and rush to have sex at the last minute. Conversely, a woman who doesn’t wish to get pregnant can track her fertile window and know on which days to abstain or to use additional forms of contraception.

Salon spoke with Ava CEO and co-founder Lea Von Bidder, who believes the technology behind the bracelet to be the biggest reproductive innovation since the pill because it provides women with unprecedented data about their bodies in a non-invasive way.

Tell me how the initial idea for this bracelet came about.

We wanted to create a convenient and accurate method for women to track their menstrual cycle when they’re trying to get pregnant. Ava is a wrist-wearable you wear at night — and only during the night — that uses novel technology to detect the very beginning of the fertile window and also ovulation.

How does the data it collects work?

The wearable collects 3 million data points while a woman sleeps. She puts it on before bed, and all night, physiological parameters are measured. In the morning she can sync the bracelet to the app on her phone, which will then provide a chart of all the information that was collected.

How will this help women understand their bodies more effectively?

Every woman has really fertile days during her cycle. 70 percent percent of pregnancies happen during the three days when a woman is most fertile, which is when chances of getting pregnancy are the highest. [Then] there are three more days that can be considered “high fertile,” which makes a total of six fertile days out of the entire menstrual cycle. The issue is that this window can vary quite a bit. One cycle can be different from the next or others before them. If you’re trying to get pregnant, it’s super-critical that you time it properly.

Traditional fertility trackers include 19th-century methods like temperature monitoring or 20th-century urine tests to help detect LH (luteinizing hormone) levels, none of which are sexy or romantic. I’m sure couples find it tedious, and quite frankly super unsexy, to use these methods and then hop into bed.

Unfortunately for many couples, trying to get pregnant can be a really stressful and really frustrating period of time in their lives, because month after month it doesn’t work out. So gaining whatever tools you can to improve your chances of getting pregnant is a huge stress relief. The problem with the temperature method is it doesn’t give any sort of advance warning that a woman is about to begin her fertile window because it lets you know only when ovulation occurs. Even if you get up every morning and take your temperature, it doesn’t give you any information for the cycle you’re in, only information for possibly the next cycle — but the thing is, almost no women have completely regular cycles.

LH levels can be detected through urine tests a few days before ovulation, which usually work because they give you more time. The problem is that they’re urine tests. Women in our beta studies told me they had to sneak out of work meetings and go take their urine tests in the bathroom, and then wait for the results that can take up to five minutes. Urine tests lead to those Hollywood situations where it’s like “Honey, you can’t watch the game because we have to do this right now!”

These methods were really old-school and really inconvenient. We wanted to give couples more time to plan a romantic weekend with their partner, versus having to rush home and just get it done.

Research on women’s health still seems almost a taboo subject, and this seems to be a step toward more open conversations concerning women’s health.

There’s a huge gap in the research when it comes to women’s health. With Ava, we started looking at that in more detail. My co-founder’s wife was trying to get pregnant and started looking at what was out there to help. We knew that temperature and hormone levels were changing during ovulation and the fertile window, so we thought maybe other things would also be changing.

We knew the physiological changes that happen when a woman is about to start her cycle (hair, skin, mood), so we wanted to use that to help detect when the window of fertility would occur. We did a year-long clinical study to show we can measure nine different physiological parameters to detect these changes in a woman’s body.

You mentioned the scenario of a woman at the office sneaking away to take a urine test. I can imagine how embarrassing and vulnerable this might be, it seems like it could almost be perceived as a sign of weakness in the workforce, which is unnecessary. We shouldn’t be made to feel shamed about our bodies or desire to have children.

Unfortunately today it’s still not that acceptable to show the world a woman is trying to get pregnant. I hope one day we’ll get to the point where it’s socially acceptable. We’ve seen a lot of interest from women in their 20s who don’t necessarily want to get pregnant, but want to know more about their bodies. I hope it goes in the direction where women use this in order to learn more about their bodies.