Calling all "chicks with picks": How I climbed my way out of fear, one icy step at a time

As adults, we’re taught to minimize the level of risk in our lives — but this is when we need it the most 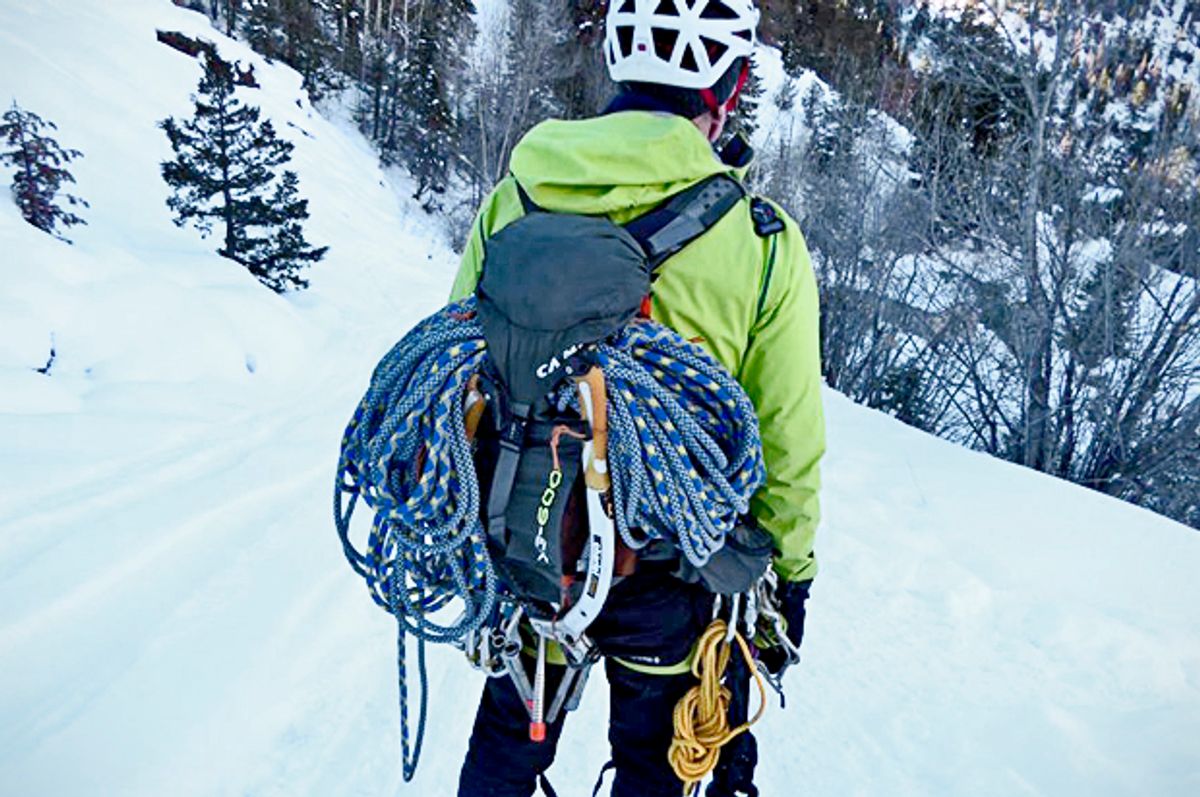 I step hesitantly across the catwalk, trying not to glance into the ice-coated gorge gaping beneath. My steps are wobbly, partly because of the mountaineering boots, but more due to terror. I’m offered a rope to secure to my climbing harness in case I’m worried about falling as we descend a narrow iron ladder deep into the yawning cavern.

Sweat drenches my woolen undershirt. The inch-long barbed crampons clamped to my boots make balancing on the ladder rungs precarious. I hold onto the railing with knotted fingers, trying to avoid glancing at the jagged rocks and ice below. Eventually, I clomp and grapple and clench my way deep into the canyon.

I’m in Southwest Colorado at the fabled Ouray Ice Park, taking a novice all-women’s ice climbing clinic run taught by a group called “Chicks with Picks.” As someone who’s terrified of heights, this may seem a foolhardy choice.

But it’s not. The truth is, I’m a "chick" all right, but more of the "chicken" variety. Heights, loud noises, crowds, traffic, and earthquakes make me woozy. I fret about aging, career impasses, my young adult children, global warming, my 401K, and the possibility of dementia. This list of what makes me clammy with terror is never-ending — and growing.

And that’s the problem I’m here, learning to climb ice, to address. For most of my life, fear has ruled me. What will happen if I lose my job? How will I manage as a single woman if my 25-year marriage ends? When I listen to the fear, it multiplies like germs in a petri dish, taking over everything until it eventually frightens me into a full-scale retreat from life. I have to fight back. So I try to cajole myself into taking contrary action.

This attitude goes against everything I thought I knew. We should avoid excess risk as we age, I was told. After all, in our 40s it takes longer to heal a knee damaged learning to snowboard than in our 20s. Pursuing a new educational direction in later life to change careers or for the simple joy of learning something we’re hungering to know squanders our time and resources. If we’re too ambitious with our investments in our 50s, we might not be able to recoup the loss before retirement. And those who leave long-term marriages in the hopes of living a more authentic experience are simply crazy. There’s too much to lose.

I believed these directives until a few years ago when I found myself at a crossroads. My last remaining parent was dying, my kids were leaving home, and that long-term marriage was coming to an end. When I looked in the mirror, I no longer saw the young woman I’d once been. Though she hadn’t been exactly fearless, she had been full of optimism and courage in the face of the unknown, qualities I had lost.

I wanted her back, but I didn’t know how.

Then, on a fluke, I took a motorcycle safety class as research for a book I was writing and surprised myself with the intensity of feeling that rose up from the deepest part of me. Sitting astride that brawny machine brought into question everything I thought I knew about who I was and the options I faced. I was shocked and then awed as I faced down my fear on an iron beast that outweighed me four to one. The parts of my soul that had shriveled up and almost disappeared slowly began to flower again. I became reacquainted with the young woman I’d once been and had nearly lost in my pursuit of a protected and predictable life.

Two months later, the day after my father died, I went to my local Harley dealer and bought a matte black motorcycle. And thus began my process of demolishing that "safe" life through a series of choices that made other people scratch their heads. I left the marriage, learned to rock climb and ski, rode my motorcycle across the country and back, moved to French Polynesia, took up SCUBA diving, and began to date — all in progressing middle age. I had a big, messy midlife crisis, visible to all around me and loud, too, thanks to the motorcycle pipes. I became the cautionary tale in the suburban neighborhood where I lived.

But I felt more alive than I had in years.

Friends are quick to caution you about all the ways risk can hurt you and steal what you’ve worked so hard to gain. But no one told me about the slow death that ensues if you don’t put your genuine, tender-at-the-bone self on the line. Like a frog in a pot of slowly heated water, my essence was being sapped away — and I was oblivious. My failure to take action, to embrace risk, was destroying the very parts of me that were the most precious.

Our society propagates a soul-crushing falsehood. We believe that risk is by definition something unwanted, to be eradicated whenever possible, especially in midlife when there’s less time to fix whatever we might mess up. But that’s the exact time we need it most, when all our demographic markers have been set in place – mother, wife, professor, homeowner -- when we think we can no longer surprise ourselves, when we believe we know how the story ends.

Neuroscientists, researchers, and psychologists helped me see that risk, the very factor I’d long avoided, was the tonic that made me feel healthier emotionally. As a result of my risk taking, my libido sparked. I encouraged the phenomena of neuroplasticity and neurogenesis within my own brain, and my self-confidence skyrocketed. By deliberately engaging new situations — even as simple as taking a bicycle instead of my car to work, trying a new place to eat, or changing up my fitness regime — my happiness improves and I bolster my mental and physical health. It’s no surprise that women are less likely to engage risk than their male counterparts, yet we may benefit even more from taking a chance.

By training myself to take small risks and building on them daily, I am slowly turning my emotional state away from what scares me toward what makes me feel most alive. That’s not to say that fear retracts its claws and leaves me in peace. I still have to wrestle it, but in doing so, I rediscover my eagerness, perseverance, and even a little taste of audacity.

Standing now, at the bottom of this ice-choked chasm, I realize I haven’t even begun the ostensibly scary part of today’s plan: reaching high to swing my ice axes and kicking the front points of my crampons to climb the ice. But the fact that I’ve made it this far makes me ecstatic. I stared down this one fear on this one occasion. Whether I distinguish myself as a novice female climber today doesn’t matter. I took on an activity that once panicked me and now I feel euphoric. The next time I choose to climb down a ladder like this, it will be easier. The next time I encounter a catwalk overlooking a gorge, I’ll be one degree less scared than I was today. The next time life hands me difficulties that feel insurmountable, I’ll remind myself of how I once triumphed when asked to descend a frozen canyon.

And later today, after I survive the ice climbing challenge and the self-inflicted wound above my right eye from where I will bash myself with my ice pick, I’ll pull off my helmet and sunglasses. I’ll look into the mirror. And there I’ll find my true self, the self I thought I lost, looking a little rough with a stain of blood and bruising along her eyebrow. There she is, stronger than she thought she was, grinning back at me.

Bernadette Murphy is the author of "Harley and Me: Embracing Risk on the Road to a More Authentic Life" (Counterpoint Press, May 2016). She has published three previous books of narrative nonfiction including the bestselling "Zen and the Art of Knitting," is an Associate Professor in the Creative Writing Department of Antioch University Los Angeles, and a former weekly book critic for the Los Angeles Times. Her website is Bernadette-Murphy.com.