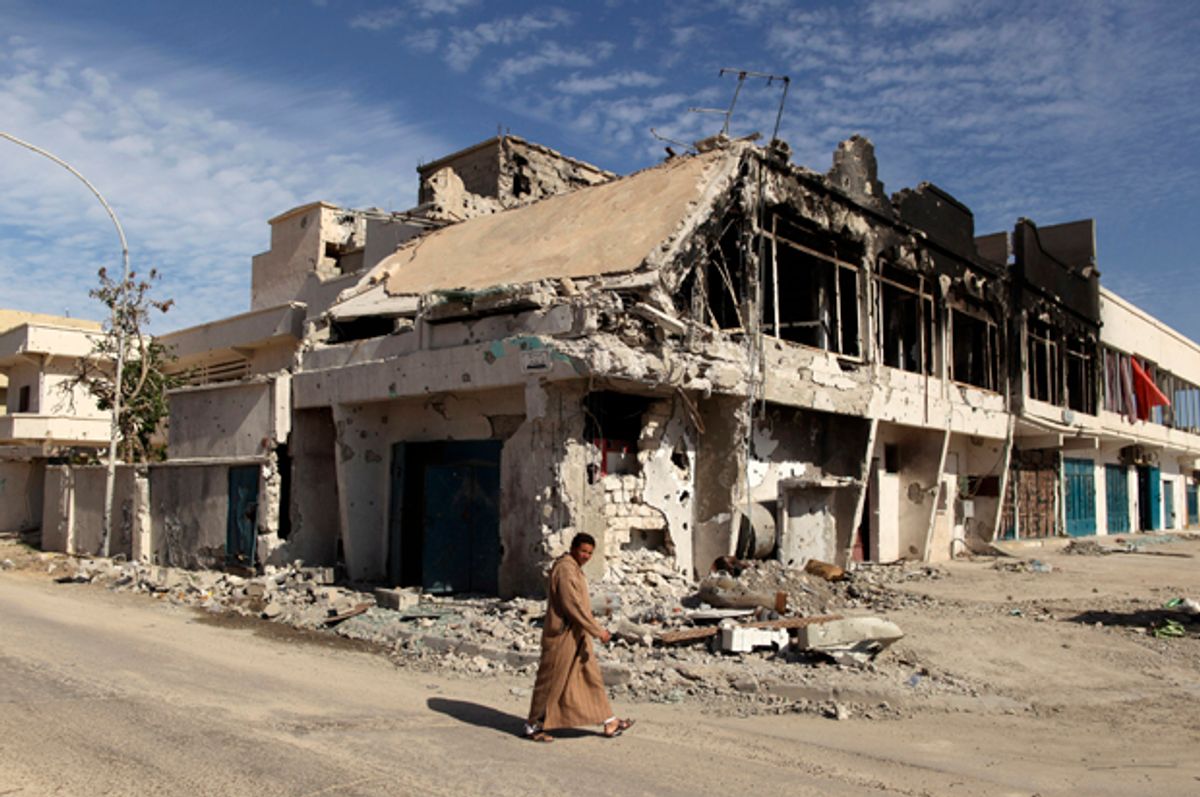 A house which was destroyed during fighting between pro and anti-Gaddafi fighters in Sirt, Libya November 19, 2011. (Reuters/Mohammed Salem)
--

This makes Libya the seventh Muslim-majority country the U.S. is presently bombing.

The air strikes are meant to target ISIS, which in Libya has carved out its largest territory outside of Iraq and Syria. It was the U.S.-backed 2011 NATO war in Libya that destabilized the country in the first place, however, empowering extremist groups and allowing the self-proclaimed Islamic State to take hold in the oil-rich North African nation.

Pentagon Press Secretary Peter Cook said in a press briefing on Monday that the U.S. is carrying out precision airstrikes on ISIS targets in Sirte, a northern coastal city that has become the extremist group's Libyan stronghold.

Cook said the strikes were requested by Libya's interim government, the Government of National Accord, or GNA. They were authorized by Obama after recommendations by Secretary of Defense Ash Carter. Cook noted that the request and approval were made "in recent days."

Libyan Prime Minster Fayez Seraj said on state TV that "these operations are limited to a specific timetable and do not exceed Sirte and its suburbs," Reuters reported. But the Pentagon has suggested otherwise.

"We don't have an end point at this particular point of time," a Pentagon spokesperson acknowledged, according to Council of Foreign Relations senior fellow Micah Zenko.

The legal authority for the open-ended airstrikes in Libya, according to a Pentagon spokesperson, comes from the Bush-era Authorization of the Use of Military Force, which was passed by Congress on Sept. 14, 2001, Zenko reported.

In 2015, the Obama administration dropped 23,144 bombs on the other six countries.

In Iraq and Syria, the U.S. is bombing ISIS targets, which emerged out of the catastrophic U.S. war in Iraq and the ongoing war in Syria.

The war in Afghanistan is one of the longest conventional wars in U.S. history. Violence, displacement and hunger are on the rise in the country as the Obama administration has extended the war for a third time.

For years, the U.S. has also been carrying out drone strikes in Yemen, Pakistan and Somalia. In July, the Obama administration released a report claiming that just 64 to 116 civilians were killed in its secretive drone program. Experts and watchdog groups say the number is significantly higher.

The new bombing campaign in Libya has been coming for some time. In February, Sen. Bob Corker, the chairman of the Senate Foreign Relations Committee, said the Obama administration was “on the verge of taking action” in the country.

That same month, the U.S. carried out airstrikes on an ISIS-controlled area in western Libya, killing two Serbian embassy workers who had been held hostage by the extremist group. The Serbian government had been working on securing their release.

In May, the U.S. also acknowledged that it had dozens of special operations forces working on the ground in Libya. "It is unclear what precisely the U.S. Special Forces' scope of operations is in Libya," CNN reported.

NATO's 2011 war in Libya, which was justified on humanitarian grounds but was clearly about regime change from the beginning, not only removed dictator Muammar Qaddafi; it also toppled the government and destabilized the country.

Then-Secretary of State Hillary Clinton played a leading role in pushing for the war. President Obama called it the decision he most regrets, but Clinton is still proud of her role.

Since 2011, the country has been engulfed in a bloody civil war. Thousands have been killed, and many more have fled the country in search of asylum – although NATO has planned to impose a blockade on Libya to prevent refugees from entering Europe, in what experts say is a violation of international law.

Extremist groups like ISIS and Ansar al-Sharia took advantage of the chaos and seized large swaths of territory. The so-called Islamic State has implemented a reign of terror in Sirte, the city of Qaddafi's birth.

The war against Qaddafi helped fuel these extremist elements. During the war, U.S. arms shipments to Libyan rebels ended up in the hands of Islamist extremists. And, after the government was overthrown, weapons from Qaddafi's massive troves circulated through North Africa and the Middle East.

Rebels also killed black Libyans, whom they accused of supporting Qaddafi. Rebels reportedly put black Libyans into cages and forced them to eat flags, and ethnically cleansed the town of Tawergha, whose inhabitants were mostly descendants of black slaves and were very poor.

Human Rights Watch reported in 2013 of “serious and ongoing human rights violations against inhabitants of the town of Tawergha, who are widely viewed as having supported Muammar Gaddafi.”

The human rights group said militant groups carried out “forced displacement of roughly 40,000 people, arbitrary detentions, torture, and killings are widespread, systematic, and sufficiently organized to be crimes against humanity.”

Experts have warned that a new war in Libya will do little to stop the problems that were created by the first bombing campaign.

In January, the editorial board of The New York Times, which supported the 2011 NATO war in Libya, warned that a “significant escalation is being planned without a meaningful debate in Congress about the merits and risks of a military campaign that is expected to include airstrikes and raids by elite American troops.”

“That is deeply troubling,” the editorial board wrote. “A new military intervention in Libya would represent a significant progression of a war that could easily spread to other countries on the continent.”