The Salon author questionnaire: "The word 'nice' makes me break out in hives" 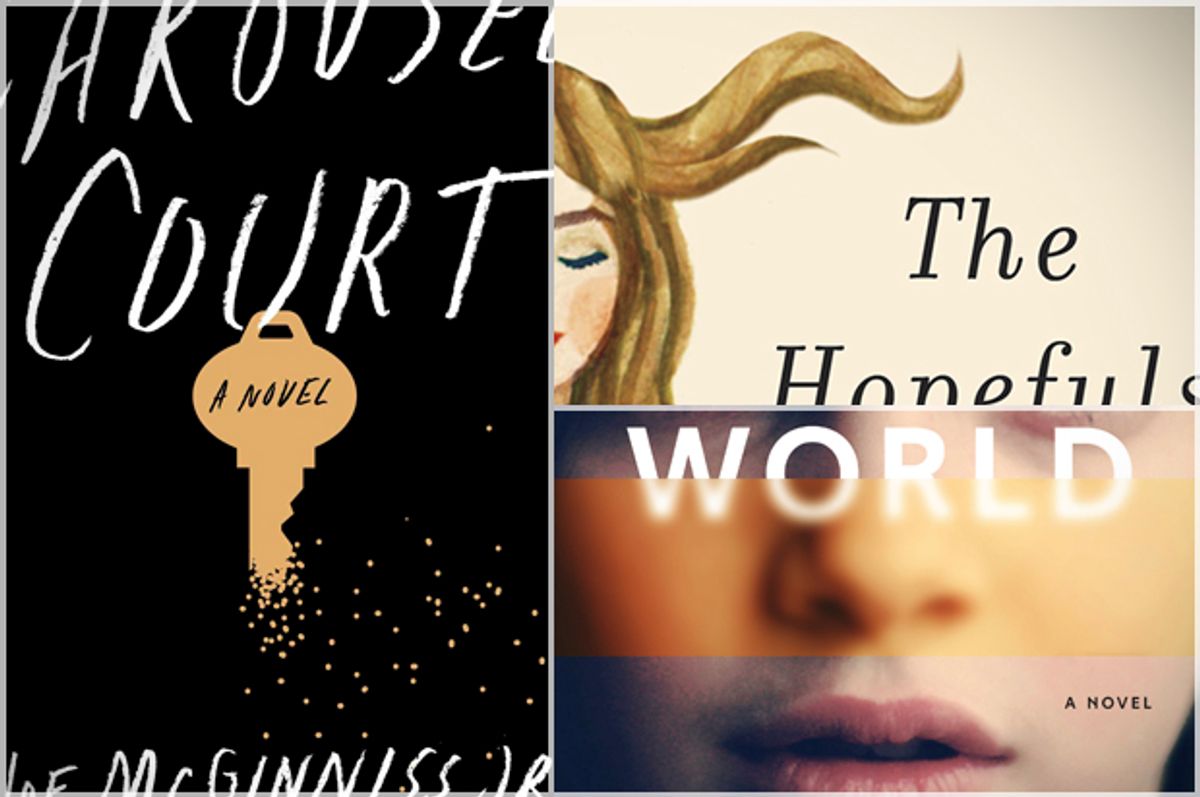 For August, I posed a series of questions — with, as always, a few verbal restrictions — to five authors with new books: Jennifer Close ("The Hopefuls"), Joe McGinniss Jr. ("Carousel Court"), Liz Moore ("The Unseen World"), Gina Ochsner ("The Hidden Letters of Velta B.") and Lara Vapnyar ("Still Here").

OCHSNER: What’s it about? What ISN’T it about! Eel-fishing, falling in love, how to make Latvian style pierogi, the Bear-Slayer myth, a boy with enormous furry ears, a graveyard with restless bodies, outrageous nationalism, ethnic tension, a ghost girl who lives in the river and with whom one should never under any circumstances go swimming, how to send a curse through the mail.

CLOSE: It’s about the friendship between two couples, both newcomers to Washington, DC. It’s also about marriage, ambition, politics, and jealousy.

MOORE: Joseph Weizenbaum's ELIZA chatbot, growing up in the Boston area in the 1980s and ‘90s, having a scientist father and a linguist mother.

MCGINNISS: Too many of my friends whose weddings I attended have since divorced or separated. Those who haven't have endured struggles as life pressures mount and inevitable tension rises between spouses. Having listened and counseled as best I could, (because I'm certainly no expert), a few friends through various rough marital patches, I learned firsthand what we all know: marriage is work. When money and professional issues arise, couples can and do certainly navigate such periods by coming together and facing the challenges together. Sometimes though, pressure exposes old wounds, finds the vulnerabilities in the relationship and hones in, testing the relationship in ways never imagined. Some pass the test. Many don't.

CLOSE: West Wing, Obama, political charisma, Washington DC, being an outsider, and the culture of competition.

MOORE: Teaching, getting married, teaching some more, learning Philadelphia, fixing up an old house, spending a year at the American Academy in Rome.

CLOSE: “Girl books” and “chick lit.” My problem with these terms isn’t that my audience is mostly women, it’s the negative and derogatory attitude that goes along with them, as if there’s something wrong with having women as readers. It’s the way people try to make you feel smaller, like you don’t matter as much by saying, “She writes girl books.”

VAPNYAR: That my immigrant characters complain too much. They have a roof over their head, they are not hungry. It’s ungrateful of them to be miserable.

MOORE: "Quirky" makes it into the cover of most of my books. It somehow feels too cute.

OCHSNER: The word “nice” makes me break out in hives. When someone tells me that they think my work is nice I want to take knitting needles and shove them in my ear canals. I have the same almost physical reaction to the word “interesting.” The word is vague enough to mean anything and nothing. Like nice, interesting means the reader had zero connection and zero emotional response to anything in the work.

MCGINNISS: Bleak. Dark. More than one reviewer used terminology around the idea of not knowing who to "root for." Or "likeability." Since when did reviewers/editors all become 11-year-olds when reacting to fiction. "Who should I root for?" Who did you root for in "Goodfellas?" In "The Sopranos?" In "Native Son?" "Revolutionary Road?" "Lolita?" "Affliction?" Some of the best stories I've ever read revolved around protagonists who did reprehensible things but were impossible to look away from, were so compelling for so many reasons — and that's a testament to the author/creator.

VAPNYAR: A spy. But I don’t want to kill people or steal secrets—that would be too stressful. I just want to quietly try out different identities.

CLOSE: Is it cheating to say that I’d want to work in book publicity? The publicity team at Knopf works really hard but they also make their job look fun. I think promoting a book that you love and getting it into the hands of people you know are going to love it just as much would be so satisfying.

OCHSNER: I’d like to be a volcanologist, ethnologist, photographer and painter.

MOORE: If you'd asked me this when I was ten I would have said professional soccer goalkeeper ("irrespective of talent" is key here). Now I think it would be great to host an hour-long radio interview program.

OCHSNER: I’m pretty good at fleshing out characters. I like to crawl inside their minds and imaginations and sort of loll about. Sticking to a clean narrative arc gives me some troubles. I’ve been told that I’m digressive and I’d have to agree. The odd anecdote that in no way relates to the “big idea” is just as illuminating and fascinating to me as anything else pertaining to the through-line.

MCGINNISS: Tone, pacing, dialogue. I admire and envy those who can write subtle, moving stories filled with emotional tension. And humor. I'd love to be able to write funny.

CLOSE: I love writing dialogue and I think I have a good ear for it. Writing funny also comes naturally to me. Pacing and plot can be a struggle and I work hard to improve that. At some point in my writing process there’s post its and papers taped all over the wall in an attempt to map everything out.

MOORE: Narrative voice often comes naturally to me but dialogue does not.

OCHSNER: I have a tremendously supportive family. But we’re also pranksters and jokers. Nobody gets through a family reunion unscathed. Birthday gatherings, for example, usually turn into impromptu roasts. At my last birthday the whole family gathered and after I’d blown out the candles on the cake, each person shared what they believed was the oddest quality about me or the most embarrassing thing they remember me doing. That will keep a girl humble! I should add that my school photos from 6th, 7th and 8th grade were also shared. If ever I think I’ve got something so important to say or share with the world that everyone else should sit up and take notice, I just remember who I really am: a pretty ordinary person who just happens to enjoy telling stories.

VAPNYAR: I said some things that were really important to me in this novel, and I just hope and pray that I find readers who would find them important as well.

CLOSE: I can honestly say that of all the things that I worry about with my writing and the publishing process (and there’s a lot), this one doesn’t bother me much. Being published has been a dream of mine for as long as I can remember and I’m just grateful and excited that people are able to read what I write.

MOORE: Denial, avoidance, refusal to discuss my books until they're galleys even with my closest loved ones, keeping a writing routine, general petulance.

MCGINNISS: It's just a book. Nobody reads anymore, right? The generation of the novel being an event or something that could reach people peaked in the '80s and early '90s, so we've been told. I reminded of that scene in "The Candidate" when the consultant played by Peter Boyle tells golden boy Senate candidate Bill McKay at the outset of his long-shot campaign, and I'm paraphrasing: "Say what you want" with a simple guarantee: "You lose." I already won, because I'm doing what I love. Writing what I want to read and having it validated by people whose judgment I value (my wife, agent, and editor, and of course, Kirkus), is everything. But the fact that is even the huge buzz books that fetch seven-figure deals may still miss and those that do you can count on one hand. Show me a novelist with an ego and—wait, actually, don't. I'd rather sort through the clean laundry basket trying to find matches for my son's socks than spend time with writers with high opinions of themselves. (They're usually the ones who read for at least 30 minutes or more at their readings or inform the audience which # city they are on their 17-city tour. Or Tweet about "touring" We're not rock stars. Btw...I'll be appearing in the following cities...)