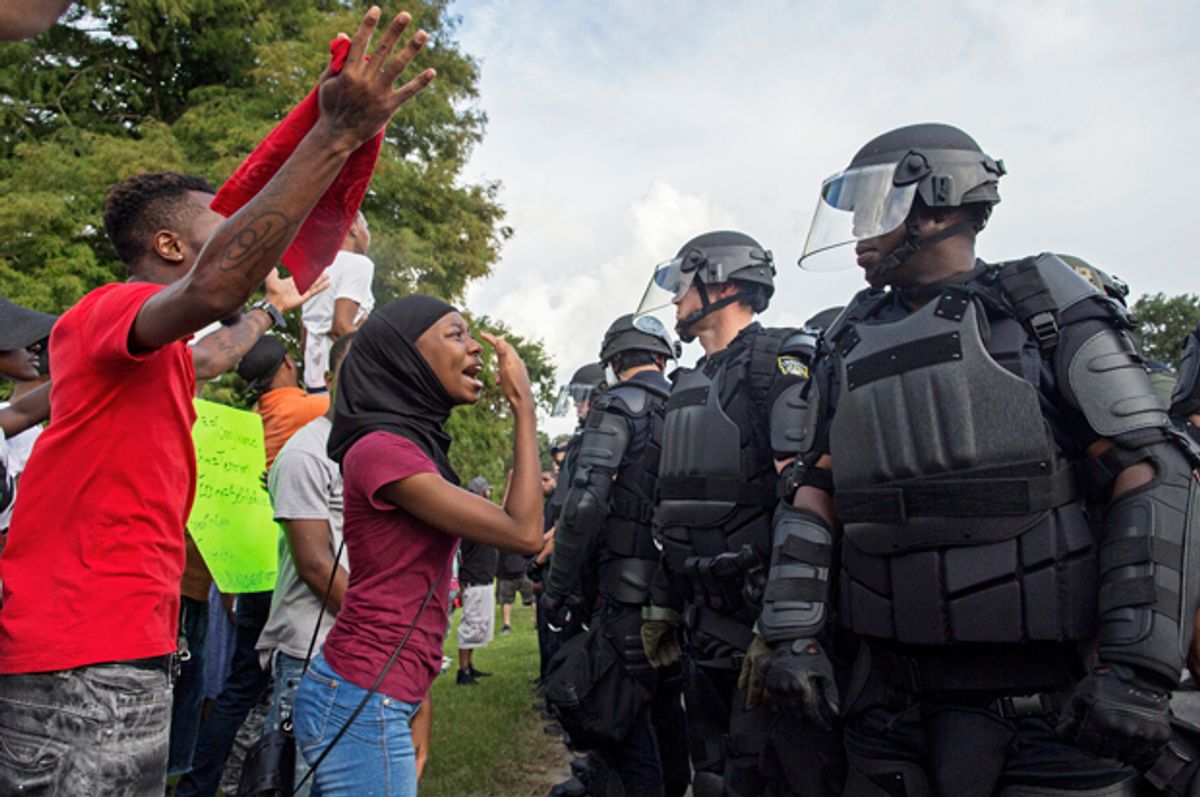 On July 17, three policemen were killed in Baton Rouge. This followed the death of five policemen two weeks before in Dallas. Both attacks led to calls for “Blue Lives Matter” bills that would make attacking a police officer a hate crime. Politicians like Donald Trump and various state legislators are advocating for protecting police, and saying that they are the ones under attack.

In his acceptance speech at the RNC, Trump claimed, “The number of police officers killed in the line of duty has risen by almost 50% compared to this point last year.” The actual increase: 5 deaths, or 8%.

Police officer deaths from guns are at a historic low. In 2015, 42 cops were killed by firearms, compared to the peak in the 1970s, when an average of 127 officers were killed annually by guns. In 17 states, no police officers were killed, either from guns or traffic. These bills are intended to protect lives, but what they actually do is further “the dishonest narrative that police are under attack,” according to Katrina Rogers, the communications director for Black Youth Project 100’s New Orleans chapter.

Further fueling this rhetoric, legislators in Kentucky, Wisconsin and Tennessee have already proposed or are considering proposing such laws. These, if passed, would join an existing Louisiana law — passed in May, going into effect in August — and a national bill introduced in the House that seems to have stalled in committee in April.

Undeniably, any death is and should be considered a tragedy, and no one, including police officers, should feel unsafe while doing their job. But according to activists, there are reasons why these bills don’t make sense: they undermine what a hate crime is and further inflame tensions.

Hate crime laws are intended to give further protections to those who are attacked because of their religion, race or sexual orientation — people who have been historically targeted or disenfranchised, which usually translates to minority groups.

“Police are an already protected class,” Rogers said. “This law was introduced as a way of pushing a dishonest narrative that police officers are under attack.”

Furthermore, some advocacy groups, like the Anti-Defamation League, worry that Blue Lives Matter bills would also obscure what a hate crime was intended to protect.

“Hate crimes are designed to protect people’s most precious identity categories — their ‘immutable characteristics,’” Allison Padilla-Goodman, the regional director for the Anti-Defamation League chapter in New Orleans said in a statement released before the bill passed. “Adding professional categories to the current hate crimes statute deters efforts from protecting against identity-based crimes.” Essentially, a black life is always a black life, but a blue life is not always blue.

The Black Youth Project 100 released a statement before the Louisiana bill had been signed into law. “The ‘Blue Lives Matter’ bill is an insidious attempt to destabilize our First Amendment rights as community members who hold the police, and others sworn by oath to serve and protect, accountable,” they said. “Police forces operate with impunity in our state and do not need additional protections. We, the people, need protection from the police.”

The Louisiana law went into effect this month, and considering the scope of protests in Baton Rouge, the First Amendment violations that BYP100 was worried about do not seem far-fetched, given that a couple of weeks ago police officers made what seems to be a concerted effort to prevent the press from reporting what was happening.

Louisiana's expanded hate crime law makes prosecution of protesters even easier because the law also applies to the property of the protected groups (the original law included property largely to protect churches and other religious institutions). Since the law is now expanded to include law enforcement officers as a protected group, the state could pursue hate crime charges against any individual that causes damage to police department property, conceivably including squad cars or even gear a police officer is wearing.

In short, these laws make it even easier to prosecute someone for allegedly harming a police officer if there was no actual assault, and by creating a narrative that the police are the ones under attack, the laws reinforce fears that officers are in danger of killed on the job at a time when actual line-of-service deaths are at a historic low.

As it is, in altercations like the ones we’ve seen in Ferguson and Staten Island and Baltimore and Baton Rouge, and now Minneapolis, the benefit of the doubt is almost always given to police officers.

“This bill is responding to an issue that does not exist while planting seeds of distrust,” Rogers said. “Spreading a dishonest narrative that police are under attack helps fuel these situations where instead of de-escalation, people are being senselessly killed.”