Jill Stein's anti-vax game: How and why the Green Party candidate is pandering to the anti-vaccination crowd

Jill Stein sows doubt and fears about vaccinations, and the supposed Snopes debunking did nothing of the sort 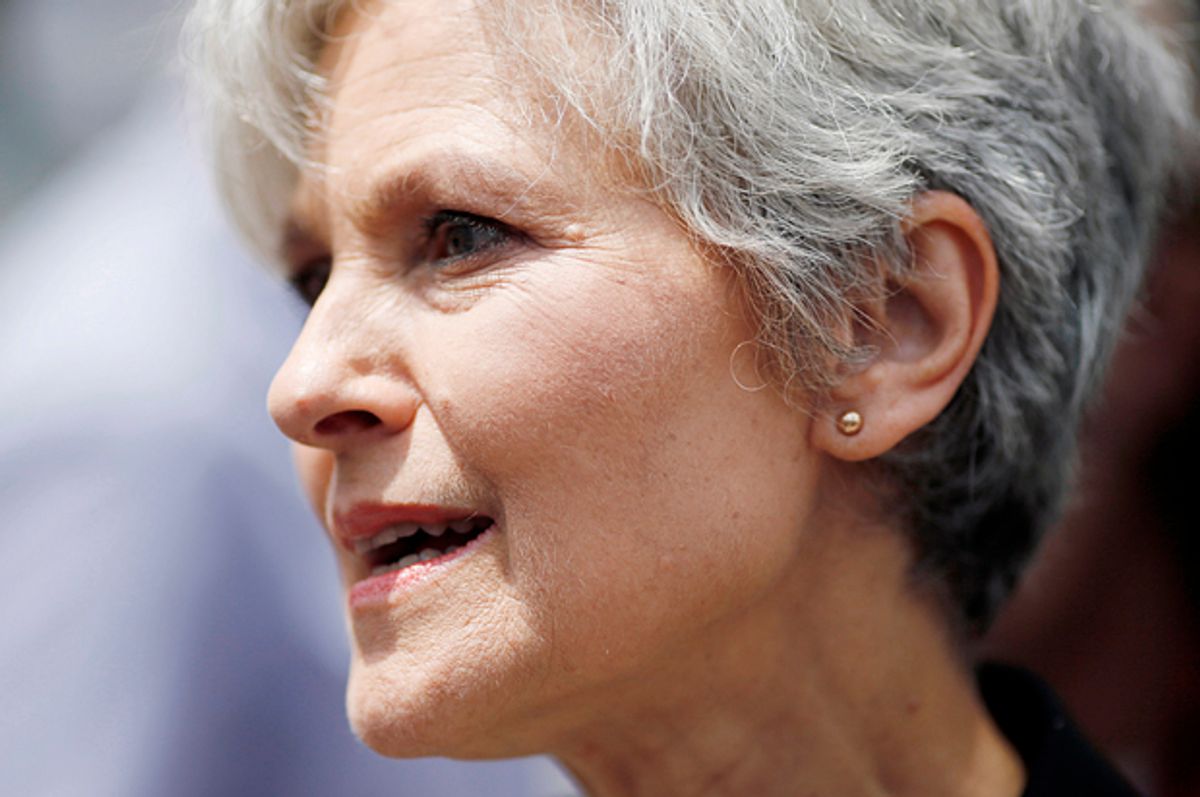 A couple of days ago, I tweeted a Vox article headlined, "Hillary Clinton is now the only candidate not pandering to the anti-vaccine movement." The article covers Donald Trump, as well as third party candidates Gary Johnson and Jill Stein.

Stein is of particular interest, since she's gunning to chip votes off Hillary Clinton. (Bernie Sanders was also unequivocal in his support for childhood vaccination.) Also, she is a doctor, which adds a veneer of authority to her sly attempts to wink at anti-vaccination fanatics, by saying things like, "I don’t know if all [questions about vaccines] have been addressed" or insinuating that the FDA's approval process is corrupt.

But as soon as I posted the link, some dude was telling me that Snopes, the venerable urban legend fact-checking site, had "debunked this particular lie."  My eyes rolled at the paranoid phrasing, but I  checked out Snopes for such an article anyway.

Much to my consternation, the site had, for reasons that still don't make sense, gone there. Writer Kim LaCapria called the accusations "rumors" and flatly rated it as "false" to say Stein is anti-vaccination.

LaCapria only gets to this "false" rating by attacking a strawman. "Dr. Jill Stein's popularity surge during the Democratic National Convention led to rumors that she opposes the use of vaccines," is how her headline characterizes the reports.

LaCapria's argument echoes that made by the Stein campaign. "Dr. Jill Stein has repeatedly articulated her support for vaccinations in interviews and online," reads a press release the campaign sent me to. "The conspiracy theory that Dr. Stein is 'anti-science' is becoming a bizarre new counterpart of the 'birther' controversy that hounded President Obama's candidacy in 2008."

"Dr. Stein uses a common anti-vaccine dodge in which she denies that she’s anti-vaccine, but then repeats anti-vaccine tropes about vaccines not being tested the same way as other drugs (if anything, they’re tested more rigorously), corruption in big pharma, etc.," David Gorski, a surgical oncologist and pro-science blogger explained to me. "She even walked back a Tweet from saying 'there’s no evidence' that vaccines cause autism to 'I’m not aware of evidence linking vaccines to autism.' Talk about an antivaccine dog whistle!"

Even LaCapria admits, in her Snopes article, that Stein's words "echo language used by vaccination opponents". But, for some reason, she didn't feel this very important caveat requires a more responsible Snopes rating.

Gorski issued a lengthy rebuttal to Snopes at his ScienceBlogs blog, which is recommended reading for anyone interested in the particulars of this debate. His criticism of LaCapria is that she takes "Dr. Stein’s denials at face value", while blowing off Stein's jabbering about the supposed corruption of the system or claims that we need "an agency that we can trust to sort through all of those concerns".

(For the record, we have two such agencies: The FDA and CDC. But of course, Stein insinuates they are corrupt. Why a third agency wouldn't receive the same insinuations is a mystery.)

Even in her supposed rebuttal to the accusations, Stein sows paranoia about vaccine regulation, by citing "the corrupting influence of the pharmaceutical industry in regulatory agencies and government in general".

"I think she’s anti-vaccine," Dr. Paul Offit, a distinguished pediatrician who serves as the director of the vaccine education center at the Children’s Hospital of Philadelphia, said of Stein in a phone interview. "My definition of anti-vaccine is that you put out information about vaccines that’s misleading, that you put out bad information. She’s done that."

Like Gorski, Offit's concerns centered on Stein's tendency to stoke unnecessary fears about the FDA and CDC.

"Pharmaceutical companies," Offit stated firmly, do not "make decisions for the FDA."

“They’re not at the table. They have no influence. They sit back and watch it happen. They hope for the best,” Offit added, “they have absolutely no influence in it. None. Zero.”

Stein's rhetoric serves to imply that we don't already have trustworthy agencies regulating vaccines. But, as Offit laid out, the government system for handling vaccinations is extremely thorough. First, the Vaccines and Related Biological Products Advisory Committee, an independent board run by the FDA, reviews the research on a new vaccination and makes recommendations. Once a vaccine is approved, the Advisory Committee on Immunization Practices, handled by the CDC, carefully reviews the research and issues guidelines on using the vaccine. After vaccines start being administered, they are tracked by the Vaccine Safety Datalink(VSD), to track if there are any problems.

It's unclear what adding another agency, as Stein seems to suggest doing, would accomplish. What would they regulate? The size of the needles?

Unlike other drugs, which tend to be taken for weeks or even years, vaccines are given only once, with a few requiring boosters, Offit pointed out. There's simply not enough money in it to justify this "vague notion we have that there are forces out there that mean to do us harm".

Offit pointed out that the number of companies making vaccines for American children has declined dramatically over the years, because there's so little money in it. (There's been a recent uptick in profitability, but that has more to do with the global market than market incentives in the U.S.)

It's no mystery what crowd Stein is pandering to with her just-asking-questions rhetoric: Well-heeled liberals  caught up in a modern mommy cult that sees reliance on technologies like pain relief in childbirth and vaccination — instead of relying on organic foods and mother love for medicine — as an indictment of one's parenting skills.

This probably explains the video that turned up of Stein pandering to a mother who told her she fears wifi signals are hurting children. In the video, recorded over the spring, Stein plays the same game she does with vaccines. She exactly doesn't say that wifi is causing disease. But she does sow fear all the same, saying, "we make guinea pigs out of whole populations and then we discover how many die."

"And this is the paradigm for how public health works in this country," Stein adds dramatically. And another round of stay-at-home moms decides to roll their kids up in organic bubblewrap and refuse to feed them gluten ever again.

In the past, mainstream Democrats have given into the temptation to suck up to the yuppie housewife crowd. In 2008, both Clinton and Barack Obama lightly pandered by issuing statements suggesting more research was needed on a vaccine-autism link. The claim was flatly false — the link had been thoroughly disproved — but the urge to pander clearly eroded their judgement.

"Here’s the difference," Gorski explained. "Neither of them bashed the FDA based on misinformation. Neither of them are physicians. More importantly, to my knowledge they both learned their lesson and haven’t equivocated about vaccines efficacy and safety since."

It's true: Both Clinton and Obama have dropped the ambiguous language in recent years, switching to unapologetic cheerleading.

"Too bad I can’t say the same thing about Jill Stein," Gorski said.