Just like '80s nerd heaven: The seductive nostalgia of "Stranger Things" — and my unexpected ambivalence

Netflix's supernatural show raids my childhood pop-culture loves, from D&D to E.T. — and I admit, I felt conflicted 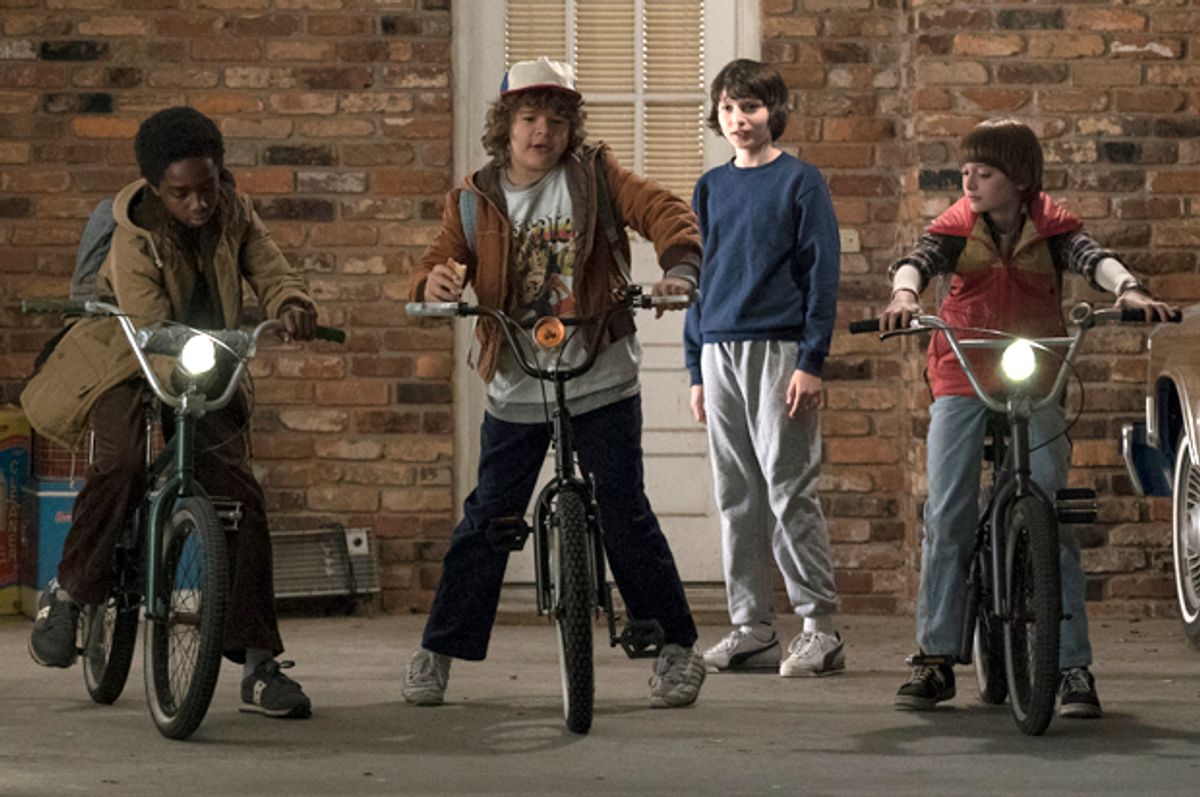 If you’re like me, then you’re nostalgic for your childhood, specifically the pop cultural detritus of movies, TV, and playthings from whatever era that recalls your younger days.

And if you’re a child of the 1970s and '80s, as I am, then you’ll be especially susceptible to the charms of “Stranger Things.”

Last month, the highly entertaining series hit the streaming and binge-watching portal of Netflix by storm. The storyline follows the fates of a quartet of nerdy, pre-teen boys, three of whom — Mike (played by Finn Wolfhard), Dustin (Gaten Matarazzo), Lucas (Caleb McLaughlin) — task themselves with solving the sudden disappearance of fourth, Will Byers (Noah Schnapp). An enigmatic girl with psionic powers named Eleven (played brilliantly by Millie Bobby Brown) becomes entangled with the trio. She helps the boys on their quest while, in parallel, other residents of the fictional small, Indiana town of Hawkins, including Will’s mother Joyce (Winona Ryder) and police chief Jim Hopper (David Harbour), get drawn into the intrigue.

The premise alone of this creepy, character-driven paranormal thriller should work, regardless of its Twin Peaks-ian setting. But the secret sauce of “Stranger Things” is its copious '80s references.

“Stranger Things” is set in an ancient time — the Reagan Administration. For me, my formative sweet spot. Naturally, part of me delights in the throwback lingua franca the series uses to speak to Gen Xers.

I was young teen myself in 1983, the year in which “Stranger Things” is set. I consumed much of the pop-culture that the show unabashedly name-drops. I watched the movies it echoes — “Close Encounters of the Third Kind,” “Poltergeist,” “Alien,” “The Thing” and “Red Dawn,” as well as John Hughes fare like “The Breakfast Club” and “Sixteen Candles.” I listened to the songs on the “Stranger Things” soundtrack, from The Clash’s "Should I Stay or Should I Go” and Toto’s “Africa” to Tangerine Dream's "Beach Scene" and “Atmosphere” by Joy Division. That classic music, plus the original synthesizer score by Kyle Dixon and Michael Stein (from the synthwave group Survive), sucker-punch me like an aural Proustian cookie.

Like our trio of nerdy protagonists, I rode around my woodsy neighborhood on a one-speed bike with a banana seat, and chattered with my pals on Realistic brand walkie-talkies. I played Dungeons & Dragons obsessively.

Heck, even the show’s title font recalls the book jacket designs of 1980s Stephen King novels. The show’s pastel-hued promo poster may as well be for “Adventures in Babysitting” or “Raiders of the Lost Ark.”

Everywhere you look and listen in this show, you can tune into the frequency of that retro vibe: kids with flashlights in the rain, mysterious vans, nefarious governmental scientists in hazmat suits hatching secret plots, poltergeists that stretch your bedroom wallpaper like a latex glove.

It’s a joyride to return to those cultural touchstones. Now that I'm approaching 50, at times I want to feel like I could be 12 again, embarking on a real-life adventure of consequence beyond the confines of my Dungeon Master screen (or MacBook Air screen).

Yet, my feelings are mixed. For every inward sigh at the boys’ excited jabbering about the “Demogorgon,” or smile at seeing Mom (Ryder) make a call on her canary-yellow rotary dial phone, or twinge of recognition as a jocks-versus-nerds schoolyard battle erupts (guess which side I was on?), I felt a poke of discomfort. Has “Stranger Things” raided, even exploited, the pop culture memories of my pre-adolescence? I feel torn, Gollum-like, over the insidious and wonderful lure of this show.

Cleverly, the series inserts as many props from the Cold War as possible: a Panasonic boombox, mix tapes on Memorex cassettes, Snack Pack canned chocolate pudding, manually developing black and white film shot on a Pentax SLR camera. Not only that, the plot itself mirrors many 1980s, boy-centered adventure films like “The Goonies,” “E.T. the Extra-Terrestrial” and “Stand By Me.” Those stories trafficked in an emotional landscape of mysterious aliens, government plots, and kids who outwit their inept parents and other adults. It was a kind of story pioneered by Steven Spielberg, whose “E.T.” is the genre’s Rosetta stone, and later revived by others like J.J. Abrams in films like “Super 8” and, to a lesser degree, David Green’s “Earth to Echo,” not to mention Ernest Cline’s novels “Ready Player One” and “Armada.” All offer powerful fantasies of empowerment and escape.

In “Stranger Things,” even the opening scene of Will’s first encounter with the paranormal force, which occurs in the shed behind his house — and I won’t reveal more than that — mimics the inciting incident in “E.T.,” when the D&D-playing Elliot first encounters the alien.

In fact, it’s because the young heroes of “Stranger Things” play D&D that they can consider that Will’s disappearance might be the result of fantastical, even irrational events. As I argue in a recent TEDx talk, analog storytelling tools like D&D can help you enter this imaginative, problem-solving, mind-opening head-space.

The show’s dive into the deep end of nostalgia is rich and complex, and, I admit, a brilliant tactic on the part of the filmmakers, twin brothers Matt and Ross Duffer. Because of the choice to evoke the 1980s, one might expect the writer-director Duffers to be from my generation — far into their forties, at least — but in fact they were born in 1984, a year after Will goes missing and Eleven shows up in Benny's Diner. “We're just nerds really, so we love all this stuff, really,” Ross said in a recent interview.

Yes, the “Stranger Things” creators pillaged my beloved ‘80s pop culture. But despite all the pointed shout-outs the Duffer Brothers crammed into the story, the series never feels like a soulless knock-off or a pointless nostalgia trip.

Forget my initial grumpiness. I truly love the show, and so should you. Yet I wonder if there’s more to its appeal.

Perhaps the Duffer Brothers didn't want to only create an homage to vintage pop culture. They've recreated a world when things were simpler (and yet at the same time, much more complex — see: "the upside down.") To create a story-space for Millennials to journey back to the pre-digital, tactile world before the Internet, before smartphones, Tinder and Pokémon Go. A time before helicopter parents over-scheduled their children’s lives, when “afterschool program” meant the freedom to ride your bike to a quarry or a junkyard and get into trouble, or just hang out with your buddies in the basement, scheming.

A time when one’s worldly knowledge might be confined to the D&D lore you could cram into a three-ringer binder.

Of course, the 1980s weren't all that simple. And in many ways my pre-teen and adolescent years were a total disaster. But I survived them. At least "Stranger Things" lets me go back and try a do-over. In 1982, The Clash asked "Should I Stay Or Should I Go?" If we’re talking about the 1980s, I say, we don't have to only stay here, in 2016. There are lessons to be found in New Order and Corey Hart's "Sunglasses at Night," in Dragon Magazine and “A Nightmare on Elm Street."