Saving lives with the minimum wage: A different way to think about an old policy fight 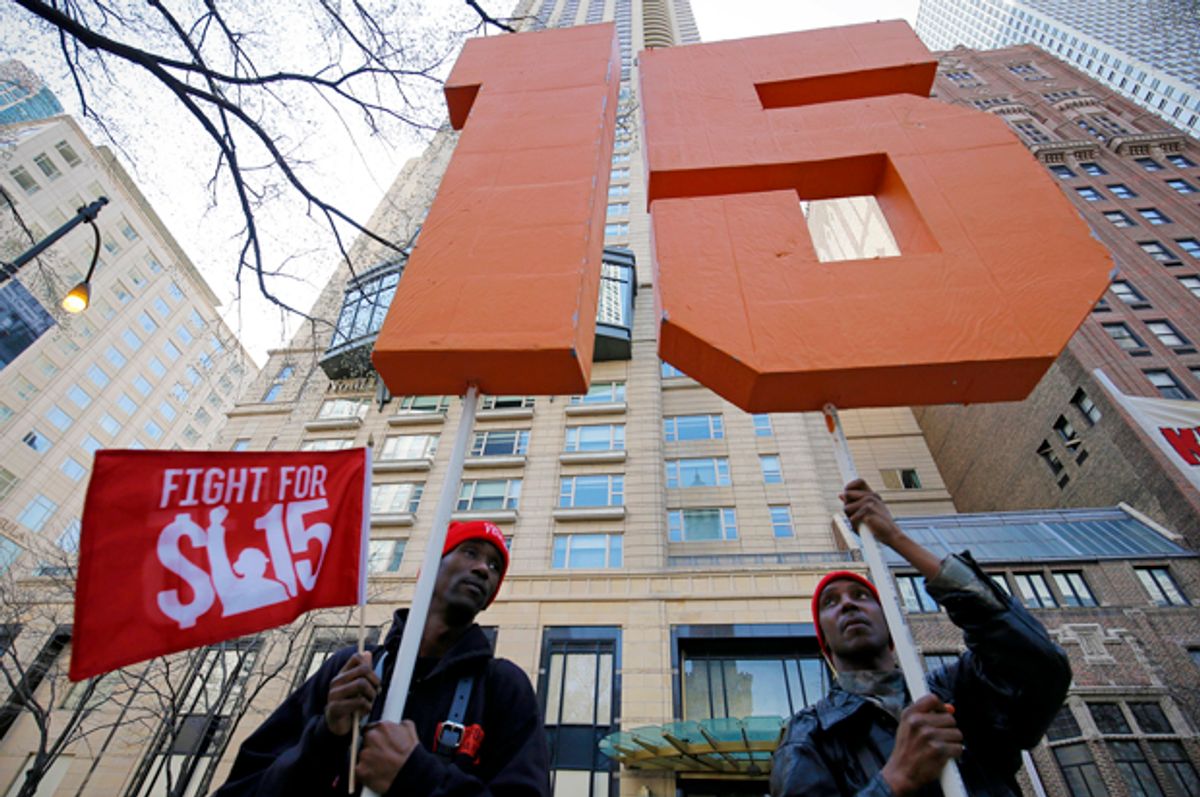 The political debate over increasing the federal minimum wage tends to focus exclusively on the economic effects that bumping up the current minimum of $7.25/hour would have on workers and businesses. That makes sense, given that the most immediate impact of altering the wage floor would be felt by workers in their bank accounts, and everybody likes getting a raise, so politicians who favor an increase talk primarily about how much more money low-wage workers will stand to earn. But by keeping the focus almost exclusively on the pocketbook, other potential benefits to bumping up wages go overlooked.

For example, there’s a growing body of research suggesting that when you raise the minimum wage, people die less.

This is the argument explored by J. Paul Leigh, a professor of Health Economics at UC Davis, in a recent editorial in the American Journal of Public Health. As Leigh points out, there’s a strengthening focus among researchers on the public health aspect of proposed minimum wage hikes. One recent study found that if every state in the country had bumped up its minimum wage by one dollar in 2014, “there would likely have been 2790 fewer low birth weight births and 518 fewer post-neonatal deaths for the year.” Another found that if New York City had had a $15 minimum wage between 2008 and 2012, as many as 5,500 premature deaths could have been avoided. Past studies have shown links between low wages and hypertension, and there’s evidence linking changes in the minimum wage to fluctuations in obesity levels.

If you pause to consider the logic behind the argument, it makes perfect sense: a higher minimum wage would provide low-wage workers better access to higher quality medical care that might otherwise be out of their reach. And, as Leigh writes, there are less direct impacts to consider as well: “Increasing wages can improve psychological well-being and job satisfaction, increase the opportunity cost of engaging in unhealthy habits, and expand the ability to delay gratification.” The relationship between income and health is well-documented and consistent across all income groups. “Middle-class Americans are healthier than those living in or near poverty, but they are less healthy than the upper class,” the Urban Institute noted in a 2015 report. “Even wealthy Americans are less healthy than those Americans with higher incomes.”

None of this is coming through at the national level when the minimum wage comes up for debate – the economic power of workers or the impacts on employers are often the only considerations. But public health advocacy has factored into state-level wage increase debates. Before Minnesota passed its minimum wage increase in 2014, the state’s Department of Health released its own report documenting the “strong relationship between income and health” and counseling lawmakers that “the association of lower income with poorer health suggests policies that contribute to increasing income levels, especially among the lowest income groups where improvements in health are most evident in this review, would be expected to have a positive impact on the health of these groups.” The department’s commissioner authored an op-ed recommending a minimum wage increase as “a sound public health investment for Minnesota, as the health of our lowest wage earners will improve along with that of their families and communities.”

It’s an interesting way of thinking about wage issues, and it offers politicians who support boosting the federal minimum wage – Hillary Clinton, for example – some new avenues for presenting their case. There’s an argument to be made that increased public health via higher wages will reduce stress – and government spending – on social welfare programs. The Center for American Progress released a report in 2014 advocating that states raise their minimum wages and adopt the Affordable Care Act’s Medicaid expansion as a means of boosting public health while reducing state-level spending. “This report finds that higher minimum wages lead to a statistically significant enrollment reduction in traditional Medicaid—that is, the portion of Medicaid for which states have always paid a substantial share of the cost,” it read. The CAP report found that states who did not expand Medicaid stood to save $25 billion over ten years by following this approach. “The minimum wage represents a low-cost, high-beneﬁt policy option to complement Medicaid expansion,” it concludes.

And, of course, a minimum wage debate that touches on public health has an explicitly moral aspect. It’s one thing to argue that boosting the minimum wage will improve the lives of low-income workers, and quite another to argue that it would save a number of them from an early grave.