Think the election will end on Nov. 8? You're so wrong — Trump and his backers will certainly contest the "rigged" results 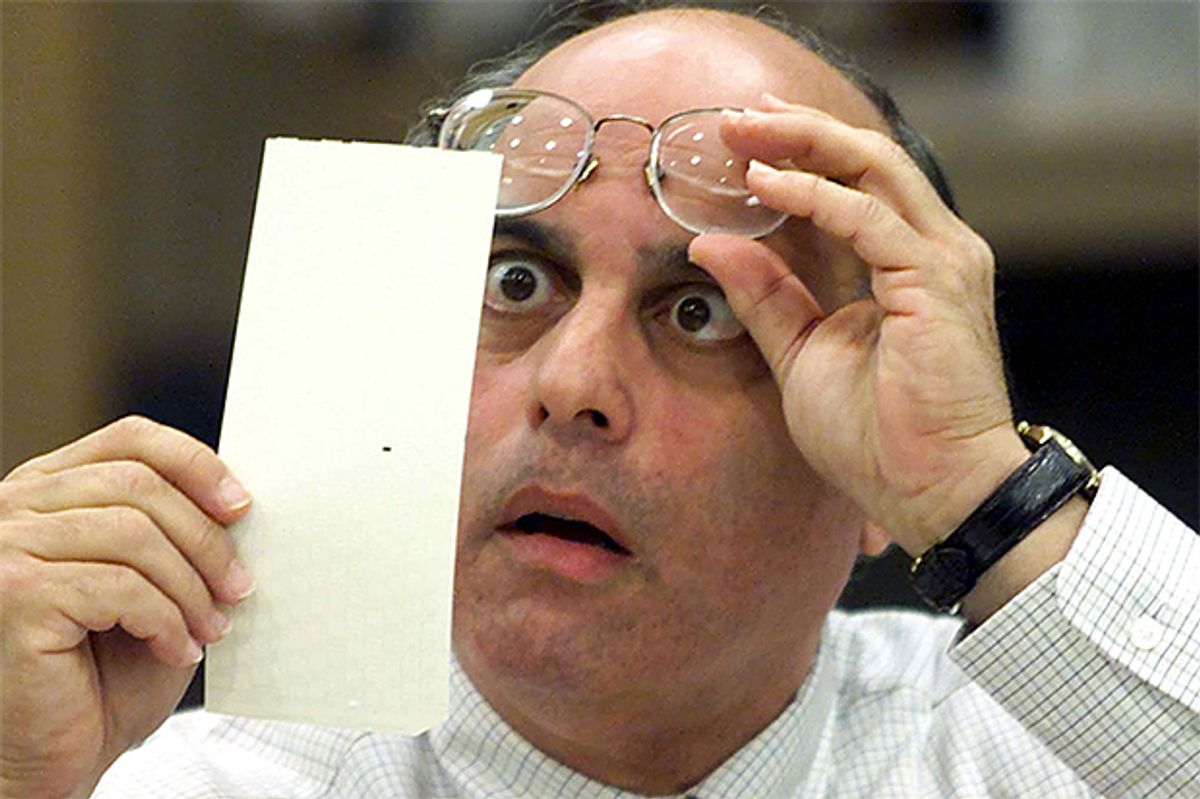 Donald Trump is not going to lose November’s election. But there is a good chance it will be stolen from him.

At least that’s the line the Republican nominee started pushing this week. At a rally in Columbus, Ohio on Monday, Trump told the crowd, “I’m afraid the election is going to be rigged, I have to be honest.” He repeated the charge to Sean Hannity, who at this point might as well be his official spokesman, and added that he hopes that “Republicans are watching closely or it’s going to be taken away from us.”

Trump was joined by his unofficial advisor, Roger Stone, a man who has never met a conspiracy theory for which he could resist fanning the flames. The day before Trump claimed in front of national reporters that the election might be rigged, Stone was telling radio host and noted conspiracy nut Alex Jones the same thing.

Left unsaid was who would be doing this rigging to take the election away from Trump and his merry band of supporters. That is an unimportant detail for the fearful masses to which Trump appeals. What matters is that once again, shadowy forces are conspiring to hurt America by denying her the president the people really want, and Donald Trump will lead the charge to keep that from happening.

This is not a new line of attack for Trump, who made similar claims about “rigged” elections when the GOP primaries were not going his way. In making it, he lays the groundwork for pre-emptively explaining his loss in November. Since Trump wins at everything and his campaign is predicated on how much America will “win” when he’s in office, he can’t admit to the possibility of losing fair and square. Someone must have stolen it from him.

This thinking puts Trump square in the tradition of the supporters of past Republican presidential losers. He has just taken their paranoia about shady Democrats with their “Chicago-style” dirty tricks and support of the biased mainstream media and made it one of his official talking points.

In the past, such talk was too undignified for a presidential candidate. So it was left to campaign surrogates and random crackpots. In 2012, for instance, there was Dean Chambers, a conservative activist who ran the website UnskewedPolls.com. Chambers became infamous during that campaign for claiming polls were weighted too heavily in favor of showing the electorate to lean more Democratic than it did. So he re-weighted them in a way he felt must have reflected the real electorate.

Chambers’s re-weighted polling numbers were actually much more modest than those of other conservatives, showing that Mitt Romney would pull out a narrow win in the Electoral College. When Obama instead crushed Romney, beating him 332-206 in electoral votes, Chambers had to admit he had been wrong. At least until he discovered he could blame his failure on voter fraud.

Chambers was not the only conservative who missed the boat in 2012. Karl Rove infamously melted down live on Fox News the night of the election, when the network called it for Obama. But what was notable was that the Romney campaign itself had apparently bought into the idea that the polls were skewed in favor of Democrats. Which led to shock inside the campaign on Election Night, when the results were rolling in and it became clear Romney had not only lost, but lost big.

Democratic-leaning voters have also cried foul over “stolen” and “rigged” elections as well. But generally, those cries have stayed on the fringes of the party. The vast majority of Bernie Sandes supporters, for example, seem to have accepted the results of this year’s primary despite some loud voices complaining the nomination was stolen from the Vermont senator by the rigging of the Democratic establishment. And in 2004 there were calls for contesting the general election results in Ohio over evidence of tampering with electronic voting machines that were alleged to have thrown the results in that crucial swing state to George W. Bush. But those calls never got any traction at the high levels of John Kerry’s campaign.

Compare that with the infamous election of 2000, when Republicans ran a disinformation campaign to convince the public that Democratic officials in Florida had their thumbs on the scale for Al Gore during a recount in Miami-Dade County. That allowed GOP operatives to pull off what became known as the Brooks Brothers riot, when khaki-clad Republicans stormed a meeting of election canvassers who were trying to perform a ballot recount. Eventually the recount was shut down.

Ironically, one of the leaders of the Brooks Brothers riot? Current Trump hatchet man Roger Stone.

So Donald Trump is not doing anything new or unusual in trying to pre-emptively question his loss in the election and, by extension, sullying the legitimacy of a Clinton win. And he will have plenty of help from organs of the Republican Party. Commentators on Fox are already making the case for voter fraud swinging the election to Clinton. The right-wing media will also happily stoke these fires.

What is new is the candidate himself being willing to indulge in claims of stolen elections almost three months before voting starts. That is a Rubicon that legitimates the fears of the GOP base and indicates that Trump will not go quietly into the night if he loses.

In other words, there is a solid chance this election will last well past Nov. 8.