Arizona's Lady Trump: Kelli Ward is running a Donald-esque primary challenge to John McCain — and she just might win

"I want to mix the mortar to fix the border": Kelli Ward talks to Salon about why's she's resonating with voters 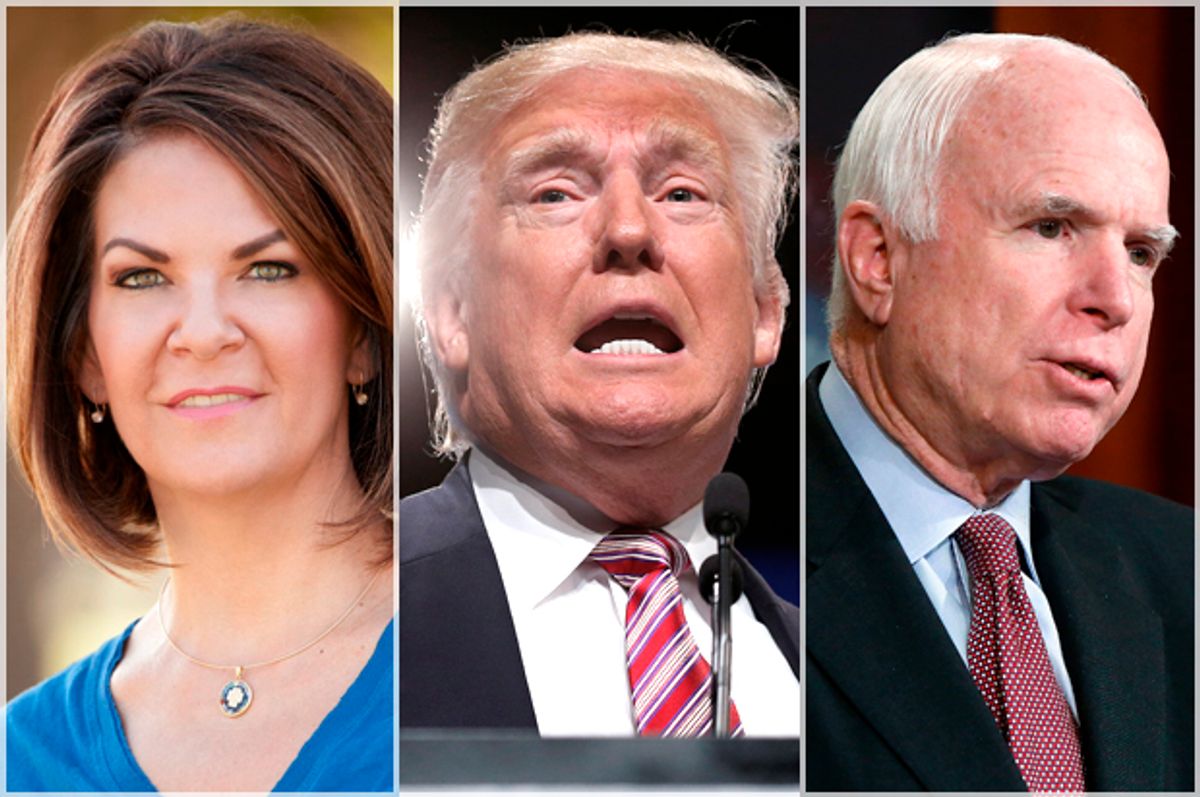 It's been a big week for Kelli Ward, John McCain's challenger in the Aug. 30 Republican primary. McCain offended the Trumpian base — which is particularly strong in Arizona — by criticizing Donald Trump's attacks on Khizr and Ghazala Khan, parents of a fallen soldier who have been denouncing Trump's anti-Muslim bigotry. Trump then returned the favor by refusing to endorse McCain, even though McCain is facing a competitive primary.

Enter Ward. The 47-year-old osteopath has been serving as a state senator in Arizona for four years and has been polling the strongest in a primary race against McCain. Now that one of the other challengers, Alex Meluskey, has dropped out, Ward is even better set to coalesce the anti-McCain vote behind her.

Ward doesn't believe that Trump's popularity is, as some might think, a cult of personality situation, but the result of a conservative revolt against the "political elite."

"He said things that many Americans were thinking," she told Salon in an interview Tuesday afternoon. Trump is "surfing" a wave of conservative anger and resentment, she explained, and she believes she is "at the top of the wave."

"I don’t want a political career," Ward claimed, smoothing over the four years she's already spent as a state politician. "I’ve got a great life as a wife and a mom and a family doctor, a person who gets to serve the people.”

So why run? Because Ward really despises — there is no other word for it — McCain.

“After he ran in the last primary and he walked along the border and he said build the danged fence and he went back to Washington, D.C.," Ward angrily explained of McCain, "he quickly joined the open borders crowd, the 'Gang of Eight' amnesty bill."

The "Gang of Eight" is a derogatory nickname that anti-immigration conservatives have for the bipartisan group of senators who attempted to pass immigration reform in 2013. Even though the bill would have made it extremely difficult for undocumented immigrants to get citizenship — forcing them to endure a 13-year, backbreaking process — the conservative base still saw it as "amnesty" and revolted, leading House Republicans to kill it.

Ward is running on a smorgasbord of Tea Party-style conservative issues: Guns, ending Obamacare, ending Common Core. But at the heart her campaign is, as is Trump's, about stoking anger and resentment over immigration.

“I want to mix the mortar to fix the border," Ward explained, before going on to paint a detailed picture of her goal of "an all-encompassing, all of the above approach" to militarizing the border with Mexico. (The Canadian border did not come up during the interview.) She went on to describe her vision: Concrete walls, fences, underground sensors, and cameras.

“And then we have to empower our Border Patrol to actually do their jobs," she said excitedly. "Their job is keep people from coming into this country illegally, not to welcome them with a basketful of goodies and a bus ticket from Phoenix to points unknown within the United States."

Ward had a lot of concerns about "goodies."

"We have to turn off the goodies" for immigrants, she argued. "And the goodies are jobs, free education, free health care, free housing, free babysitting."

Before I had a chance to question whether it was really true that undocumented immigrants are getting taxpayer-funded babysitting, Ward hastened to add that these are "the things people can get if they get here and get any kind of status. And many people who come here illegally are able to get status of some sort to be a burden to the taxpayer."

Ward shares more with Trump than his views on immigration over our southern border. Even though her website forefronts "Support for Our Military and Veterans" as a top three issue, Ward rushed to attack McCain taking the side of the Khan family over Trump.

"The Khan controversy is a cynical political stunt cooked up by the Clinton Establishment, and, sadly, John McCain has fallen right into it," Ward said in a written statement. "McCain's statement today makes clear that he really wants Hillary Clinton in the White House, and his tepid 'support' for Trump is only disingenuous pandering."

She went on to instruct the Khans to be angry instead at "Hillary Clinton and John McCain" who she argues "sent their son into an unnecessary war".  She accuses Clinton and McCain of having "fuzzy utopian ideals" that " have destabilized the Middle East and triggered a massive refugee crisis, which they want to import into the U.S. to fatten up the welfare rolls."

(Quick fact check: It was not actually Hillary Clinton and John McCain who invaded Iraq, as this press release suggests, but President George W. Bush, after breaking a promise to the Senate  to explore diplomatic options before resorting to war. Also, Clinton has offered 65,000 as the number of Syrian refugees she proposes taking in, which is a tiny fraction of the 4.8 million people who have fled the country.)

Ward, like Trump, is banking heavily on the notion that this populist form of conservatism, which is less about "small government" and more about stoking racialized resentments, will be the ticket to reinvigorating the Republican party.

“John McCain is the ultimate establishment insider. He’s the incumbent of incumbents," she said. “I think the reason he’s losing a reliably red state to a rubber stamp Obama Democrat is because of his poor voting record.”

McCain's approach this primary has been mostly to ignore Ward publicly, though his campaign did run an ad accusing her of wanting to spend "your tax dollars to entertain 'chemtrail' conspiracy theories."

McCain is not actually losing to his Democratic challenger, Rep. Ann Kirkpatrick, but the race is more competitive than it has been in the past, leading some Democrats to call for more party resources and attention to Arizona. But, as Politico reported, it's probably not because McCain is failing to suck up to Trump enough, but because Trump is hurting Republicans across the board.

"Trump is deeply unpopular among Hispanics, as is Maricopa County Sheriff Joe Arpaio, a prominent Trump ally," Theodoric Meyer of Politico writes. "And Arizona has a higher percentage of eligible voters who are Hispanic than any other battleground state."

Still, Ward is not wrong to think she has a chance at unseating McCain. There's very little in the way of primary polling in Arizona, but a May PPP poll showed McCain only pulling 39% in a crowded field of 5 candidates. Ward was coming in second, at 26%, with the others trailing behind in the single digits.

Twenty-six percent is low, but between McCain's low numbers and Trump's popularity with Arizona Republicans, it's easy to see how Ward, by aligning herself with Trump and attacking McCain, could pull off a primary upset over the Republican who has come to represent cowardice and compromise in the eyes of the right wing base. Winning the general election, however, is a different story altogether.