Trump's only chance is to keep the tally close enough on Nov. 8 to plausibly make the case for a rigged vote 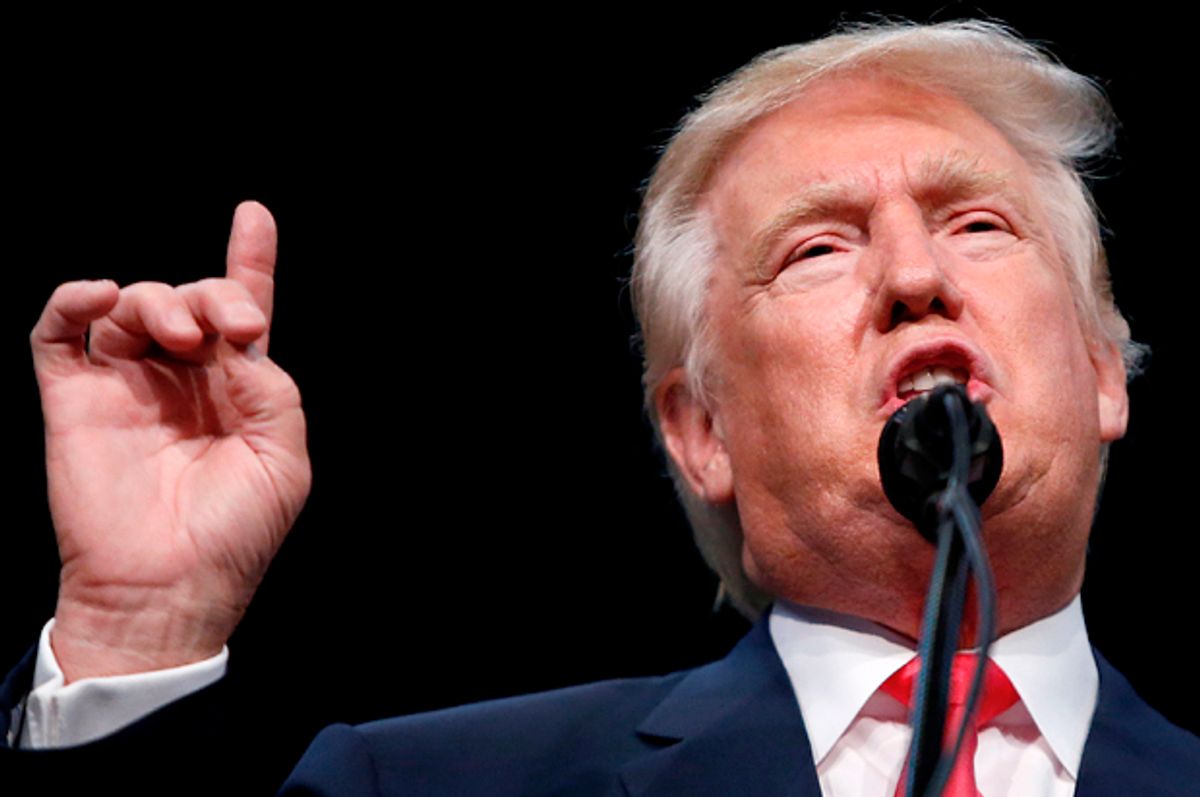 One of the informal norms of American presidential elections has long been that after the concession speech, the loser disappears for a while. Maybe, like John Kerry and John McCain, he goes back to work in the Senate. Or, like Bob Dole, he retires to a life of hawking Viagra and filming Pepsi commercials with Britney Spears. Whatever he does next, the smooth exit from the public eye and the peaceful installation of the new president are necessary reminders after a contentious election that America is a stable and functioning democracy.

Does anyone foresee Donald Trump gracefully exiting the stage if he loses on Nov. 8? Can you imagine him accepting the judgment of an exhausted nation that Hillary Clinton should be its next president, then ascending in the Trump Tower elevator back to his life of tanning sessions and filing for bankruptcy?

Of course not. And if current polls are accurate and the trends continue, his only chance is to get close enough to Clinton that he can plausibly claim that someone hacked a few voting machines or stuffed a few ballot boxes.

Which is why he’s laying the groundwork for legal challenges now with talk of a rigged election and voter fraud that will see Democrats somehow casting ten votes apiece for Clinton, among other nefarious schemes. If this kind of talk keeps his base riled up for the next three months, he can spend all of November and beyond complaining on Fox News and anywhere else that will listen that the election was “stolen” from him.

Just last week that Trump claimed the Republican primaries had been rigged against him, but he won by such huge margins anyway that the GOP couldn’t deny him the nomination. So it is hard to assume this is his usual off-the-cuff babbling. In this case, he knows what he’s saying.

He is being helped particularly by his hatchet man Roger Stone, who not coincidentally was partly responsible for the “Brooks Brothers riot” after the 2000 election that tried to shut down a vote recount in Miami-Dade County. Stone has recently appeared on conspiracist Alex Jones’s radio show to spout off about the possibility that the election will be rigged, and to warn of the dire consequences if Trump and his supporters don’t think the vote was handled fairly – “blood in the streets,” “civil unrest,” a “constitutional crisis.”

He might as well have told Jones’s audience, “Nice democracy you got there, America. Shame if anything happened to it.”

So what kind of mischief could Trump and his campaign get up to after Nov. 8? They could challenge results and demand recounts in close states, then try to interfere with those recounts, as Stone helped do in Florida in 2000. They could file lawsuits alleging voter fraud against election boards and Secretaries of State. They could whip up sentiment against electors, particularly against any who promise to never cast their electoral votes for Trump, as one Republican in Georgia has already promised to do.

Can’t you just imagine Trump in front of a bank of microphones on Nov. 9, spinning dark conspiratorial tales about “lots of people” telling him stories of undocumented Hispanics casting multiple votes for the Democratic candidate in some Miami precinct, or claiming “everybody knows” Baoky Vu once donated to the Clinton Foundation? Can’t you just imagine him yelling that “Crooked Hillary” stole the election from him, even if he loses by huge margins?

There is really nothing to stop him from making life miserable for everyone after that. The Republican Party will have no ability to rein him in, no one who can convince him that the election was on the up-and-up and he should call off his lawyers. The party’s leaders might want to concede the election and move on to drawing up their strategy of obstructing Clinton’s agenda in Congress and writing up the post-2016 autopsy. (Which will be hilarious.) But Trump has not listened to Reince Priebus et al. on anything for the last year. He’s not going to start now.

But more than all this – more than Roger Stone spouting inane conspiracy theories or battalions of lawyers with their depositions at the ready – is the unpredictability of his hardcore fans among the GOP base. For the first time, they have a presidential candidate who renounces the “political correctness” many feel has forced them to keep quiet while America, beset by Islamic radicals and Mexican migrants, drifted into a weakened state. For the first time, the social norms that kept certain dark impulses at bay, smoldering and resentful as their country was “stolen” from them with the assistance of feckless politicians from both parties, have been cast off.

If the people who felt this way thought they were close to electing a president who would do something about it, only to have that victory stolen away from them, what then? They will be cheering Trump on if he wants to fight in the courts and in the media. And there is nothing he likes more than adoring crowds. Putting those behind him goes against his essential nature. If he wants to drag this election out, he can do it. And unless he’s not just beaten but utterly buried on November 8, he probably will.