It's worth asking again: Is Donald Trump trying to tank his campaign? 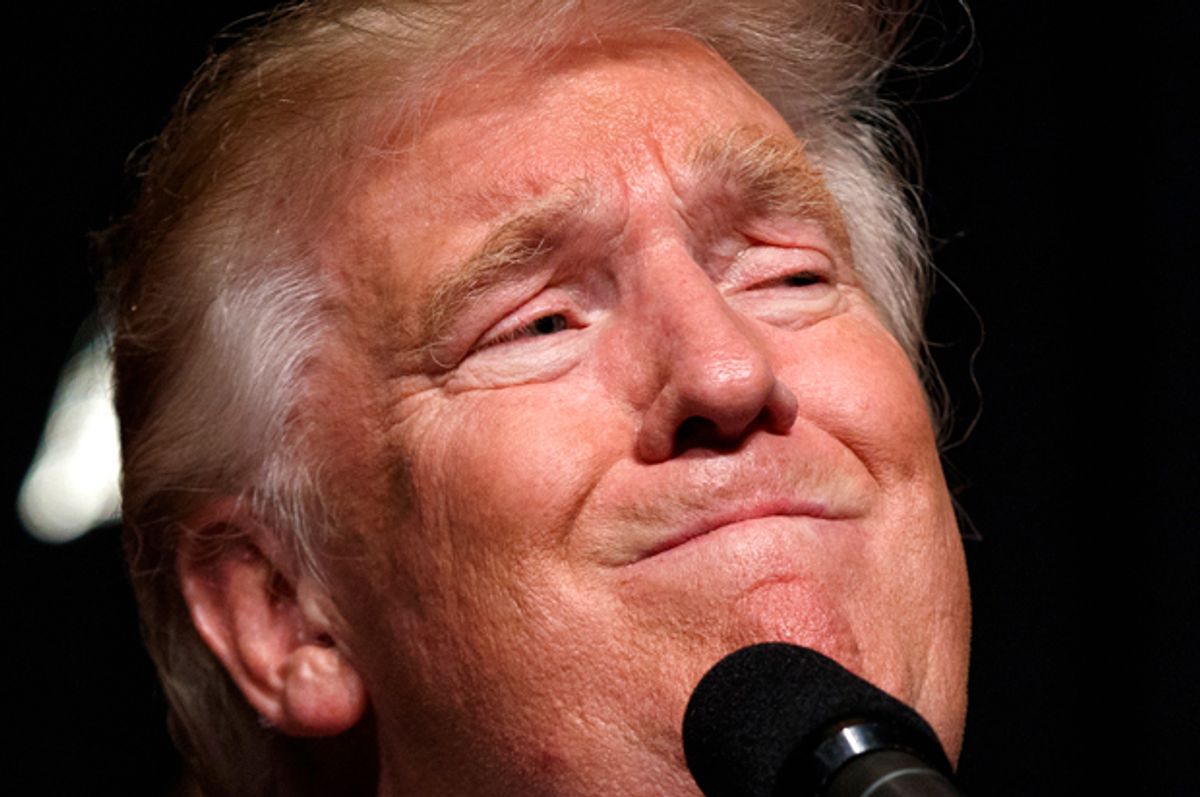 In the last two weeks, Donald Trump has slandered the family of a dead soldier, committed treason by inviting Russia to hack Hillary Clinton's email account, admitted he lied about receiving a letter from the NFL, saw an Air Force mother get booed at one of his rallies, claimed Russia wouldn't invade Ukraine even though they already have, refused to endorse House Speaker Paul Ryan's candidacy, falsely accused a fire marshal of limiting his crowd for political reasons, tossed a baby out of a rally, and called Hillary Clinton “the devil.”

That's as bad as it gets. CNN reports that even Trump's campaign staff feels “like they are wasting their time” at this point. John Harwood similarly claims a close ally of Trump's campaign manager Paul Manafort told him the veteran operative can't control his candidate and is now “mailing it in.”Joe Scarborough, the conservative commentator, earnestly questioned Trump's “mental wellbeing” on the his show Wednesday morning. “There is nothing rational about this behavior at all,” Scarborough said. “It's as if he's trying to blow himself up.”

Four months ago, several observers floated the idea that Donald Trump was a self-saboteur. “To all outward appearances,” John Fund wrote in The National Review, “Trump seems to be engaged in a form of self-sabotaging behavior in which people both move toward a goal and then from deep within do things to defeat themselves.” This was a fair question at the time. Trump showed no interest in the mechanics of campaigning. He showed even less interest in policy. And he continually undermined his campaign with needlessly offensive gaffes.

A few days before Fund's piece was published, Stephanie Cegielski, former communications director of the pro-Trump super PAC Make America Great again, ran an open letter to Trump supporters. In it Cegielski argued that Trump was, in fact, a self-saboteur. “I don't think even Trump thought he would go this far,” she wrote, “and I don't even know that he wanted to, which is perhaps the scariest prospect of all...What was once his desire to rank second place to send a message to America and increase his power as a businessman has nightmarishly morphed into a charade that is poised to do irreparable damage to this country.”

More to the point, Cegielski added: “I believe Trump senses he is in over his head and doesn't really want the nomination. He wanted to help his brand and have fun, but not to be savaged by the Clintons if he's the candidate. He wouldn't mind falling short of a delegate majority, losing the nomination, and then playing angry celebrity victim in the coming years.”

That last point about losing and playing the victim is critical. Trump is already working to seed the narrative. “I'm afraid the election is going to be rigged, I have to be honest,” he told supporters at a rally in Ohio on Monday afternoon, referencing fanciful reports of voter fraud. The next day, in Virginia, he repeated the claim: “We gotta beat a totally dishonest machine...We're running against a rigged system, and we're running against a dishonest media.”

This is a no-lose strategy for Trump. His core audience is disposed to distrust the media and all things establishment. By implying the system is rigged against him now, he delegitimizes the process in the minds of his voters, who clearly don't care about the facts and thus won't flinch when they're told voter fraud is a mythical problem. An ongoing study by NYU's Brennan Center for Justice, for example, found that “an examination of voter fraud claims reveal that voter fraud is very rare, voter impersonation is nearly non-existent, and much of the of the problems associated with alleged fraud in elections relates to unintentional mistakes by voters or election administrators.” But this is really beside the point.

Trump has lied with impunity since he launched his non-campaign, and it hasn't mattered one bit. He appeared on Sean Hannity's show Monday night and said, “I've been hearing about it [voter fraud] for a long time. I know last time you had precincts were there were practically nobody voting for Republican and I think that's wrong...people were curious, how is it possible?” Like his claim that “thousands” of Muslims were rejoicing in the streets after 9/11, this is total bullshit. Is there any doubt Trump plucked this imaginary memory out of the ether? If a journalist was in the room, she would've asked which precincts he was referring to? Instead, Hannity, a consummate hack, mumbled a one-word response: “Absolutely.”

There's no good reason to suppose Trump wants to be president. Running for president? Sure. That's a path to political celebrity. But he's given no indication that he's serious about doing the job. He doesn't know what a presidential candidate has to know, and he's doesn't care that he doesn't know. He even implied to John Kasich's adviser that his VP “would be in charge of domestic and foreign policy.” That's essentially the entire job of the president.

Trump is a little man with a big ego who likes the idea of being president but wants nothing to do with the responsibilities that entails. I suspect this was always about him – his brand, his fame, his business. That he's made it this far without a plan or a vision or a plausible defense of his candidacy has to be a shock even to Trump. The best possible outcome now is for him to lose without appearing to quit. Then he can retreat to the world of entertainment with an inflated celebrity and a legion of alienated supporters convinced their hero-charlatan was wronged by a corrupt system.

If this isn't what Trump has in mind, the only other explanation for his self-destructive behavior is that he's completely unhinged. Which, I confess, is entirely possible.