As Aetna and Humana bail on the Affordable Care Act, it's private profit vs public need. Guess which wins out? 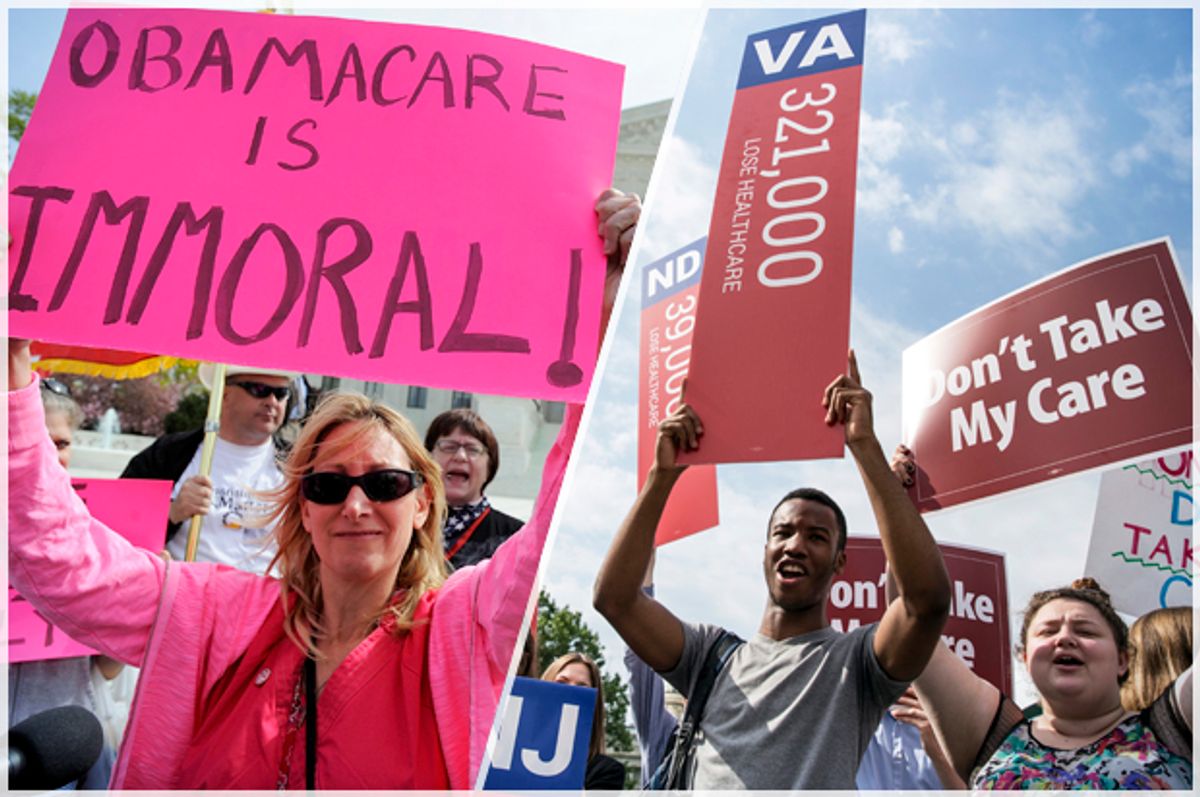 Congressional Republicans have tried in vain over the years to repeal or overturn all or part of the Affordable Care Act — President Barack Obama’s keystone legislation that has given more than 20 million Americans health insurance coverage in the world’s costliest health care market — since it was signed into law in 2010. But where GOP has failed time and again, private insurers may be succeeding.

In the past two days, Aetna and Humana, two of the country’s five largest health insurers (they're currently involved in merger negotiations), have announced they’re pulling out of Obamacare’s public insurance exchanges — a key component of the legislation aimed at reeling in costs to Americans not covered by employer policies or otherwise unable to afford premiums and other expenses.

Humana, the country’s fifth-largest insurer by revenue, said Wednesday in its quarterly earnings report that next year it will cover “no more than 156 counties, down from its 2016 presence in 1,351 counties.” It’s pulling out completely from four of the 15 states in which it’s currently participating. (A call to a Humana spokesman asking to clarify which counties were spared and what criteria was used to selected them was not returned.)

Only a day earlier, Aetna, the country’s No. 3 insurer, announced it was re-evaluating its involvement in exchanges in 15 states and dropping previously reported plans to expand its coverage via exchanges. “We believe it is only prudent to reassess our level of participation on the public exchanges,” Mark Bertolini, Aetna chairman and CEO, said in a conference call with analysts on Thursday. “Our initial action will be to withdraw our 2017 public exchange expansion plans.”

They both follow the path set by UnitedHealth, the nation’s top health insurance provider, which announced in April that it would be exiting most Obamacare exchanges in 2017. Other major insurers have made similar announcements, citing customer bases that are too sick and too costly to insure.

A Blue Cross Blue Shield report earlier this year said enrollees in the company’s individual exchange plans, “have higher rates of certain diseases such as hypertension, diabetes, depression, coronary artery disease, human immunodeficiency virus (HIV) and Hepatitis C.” And yet this was all expected, Obamacare proponents point out, since a disproportionate number of exchange enrollees would have been denied coverage for pre-existing conditions pre-Obamacare.

The problem, both insurers and Obamacare boosters agree, is that fewer than expected healthier  customers (i.e. those with a lower cost of care) have enrolled in the individual exchanges, which means their ranks consist largely of lower-income self-employed workers and those hovering near the line that qualifies them for Medicaid.

Part of the issue is that these exchanges are still new and the majority of insurers have yet to figure out how to make them profitable. The most successful companies operating in these exchanges, such as Molina Healthcare and Centene, are those that been handling Medicaid managed-care plans and who have experience with the state and federal program that covers the poorest among us.

“If you look at the insurers that are expanding on the exchange and those that are not, they tend to serve very different markets,” Mireille Jacobson, director of the Center for Health Care Management and Policy at the University of California, Irvine, told Salon via email. “My impression is that the insurers that are more familiar with lower income consumers are the ones expanding, e.g., Molina in my neck of the woods. They have more experience with these customers and have established provider networks to serve them.”

The exodus of major insurers from Obamacare business could result in several outcomes. One is allowing more people to qualify for Medicaid subsidies and raising rates — putting the ACA's gains and long-term prospects at risk. Or perhaps there will be an influx of younger, healthier Americans opting in to the exchanges and bringing costs down. Or the government could intervene and impose health care price controls and/or a single-payer system. Those last two options are unlikely to happen anytime soon given the political climate in the country and the fact that the GOP seems assured of retaining control of the house, if not the Senate, this November. So it appears these fleeing insurers are making once dubious claims that the ACA will lead to higher health care costs look prophetic.

The reasons health insurance companies cite for pulling out of the Obamacare deserve a little scrutiny. Insurers have pointed to the money they've lost by participating in the exchanges. It's worth noting, however, that these companies have earned billions of dollars in profits, and the Obamacare mandate — which penalizes those who don’t buy insurance — has given them a much larger customer base and contributed to those handsome profits.

Take Aetna as an example: Since the 2012 ruling in which the U.S. Supreme Court upheld Obamacare’s constitutionality, Aetna’s profits have grown 32 percent, its revenue has doubled to more than $60 billion and its stock has gained nearly 180 percent. Humana’s stock price has grown by nearly 120 percent over  the same period. UnitedHealth’s shares have grown 142 percent.

The hard truth about Obamacare (and about health care around the world) is this: nobody makes money extending health coverage to large numbers of poor customers — even the success stories are working with customers who receive government subsidies. Even so, it's clear the ACA isn't killing the health insurance giants — too bad they don't seem inclined to return the favor.