PHOTO ESSAY: Inside #ShutDownCityHallNYC, where the Movement for Black Lives is holding an Occupy-style protest 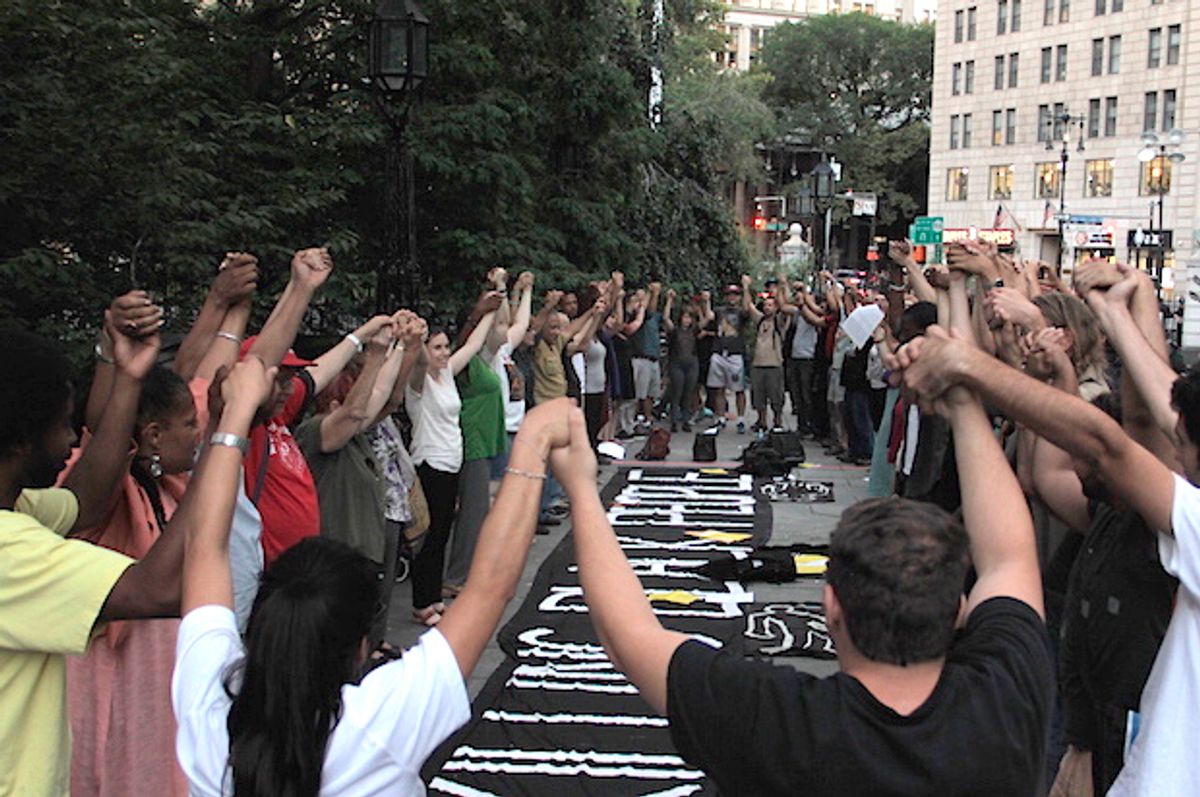 Revolution is in the air again in New York City.

Five years after the launch of Occupy Wall Street, activists have begun a new occupation. This is not Occupy 2.0, however. This protest, stationed at a park across from City Hall in lower Manhattan, was organized by the Movement for Black Lives.

On Aug. 1, activists built an encampment at City Hall Park, using the name #ShutDownCityHallNYC. They have dubbed the reclaimed space Abolition Square.

"Our goal is to accelerate a split in the Movement for Black Lives between reform and abolition, and to make that split public," explained Joel Northam, a member of Millions March NYC who co-wrote the Shut Down City Hall NYC orientation guide.

"We are abolitionists, not reformists," Northam emphasized to Salon. "And we will continue the occupation until they meet our demands." The activists have three primary demands.

First is an end to "Broken Windows" policing. This is a strategy that was spearheaded by former departing NYPD Commissioner Bill Bratton. It targets low-level crimes and minor infractions in an ostensible effort to stop larger crimes. In practice, it has very disproportionately targeted communities of color and poor people, effectively criminalizing their lives.

The protest orientation guide noted that Broken Windows is reminiscent of a strategy described by Frederick Douglass in 1845, who said a slaveowner's "plan was to whip for the smallest offenses, to prevent the commission of large ones."

Second on the list of demands is reparations for victims of police brutality. The protesters also stipulated that the money for reparations should come from NYPD funding, and should not be taken away from other social services.

There is a precedent for this demand. In 2015, after years of campaigning by activists, the city of Chicago agreed to pay $5.5 million in reparations to survivors of police brutality.

Third of the demands is the defunding of the NYPD's $5.5 billion annual budget and the reinvestment of tax dollars in Black, Brown and working-class communities.

The protesters say the NYPD is an undemocratic and racist institution. They say they want community-based forms of policing in its place that are accountable to residents. Several groups joined the coalition to help organize the protest, but Millions March NYC was the main force behind the call.

Nabil Hassein, an organizer with Millions March NYC, has overseen logistics for the demonstration. He emphasized that all of the groups that are participating are abolitionist groups, not reformist ones.

"We have really highlighted the divide between reform and abolition," Hassein said. "We want to strengthen the abolitionist voice in the Movement for Black Lives."

"We have many internal political differences," he noted, but said they are united in their push for the demands.

The demonstration has a local focus, Hassein said, but he drew ties between similar protests in Chicago and Los Angeles and beyond.

In Chicago, activists are occupying an abandoned lot across from what has been described as a police “black site,” where more than 7,000 detainees, the vast majority of whom were Black, were "disappeared." They renamed this space Freedom Square.

At the encampment, there were also many signs, banners and chants expressing international solidarity, with Puerto Rico, Palestine and more.

Joel Northam stressed that Shut Down City Hall NYC is part of an international movement, noting that, in Puerto Rico, activists have participated in an encampment protest for months against the PROMESA bill, which will impose an undemocratic, colonial-style control board on the U.S. territory. Nelini Stamp, an organizer and activist involved in the occupation, told Salon she was most excited about the demand for reparations.

"We are in the middle of a breakthrough on reparations," she said. "The original sins in this country are slavery, and by extension Jim Crow," she added, and Black Americans still have not been able to recover from these extreme, systemic injustices.

"Victims of police brutality should have reparations," Stamp stressed. She said these reparations should come in the form of free social services.

When Stamp heard the call to action issued by Millions March NYC, she knew she had to be a part of it.

"I believe we can abolish the police state," she explained. "We can stop police militarization." Stamp called for more community control over police, for "allowing people to democratically control their communities."

This police state, however, Stamp noted, did not just emerge on its own. "It is fueled by capitalism," she said. "Corporations are making money off of cameras, LRADs, weapons and more."

"Racial aspects need to be at the center, but capitalism must be challenged," she emphasized. "People are making money off the killing of Black people, and we need to talk about that."

New York City, meanwhile, is the perfect place to start, Stamp argued. "The NYPD is the largest police force in the country; we are in the belly of the beast. And Broken Windows policing has been exported throughout the country."

Like the others, Stamp noted Shut Down City Hall NYC is not Occupy Wall Street Part II — although she supported the Occupy movement. "I love a good occupation," she laughed, "but this is different."

This action is part of the Movement for Black Lives, and is centered on the struggle of communities of color, she noted. "I'm excited about what this occupation brings to the conversations in our communities."

Stamp compared what poor communities of color are living through to the novel "The Hunger Games."

"Believe Black and Brown people when they say they don't trust the police," she said. "I love dystopian novels, and I feel like I'm living in one sometimes." Shut Down City Hall NYC has several democratic committees responsible for overseeing affairs — a logistics committee, a tactical committee and others. It holds regular meetings and assemblies where larger decisions are made.

In some ways, the protest is reminiscent of Occupy Wall Street, and many of the participants were themselves previously involved in Occupy. But Nabil Hassein said it is important not to think of the as an extension of Occupy.

The struggle against systemic racism and police brutality "is much, much older than the Occupy movement," he stressed. And the encampment tactic has been used by activist groups throughout the world for many years.

"The main focus is community-building," Hassein said. "We're providing a space for activists."

"We learned from Occupy," explained Joel Northam, who was deeply involved in Occupy, "but the movements are different."

Millions March NYC and other groups in the coalition planned the encampment for about a month, and put out a call a few weeks before. But the occupation is just one part of it, Northam said.

"The really important stuff is in the ground work that happens in the interim," he emphasized. Protesters will pursue a diversity of tactics.

Overall, the attitude among the Shut Down City Hall NYC activists is that the Black Lives Matter movement has come to a crossroad, and members must decide on one of two paths: a reformist approach that works within existing NGOs and the Democratic Party, or a revolutionary abolitionist approach that demands the creation of new institutions and the dismantlement of old ones.

The activists in NYC have chosen the latter, and say they will not leave until their demands are met.

Their most basic demand has in fact already been met. On the day the protesters launched the encampment, NYPD Commissioner Bratton announced he's stepping down in September. The timing was certainly strange, but Bratton will be entering a new job in the private sector where he will be paid handsomely.

The protesters have little faith that the next police commissioner, James O'Neill, will be much better.

O'Neill "was appointed by Bratton and he carried out all his directives gleefully," Northam said. "The NYPD is still the NYPD."

Northam pointed out that Bratton himself has acknowledged the racist origins of police. In 2015, Bratton spoke at a Black church, where he admitted that "the worst parts of black history would have been impossible without police."

"Slavery — our country's original sin — sat on a foundation codified by laws and enforced by police, by slave catchers," the former NYPD commissioner told the primarily black audience.

When asked if there was anything else he wanted to add, Northam said, "Fire James O'Neill."

"And replace him with no one." Many of the protesters spoke of the demonstration as "horizontal" and "leaderless."

"It's a leaderless community," explained Jocelyn Perry. "Black and Brown people are at the forefront of any movement, but this movement is based on a structureless basis."

Perry told Salon the new protest gives her hope for the future.

"I'm an activist first," she said, noting she has been involved in struggles for many years. "The movement has been going on for a long time. Racism is deeply institutionalized here."

Perry said she has been protesting racist police brutality for more than 20 years. She recalled protests after the death of Nicholas Heyward, a 13-year-old killed by a police officer in 1994. Heyward had been playing with a toy gun — just like 12-year-old Tamir Rice, who was gunned down by a police officer in Cleveland in 2014.

"Every one of our demands will be met," Perry insisted with confidence. When they heard Bratton was stepping down, she said they cheered, although they have much more work to do.

The most exciting thing about the protest, Perry explained, was how it centers reparations as a primary goal and how it is building a community.

Police must be held accountable for their impact on black and brown communities, Perry stressed. "Reparations are not defined by the perpetrator; they're defined by the survivor."

She called for transferring funding from police to education and health care. She also said police should not be in schools, where they are intimidating children.

Perry said the protesters have been getting decent media attention, from both local and national outlets, and have no intention to leave anytime soon. The atmosphere at the occupation is one of calm and community. Yet there is a fiery spirit in the air. The meetings are full of dedicated people, from a diverse array of backgrounds — and are periodically interrupted by "mic checks," in which the crowd collectively echoes a speech of one person. During one meeting, a man suddenly shouted out, "Down with respectability politics!"

Salon also spoke with some of the members of a new group called Labor for Black Lives. The organization, which just had its second meeting at Shut Down City Hall NYC, consists of a coalition of rank-and-file members of several different unions who hope to unite the struggles for workers' rights and racial justice.

People wander in and out of the encampment. A man with a "Black Lives Matter — Bernie" T-shirt, who asked to be identified simply as "an anonymous person," was walking around the encampment at various different times handing out printed copies of a letter calling for an end to "the use, manufacturing, sales, and finally phased destruction of all weapons of war."

He stressed, "In addition to the drastic reduction in the death and destruction committed with weapons of war, imagine what we can achieve with all of the money and manpower (and woman-power) saved from those wasted on research and production."

"The resources could be used toward free health care, free college education, affordable housing, guaranteed basic income, etc., for all," he added.

There is a firm sense of solidarity in the group, and an aspiration that things can and will get better, but only through struggle.

At the end of their meetings, the Movement for Black Lives activists all stand up, hold hands and collectively recite a quote from revolutionary Black Panther leader Assata Shakur: