Donald Trump and the Tea Party myth: Why the GOP is now an identity movement, not a political party 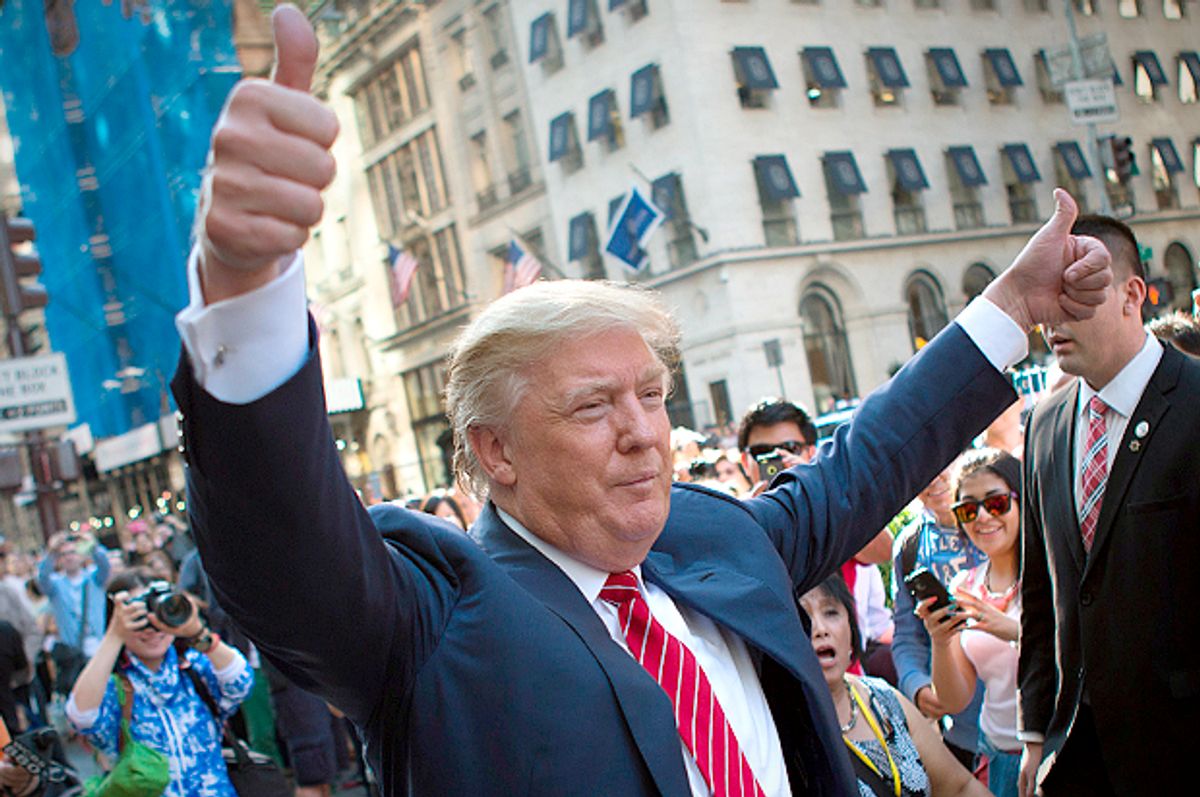 In 2009, shortly after America elected its first African-American president, the Tea Party was born. The movement was sold as a grassroots explosion of conservatism. Middle America had had enough. Big government spending was out of control. The debt was a national crisis. We were bankrupting future generations of Americans. That none of these people were troubled by the previous 8 years under George W. Bush was more than a little suspicious. After all, it was Bush who dumped trillions of dollars into unwinnable wars. It was Bush who added nearly $6 trillion to the debt. It was Bush that signed the first bank bailout.

But when Obama was elected, fiscal conservatives found religion.

It was always clear the Tea Party had nothing to do with policy or ideology. It wasn't about spending or ObamaCare care or entitlements or state tyranny. This was a myth propagated by the silent financiers of the movement. The Tea Party was mobilized by the groups Americans for Prosperity and Freedom Works, both of which were financed by the Koch brothers. Indeed, these groups were formerly a single organization called Citizens for a Sound Economy, which was founded in 1984 by the Kochs.

The Kochs created the first national website for the Tea Party and used the group to promote their Randian free market fetishism. But the movement itself had almost nothing to do with economics. On the ground, it was obvious this was about something broader, more fundamental. These were mostly white people (89 percent, in fact) reacting against cultural change. 75 percent of Tea Partiers were 45 years old or older, and 60 percent were men. They were united by a nebulous cocktail of ethnocentrism and white nationalism. A black man was president and they suddenly wanted to “Take the country back.”

The sentiments let loose by the Tea Party never went away. They've festered for eight years. Last year, Donald Trump read the political winds and set sail on this sea of cultural angst. Lest we forget, he launched his campaign by embracing birtherism, and he rocketed to the top of the Republican polls. “This is the day we take our country back,” he told supporters back in February. It was never explained what that phrase meant, but the slogan implied the answers. For the “silent majority” at least, it was well understood.

Trump's nomination has brought the GOP's race problem to a head. The Tea Party is the Republican Party. The fringe is now the base, and the base is neither conservative nor ideological. As I noted Thursday, political science research shows that Republicans, despite being more likely to hold racist beliefs, have rarely voted on the basis of those beliefs – not consciously in any case. But that changed with Trump. Racial enmity appears to be the motivating factor among his supporters. The only other comparably strong predictor of Trump support is anti-Muslim attitudes. There is, in other words, no pretense of conservatism. Trump voters are impelled by race and nativism.

If you're not convinced ideology is irrelevant, consider Trump's new infrastructure plan. As my colleague Simon Maloy pointed out, it's a trillion dollar government stimulus program. Conservative writer Jonathan Tobin rightly compared it to Obama's stimulus package, only bigger and, presumably, more socialist. In an appearance on the Fox Business Network, Trump claimed that Hillary Clinton's $275 billion dollar infrastructure plan was only “a fraction” of what's needed. Of course, he's been short on specifics, and to the extent that he's explained his proposal, it makes no sense. The point, though, is that none of that matters. You won't hear Trump voters complain about it and you won't hear his Republican apologists calling him a liberal statist. Once again: ideology has been reduced a prop.

If Tea Party conservatives (most of whom support Trump) gave a damn about spending, they'd denounce this “big government” monstrosity. But their fealty to Trump is untouched by policy. If Obama were to propose anything like this, cries of tyranny would echo at Trump rallies. With Trump, however, it's a non-issue.

Trump's ideological heresy goes beyond spending. Recall his open hostility to free trade, a sacrosanct principle among conservatives. If Trump wasn't riding this wave of racial resentment, I suspect we'd hear a lot more about his protectionism. But the base hardly noticed it. They don't care about free trade any more than they do limited government, which is to say they don't care about conservatism. Trump may be ideologically incoherent, but he's signaled that he's with his supporters on the cardinal issue – racial identity. Everything else is noise.

Now the Republican establishment has a crisis it can't contain. By bringing the racial resentment out into full view, Trump has cut through the veneer of conservatism that concealed the driving force of Republican politics.

The cultural hysteria is all that's left.