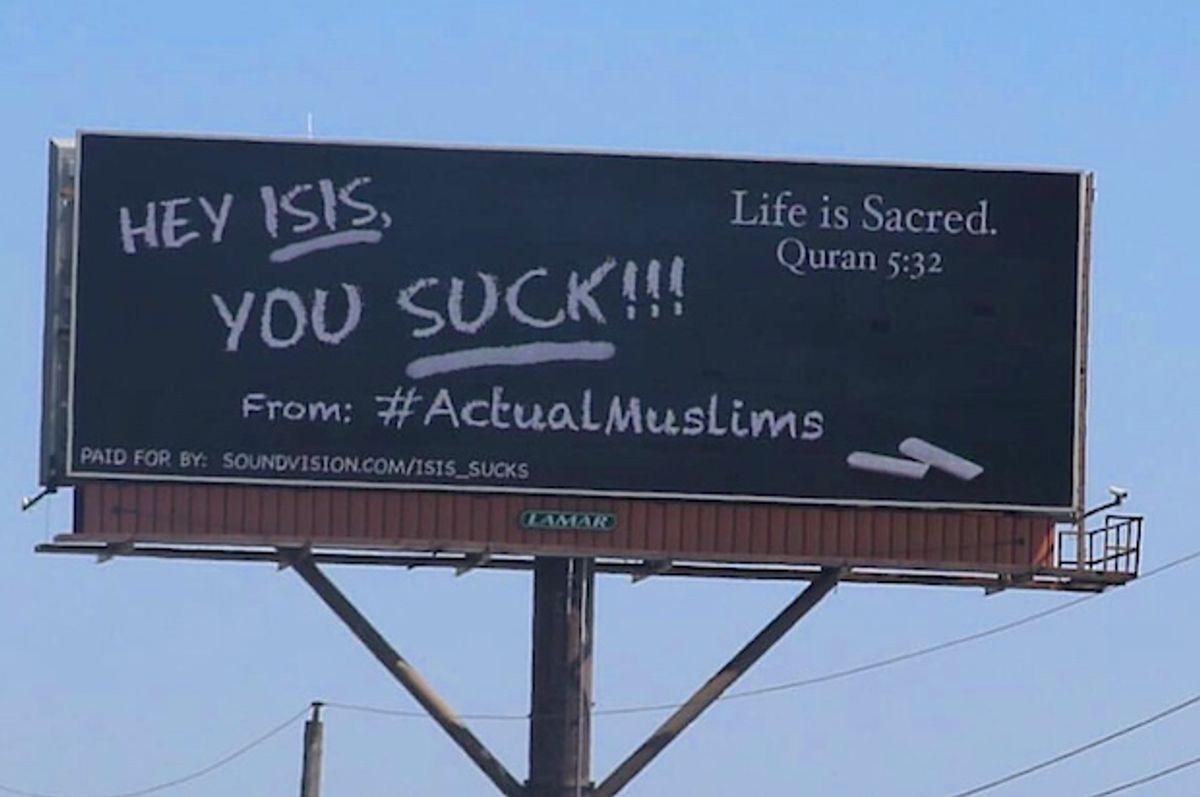 People driving down the highway in Chicago may be met with a giant billboard reading, "Hey ISIS, you suck!!! From: #ActualMuslims."

The billboard is part of an "ISIS Sucks" campaign, launched by a Muslim American non-profit organization.

The Sound Vision Foundation bought the billboard as part of a larger strategy to challenge extremism and Islamophobia.

"We launched the campaign in light of the constant pressure on American Muslims to condemn ISIS, especially since Muslims are the biggest victims of ISIS," explained Leena Suleiman, the director of creative engagement at Sound Vision.

"The statistics speak louder on how ISIS' main target is Muslims than anyone's opinion or feelings about the situation," Suleiman told Salon.

"That's been a huge problem in the media," she continued. "The very fact that ISIS is a menace to humanity, and foremost to Muslims, and not just to people of other or no faiths, is a huge piece of the puzzle that is consistently and unfortunately overlooked."

The vast majority of the victims of ISIS are themselves Muslim. And most of the soldiers fighting ISIS in Iraq and Syria are also Muslim.

Sound Vision is a non-profit organization that says it "provides Muslims with thinking and talking points to manage crisis, to fight against Islamophobia and to challenge extremism and radicalism among Muslim youth."

The foundation has published several brochures and articles opposing what it calls "ISIS' anti-Islamic practices." In its "ISIS Sucks" campaign, it describes the self-proclaimed Islamic State as "the terrible terror to the world."

Suleiman said the billboard "is also an expression of real human frustration at trying to live peacefully while being associated with a menace that wreaks havoc on mostly other Muslims."

The billboard is located on Northbound I-294, roughly half a mile north of Chicago's North Avenue.

Suleiman highlighted how Islamophobia and extremism both feed each other.

"Extremism, when done in the name of a religion, creates the image that the religion itself is perpetuating and encouraging violence against innocent people, although there is no such religion. This then produces a phobia against that religion, and in this zeitgeist, that religion happens to be Islam," she explained.

As Salon has previously reported, ISIS has explicitly said that one of its goals is to destroy what it calls the "gray zone," or the space in which Muslims are accepted in non-Muslim-majority societies. Anti-Muslim hate, then, only plays into the hands of extremists.

"Islamophobia begets extremism and vice versa," Suleiman said. "On a local scale, when an Islamophobe starts otherising Muslims, this can make a Muslim feel unwelcome in his or her own country."

"On a global scale, Islamophobia gives fuel to and 'legitimizes' the angst that extremist groups feel, which is converted into a violent ideology, however baseless and harmful," she added.

Sound Vision is by no means the only Muslim group that has launched an anti-ISIS campaign. Many others have done the same.

In 2014, hundreds of Muslim leaders and scholars co-signed an open letter to so-called Islamic State Caliph Abu Bakr al-Baghdadi, detailing how his extremist group violates the fundamental precepts of Islam.